Moscow: Violent protests and allegations of vote-rigging have pushed the former Soviet nation of Kyrgyzstan to the brink of its third revolution in 15 years, without a clear opposition leader in sight.

The landlocked nation of 6.5 million, often described as Central Asia's only democracy, woke up on Tuesday to a political vacuum after opposition supporters seized government buildings, scores of top officials resigned and the country's president was nowhere to be seen. 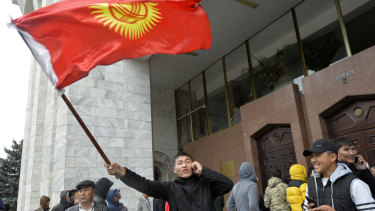 Protesters gather in front of the government headquarters on the central square in Bishkek, Kyrgyzstan.Credit:AP

Monday's unrest, which threatens to topple the incumbent leader, President Sooronbai Jeenbekov, would be the country's third revolution since 2005.

Thousands of protesters, angered by reported vote-rigging at Sunday's parliamentary elections, took control of the city early on Monday, local time, after riot police clashed with demonstrators who surrounded the seat of power and fired rubber bullets at them. Nearly 700 people were injured, 100 were admitted to hospital and one person died, according to the Kyrgyz health ministry.

On Tuesday morning, protesters seized the main government building and occupied the president's office, trampling on his portrait.

Kyrgyzstan's election body then scrapped the results of Sunday's parliamentary elections, which were tainted by multiple reports of vote-buying, saying that its decision was driven by an effort to "prevent tensions" in society. 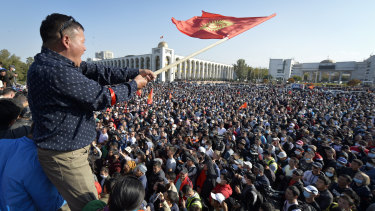 People protest during a rally against the results of a parliamentary vote in Bishkek, Kyrgyzstan.Credit:AP

The early results handed the majority of seats to two leading parties, including one backed by the president.

Outside the presidential administration building, a group of young men with metal bars stood guard on Tuesday afternoon to "stop further looting". The motivation of the protesters varied.

Many of the young men who stormed the government headquarters and freed former president Almazbek Atambayev from prison appear to have been bussed in, with speculation they might have been paid.

However, many young Bishkekers are more idealistic. Meder, 20, who only gave his first name, went to the main square in Bishkek to have a look at the damage from the night before. "Young people are here as we want old men out – we want young people and women in," he said. "We want peaceful meaningful change."

The whereabouts of Jeenbekov was unknown. In a recorded video statement posted on his Facebook page, he accused "certain political forces of trying to seize power".

The Kremlin was cautious with its comments, saying it was concerned about the unrest. "We hope all political forces in Kyrgyzstan will find the strength to follow the constitution and find a solution from the current impasse soon."

The country's opposition, however, does not appear to have one unifying leader. Kyrgyzstan's parliament has split into two factions which convened at two different locations in Bishkek.

The larger faction voted on Tuesday to appoint nationalist politician Sadyr Japarov as prime minister. He fled the meeting before an angry mob armed with stones stormed the building.

Regional governors, mayors and other top officials tendered their resignations yesterday, making it increasingly unclear who was in charge.

Kyrgyzstan's second-largest gold mine was ransacked and set on fire yesterday afternoon, the mine's owner said.

Frank Miller’s 'Sin City' TV Show in the Works: Why Fans Shouldn’t Get Too Excited Just Yet

Here’s Where The Challenge: Double Agents<\/em> Filmed Amid the Pandemic