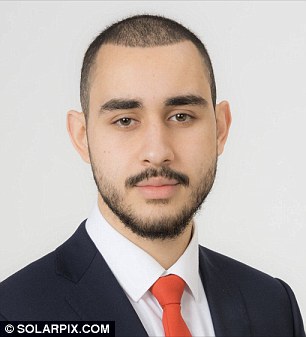 Tolga Aramaz, 23, is in critical condition in hospital after falling from the second floor of an apartment block in Ibiza early on Thursday

A Labour party councillor has been critically injured after plunging from a second-floor apartment in the Ibizan party resort of San Antonio while on holiday.

Tolga Aramaz, 23, the Labour Party representative for Edmonton Green in the London borough of Enfield, was admitted to the intensive care unit of a private hospital in Ibiza shortly after 1am on Thursday.

Sources at the Nuestra Señora del Rosario Clinic have described his condition as ‘delicate’ and say he has multiple trauma injuries.

Tolga, a former student of Kings College, is understood to have been with friends when he fell.

He landed on a restaurant awning which cushioned his fall before ending up on the eatery’s terrace in the popular holiday resort of Playa d’En Bossa.

Police are investigating but say they believe the incident was an accident and there is no evidence of any foul play.

Tolga, a member of Unite, was elected as Labour Party representative for the Edmonton Green ward in May with 2,629 votes.

He said afterwards: ‘Thank you for all that has voted for me. I am now the first elected representative in my family and that gives me great pride.

‘I will serve my residents to the best of my ability and me and my comrades will aim to protect the interest of the many not the few.’

Tolga’s social media accounts show him to be a supporter of Labour leader Jeremy Corbyn and he has also used Twitter to criticise Brexit negotiators.

Tolga announced in February he was standing as an Enfield councillor. 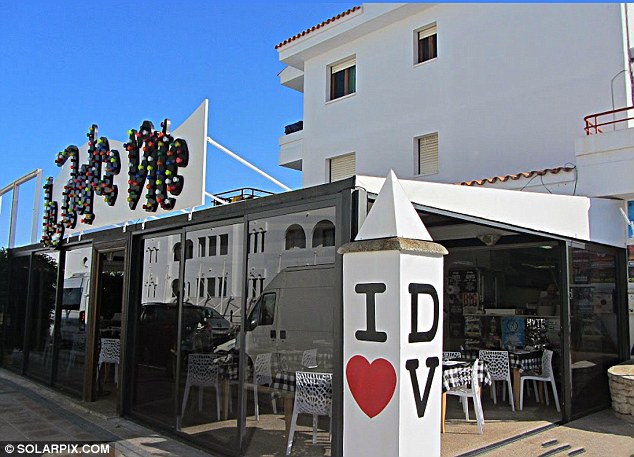 Mr Aramaz is believe to have been with friends when he fell from the second floor of an apartment block, hit the awning of this restaurant, and ended up on the terrace

He said on Facebook: ‘I am proud to announce that I will be an Enfield Councillor candidate in the upcoming local elections in the Edmonton Green Ward.

‘Enfield is where I have lived all my life and I am committed to serving my ward and the borough to the best of my ability alongside my comrades Ergin Erbil and Mahym Bedekova.

‘I ran on the ticket that I will be a democratic socialist voice for my residents that will represent workers and I mean to stick by my words. As the three candidates in this ward we will serve the many, not the few.’

A 42-year-old Brit is also in intensive care in the same hospital in Ibiza as Tolga after plunging from a San Antonio hotel around 24 hours earlier.

Three Brits have also died following falls in Magaluf so far this year, which all happened at the same apartment block called Eden Roc.

Thomas Channon, 18, from Rhoose near Barry, South Wales, died last week after confusing the 12-storey block for his nearby hotel.

On June 3 Welshman Tom Hughes, 20, died when he fell near the entrance to the same apartment block after also mistaking the building for his hotel.

On April 27 Scots bar worker Natalie Cormack died at Eden Roc after trying to edge her way along an overhang around a locked entrance door after she discovered she didn’t have keys to get in.

Thomas Channon’s dad John has called his son’s death preventable and insisted he would still be alive if action had been taken to make the building safe earlier.

Town hall chiefs have ordered owners at the block to make urgent safety changes but said excess alcohol is to blame in virtually all the incidents so far this year.

The local Civil Guard has confirmed an investigation is underway into the latest balcony plunge in the Balearics which led to Tolga Aramaz’s hospitalisation.

An official said: ‘An investigation is underway into the circumstances surrounding the injuries sustained in a second-fall apartment fall by a 23-year-old British tourist.’

Superstore Season 4 Premiere Recap: What's Next for 'J-Bone' and 'A-Hole'?