An eco-warrior spending lockdown sorting through 39 stone of plastic waste he found on a single beach was shocked to find three cereal box toys from 62 years ago.

Rob Arnold, 62, has been beach-cleaning near his home in Liskeard, Cornwall, for the last seven years, but made fighting microplastics his full-time mission since he retired from his picture-framing business four years ago to start making environmental art.

Now the single dad-of-one is spending his time socially distancing at home to sort through 40 bags of plastic weighing an astonishing 39 stone, which he collected from a single cove, Tregantle Beach in Whitsand Bay, last month. 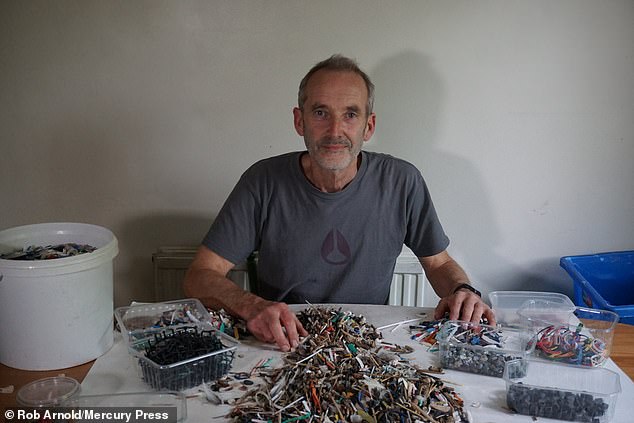 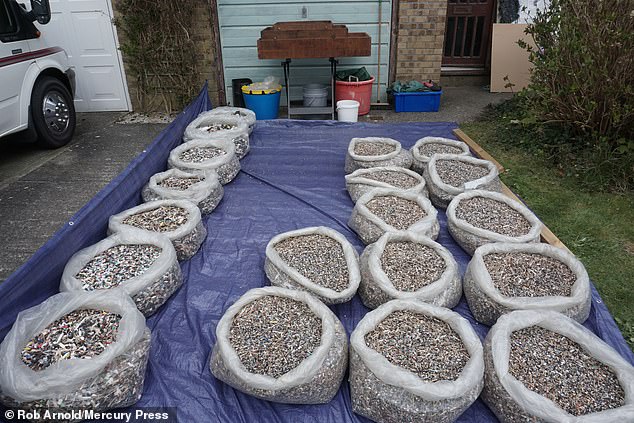 The mammoth task, which he believes will take him five weeks to complete, has already uncovered some damning finds for the planet, including two Kellogg’s toy figurines and a Quaker Oats badge, all from 1958.

Mr Arnold said: ‘I found a Kellogg’s figurine of an Indian American chief, which had been part of a set of four from 1958 and was pretty much still perfectly intact.

‘It wasn’t hard to find out more about it because people collect these items and share them online.

‘But when I found another Kellogg’s figurine and a toy sheriff’s badge from a Quaker Oats box, both from 1958 as well, I was shocked. 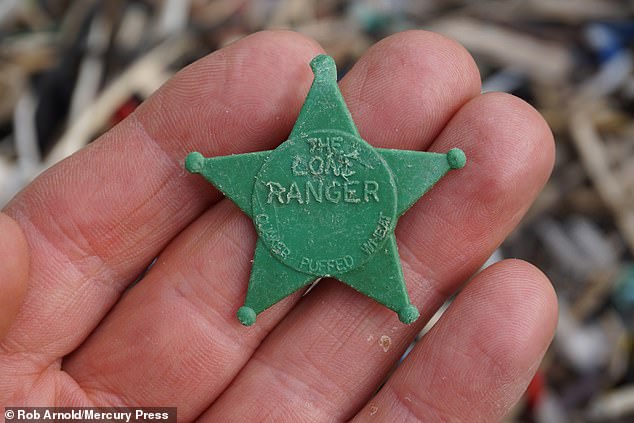 Whilst cleaning, Mr Arnold found a toy sheriff’s badge from a Quaker Oats box which was astonishingly from 1958 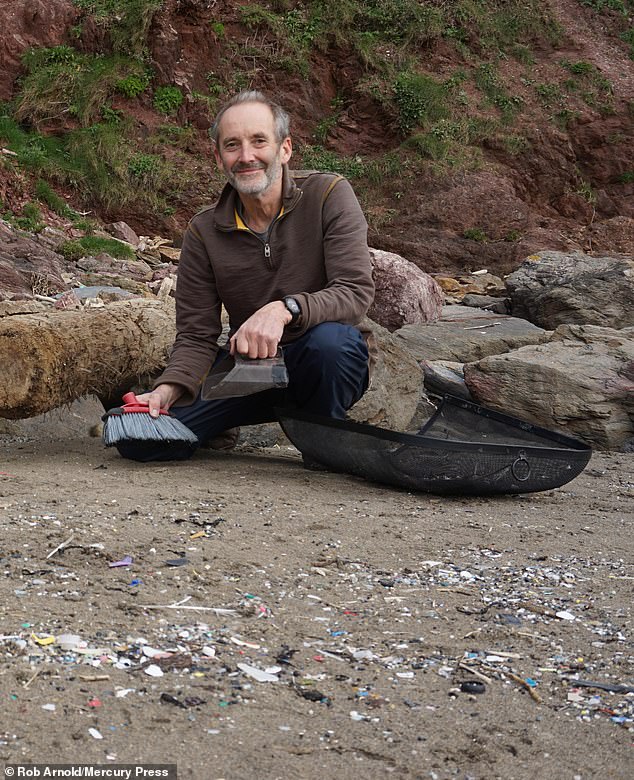 ‘In a way I was quite excited because finding something like that helps prove that the cause is worthwhile, by showing people that it is still there after 62 years.

‘But it’s bittersweet because it also gets me down that we still have plastics polluting the planet from decades ago.

‘Another of the most damning finds is the amount of polystyrene.

‘I’m not even halfway through sorting out the entire load and when I get down to sieving the smaller parts, it’s coming out like snow.’ 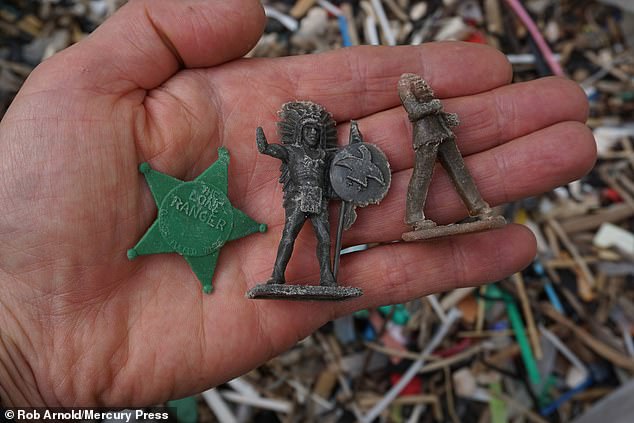 Alongside the sheriff badge, he found two figurines from the Kellogg’s box, one of which was a Indian American chief (middle)

Since retiring, Rob has become an environmental artist, using his plastic discoveries to make sculptures to raise awareness of plastic pollution.

The process of sorting through the plastic requires the passionate beachcomber to wash and lay out the waste on his drive to dry out before sifting through the items by hand into size and type of plastic – prompting questions from puzzled neighbours.

It took the 62-year-old, who has one son, Ben, 30, just three days to collect the huge load of microplastics from the beach, with some help from fellow environmentalist pals.

And Rob has spent every day of the last three weeks sorting the latest batch of rubbish.

In that time from the same sweep he has also discovered nearly 150 plastic car tyre valve lids, a miniature mobile phone believed to be from a Barbie or Sindy doll from the 90s and 400 pieces of Lego from a Lego container spill off Lands End 23 years ago in 1997. 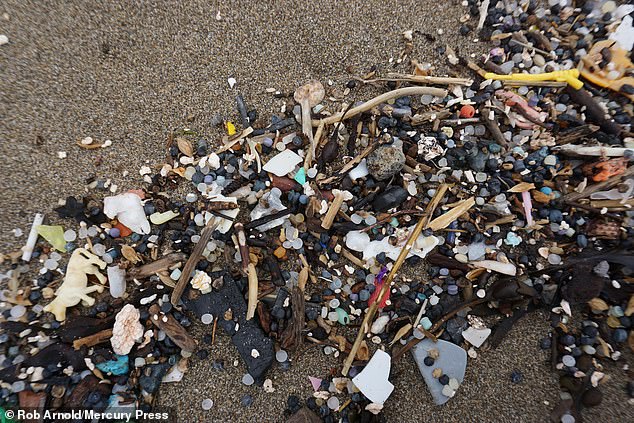 The microplastics on the beach took three days to collect, with the help of fellow environmentalists 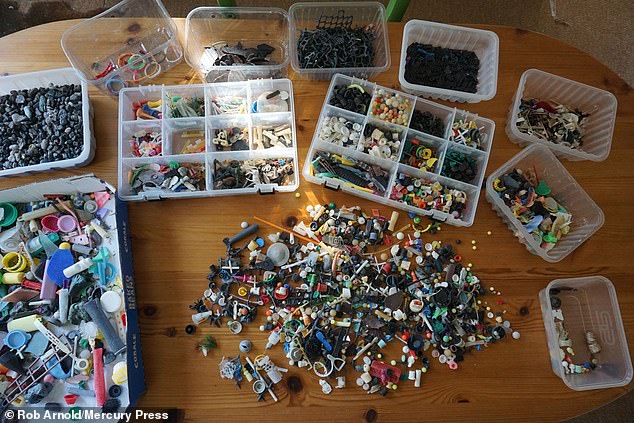 Mr Arnold has spent three weeks organising all the plastics found and hopes by sharing his work, people will do their bit to stop plastic pollution

But over seven years the artist has collected more of one item than anything else – nurdles – or raw plastic pellets, which are used to make all plastic items but are often lost in transit and find their way to the sea, with Rob’s total collected now at more than 20 million.

Rob plans to use these to create a new installation and hopes by sharing his work, people will wake up to the reality of plastic pollution and help do their bit to stop littering and allowing plastic into the world’s waterways.

‘When it’s all laid out on the drive it’s bigger than a car space, it covers the entire drive. Neighbours do look over and ask questions, but I think most of them know by now what I’m doing. 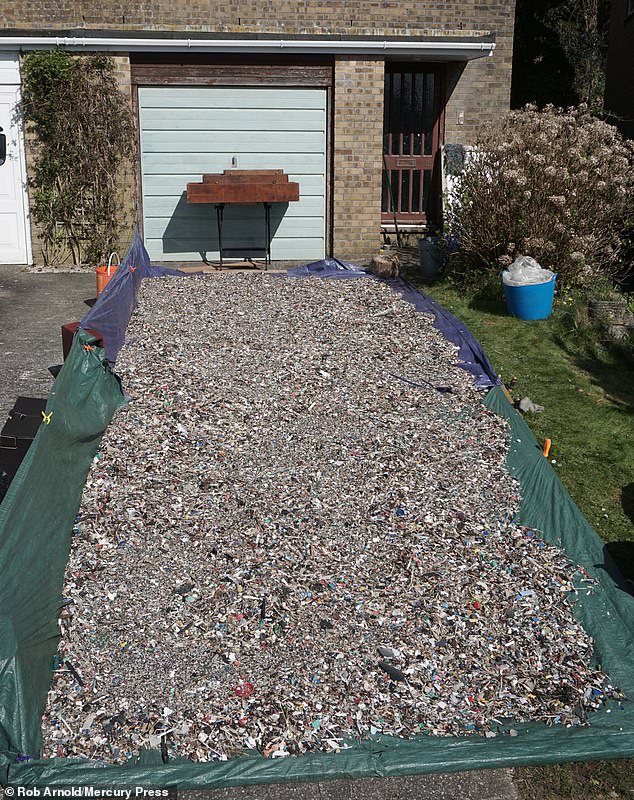 After the vast amount of litter was washed, it was left dry to dry on Mr Arnold’s driveway 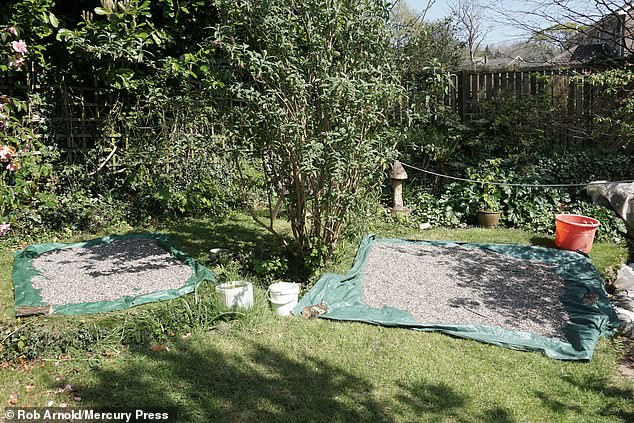 The rubbish, which Mr Arnold will spend another two weeks sorting through, was also left to dry in his garden

‘Really my aim is to get the message out there much further than just to my neighbours.

‘Whether it’s intentional or not one of our biggest problems is littering, and we need to make a conscious effort to stop plastics getting into our drainage systems and on to the sea.

‘Hopefully if we keep showing people what we are finding like these figurines from more than 60 years ago they will think twice before just throwing their plastic away.’

'Fahrenheit 11/9' Early Buzz: Michael Moore Goes After Trump in His Most Powerful Documentary Yet

Paris Hilton Says She Created a ‘Barbie Persona’ to Avoid the Pain of Her Abusive Past: ‘I Wanted to Hide Who I Was’