I don’t want a brother! Little girl desperate for another sister runs away wailing and sobbing after gender reveal balloon covers her with blue confetti

A young girl was devastated to find out she’d be getting a baby brother and not a little sister when a gender reveal balloon showered blue confetti on her.

The clip, which was filmed in Belleville, Michigan, shows three siblings preparing to find out what sex the new baby will be but the eldest is adamant it will be a girl.

However the little girl was heartbroken when she found out it was going to be a boy and ran wailing from the room. 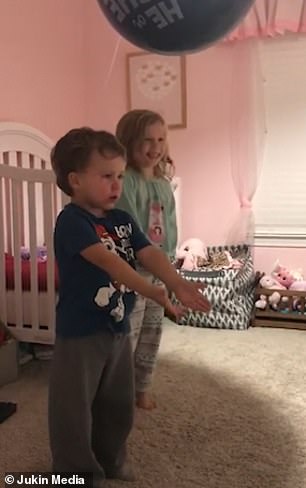 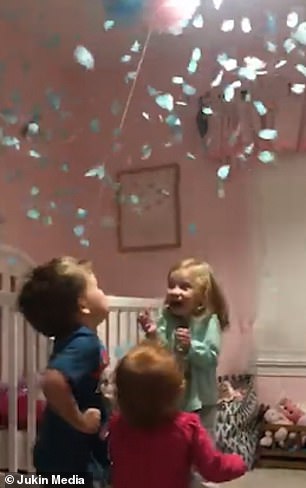 The children excitedly wait for their mother to pop the balloon (left) but the eldest, thought to be called Peyton, is shocked (right) by the blue confetti in the gender reveal in Michigan

The children’s mother can be heard quizzing them about what colour confetti will come out of the balloon for a baby brother or a baby sister.

She asks Bentley, who appears rather unimpressed with all the excitement and his older sister’s squeals, if he’d like a brother or a sister and he answers a ‘boy.’

The mother then asks her eldest daughter, thought to be called Peyton, what she’d like and gets an answer almost immediately.

The little girl bounces up and down clutching at her t-shirt in anticipation before she confidently announces she’d like a ‘girl’ and the confetti will be ‘pink.’

When her mother asks what she’ll do if it’s a boy, the little girl stops squealing and stares in shock at her parents.

A third child, Charlie, then joins the line up and says she’d also like a sister. 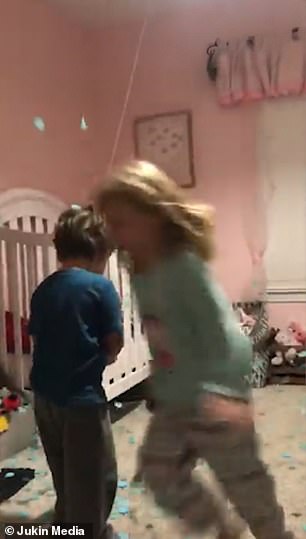 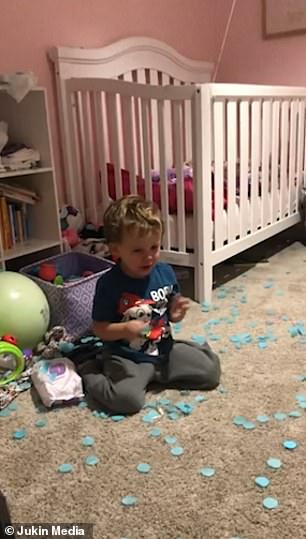 Peyton slams her arms down and runs (left) out of the room wailing, leaving Bentley sitting alone on the floor (right)

Bentley is handed a pin to pop the large balloon and Peyton giggles and jumps around the room waiting for the secret to be revealed.

However the mother has to step in and pop the balloon for her excited children.

As the blue confetti falls on the nursery floor Peyton’s smile fades and she drops her arms to her side, before running out of the bedroom.

She can be heard wailing and crying from another room, clearly devastated that she’ll be having another brother.

Bentley seems pleased with the news – and equally so with the confetti he can now play with – as he moves around the room, ignoring his sister’s cries.

At the end of the video the mother laughs and says ‘I can’t believe it.’

Mum, 51, is on the long road to recovery after life-saving surgery to battle four brain aneurysms