Paris: A lottery millionaire with a love of street art was among eight men found guilty on Thursday of stealing a Banksy mural paying tribute to the victims of the Bataclan terrorist attack in Paris.

Banksy, the British street artist, painted his “sad girl” stencil on the metal door of the Bataclan in memory of the 90 people killed there on November 13, 2015, as part of a string of Islamist attacks on people in bars, restaurants, and the Stade de France football stadium. 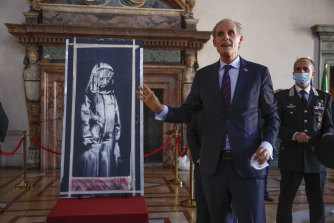 French ambassador to Italy, Christian Masset, unveils the recovered stolen artwork by British artist Banksy, that was painted on a door as a tribute to the victims of the 2015 terror attacks at the Bataclan music hall in Paris.Credit:AP

A white van with concealed number plates was seen stopping on January 26, 2019, in the alleyway running alongside the central Paris music venue.

Many concertgoers fled via the same alley when the Bataclan became the focal point of France’s worst attacks since the World War II in which 130 people died in all.

On the morning of the theft, three masked men climbed out of the van, cut the hinges of the door with angle grinders and left within 10 minutes, in what an investigating judge called a “meticulously prepared” heist. 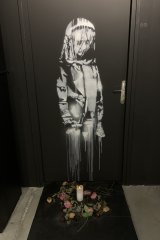 An artist’s reproduction of Banksy’s door tribute to the Bataclan terror victims installed at The World Of Banksy Expo currently showing in Paris.Credit:LT

Investigators pieced together the door’s route from a French alleyway to a farm in Sant’Omero, near the Adriatic coast in Italy, in June 2020.

During the trial, prosecutors accused 41-year-old Mehdi Meftah of being the “mastermind”. Meftah previously won £4.7 million ($8.3 million) on the national lottery and launched a streetwear brand called BL1.D, which sells T-shirts with small 18-carat gold ingots attached for about £429 a piece.

One of the three men who admitted carrying out the theft mentioned that the lottery winner had “ordered” the theft for potential sale in America.

Meftah hid the door in his property in the Var region of southern France on the day of the theft.

He has also owned a Banksy screen print. Asked about this, he said: “I was raised in the street and street art became a fashionable thing. We were brought up with it”. After winning the lottery, he said: “I saw he was in fashion, his message was interesting. I had the means to buy myself a Banksy.”

But he added that he went off the artist because of what Meftah called his “double discourse”.

Meftah told the court he had no idea about the theft of the artwork – valued at up to €1 million – until two of the thieves turned up at his door with the artwork and he told them: “What do you want me to do with it?”

Unwilling to rat on his “friend”, Meftah said he agreed to keep the door until they found a way of getting rid of it.

“Forty-eight hours later, I realised my stupid mistake,” he said.

“I took it, put it in my lorry, and got rid of it to remove the problem.” His cousin and a friend drove it to a hotel in Tortoreto in the Abruzzo region of Italy.

His sentence will be served wearing electronic tracking bracelets rather than in jail. Three men in their 30s who admitted to the theft were given prison sentences, one of four years and two of three. They too will serve the sentence with electronic bracelets.

Three men involved in transporting the door were each jailed for 10 months, while a 58-year-old Italian man, who owns a hotel where it was temporarily stored, received a six-month suspended sentence.

McDonald’s officially adds a bacon double cheeseburger to its menu