‘Pompous, deadly dull and dour’: Edward VIII reveals his gripes with royal life in letter to his OTHER woman – the MP’s wife he courted for 15 years before he gave up the crown for Wallis Simpson

A love letter from Edward VIII which reflects his disenchantment with life as a royal, years before he met Wallis Simpson, is to be sold at auction.

The then-Prince of Wales wrote the four-page letter in 1919, aged 25, while aboard the ship HMS Renown as it took him on a royal tour of Canada.

He sent it to his mistress Freda Dudley Ward, who was at the time married to Liberal MP William Dudley Ward.

Their affair continued until 1934, only ending when Edward became involved with American socialite Wallis Simpson, who he met in 1930.

Edward reigned as King from January 1936 until December of the same year, when he abdicated to marry divorcee Mrs Simpson.

Charles Ashton, a director at auctioneers Cheffins, said Edward’s 1919 letter to Mrs Dudley Ward gives a window into his ‘disenchantment with his life as a royal’. 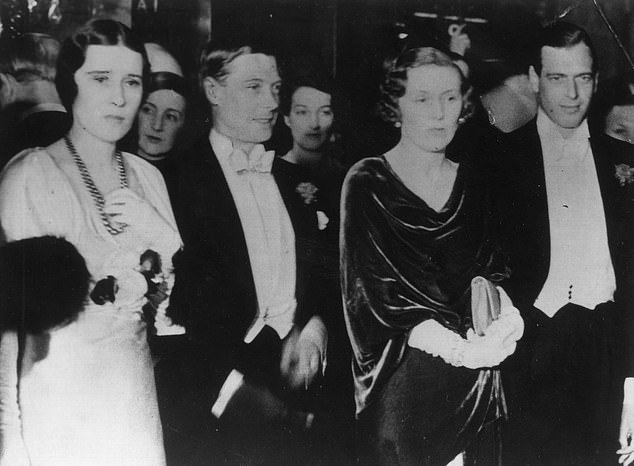 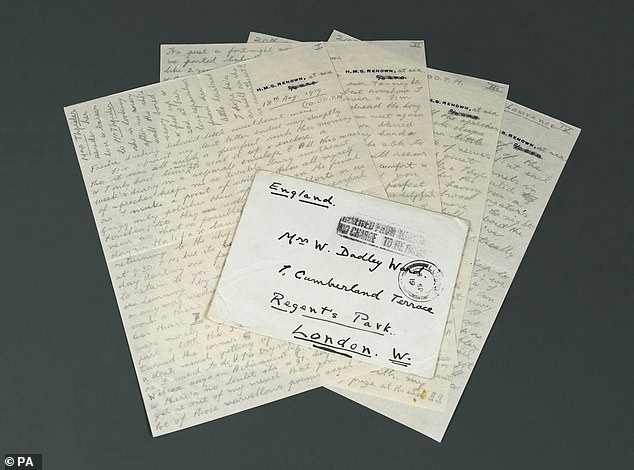 Pictured: The love letter from Edward VIII which was sent to Freda Dudley Ward and reflects his disenchantment with life as a royal, years before the constitutional crisis over Wallis Simpson

Freda Dudley Ward was a married socialite who became the paramour of the future King of England.

The couple first met at a party in March 1918 after Freda took shelter from a Zeppelin raid in the doorway of a London home.

Freda was married to Liberal MP William Dudley Ward with whom she had two daughters.

But the relationship between the Prince of Wales and the married Ward was common knowledge in aristocratic circles.

Winston Churchill famously observed in 1927, after travelling with them on a train, ‘It is quite pathetic to see the Prince and Freda. His love is so obvious and undisguisable.’

Edward was known to have written hundreds of letters to Mrs Dudley Ward expressing his love.

Freda was the grown-up in their partnership, and that was a large part of her appeal. Indeed, Edward had found dominant women attractive long before Wallis Simpson arrived on the scene.

Explaining to Freda what he needed in a relationship, he wrote in a separate letter: ‘You know you ought to be really foul to me sometimes sweetie and curse and be cruel; it would do me worlds of good and bring me to my right senses!!’

But the future King was not the only man with whom Freda had an affair.

For most of their relationship, Freda had been involved in an equally intense affair with Michael Herbert, a banker and a cousin of the Earl of Pembroke.

After his death in 1932, Freda was devastated and her family believes that he, rather than the Prince of Wales, was the love of her life.

In 1926, Edward met, and later started seeing, a twice-married American, Thelma Furness – as well as Freda.

It was Thelma Furness who would later introduce Edward to Wallis Simpson for whom he would abdicate the throne.

The end of Edward’s 16-year relationship with Freda was equally brutal and abrupt.

After she hadn’t heard from him for a few weeks, she called St James’s Palace and was told by the operator: ‘I have orders not to put you through.’

Freda and the prince never spoke again, and she was deeply hurt by his neglect.

He had made up his mind that he wanted to be with Wallis and was determined to make a lasting commitment, no matter how great the cost.

In the letter, Edward referred to speeches he had made, writing: ‘What I think of all this official wonk and these cornie pompous stunts & I’ve made no less than 7 speeches today.’

He described Canadian prime minister Robert Borden, whom he had dined with, as ‘such a stick & deadly dull except re politics & I can’t tackle him on that subject’.

He told his mistress he would be spending a day at Prince Edward Island, one of eastern Canada’s maritime provinces, writing: ‘I don’t think it will be very strenuous as it’s such a pip squeak province’.

Expressing how much he misses her, he added: ‘I do love you, love you, my very own blessed little Fredie darling & I find life very hard & dour without you……it’s hell when we are parted sweetheart & when I can’t hear you say all your divine things which is what keeps me alive.’

Edward, for whom sex had been a major preoccupation for him since 1916, when his equerries introduced him to a French prostitute called Paulette, was known to have written hundreds of letters to Mrs Dudley Ward, many of which were destroyed or lost.

In one he asked her to come up to London ‘to give me that hiding’. In another he wrote: ‘I do need you so so badly to chase me into bed with a big big stick.’

Mr Ashton, of Cheffins auctioneers, said: ‘Whilst the liaison between the Prince of Wales and Freda Dudley Ward came to an abrupt end when he fell in love with Wallis Simpson, theirs was an affair which lasted over 20 years and was well-known amongst high society circles, having been famously commented on as ‘quite pathetic’ by Winston Churchill.

‘The letters between the prince and his married lover are of importance as they shed light on the very personal feelings and passions of the future King Edward VIII, which strong sentiments then re-emerged in no less a way, in his love for Wallis Simpson.’

Freda and Edward first met during a Zeppelin raid in March 1918, after Freda took refuge in the doorway of a grand house in Belgrave Square, London.

A party, with the Prince of Wales among the guests, was taking place, and when the hostess invited Freda inside, Edward was captivated, according to Before Wallis: Edward VIII’s Other Women, by Rachel Trethewey.

Freda had married William Dudley Ward, a Liberal MP, shortly before her 19th birthday in 1913, and together they had two daughters, Penelope (‘Pempie’) and Angela (‘Angie’).

By the time Freda met the prince, however, the marriage was under strain. And when, in 1917, her husband William, or ‘Duddie’, was made vice-chamberlain to the Royal Household – a job that took him away from home – a bored Freda found new ways of amusing herself; among them, a growing dalliance with the most eligible bachelor in the world.

Soon, the besotted couple found ways to be together almost every day. Physically they were well matched.

Indeed, Freda’s power over Edward was emotional as much as sexual.

As he repeatedly begged her to marry him, Edward demonstrated an unsettling level of devotion, frequently abasing himself with baby talk in letters to his ‘precious darling little Mummie’ and even begging for punishment. 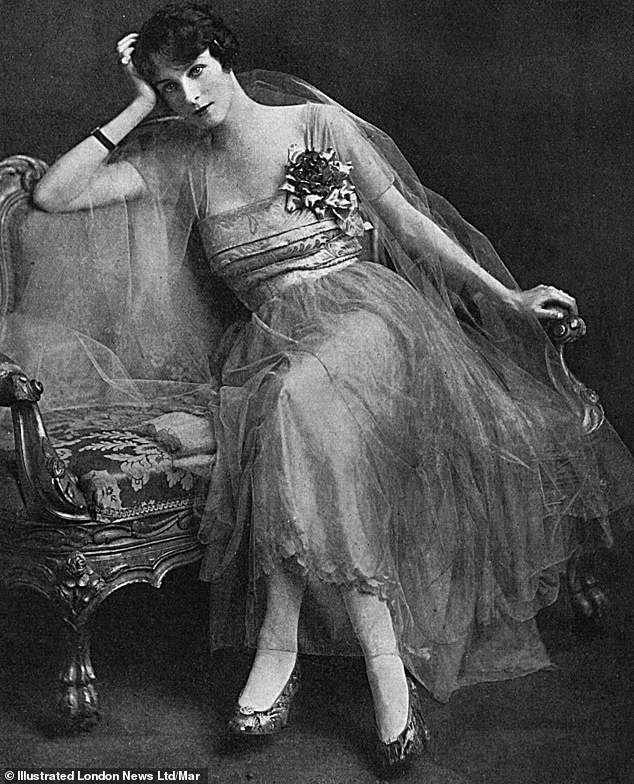 When not in London, Freda stayed at Kilbees Farm, near Windsor, owned by one of her husband’s sisters, and the couple could meet there undetected.

Mr Ashton continued: ‘It is known that the couple first met during a Zeppelin raid in 1918 and it was from then onwards that their affair became serious, with the prince thought to have written well over 300 letters to her during the period and reported to have telephoned her four or five times per night.

‘This letter provides a window into the passions of the future King Edward VIII and also his disenchantment with his life as a royal.’

Edward’s passion for his married mistress became all-consuming and if they were apart, he would phone her four or five times a night. If she were not at home, he was bereft.

He spent much of the 1920s on a series of Royal tours around colonies to thank them for their war effort.

While he was away, he bombarded Freda with dozens of letters written to ‘My Angel’ and signed with ‘tons and tons of love from your E’.

For Freda, though, the idea of marrying or running away was ridiculous. As she was already married there would have to be a divorce, and his parents and the Church would never have allowed it.

The letter, accompanied by the original envelope bearing a black wax seal, is part of the Cheffins Library Sale auction in Cambridge on October 21.

Mr Ashton said that collectors of letters ‘tend to seek out love letters in particular as they usually show more personality than other types of correspondence’.

He said he expected the letter to be ‘of interest to collectors from the UK and further afield’.

Jeff Sessions fires back at Trump over Alabama Senate race