Moses Ojo, pictured outside Hamilton Sheriff Court, has avoided jail after claiming he was the victim of ‘reverse MeToo’

A male nurse who sexually assaulted female colleagues has avoided jail after complaining he was a victim of the ‘Me Too’ movement.

Moses Ojo targeted two colleagues at care homes, repeatedly groping one woman, telling her he would follow her home and begging her to send him photos when she was ‘dressed up’.

The 39-year-old, from Motherwell in Lanarkshire, was suspended from his job but targeted a 29-year-old woman with sexual advances in another home in Hamilton weeks later.

He has been spared jail after his lawyer said the care homes were ‘female dominated’ and he felt he was a victim of a ‘reverse Me Too’ after women commented on his sex life.

Ojo has been placed under supervision for three years and told to perform 250 hours of unpaid work.

Depute fiscal Vish Kathuria had told the court Ojo attempted to put his hands down his victim’s trousers and whispered in her ear.

She added: ‘She pushed him away and asked him to leave her alone and left the room.

‘She later told police officers what she had experienced made her want to cry.’ 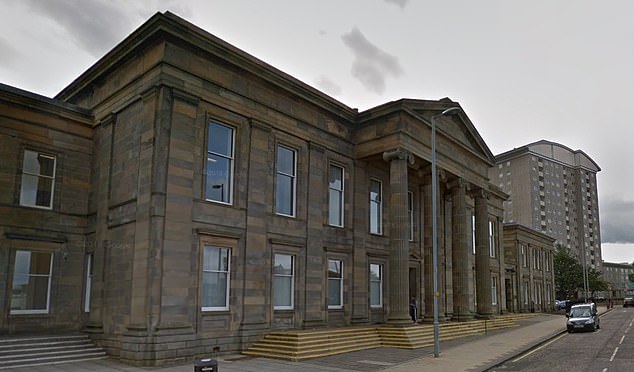 Mr Kathuria said Ojo targeted another woman after moving to a different home, adding: ‘He approached her from behind and grabbed her, forcibly restricting her from moving.

‘He then grabbed her breast over her blouse and began attempting to unzip her blouse while continuing to grope her and kiss her breasts.

‘She struggled with him and continually shouted at him to stop but he attempted to forcibly place his hands down her jeans but she bent her knees to stop him.’

But Judith Hutchison, defending, said: ‘The environment that he was working in was like a reverse Me Too because this was a female dominated environment where females saw fit to discuss the size of his private member.

‘They were asking him about his sexual activity and asking what he got up to with his wife and any other partners.

‘This was in his view banter which carried on through breaks and the working day but he misinterpreted that.

‘There is no defence in relation to this behaviour here and he accepts that.’

Sheriff David Bicket said: ‘This is a direct alternative to custody and if you fail to comply then that is where you will go.’

Ojo was placed on the sex offenders’ register for three years.

The high-profile Me Too movement saw a string of celebrities and women reveal on social media how they had been victims of sexual harassment.

Outlander: Read This If You Want to Know If Brianna Reunites With Claire or Jamie