A fox foraging for wild cherries on a parked car, a seal that thinks it’s a comedian and a cheeky squirrel: Amazing snaps show the year’s best mammal photos

An incredible picture of a fox foraging for food on a car bonnet has scooped the top prize in the Mammal Society’s annual photography contest.

Other breathtaking images from the competition include a mountain hare rolling in snow, a bat in flight and a squirrel peeking out from behind a tree.

The winning photo of the fox – which was looking for wild cherries that had fallen onto the parked car – was taken by Roger Cox, from East London.

He said: ‘This animal often foraged for the wild cherries that fell from the trees and landed in the wells between the bonnets and windscreens of parked cars. It was also used to getting food from people who threw it out of their car windows at night during the early hours.’

The Mammal Society is a charity devoted to the research and conservation of British mammals.

This year’s competition saw the introduction of a new category, Elusive Mammal, which was created to highlight photographs depicting mammals which aren’t often spotted, or which may not have been photographed very successfully in the past.

And among the other categories was Mammal Comedian of the Year, with the honours going to a grey seal…

All winning and highly commended photographs can be viewed at the MPOY2020 exhibition at Robinson College, University of Cambridge, at the start of the Mammal Society’s annual Spring Conference on Friday, March 27. 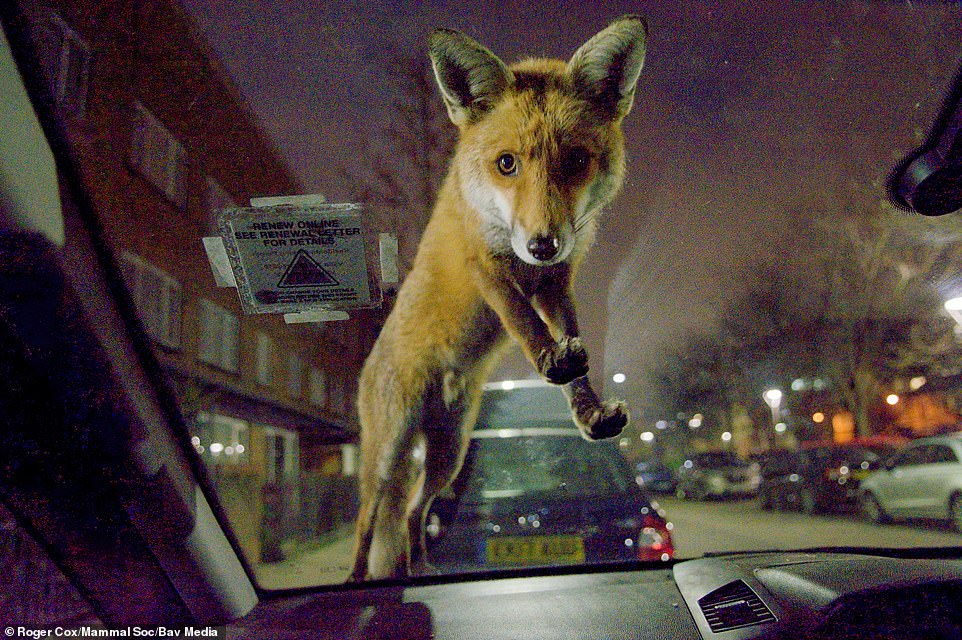 This image of a fox foraging for food on a car bonnet has scooped the top prize in the Mammal Society’s annual photography contest. It was taken by Roger Cox, from East London, who also won the Mammal Society Member’s Award. He said: ‘I took this picture when it jumped up on my car to investigate if there was anything of interest for it, as I’d seen it do several times before. Shooting photographs through the windscreen of the car is tricky given the angle of the glass but with a fox so close, it helps keep the viewer focused on this encounter.’ Head Judge, ecologist and professional photographer Brett Lewis, said Mr Cox had made a ‘bold choice’ and the win was ‘deserved’. He added: ‘Sometimes photographs like these get overlooked when we return home and look through them on the big screen and many never make it as far as competition entries but Roger made a bold choice and the rewards are deserved’ 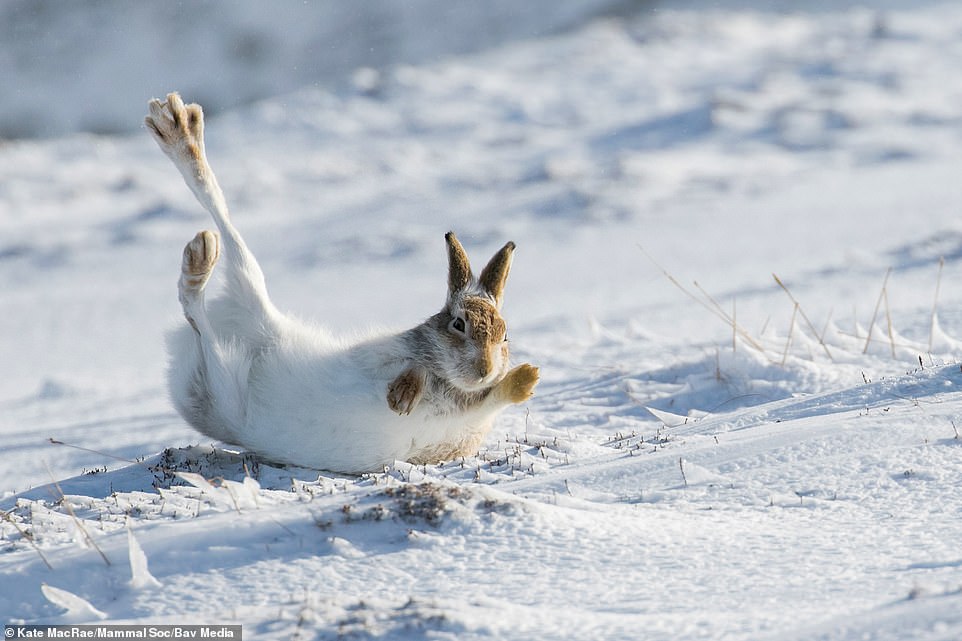 A stunning photo of a mountain hare rolling in the snow helped Kate MacRae scoop the runner-up prize in the competition. Ms MacRae, who took the picture in Scotland, said: ‘The hare ran across the deep snow in front of me, paused and, as I took a shot, it rolled! They often use the snow in this way, to clean the coat and help keep it in tip-top condition; essential in these harsh conditions.’ Broadcaster and Mammal Society patron, Zeb Soanes, who was on the judging panel, said the picture had ‘everything: photographic skill, terrific composition and a sense of drama and character in its subject’ 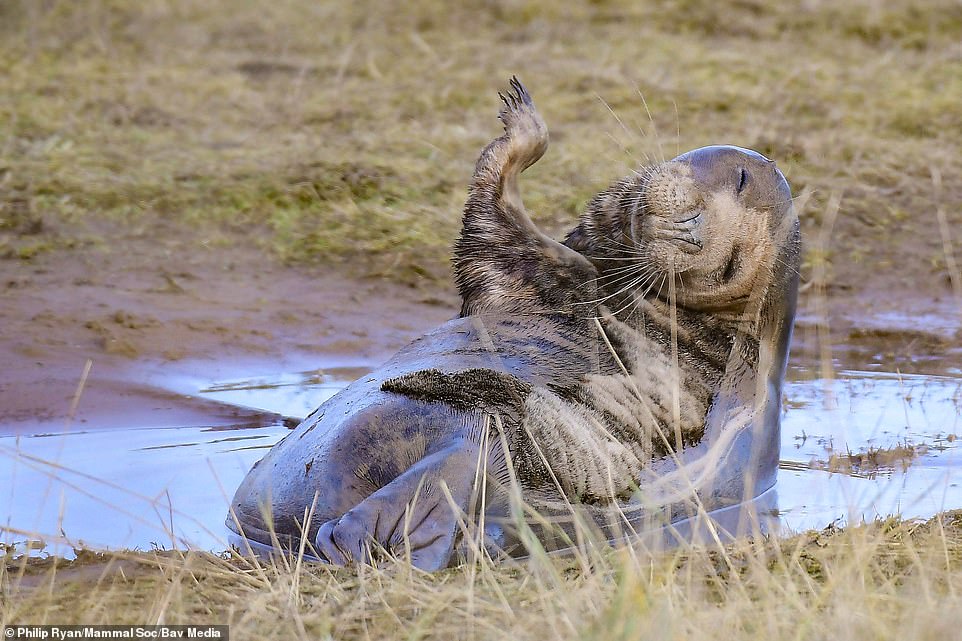 A public vote was held to determine the winner of the Mammal Comedian Award, with Philip Ryan’s funny photo of a grey seal posing for the camera at Donna Nook in Lincolnshire, coming top 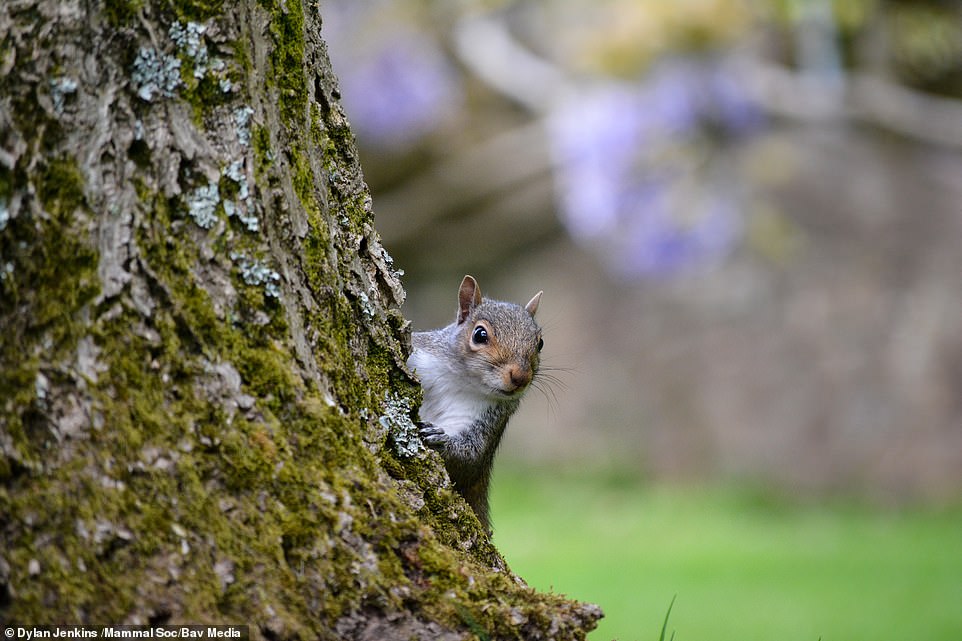 This cute picture of a grey squirrel peeking out from behind a tree saw 10-year-old Dylan Jenkins get the top prize in the Young Mammal Photographer of the Year category. He took the photograph in Singleton Park in Swansea using his mother’s camera and tripod. Competition judge Zeb Soanes said: ‘Dylan’s image sharply captures its subject and its character, at once curious and anxious and that tension between both states makes it a captivating picture’ 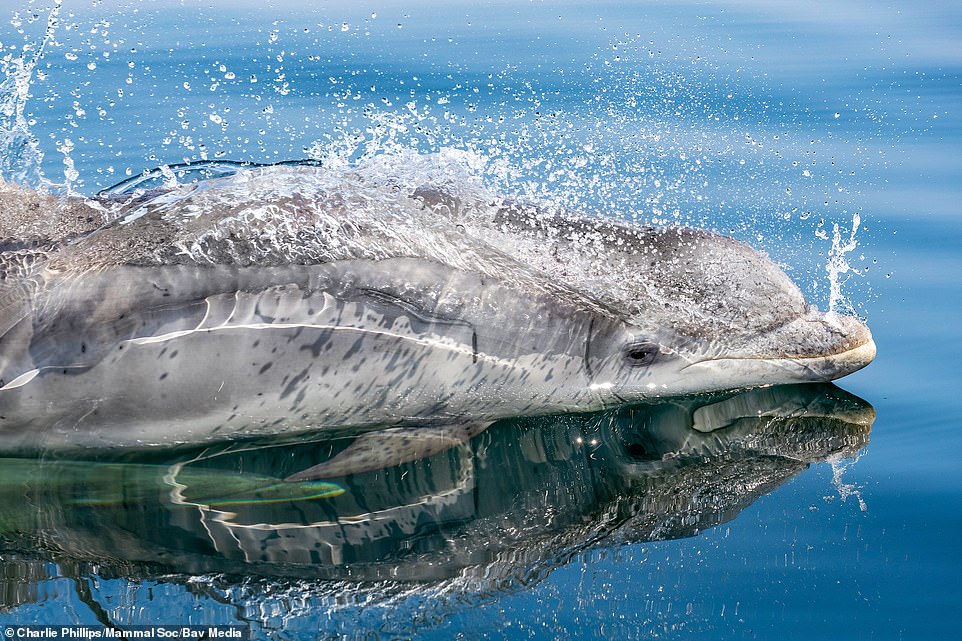 One highly commended picture shows a bottlenose dolphin, which was photographed by Charlie Phillips. The Mammal Society is a charity devoted to the research and conservation of British mammals 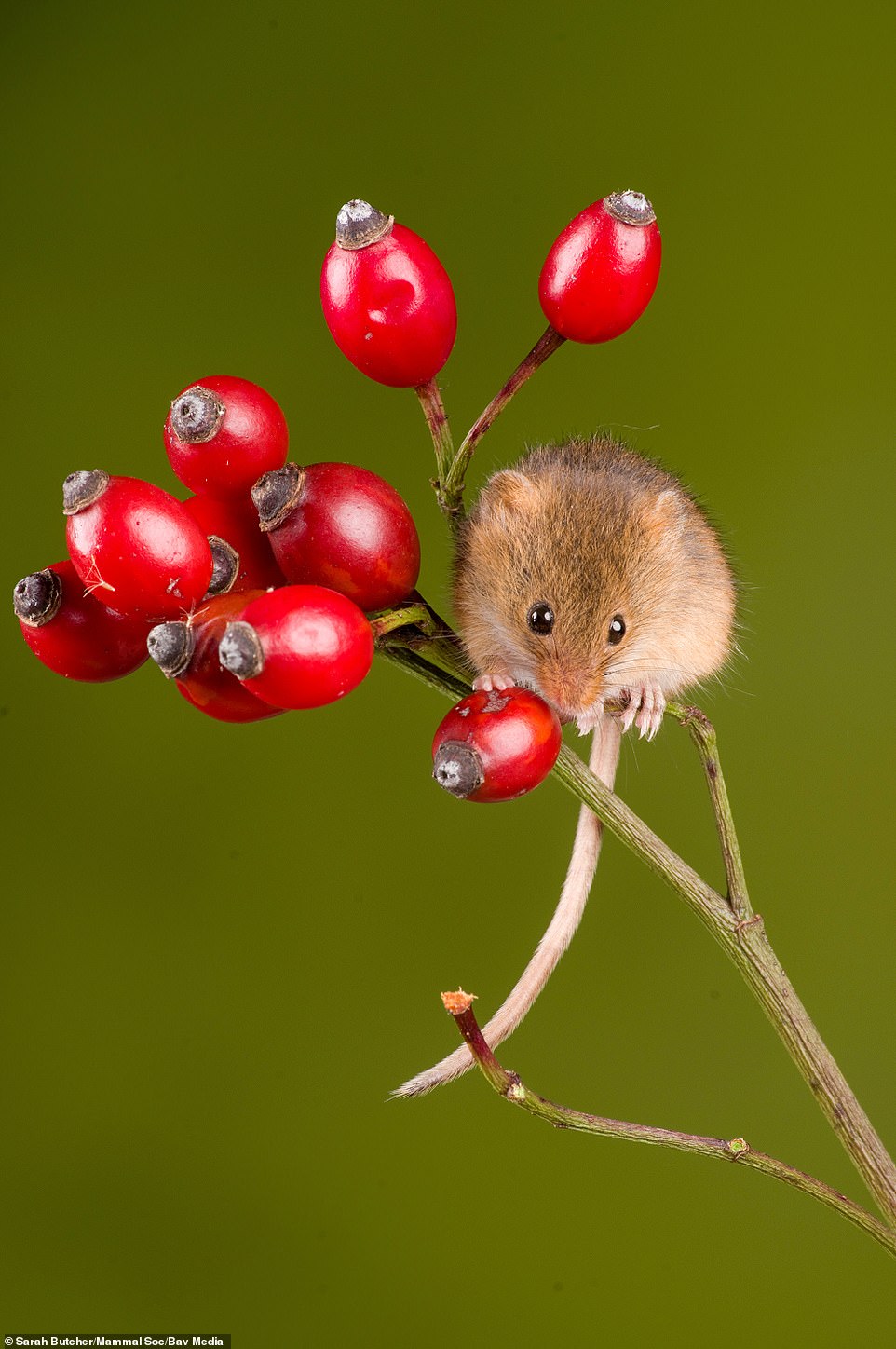 Sarah Butcher was highly commended for her photo of a harvest mouse on rose hip. Head judge Brett Lewis said he was extremely impressed with the quality of the 300 entries submitted for this year’s competition 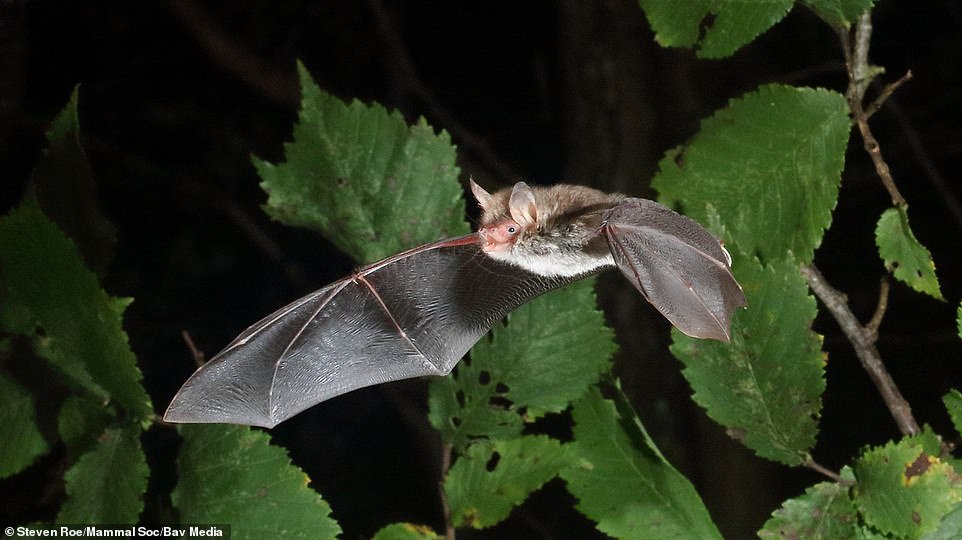 Another highly commended photograph shows a Natterer’s bat in flight, which was taken by Steven Roe. ‘The standard of the competition entries seems to increase with each passing year and the variety of species captured by the UK’s photographers is very pleasing to see,’ Head Judge Mr Lewis added 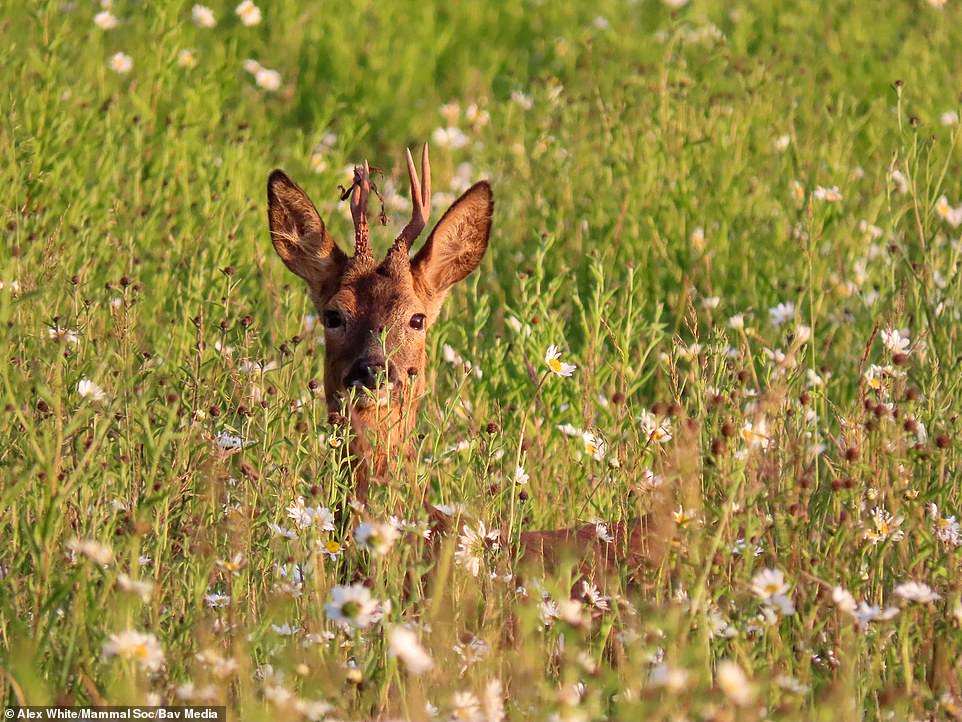 Alex White, from Oxfordshire, won the Young Mammal Photographer of the Year aged 15-18 with his photo of a summer meadow deer, which shows the majestic animal peering through the long grass 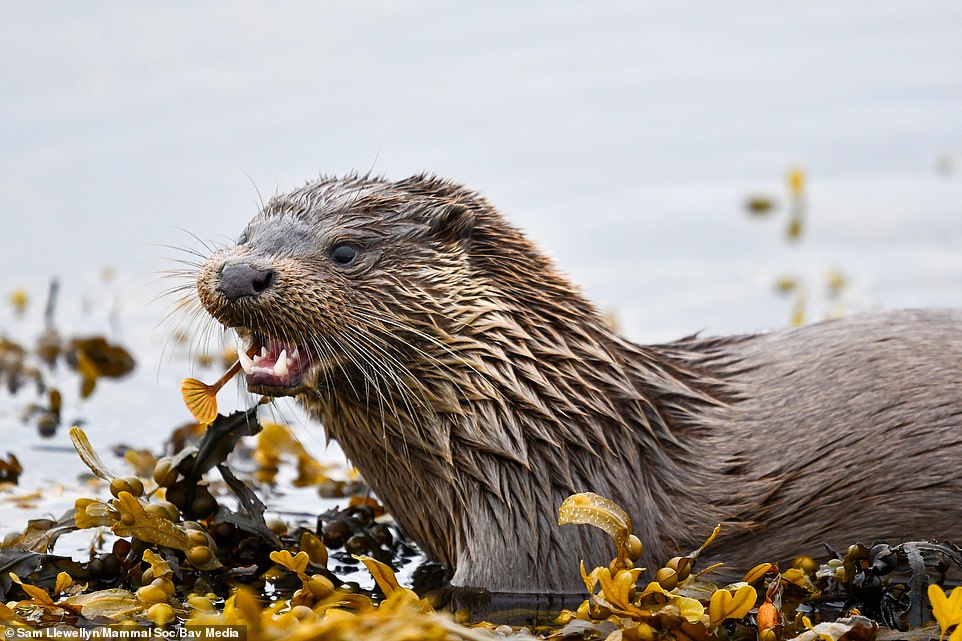 This otter among seaweed, taken by Sam Llewellyn, was also highly commended by the judges. The Mammal Society, established in 1954, aims to raise public awareness of mammals, their ecology and conservation needs 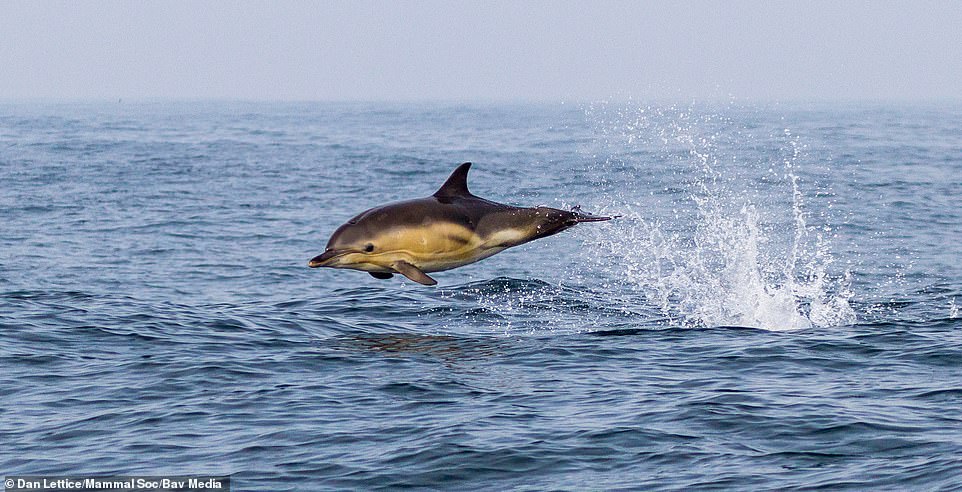 Dan Lettice came top in the Elusive Mammal section for his photo of a breaching common dolphin leaping out of the water off the coast of West Cork in Ireland. He said ‘I’ve seen common dolphins in pods of anywhere from a handful up to hundreds of animals. The joy of a leaping common dolphin is something to behold. They always find time to interact with the boat’ 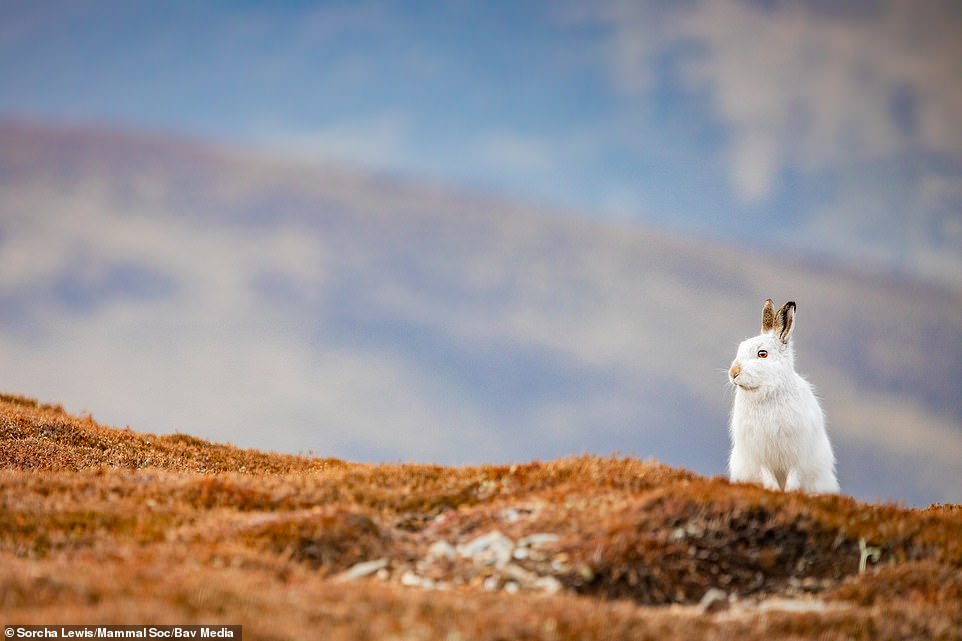 A mountain hare in the Cairngorms, in the eastern Highlands of Scotland. The highly commended photograph was taken by Sorcha Lewis. ‘Many of the images represent the animals in their environment with some facing very harsh conditions, which the photographers have also endured to capture some great photos,’ said the Head Judge 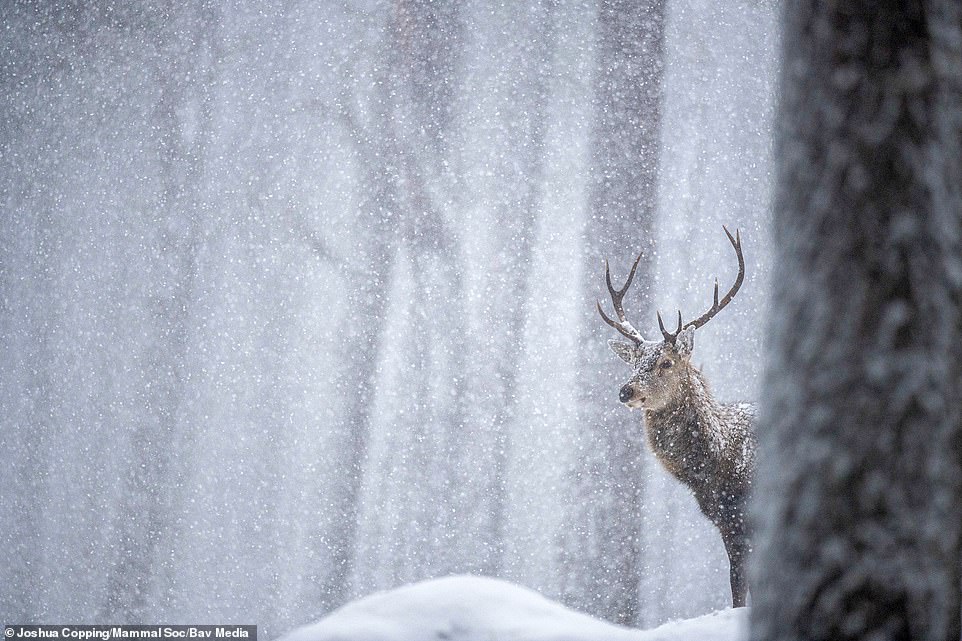 A deer stag in the snow, taken in the Cairngorms National Park by Joshua Copping – a picture for which he was highly commended by the judging panel 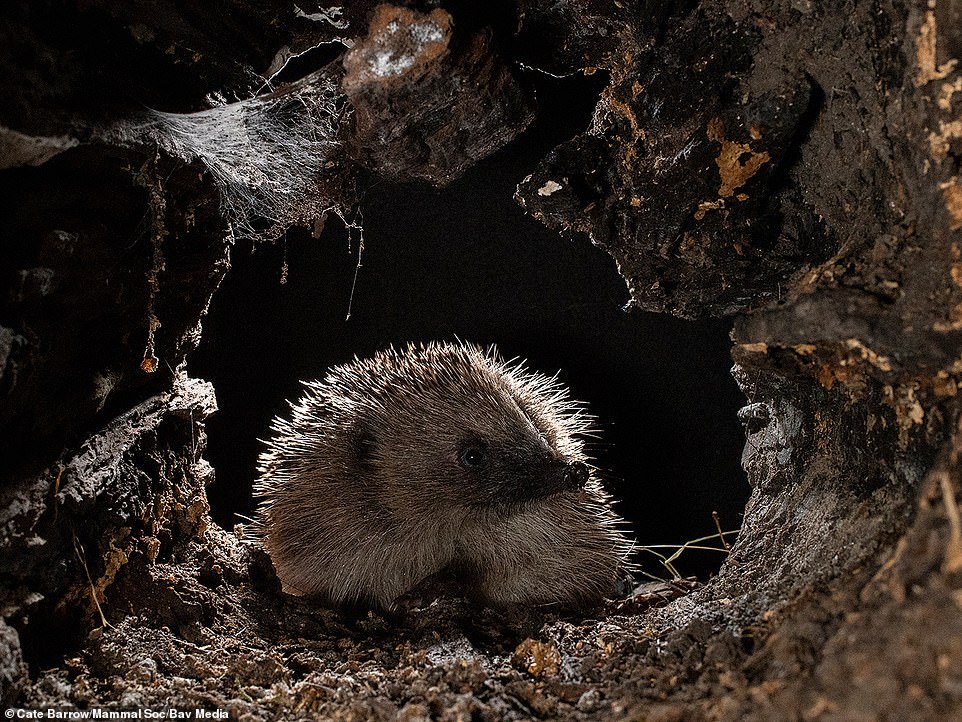 This highly commended picture shows a hedgehog exploring a log, and was taken by Cate Barrow, from South Wales. Each year, more than 300 entries are received and prizes are presented at the opening of the Mammal Society Spring Conference, which this year will be held at the University of Cambridge 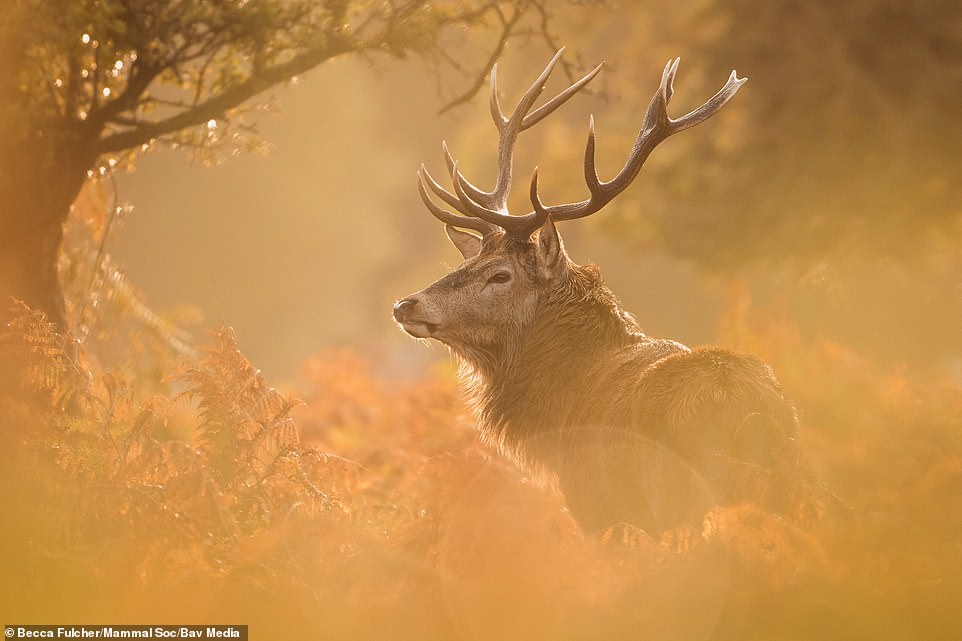 A deer stag in Bushy Park, in Richmond, south-west London. The highly commended photograph was taken by Becca Fulcher. Head Judge Brett Lewis said: ‘Entries were varied and include small mammals in the captive environment to larger mammals found in our seas and oceans, as well as species that were encountered during vital research projects together with those trying to eke out a living alongside our busy lives’ 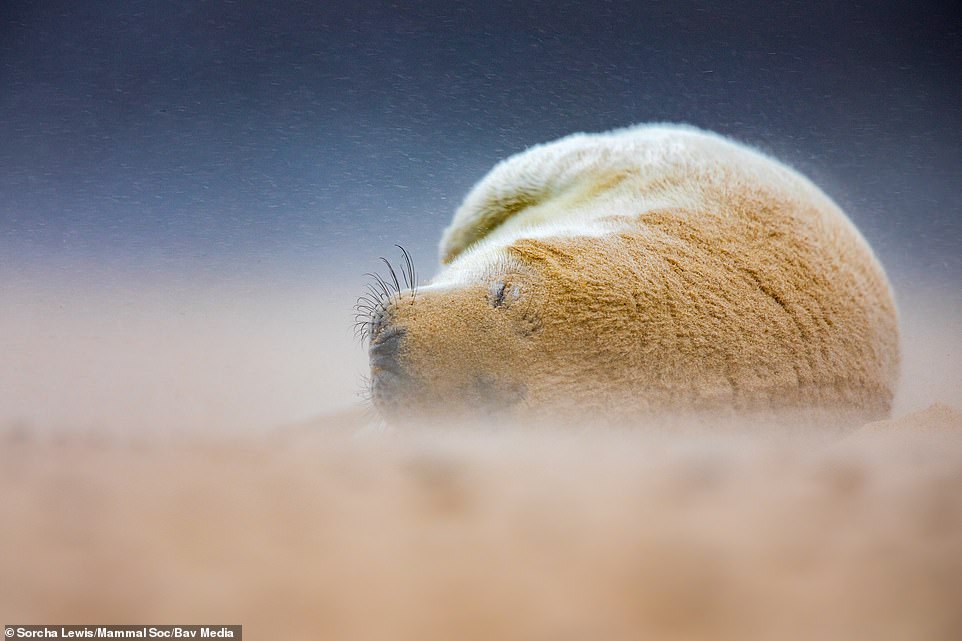 A highly commended photo by Sorcha Lewis shows a seal in Norfolk. The Mammal Society helps to develop the knowledge and field skills of those working with the animals 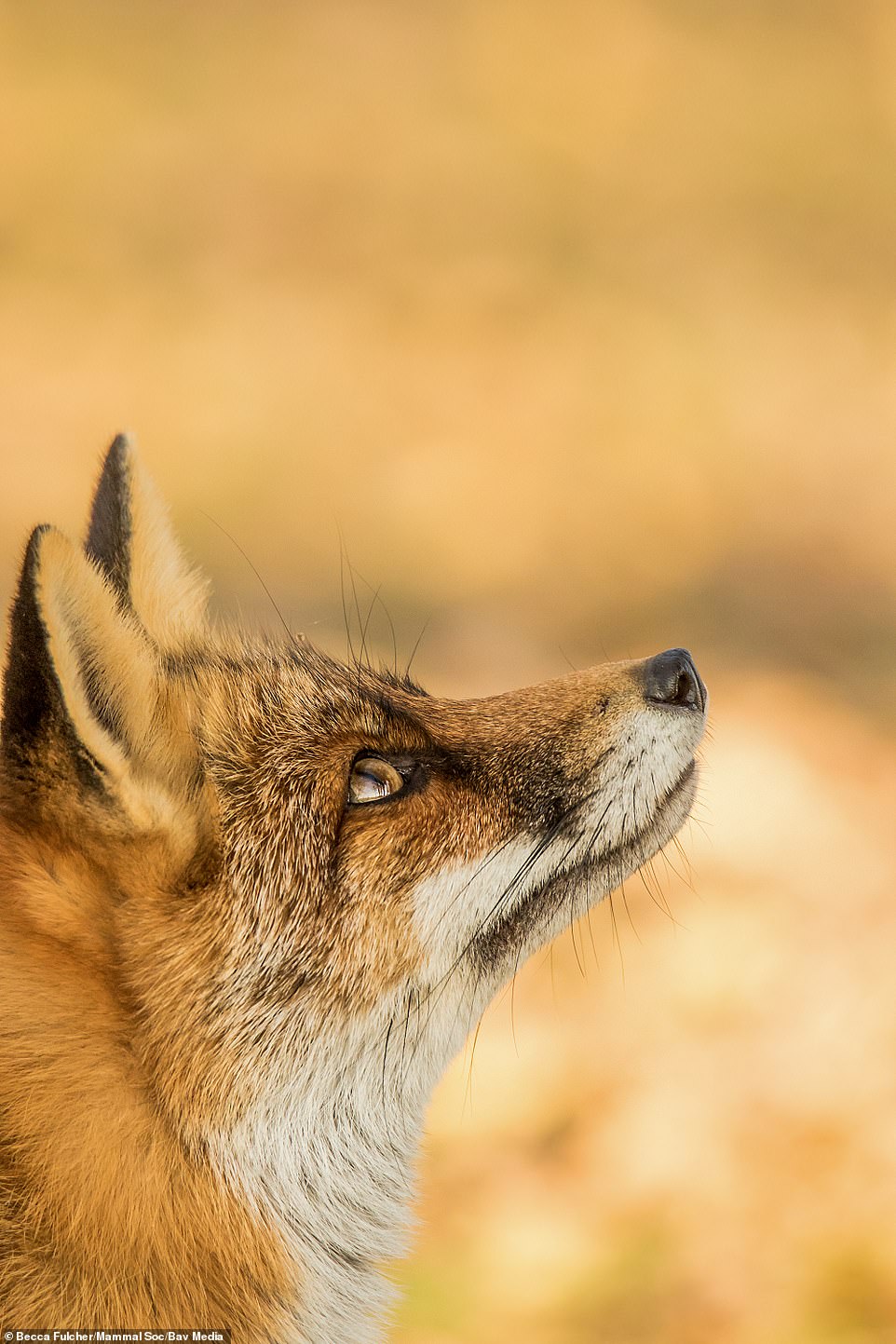 A red fox snapped by Becca Fulcher, from Milton Keynes. Her image was also highly commended 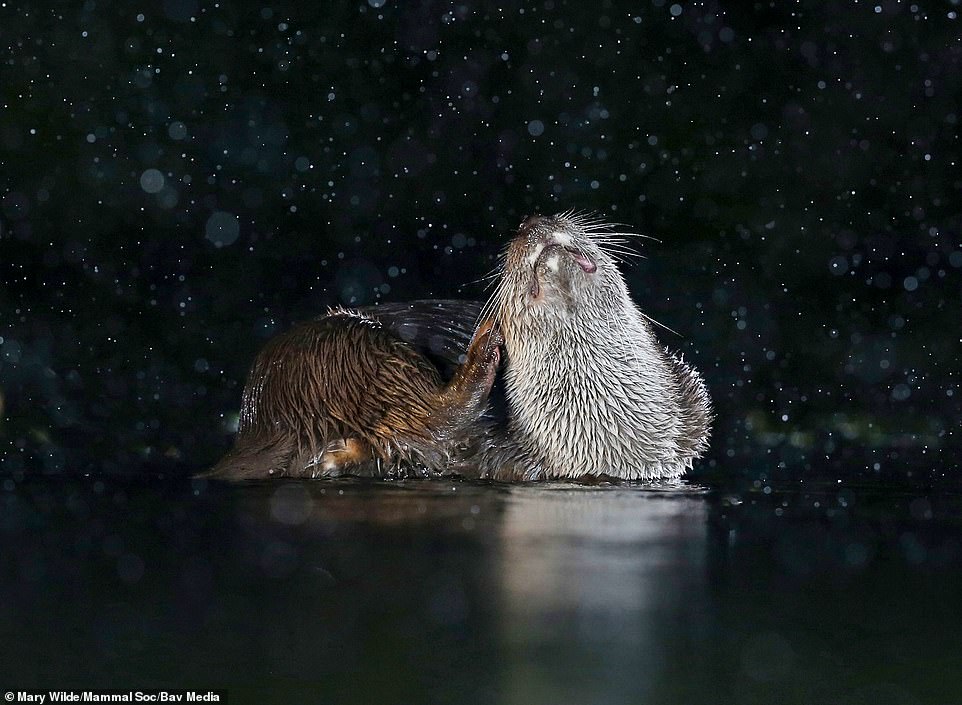 Mary Wilde took this highly commended photo of an otter scratching. Prizes announced by the Mammal Society to date include: a bat photography masterclass; wildlife photography days courtesy of British Wildlife Centre and Westcountry Wildlife Photography Centre; a camera trap donated by NatureSpy; binoculars and a squirrel feeder donated by CJ Wildlife; a £100 voucher from CEWE photographic printing service; and, a £50 voucher and subscription to British Wildlife Magazine courtesy of NHBS 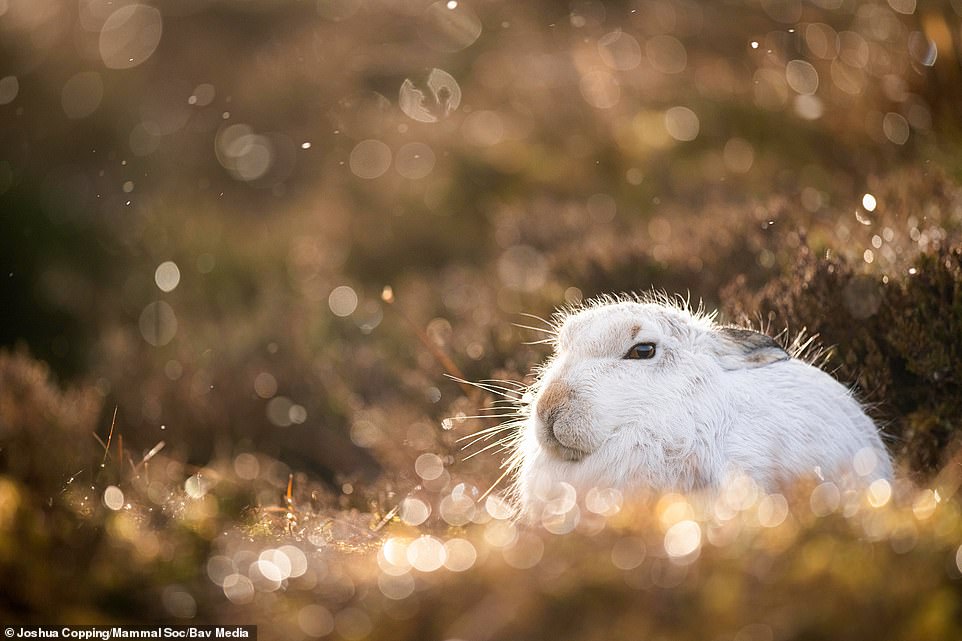 A mountain hare in golden light, in another image taken by Joshua Copping which was highly commended 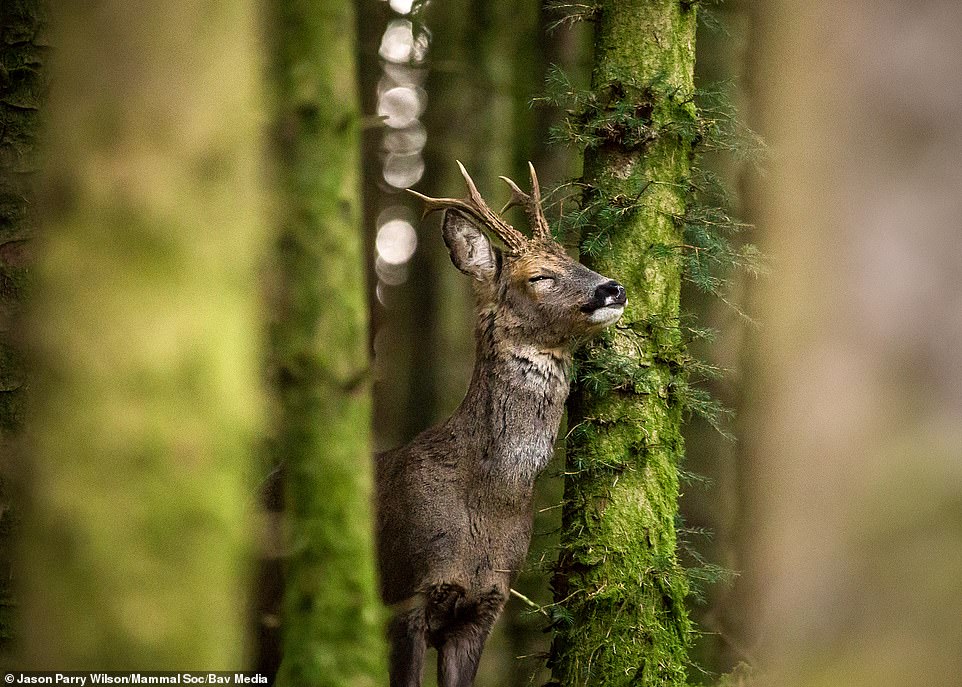 This highly commended picture shows a roe deer and was taken by Jason Parry-Wilson, who teaches at a school in Devon

'Altered Carbon' Explainer: What the Heck Are 'Meths'?