A dog owner lost his tooth after biting the Rottweiler that savagely attacked his pets leaving one needing more than 30 stitches.

Martin Fletcher and his two puppies, who have been left scarred by the attack, were set upon by the dog for no reason and he had to punch and bite the animal to save his Jack Russells from being killed.

He managed to fight the Rottweiler off but was left with a missing front tooth and is now on a course of antibiotics. 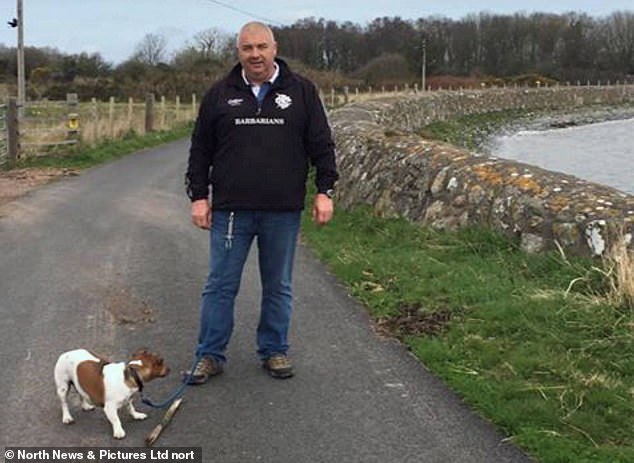 Martin Fletcher, pictured from Redcar was walking with his two puppies when they were attacked by a Rottweiler, leaving one of his dogs with more than 30 stitches following an £800 operation 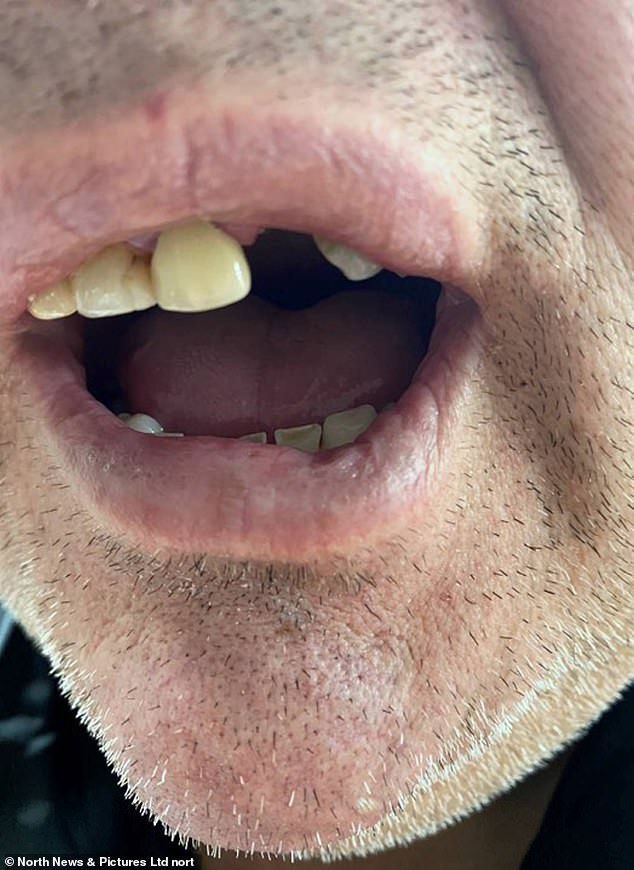 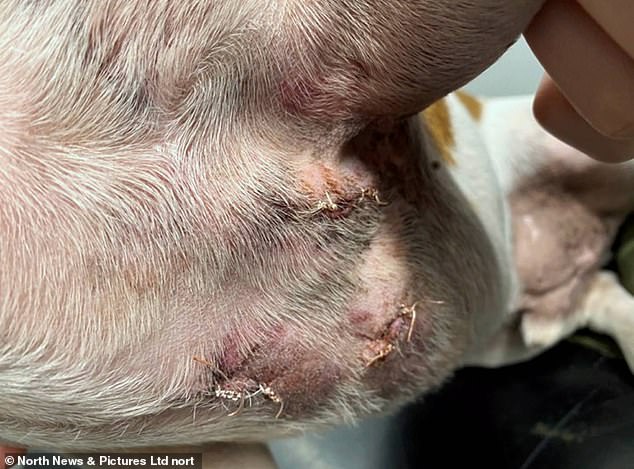 The 55-year-old businessman and his dogs, Ben and Jerry, were left covered in blood after fighting the unknown dog on Sunday afternoonn South Gare, Redcar, North Yorkshire.

Mr Fletcher said: ‘It was a normal day, I got out of my vehicle to walk the dogs and this big Rottweiler just came over and started attacking us.

‘I just couldn’t believe it. I tried getting my dog out of the way and he grabbed the little one.

‘It went for me and got my hand.

‘It looked like my dog was dead, it was terrible, it seemed like the attack went on forever.

‘I tried everything I could to get the dog off him, when as a last resort I bit him.

‘The owner walked over. He was hitting his dog with his lead. I bit the animal hard and I put my hands in its mouth. The man eventually got the dog on a lead.

I was just in shock. 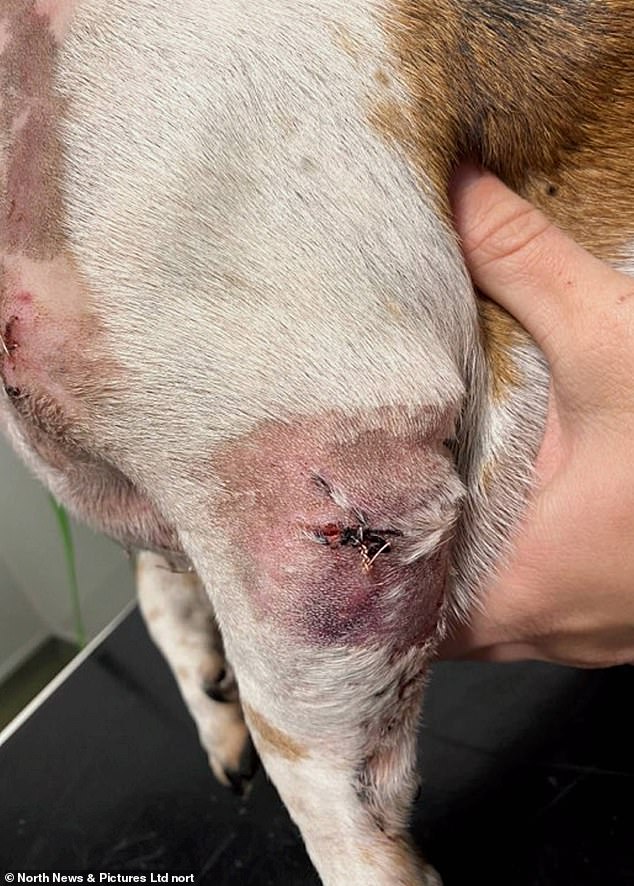 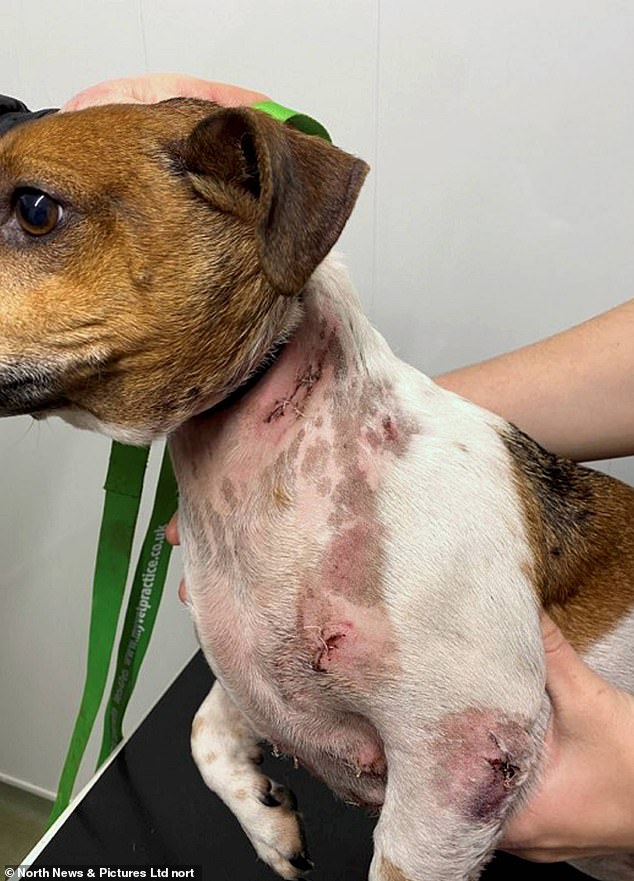 Ben suffered injuries to his neck, chest and neck during the sickening attack

‘I bit the Rottweiler’s ear so badly I lost a tooth. When I opened my mouth my tooth just fell out.

‘There was loads of blood coming out of Ben. I took my hat off and then I saw the man walking away.

‘I was covered in blood.’

Mr Fletcher, who has two grown up sons and lives with his wife of over 30 years, Pauline, 55, added: ‘The only thing I was thinking was that I needed to stop that dog from killing my dogs.

‘It was all I could think of. And I did win. I got my dogs in the end. It is awful to see your see your dogs getting mauled.

‘I rushed them to the vets. Ben had to have an emergency operation which cost £800.

‘He has around 36 stitches. I was bitten on the finger and my tooth came out. I have got to get a bridge put in my mouth.’

The councillor and owner of Cuts Tyres & Exhausts was left needing a tetanus and also had to get five stitches in his hand after prising the  dog’s mouth open.

Jerry suffered puncture wounds to his back and neck while Ben sustained serious bites to his back, chest, neck and a major injury to his front leg.

Martin added: ‘I don’t know the man but if I saw him again I would recognise him.

‘I’ve had dogs all my life and have never seen anything like it.

‘Jerry is okay, the young one, but Ben’s full body is covered in bruises and the stitches are still in.

‘They are lovely little dogs and I have had Jack Russells all my life.

‘The dogs are my children.’

If You Have Pyrex Bowls, You’ll Love These Sturdy Lid Alternatives That Stretch To Fit

Jeannie Mai: How I’m Spending My Days During the Coronavirus Outbreak