Nuisance neighbour, 57, who falsely claimed his landlord was part of a Freemasons paedophile ring and that he was entitled to his property ‘under gypsy law’ is jailed for 18 months 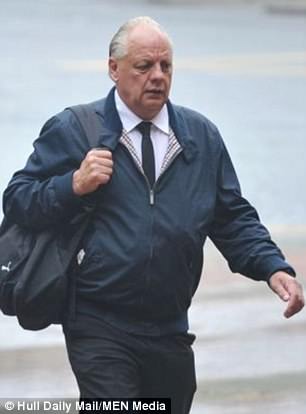 Richard Holliday, outside Hull Crown Court, where he was jailed for 18 months

A tenant who subjected his landlord to a campaign of harassment and claimed he was part of a Freemasons paedophile ring has been jailed for 18 months.

Richard Holliday abused his victim over several months, threatening to stab him and posting letters around his home in Bridlington, Yorkshire, which alleged he sexually abused children.

The persecution came to a head when the 57-year-old former construction worker arranged a confrontation through a ‘gypsy king’ and viciously beat his landlord.

Holliday, who suffers with delusional disorder, also attempted to claim he was entitled to the man’s property under ‘gypsy law’.

As he jailed him for 18 months, Hull’s most senior judge labelled Holliday’s behaviour ‘offensive and outrageous’ and said he fears for other members of the public who could become ’embroiled in [his] delusional view of life.’

Holliday represented himself throughout the case and denied any wrongdoing but was convicted by a jury of putting a person in fear of violence by harassment following a trial last August.

But Holliday is expected to be released sooner having spent more than seven months on remand. 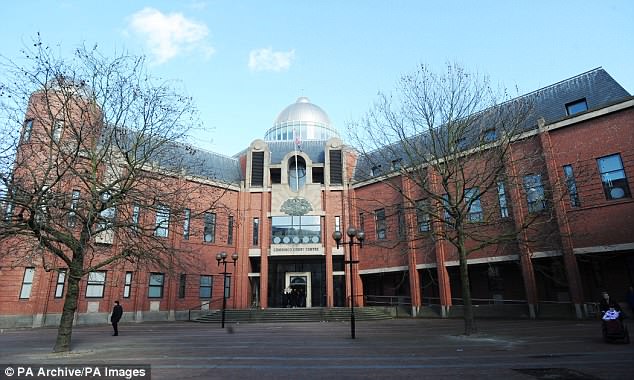 At Hull Crown Court (pictured), Holliday was jailed for 18 months and given a restraining order banning him from Bridlington and from contacting his victim and another man, for 10 years

The court heard Holliday lived in a flat in Bridlington owned by the victim for a year before they had a disagreement in January last year.

Prosecutor Dale Brook said Holliday then began posting letters on buildings complaining of problems in the flat and ‘money owed to him’.

He added: ‘But the letters progressed to alleging [the victim] was involved in the sexual abuse of children and part of a paedophile ring.

‘And there was some sort of ring the victim was involved with maybe involving the Freemasons.’

Another resident told the court he was ‘regularly abused’ by Holliday and said the defendant had threatened to stab the landlord.

WHAT IS DELUSIONAL DISORDER?

The symptoms of delusional disorder include:

Holliday told the judge: ‘I would be very grateful if you would allow me my liberty of freedom again.

‘I would at my age like a peaceful life. I’m going to live on the west coast of Scotland. I intended to go anyway.’

But sentencing Holliday on Thursday, Judge Richardson QC, Recorder of Hull and East Riding, told him: ‘You indulged in a course of conduct that caused him to fear that violence would be visited upon him.

‘The things you stated in the documents you placed in the public domain were extremely offensive and threatening.

‘You accused him of being, in effect, a part of a paedophile ring, and you also alleged it was connected to Freemasonry, and you made threats of violence.

‘That sort of conduct can only be described as offensive and outrageous.

‘That sort of conduct when visited upon an innocent member of the public must, in my judgement, be met with an immediate sentence of imprisonment.

‘I fear that when you go to Scotland history may repeat itself.

‘The doctors fear that as well.

‘Consequently, it will be necessary, so it seems to me, for anyone who has any form of close contact with you to be exceptionally careful lest they be embroiled in your delusional view of life.’

Holliday was jailed for 18 months and given a restraining order banning him from Bridlington and from contacting his victim and another man, for 10 years.

WhatsApp update will help you keep your texts, photos safe from hackers