A man was injured trying to fight off a black bear that had entered a mobile home through an open door last Friday, throwing him to the ground and frightening ten children.

Brandon McVey was visiting a friend’s house in Juneau at the Switzer Village Mobile Home Park when the bear followed them inside at around 11 p.m.

‘Norm, he’s got like 10 kids, and they’re all in the living room,’ McVey said, describing the scene to Anchorage Daily News. ‘(The bear) had walked past us, and he was walking toward the kids.’

One of the ten children – a two-year-old – reportedly reached out to try and touch the bear, but was pulled back by his mother, Angela Lott, who realized what was happening before grabbing the toddler and running into a bedroom.

McVey and the friend he was visiting – Norm Lott – started yelling at the bear to try and scare it away, but it reared up and lunged at them.

‘He just jumped up and basically hit me, and then I kind of threw an elbow the same time he was hitting me, and he sat me right down,’ McVey recalled.

Norm Lott was also thrown to the floor as the bear tried to make an escape through the home’s arctic entry, but only found a closed door, becoming trapped.

Instead, the bear tore at a wall before ripping a window from its frame, and managed to escape through the hole it left behind. 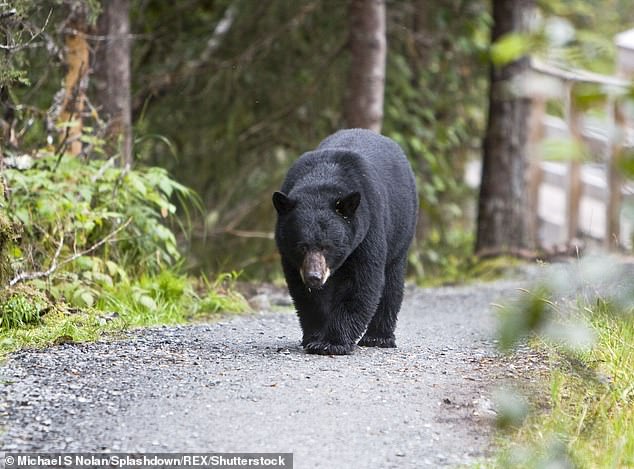 A black bear followed a man and his friend into a mobile home in Juneau, Alaska, and had to be fought off by the man, who suffered injuries in the struggle. Pictured: A young black bear near Mendenhall Glacier Park just outside of Juneau (file photo)

Angela Lott said that ‘it felt like a million years’ as she hid in the bedroom away from the bear while protecting one of the children.

McVey suffered three puncture wounds on his chest during the incident, as well as deep scratches across his chest and shoulders.

A local wildlife and game biologist in the area said that it was unusual for a black bear to behave in such a way, but added that bear encounters had become more frequent in Alaska’s capital, perhaps due to a lack of food in the wild.

In this case, Churchill said that the bear was an adult male and remains at large. 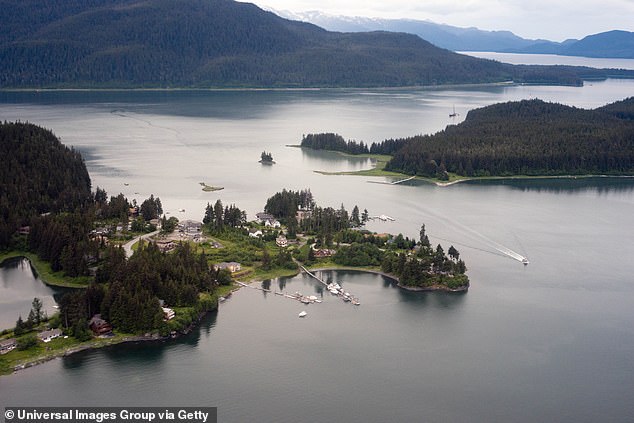 A local biologist said that there have been more sightings of black bears recently in Juneau, Alaska’s capital (pictured, file photo). He said this could be due to less food available in the wild, or because of a lack of tourism in the city emboldening the bears to venture further

The biologist said that it is uncommon for bears to break into homes in Switzer Village, and that the cases he is aware of have previously involved empty homes.

Churchill said that there had been an unusually high number of black bears in Juneau this year, adding that a recent case involved one that had been raiding garbage, and had to be euthanized after being caught in a trap.

‘It seems like there is not much natural foods around right now — very few fish in the rivers and berry production is very low,’ Churchill told Anchorage Daily News, saying that this contributes to bears’ interest in people’s food.

He added that it’s possible that a lack of tourism – and therefore fewer people in the city – could also have contributed to the rise in bear sightings, as there are fewer people to scare them away.

‘Definitely keep your doors closed this time of year,’ McVey said. ‘They’re getting wild out there.’

I had a binge eating disorder for over half my life and didn't leave the house until it was dark, says James Argent