Home » World News » Man tries to rob a group of kids at gunpoint. A mum stepped in and shot him

Even watching the scene unfold on video is terrifying.

A gunman rushes up to a group of primary schoolchildren in Brazil and tries steal a bag. They flee. Mothers grab their children, yanking them to safety. 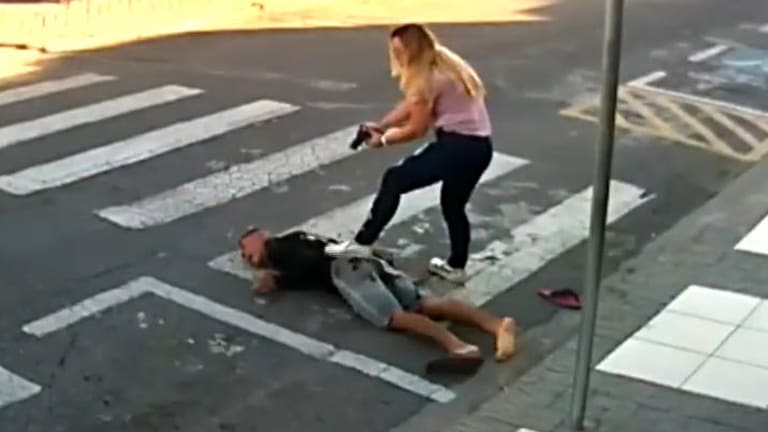 Sastre pinned him down until police arrived.

Sastre was with her 7-year-old at a school in Suzano, a city near São Paulo. They were waiting for a Mother's Day party to begin, according to Newsweek.

The gunman, 21-year-old Eliventon Neves Moreira, was taken to a hospital, where he died.

"It is not ideal that the suspect died. We would have preferred this had not happened," he told reporters. "But it is a warning to those who take up a gun that they could be killed because our security professionals are well trained to protect the public."

São Paulo was once one of the most violent cities in the world. But the area has seen a dramatic drop in crime over the past decade. The homicide rate has declined from a high of 52.5 per 100,000 in 1999 to 6.1 per 100,000 today, about five times lower than the national average, according to the World Economic Forum.

Experts attribute that decline to the drop in unemployment of young men and tight control over who has access to guns and alcohol. Researchers also point to the fact that one gang, known as the PCC, has managed to take over much of the city. "The PCC … imposed its own brand of criminal order, a kind of Pax Mafiosa," according to the WEF.

Alves told reporters that his wife has been in the police force for 20 years. She is doing well, he said.

"She is calm, knowing that she acted correctly," he said. "Everything ended fine. It would have been a greater risk if the suspect had found out she was a cop first."

71M migrants forcibly displaced in 2018, and many still searching for asylum: UN