New video and photos show the empty ninth floor where a suicidal New Jersey man leapt from a high-rise building, landing on a BMW but miraculously survived.

The video, taken by a Daily Mail photographer, shows a barren and gutted space on the ninth floor of the Jersey City building. The lobby of the floor was not under construction.

The 31-year-old man, who has not been named, slammed through the roof of the black BMW and was seen in a bloodied state as he crawled from the wreckage on Wednesday morning at around 10.20am.

As he stood up, with shards of glass and the broken car roof surrounding him, the man saw that his right arm was broken and asked witnesses: ‘What happened?’

More video footage and images from the scene showed the man, who had jumped from an open window at 26 Journal Square, writhing around in pain as he held his broken arm. 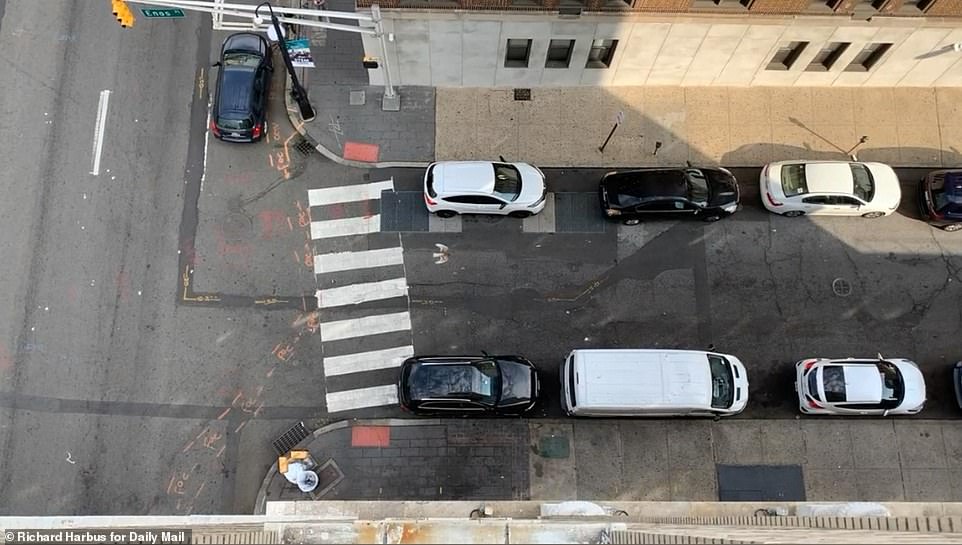 A suicidal man who survived a leap from a high-rise building in New Jersey and landed on a BMW was caught on video crawling to the ninth floor, which was under construction 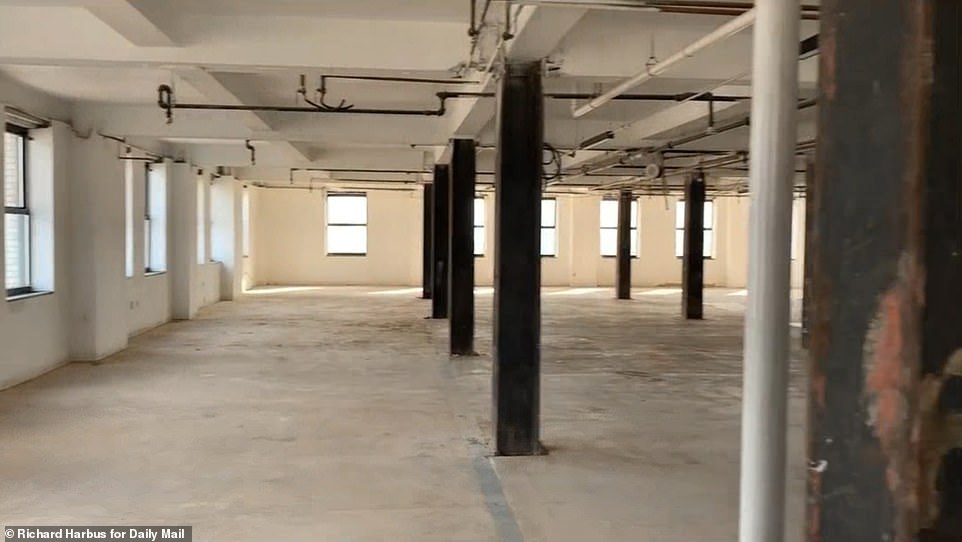 The floor of the Jersey City high-rise was completely barren. The lobby of the floor was not under construction. 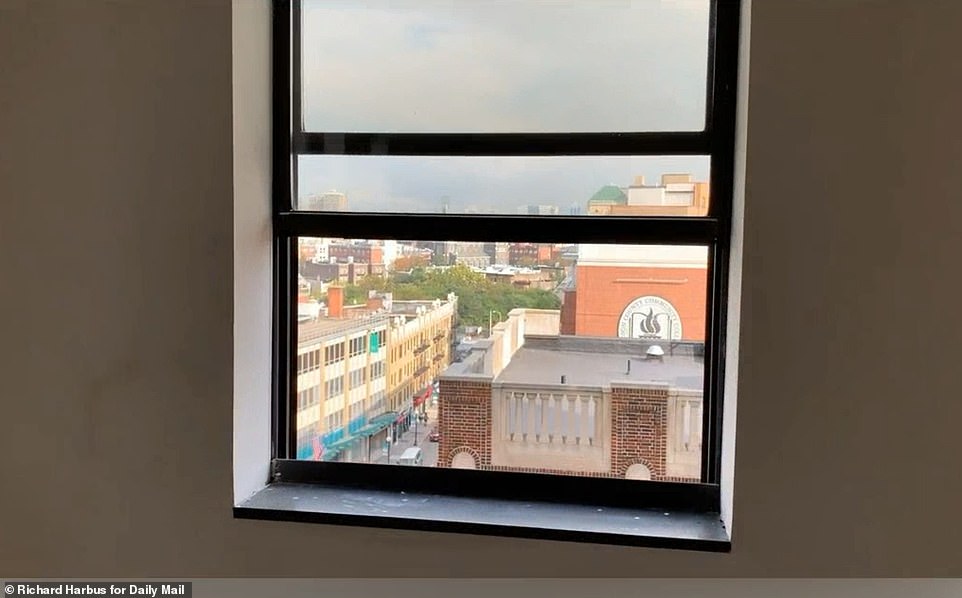 The video, taken by a Daily Mail photographer, shows the view from the ninth floor of the building at 26 Journal Square 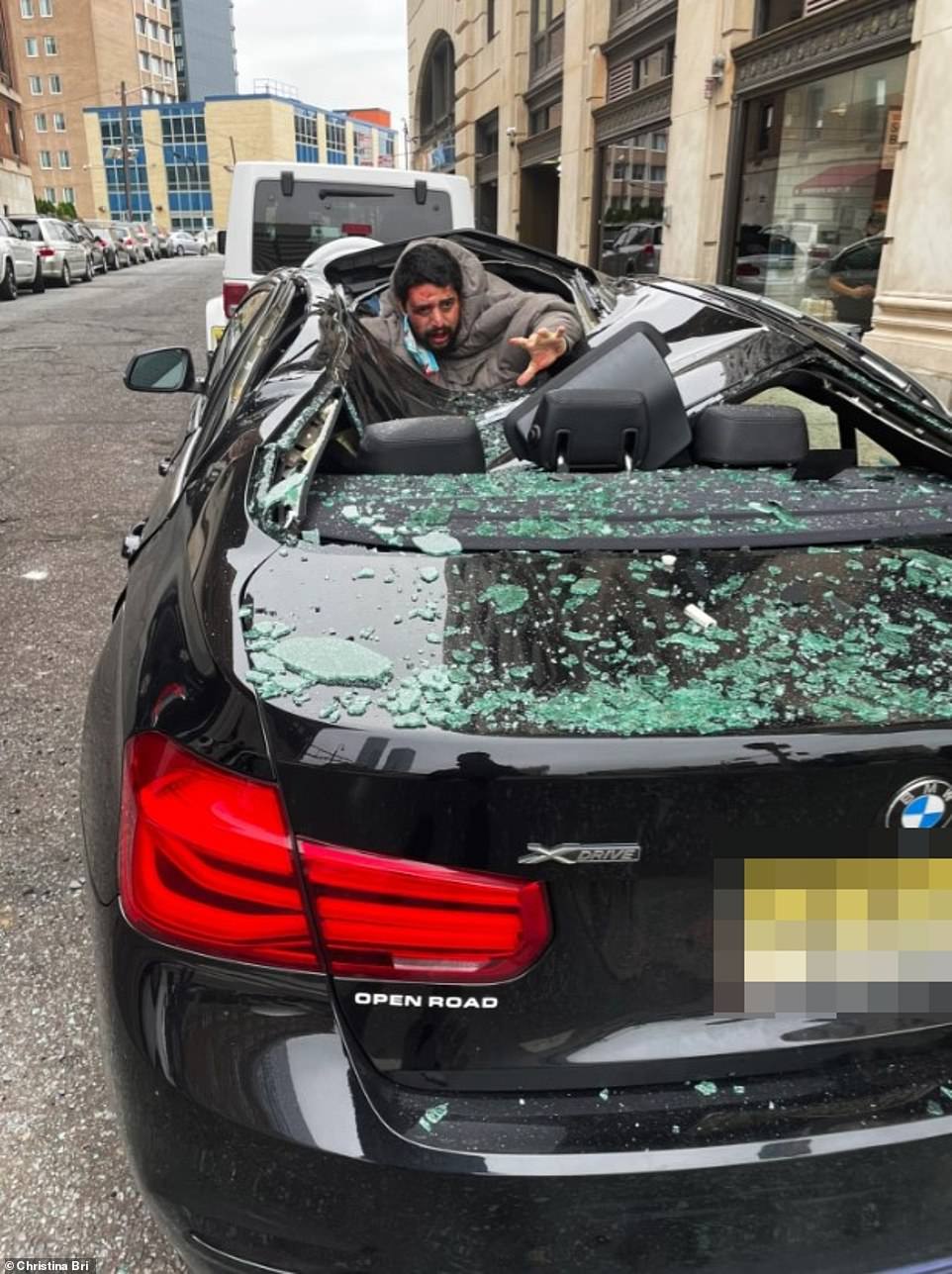 The 31-year-old man, who has not been named, slammed through the roof of the black BMW and was seen in a bloodied state as he crawled from the wreckage in Jersey City on Wednesday morning at around 10.20am 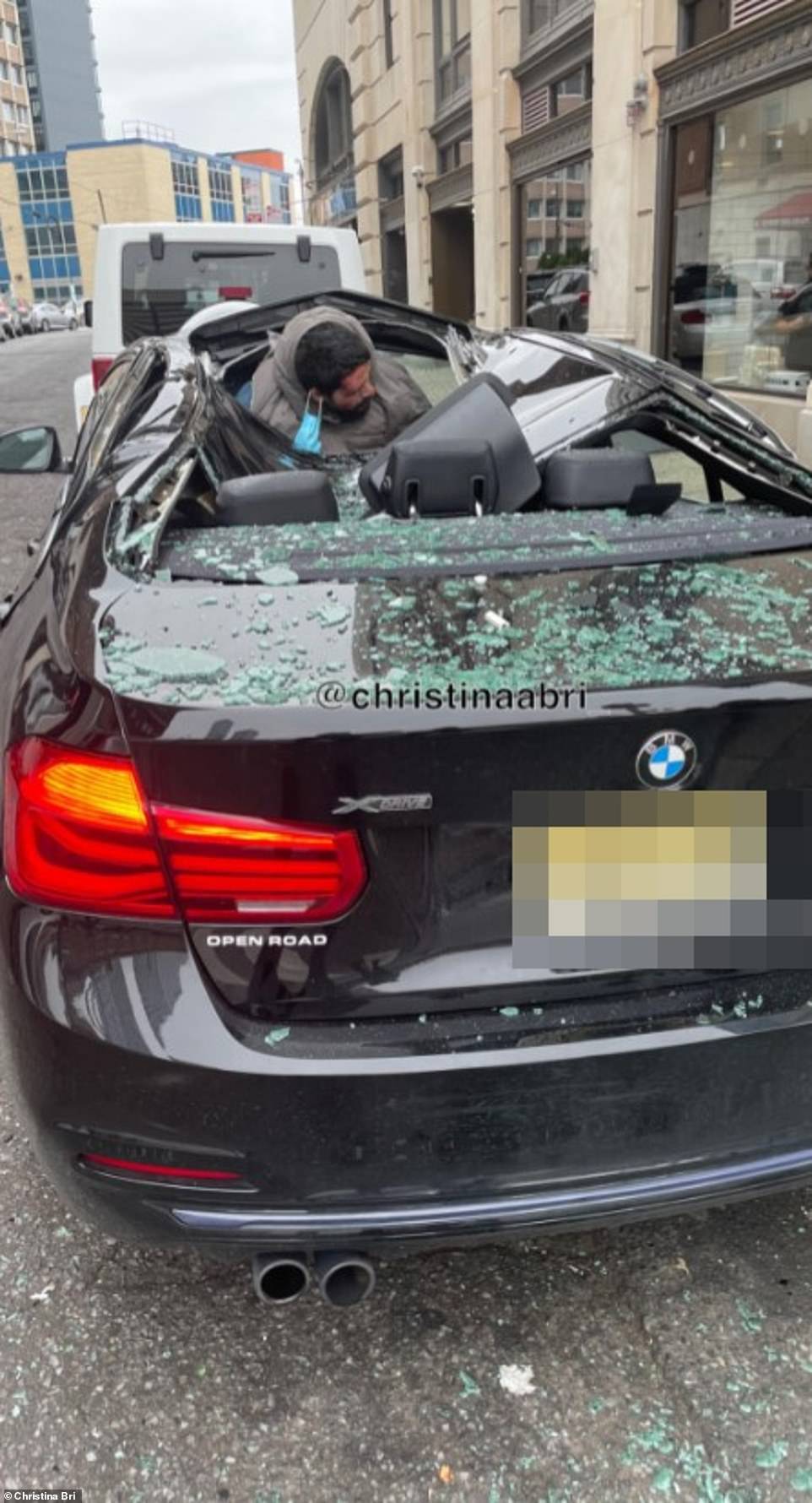 As he stood up, with shards of glass and the broken car roof surrounding him, the man saw that his right arm was broken and asked witnesses: ‘What happened?’ 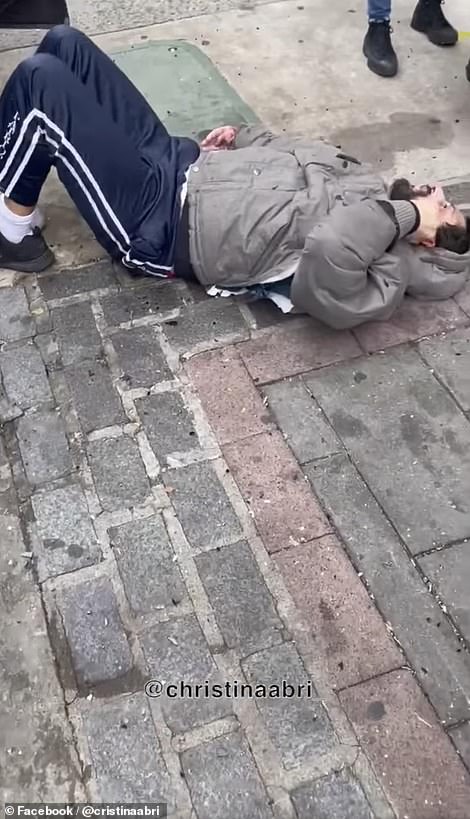 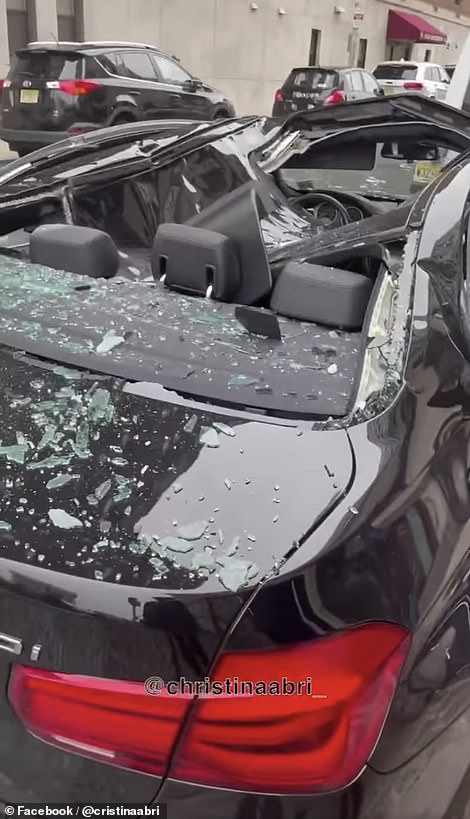 ‘I heard a big boom and I didn’t think it was a person at first,’ Christina Smith, 21, who saw the man fall from the high-rise building at 26 Journal Square, told the New York Post.  ‘The back window of the car just busted out – exploded.’

Smith told DailyMail.com she initially thought the bang was a bird but as soon as she saw the injured man, she called 911.

She said: ‘Then the man jumped out of the car and threw himself on the ground screaming “What just happened?” and asking for help,’ adding that the man’s arm ‘was all twisted’.

Smith added: ‘I was trying to calm him down because his arm was broken very badly. I recorded the scene and I was in disbelief because I’ve never seen anything like that.’

‘I was like, “Oh my God!” I was shocked. It was like being in a movie,’ Smith, who had been walking to a nearby McDonald’s at the time, added.

Smith called the police before taking images and videos of the aftermath of the fall.

The man was seen struggling to stand up from the car, after falling through the roof and appearing to land by the front seats. He was seen wearing a bloodied facemask, which was still hanging from his left ear, with blood on his forehead. 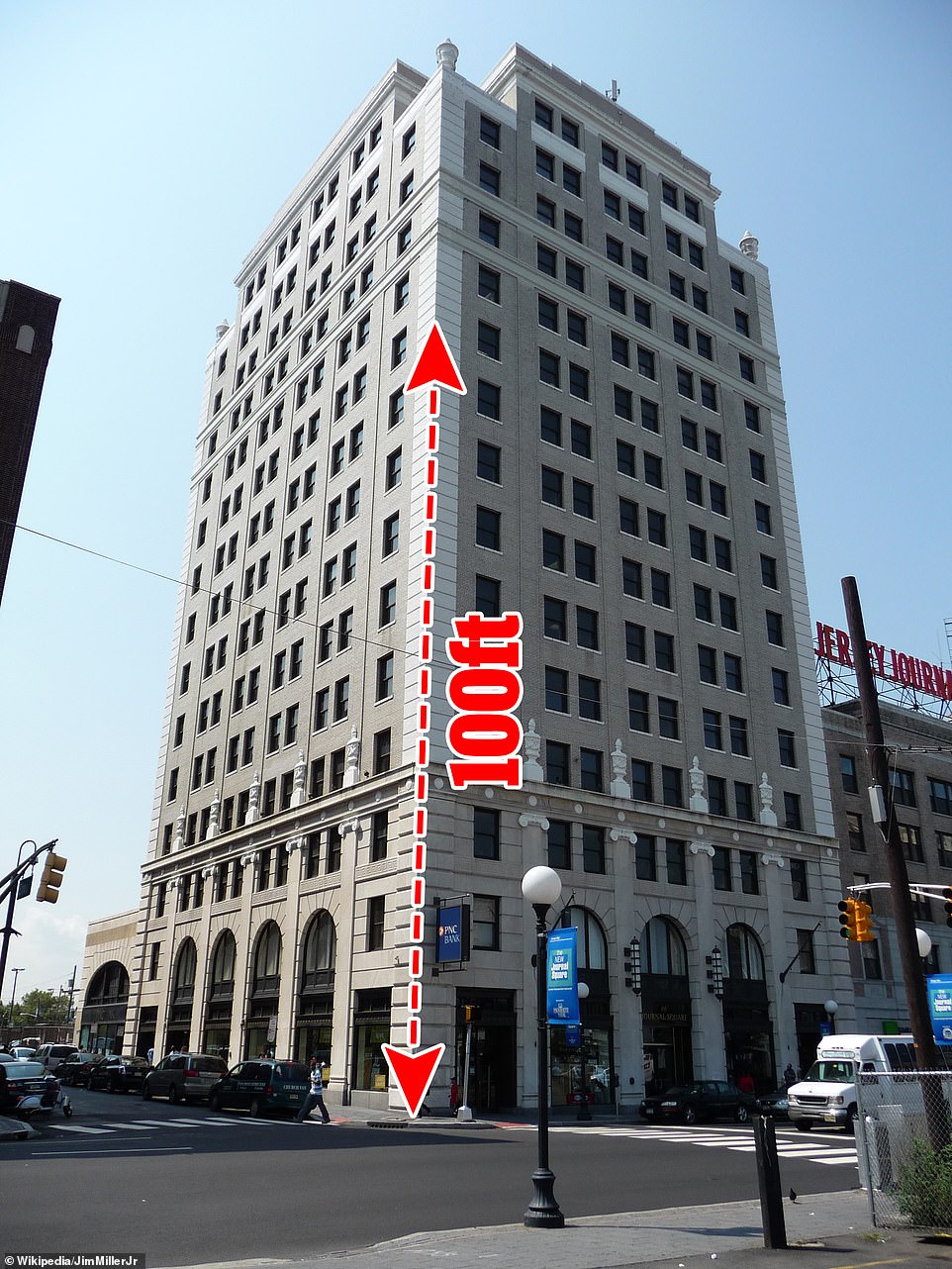 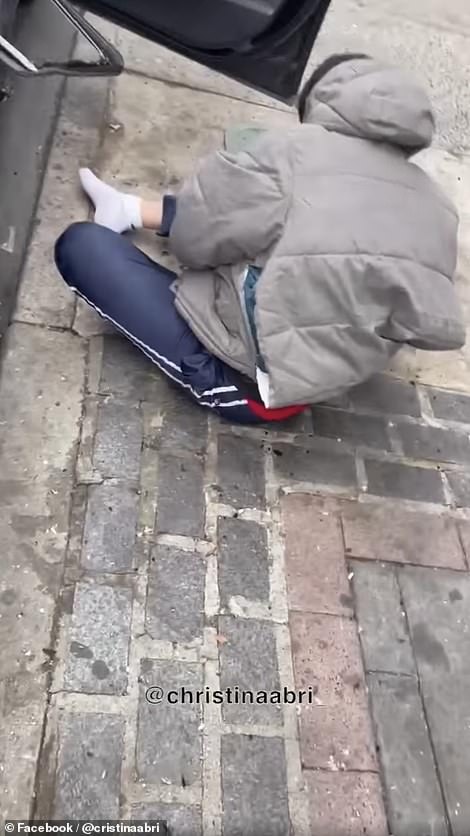 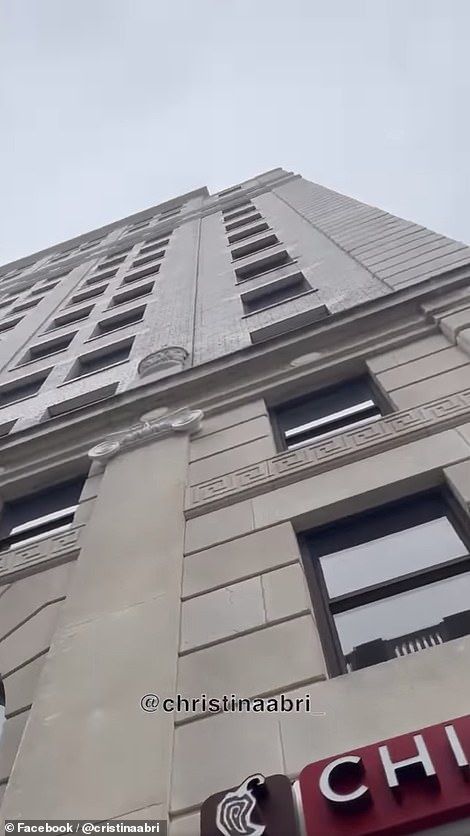 Graphic video footage then shows the man rolling around in pain on the pavement before he was rushed to hospital in an ambulance in a critical condition, said Jersey City spokeswoman Kimberly Wallace-Scalcione said.

‘I was thinking, thank God, it probably helped that he had a fluffy jacket on,’ Smith, who works in sales, said while adding that she believed the coat may have saved him from more serious injuries.

Witnesses and workers at the building told the Post the man did not work inside the building and it is unclear why he was there.

He also refused to give police officers his name, a source said.

‘He fell into the car through the sunroof, then climbed out of the car and fell on the ground,’ said Mark Bordeaux, 50, who works in the building and saw the aftermath.

‘So he stayed there until the police and ambulances came. He kept saying, “Leave me alone, I want to die.” You saw one of his arms was clearly broken, but he was conscious, he was moving,’ he said.

‘He wanted to die. That was his agenda. But God had something else in mind.’

For help and support in the US contact the National Suicide Hotline at 1-800-273-8255 or visit its website.

For confidential support in the UK call Samaritans on 116123, go to samaritans.org or visit a Samaritans branch.

The 5 emotional stages of lockdown have been revealed