Nearly 90% of 7,000 neighbourhoods in England and Wales saw NO Covid deaths in April: Interactive map shows how virus fizzled out last month with Covid dropping to the NINTH leading cause of death – so how many people died in YOUR area?

England and Wales’ rapidly shrinking Covid outbreaks were today laid bare by an interactive map that showed nearly 90 per cent of more than 7,000 neighbourhoods saw no deaths from the virus last month.

Office for National Statistics (ONS) data reveal April was the first month since August last year where deaths were below the five-year average, with fewer than 1,000 virus-linked fatalities.

MailOnline analysis shows the proportion of English and Welsh neighbourhoods with zero deaths increased from 57.9 per cent in March to 87.6 per cent last month — some 6,301 areas.

Just ten areas saw three deaths each, which was the highest amount for any postcode.

They were: Hounslow West in London, Summerfield in Birmingham, Woodthorpe and Arno Vale in Gedling, Great Sankey in Warrington, Birley in Sheffield, Stornton and Sixfields in Northampton, Grimsargh and Goosnargh in Preston, Rusper, Faygate and Leechpool in Horsham, Bridlington West in East Riding and Canvey Island South West in Castle Point.

The ONS data also revealed that Covid was just the ninth leading cause of death in England last month — its lowest ranking since September 2020. Heart disease and dementia were the leading killers.

A total of 941 deaths were due to coronavirus in April, the equivalent of 2.4 per cent of all deaths registered in England. Another 35 were recorded in Wales.

It comes as separate data ZOE and King’s College London today showed Britain’s Covid outbreak is staying flat at 2,750 cases a day, despite the spread of the Indian variant. Experts estimated the equivalent of one in 1,796 Brits had symptomatic Covid in the week to May 15. This was not a significant change from the previous week.

Professor Tim Spector, the epidemiologist who leads the app, said the mutant strain ‘hasn’t altered the numbers significantly’ and that outbreaks remain focused in local areas. 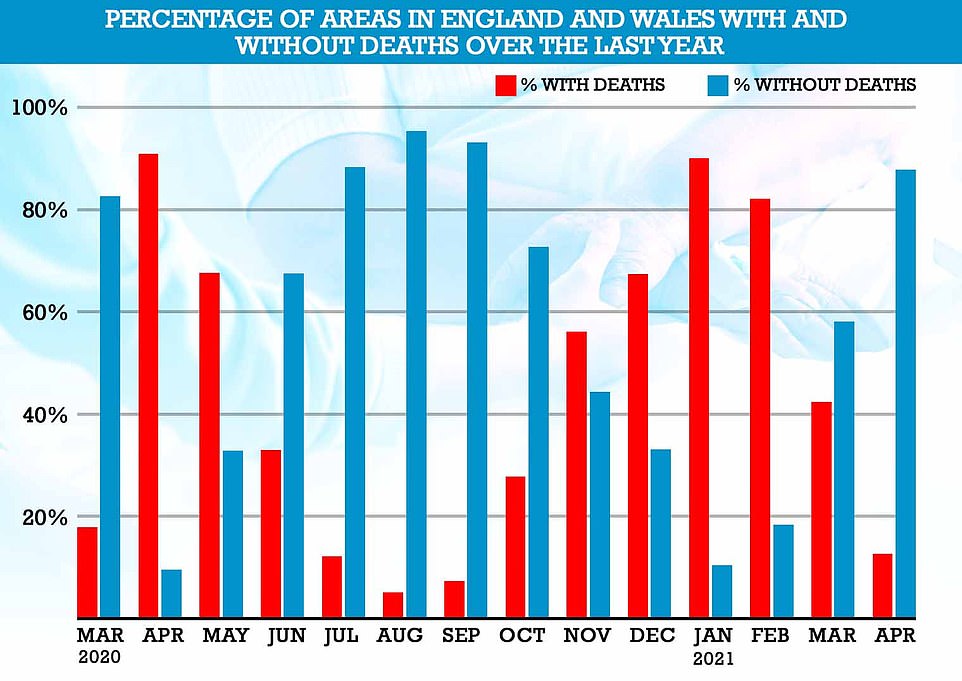 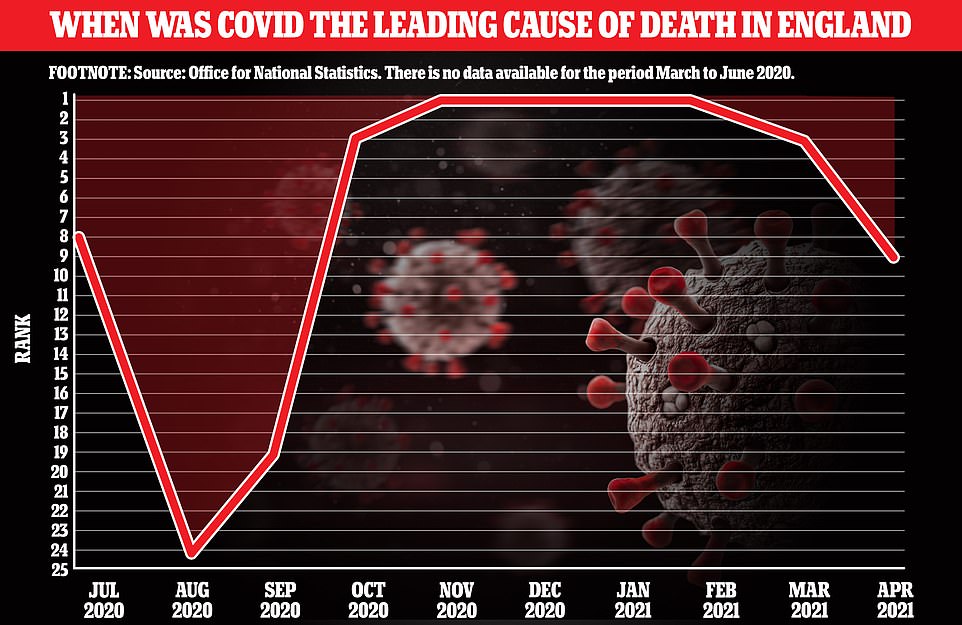 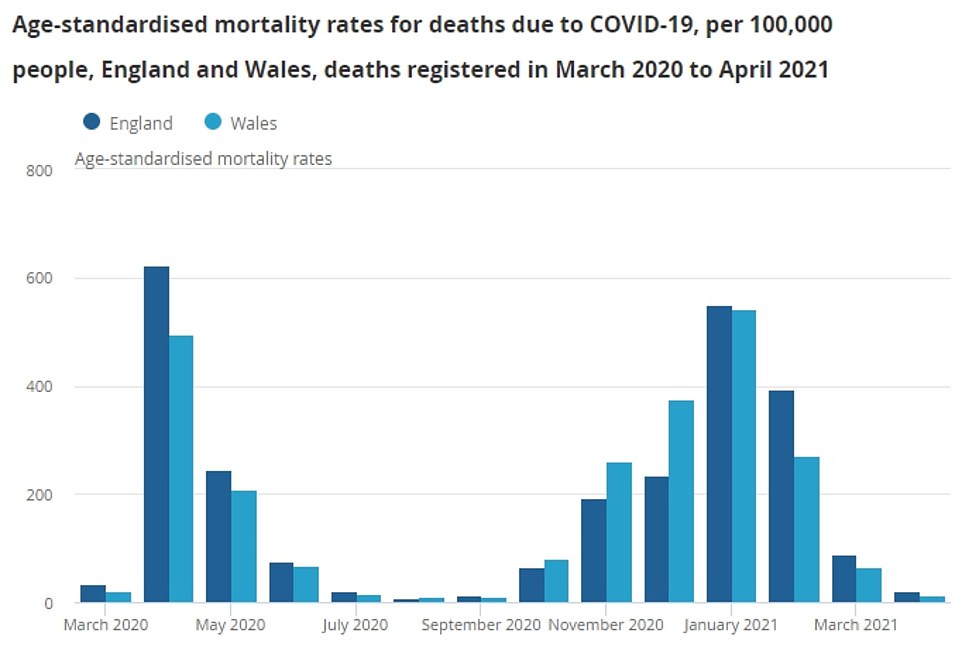 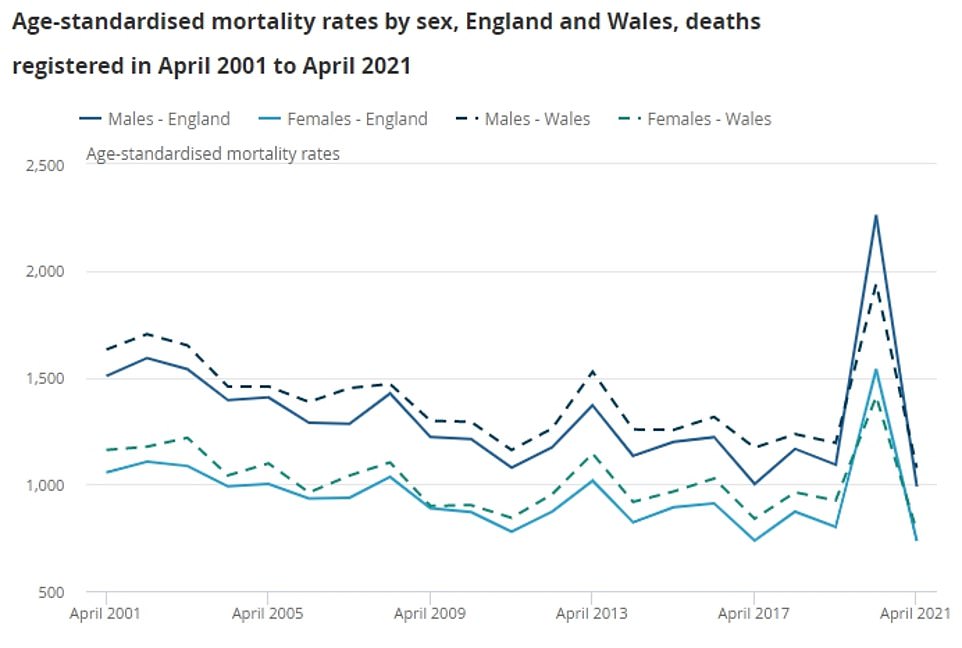 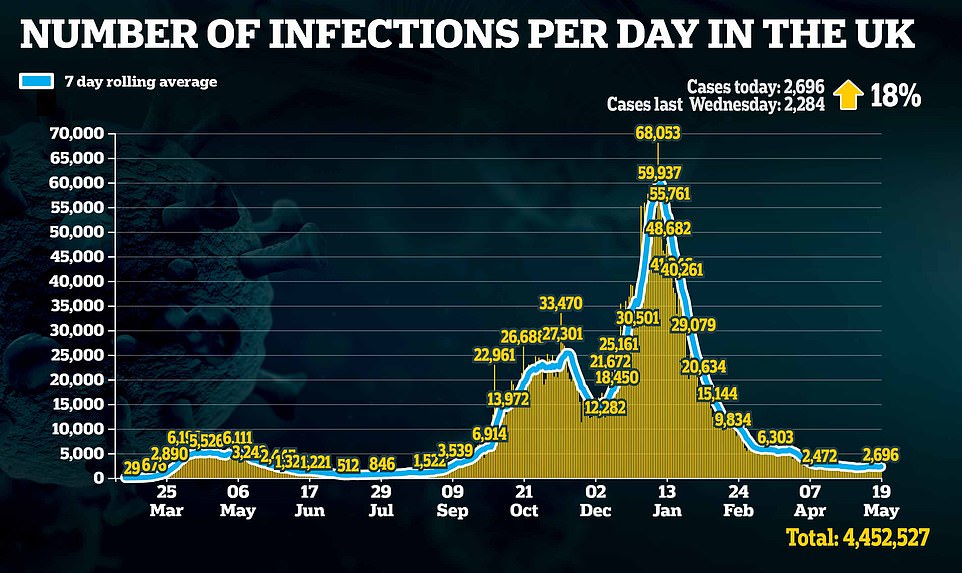 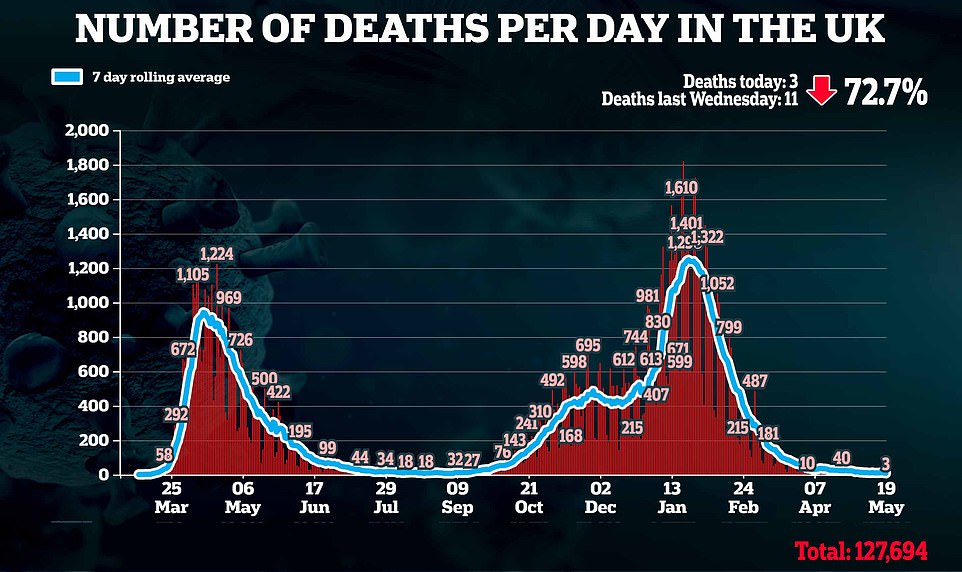 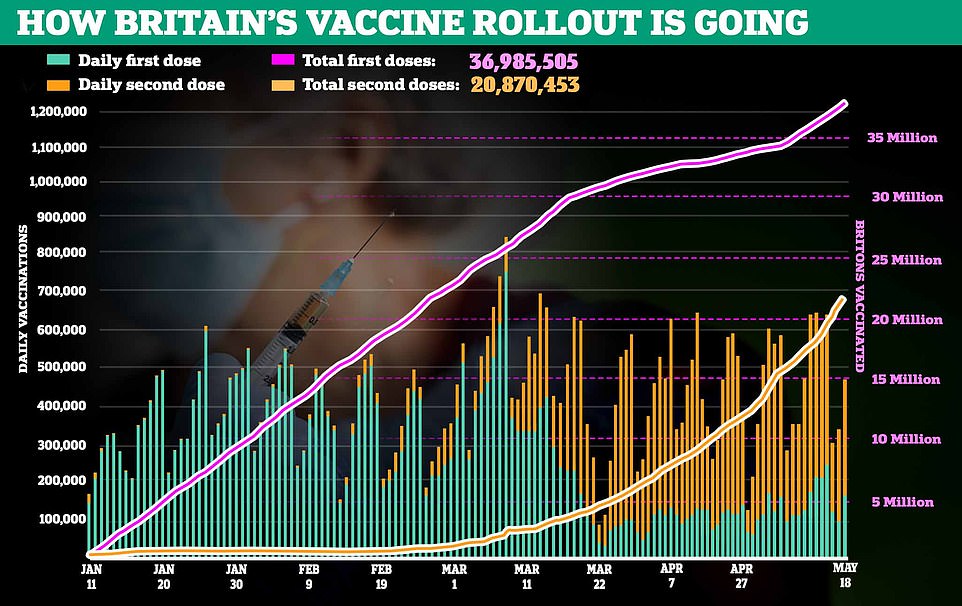 The leading cause of death was ischaemic heart diseases (4,144 deaths), followed by dementia and Alzheimer’s disease (4,018 deaths).

Covid was the leading cause of death in England every month from November 2020 to February 2021. In March it dropped from top spot to third place, before falling to ninth place in last month.

April was also the first month where deaths in England were below the five-year average (6.1 per cent lower) since August 2020, the ONS said.

The overall mortality rate was 851.2 deaths per 100,000 people: the lowest mortality rate for the month of April since the ONS data time series began in 2001.

In Wales, Covid was the 18th leading cause of death in April, accounting for 35 deaths, or 1.4 per cent of the total. Ischaemic heart diseases was the leading cause (300 deaths), followed by dementia and Alzheimer’s (267). 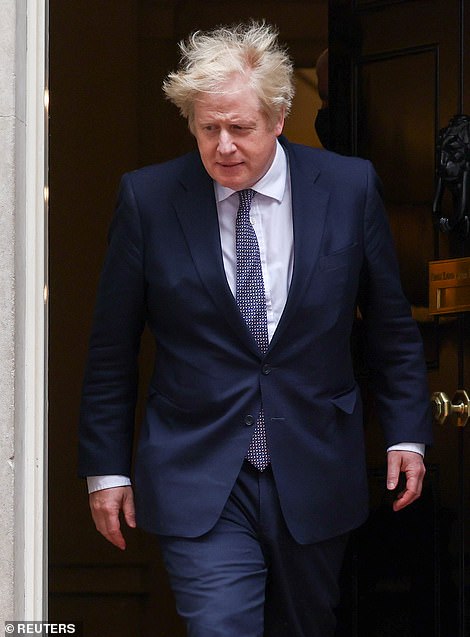 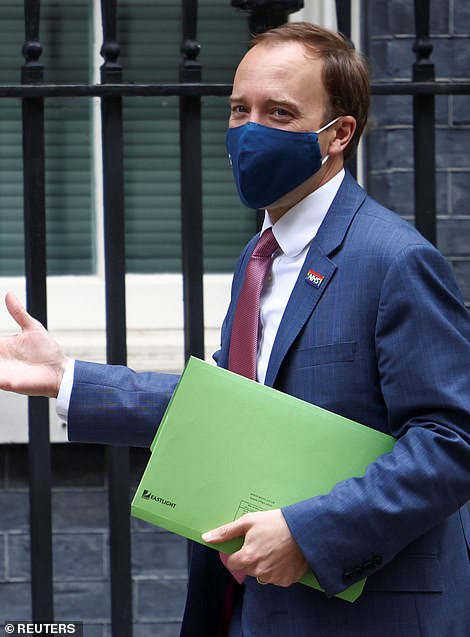 Boris Johnson (pictured left, leaving No10 today) last night told MPs he is ‘even more optimistic’ the June 21 lockdown easings can go ahead. Matt Hancock (pictured right, on Downing Street today) revealed to MPs yesterday are now almost 3,000 cases of the Indian variant in the UK, with the figure having quadrupled in a fortnight 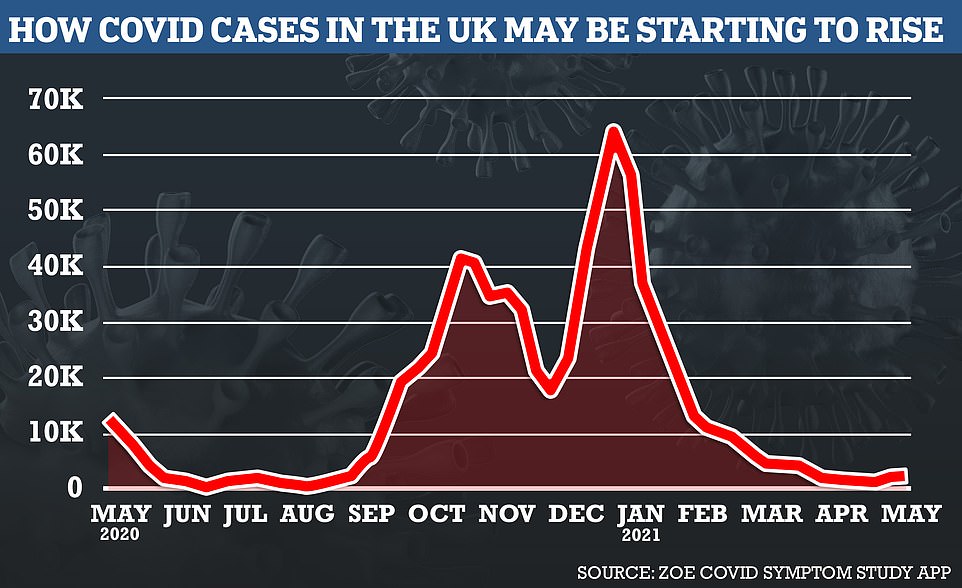 ZOE and King’s College London’s symptom tracking app estimated there were 2,750 new cases of the virus every day, the equivalent of one in 1,796 Britons suffering symptomatic Covid in the week to May 15. They said this was not a significant change from last week. Professor Tim Spector said the Indian variant ‘hasn’t altered the numbers significantly 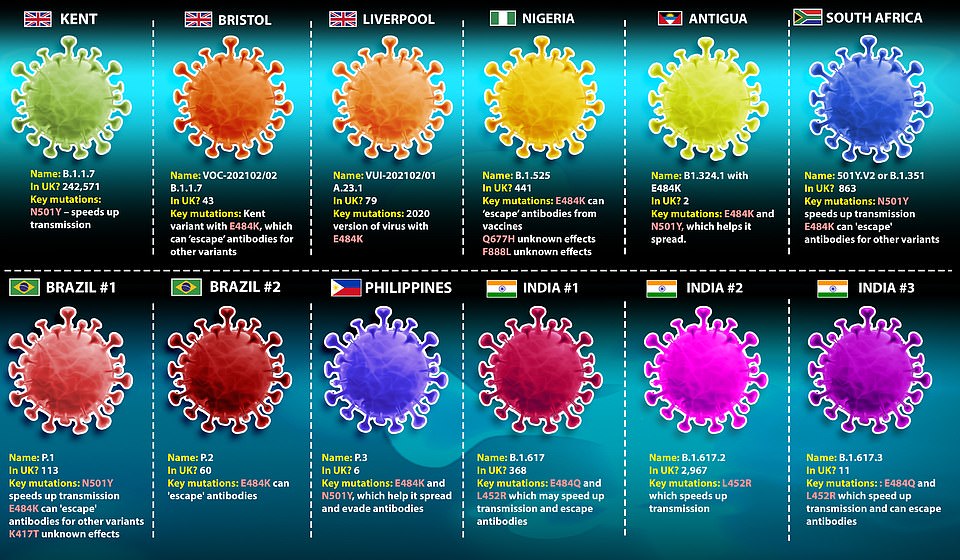 Officials say the Indian variant of Covid may have spread rapidly in the UK because it got into multi-generational households, and there were a large number of imports as people rushed home after India was added to the ‘red list’

Boris Johnson last night told MPs he is ‘even more optimistic’ the June 21 lockdown easings can go ahead.

The Prime Minister revealed to the powerful 1922 committee of Tory MPs last night ‘we can see nothing to suggest that we have to deviate from the road map’. He added he was ‘increasingly optimistic’ that the current crop of vaccines could still beat the strain.

One senior official told Sky News that the updated estimate would allow the June 21 unlocking to go ahead, despite fears the rapid spread of the B.1.617.2 variant had derailed the plans. Matt Hancock said last night no decision on relaxing the final set of restrictions will be made until June 14, a week before ‘freedom day’

But the plans could still be diluted — which could see the end of social distancing, mask wearing and working from home guidance pushed back to a later date. Ministers are also considering asking high-risk venues such as nightclubs to ensure people are either vaccinated or tested before they enter.