Jealous lover, 49, who bludgeoned his girlfriend, 32, to death with a crowbar after sending sex tapes to her family to ‘create illusion’ she had a stalker is jailed for 23 years for murder

A jealous lover was today sentenced to 23 years in prison for murdering his fiancee after he sent sex tapes and intimate photos of her to her family to ‘create the illusion’ she had a crazed stalker then bludgeoned her to death.

Mark Brandford crushed Kayleigh Dunning’s skull in a ‘vicious’ attack the same night he proposed to her, having devised a ‘cold and calculated’ plan.

Today, a judge branded him ‘malicious and deceitful’ as he sentenced him to life with a minimum term of 23 years in jail. 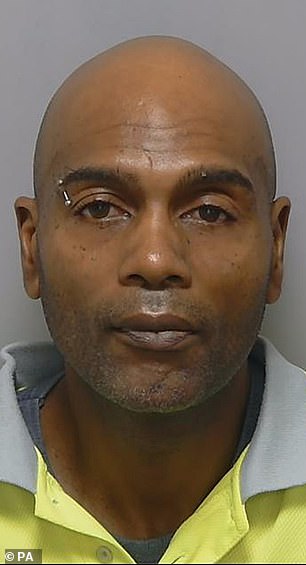 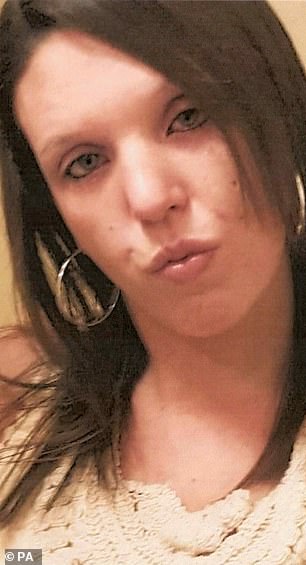 Mark Brandford crushed Kayleigh Dunning’s skull in a ‘vicious’ attack the same night he proposed to her, having devised a ‘cold and calculated’ plan at his home in Portsmouth on December 17, 2019

In the year before the 49 year old ‘brutally’ murdered Miss Dunning, 32, he created the impression she had a mysterious enemy by pretending someone else had stolen her phone and using it to share explicit videos of the couple having sex.

Brandford, a street sweeper, sent the images to the cleaner’s family and bosses as well as sending her anonymous threats including ‘I’m going to f*** you up big time’.

On the night of December 17, 2019, Brandford subjected Miss Dunning to a ‘ferocious’ and ‘prolonged’ attack at his home in Portsmouth, Hampshire.

But the following morning, just after 5am, Brandford left the house to ‘create a facade of someone going about his normal day’ by going to work, telling everyone he met about the engagement and watching his beloved Aston Villa on TV in betting shops.

When he finally returned home and called 999 at 9.40pm, he ‘staged’ a show by pretending to ‘go through the motions as this grief stricken fiancee’, even being seen by paramedics putting fingers down his throat to make himself gag.

Brandford was found guilty following a trial at Portsmouth Crown Court, Hampshire, of murder and of disclosing private sexual photos of her.

Today, Brandford was sentenced to life in prison, with a minimum term of 23 years minus any time he has already spent in custody.

Judge Timothy Mousley said: ‘You murdered Kayleigh in a sustained and very violent attack while she laid in the bed that you shared with her.

‘Your malice towards her became obvious long before you killed her. 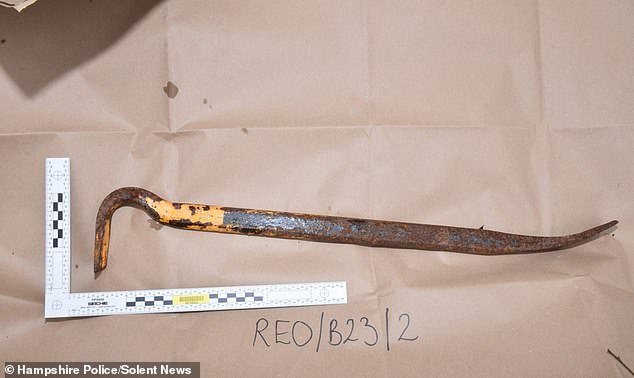 Brandford used this crowbar, pictured, to kill Ms Dunning. More than a year before the murder, Brandford set up a Facebook account featuring intimate images of Ms Dunning, claiming it was the work of a stalker

‘In October 2018 she lost her mobile phone she thought she left it in the back of a taxi. Within a matter of days you used the phone to send sexual images of her.

‘This was an indication of your deep feelings of jealousy and how you reacted to them.

‘In November 2018 you set up a fake Facebook account and uploaded intimate and sexual photographs of Kayleigh.

‘This was more than 12 months before you killed her but that action shows all the hallmarks of your seeking to control, to coerce her.

‘You wanted Kayleigh as a possession.

‘Your outwardly pleasant demeanour that people speak of hides a tendency on your part for sustained periods of extreme jealousy.

‘You were never going to control her. She was far too independently minded for that she was someone who enjoyed life.

‘It was a brutal attack on her… With great courage she tried to defend herself… but your attack was so ferocious it rendered her unconscious, immobilised and helpless. She didn’t stand a chance and it was quite clear that you intended to kill her.

‘This was pre-meditated and planned. There was the theft of the crowbar two months before the murder.

‘You are deceitful, you sought to implicate others and attribute racist comments to them… You are manipulative.

‘You have shown no emotion, let alone any remorse.’

Binge-watching is hazardous to health

Trump says he has ordered substantial increase in Iran sanctions