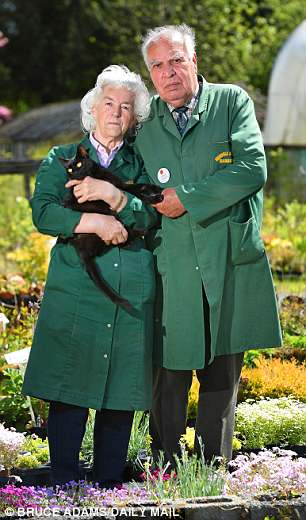 Graham Harper, 78, has run a nursery in Abermule, mid Wales, with his wife Margaret, 76, for more than 50 years

A couple who run a market stall have been told to take down a Vote Leave poster or lose their pitch.

Graham and Margaret Harper have used the placard as a windbreak while selling plants and vegetables.

But they were told by the manager of the market in Oswestry, Shropshire, to take it down last month because it was ‘political’.

Mr Harper complained but local councillors at a meeting held behind closed doors ruled he must remove it or leave the market.

In a letter, the town council clerk, said the sign was a contravention of policy that ‘no political publicity be displayed on any market stalls as this would be considered a breach of licence conditions.’ Mr Harper, 78, who has run a nursery in Abermule, mid Wales, with his wife, 76, for more than 50 years, said the move was an attack on free speech.

‘It is not even political,’ he said. ‘It is not supporting a political party and it is not about an election, it was a referendum.’

He said he felt he had no choice but to leave the market after 20 years because he would not take down the placard. ‘It is a matter of principle,’ he added. ‘It is a shame, because we have got to know a lot of very nice people over the years, and have a lot of loyal customers there.’

He said he was given the poster ahead of the June 2016 referendum.

‘I had it up at home first, then after the referendum I thought it would make a good windbreak, rather than it go to waste,’ he said.

‘It is side on, so it is not even in people’s faces. Most of our customers are older, and generally support Brexit, but even those who didn’t said we should have been allowed to keep it up. I thought it would be a talking point.

‘You would think the council would be more concerned about keeping traders than getting rid of them.’ 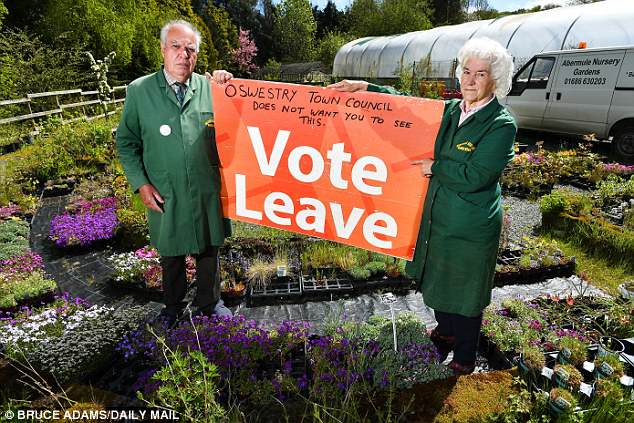 Mr Harper said he wanted to keep it up until Brexit had been ‘sorted out’ as a reminder that Britain was not out of the EU yet.

But town clerk David Preston said: ‘Mr Harper is a longstanding trader but the council has a policy of not using stalls for political purposes or expressing political views. It was a sign that received some complaints. We asked him to remove it.

‘He appealed and again the matter was taken to the council and the council agreed it would enforce its policy and asked Mr Harper to take down the sign. Mr Harper decided he would no longer come to the market.

‘He is a valued trader, we would like him to return and he would be welcome but obviously he must comply with the council’s rules and policies.’