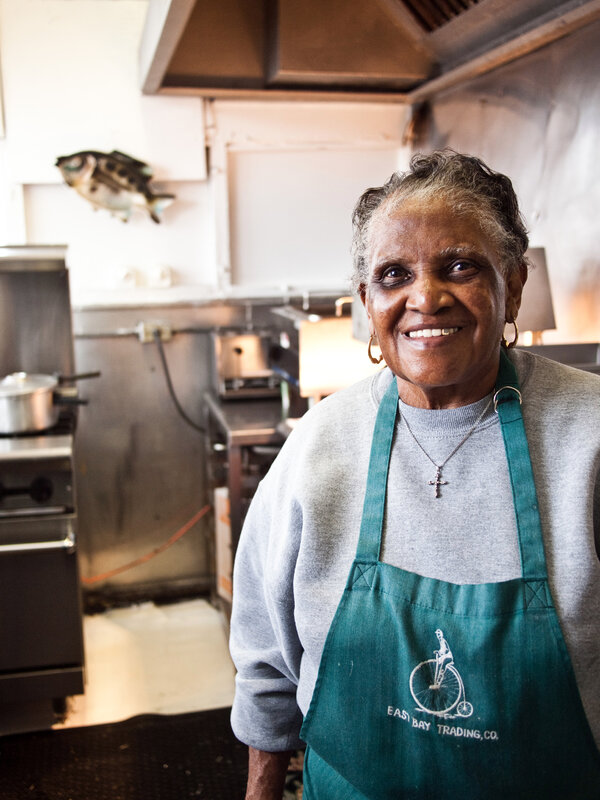 It would be impossible to add up all the meals Martha Lou Gadsden cooked over her lifetime.

She had to feed eight children and worked for years in other people’s restaurants. In 1983, she opened her own place in an old gas station amid a stretch of car dealerships just north of downtown Charleston, S.C. She called it Martha Lou’s Kitchen.

For the next 37 years she dished out home cooking to everyone from longshoreman to famous chefs, and became an essential figure in the preservation of Low Country cuisine.

Still, for all those plates of lima beans simmered with smoked pork neck and chicken fried to order, and all those bowls of red okra soup and oxtail stew, Mrs. Gadsden couldn’t give you a recipe if she wanted to.

“I work by air,” she told the oral historian Sara Wood in 2013. “I do not measure. I know what I want done, but to give you the recipe I’ll have to just make up one.”

Mrs. Gadsden died on Thursday at her home in Charleston. She was 91. Joyce Taylor, her eldest child, said that the cause has not yet been determined, but that Mrs. Gadsden had had both Covid and heart surgery in the fall.

Martha Lou Simmons was born in Charleston on March 20, 1930, to Joseph and Lillie Mae Simmons. Her father died when she was 5. Her mother stayed in Charleston to work and sent Martha Lou and her two siblings to live with their grandparents in Manning, a small town about 80 miles north of the city.

Mrs. Gadsden first learned to cook from her grandmother, but she didn’t get serious about it until after she started having children.

“I learned by doing,” she said in the 2013 interview for the Southern Foodways Alliance. “I’m a mother of nine children. So I had to learn how to cook.”

She moved back to Charleston after a year at Allen University, a historically Black private institution in Columbia, S.C., founded in 1870 to provide education to the formerly enslaved and their children, and gave birth to her first child.

She married James Gadsden, a carpenter and steeplejack, and the two had eight children together, one of whom died as an infant during a hurricane. They were married for 30 years but had separated before she opened her restaurant. He died in 2011.

Her first jobs were in Black restaurants popular during segregation, including the Ladson House and Dee Dex Snack Bar. In 1983, when she was 53, her children talked her into renting an empty gas station and helped her open her own place. She made $10 the first day selling hot dogs, hamburgers and soda.

She had the building painted bright pink. “The children said they like pink and pink is for love, so that’s why we got it pink,” she said in the 2013 interview.

With the smell of country cooking wafting from the vents, and with murals of notable Black landmarks on the walls inside and a portrait of Mrs. Gadsden on the outside, Martha Lou’s Kitchen quickly became a beacon for Black families and workers in the area.

A different wave of diners began showing up in the early 1990s, after The Post and Courier in Charleston singled it out as the area’s best soul food restaurant and other mainstream food and travel writers began to seek it out.

But the food was more specific than the term “soul food,” which doesn’t always reflect the regional and cultural differences of Black cooking in America, might suggest.

(The Gullah Geechee people are descendants of West Africans who were enslaved along the coast from North Carolina to North Florida and whose cooks created the peanut stews, okra-laced purloos and seafood that would come to define Low Country cuisine.)

Mrs. Gadsden always made sure rice and baked macaroni were available as side dishes, along with beans and greens she cooked in a long-simmering Southern style. Hers was one of the rare Charleston restaurants that took on the work to prepare chitterlings. People would drive from miles away to secure an order.

As Charleston’s tourist trade grew and new restaurants began to push out more traditional cooking, chefs like Sean Brock would make a point to urge visitors and journalists to take a seat at the handful of tables inside the pink building, and to eat Mrs. Gadsden’s food as a way to understand the importance of her style of Gullah Geechee cooking to the region’s culinary underpinnings.

It was not a place to be in a hurry. All her meat, with the exception of ribs and smothered dishes, was cooked to order — including her fried chicken, which was always the best-selling item on the menu.

Her secret was her seasoning, which she would mix up in large pickle jars, Ms. Taylor said.

Mrs. Gadsden always knew how she wanted things to taste. She was not afraid to tell her children, some of whom would eventually do much of the cooking, when something didn’t taste good.

“If it wasn’t done her way, my mom would show you right to the door,” her daughter Lillie Mae Gadsden said. Even toward the end of her life, when children and grandchildren were doing most of the cooking, she insisted on making the bread pudding and the cornbread, which began with a box of Jiffy mix.

Mrs. Gadsden was also a smart businesswoman who would shop for bargains and kept a close eye on her money.

“When tourists began seeking out her food, she raised her prices,” said Hanna Raskin, the food critic for The Post and Courier. “It was the most expensive soul food in town. I really respected her for that.”

“I probably spent more time in her kitchen, just talking about life and getting advice, than actually sitting down and eating,” BJ Dennis, a Gullah chef from Charleston, said in an Instagram post.

Martha Lou’s served its last meal in September 2020. Mrs. Gadsden’s longtime landlord sold the land to a developer, and the building was slated for demolition. She took it as a sign that it was time to retire.

“I’m too old to get started again,” she said.