A mass fight between brawling wedding guests saw attendees collapse through a table before one man screamed ‘you are a devil b***h’.

Two video clips from the party, which is believed to have been held in Surrey, British Columbia, Canada, on Saturday, show a brutal fracas in the middle of a wedding venue as well as a fight outside.

Guests are seen throwing punches and completely knocking over a table with wedding cake as the destructive fight spirals out of control.

In the second clip, several screaming female wedding guests are seen viciously punching and wrestling each other before a man begins hitting a woman. 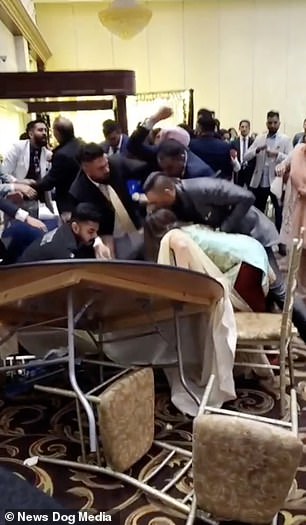 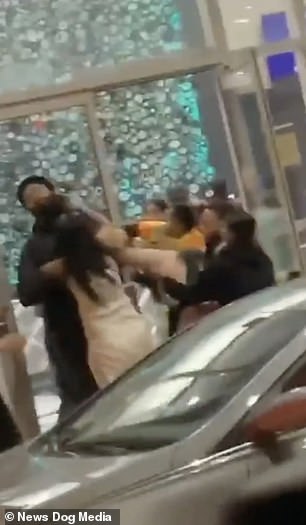 A mass fight between brawling wedding guests left attendees covered in blood after one man screamed ‘you are a devil b***h.’ Two video clips, believed to be from the same wedding in Surrey, British Columbia, Canada, surfaced on the weekend

The first video shows a mass brawl taking place in the middle of the wedding reception. Several male guests make a furious beeline towards a pair of men in a blue suit and a burgundy suit.

The group of males start throwing punches at the two men who dramatically crash into the table which collapses under the force of them.

A dish topped with wedding cake smashes and falls as the table is completely knocked over and destroyed.

The group of men continue beating and hitting the pair who lie on the ground with the broken table. One of the male guests is seen attempting to drag and pull the blue-suited man up so he can punch him further.

Screams are heard as the fight continues between the male guests. Wedding security staff and female attendees are seen trying to break up the brawl.

They briefly tear the scuffling guests apart. However when the men get up to their feet, they resume striking and punching one another as the clip ends. 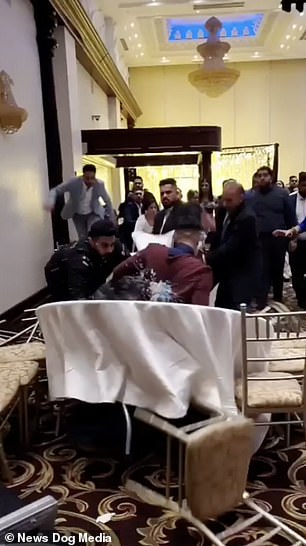 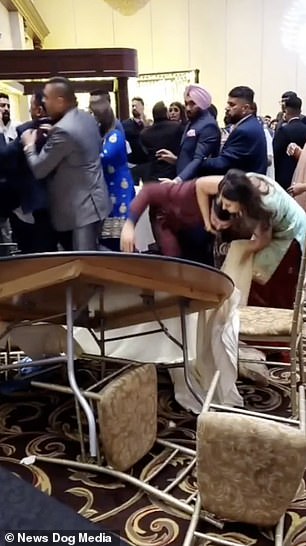 In the second clip, which is filmed by a onlooker in a nearby car, women are filmed fighting at the door of the opulent venue with some women behind the glass door inside and others outside. Hair-pulling and punches are being thrown between the female guests and the women can be seen grappling and wildly shouting with one another.

Several male guests try to break up the warring women and the same security guard from the first video is seen in the background. However after the men intervene, one of the women turns her angers towards them instead.

A woman in a cream salwar kameez outfit starts hitting a burly man in a sweater and slaps him across the face. 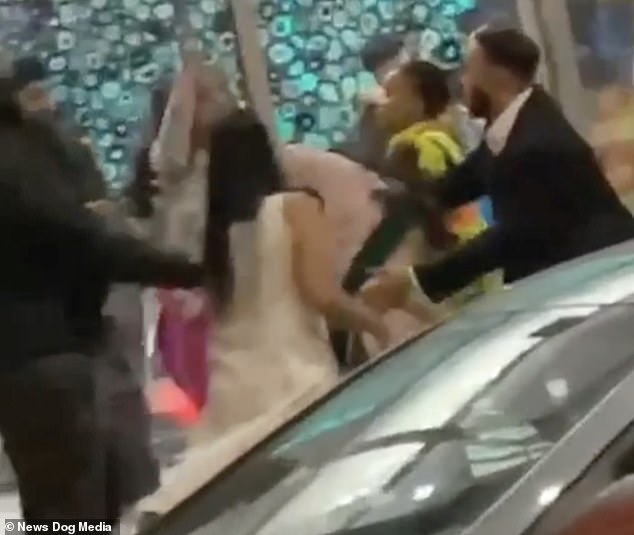 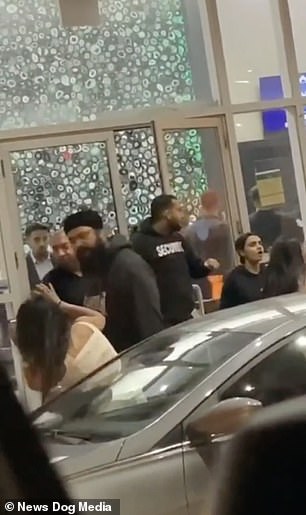 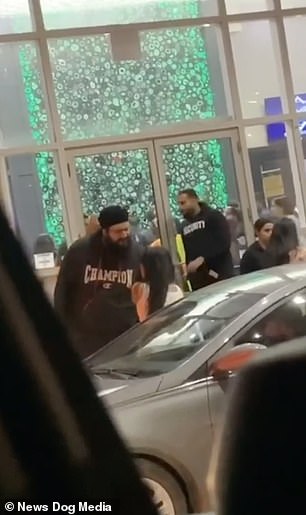 The woman in the cream salwar kameez outfit puts her hands out begging him to stop. He appears to scream at her: ‘You are a devil b***h’

The man is infuriated by this and throws the woman down to the floor and hits her in the face twice.

The woman in the cream salwar kameez outfit puts her hands out begging him to stop. He appears to scream at her: ‘You are a devil b***h’.

He then grabs her by her arm as she desperately tries to escape him however they both end up near the door and other guests. Another woman stops him but he continues to drag her away from the fight towards a car.

It is unknown why the fight started between the wedding guests.

Spain to vote against Brexit accord if text on Gibraltar not changed: PM