Home » World News » Maxwell not the only one who should be on trial, say Epstein victims

New York: Victims of Jeffrey Epstein have questioned why only Ghislaine Maxwell is on trial and not the other women who they say acted as his “groomers and recruiters”, as it emerged one is set to testify against the British heiress in court later this month.

Epstein’s alleged co-conspirators have been described as an organised network of underlings who reportedly received huge salaries and perks. 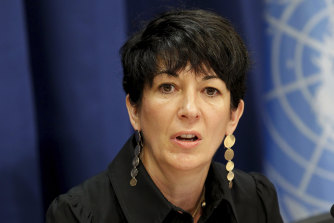 Ghislaine Maxwell, pictured in 2013, is on trial over claims she groomed underage victims to have unwanted sex with Jeffrey Epstein.Credit:AP

Prosecutors will argue Maxwell had three “accomplices” – Epstein and two others whose identities are being protected. It appears they are now cooperating with the US government.

Any such testimony by the women against Maxwell could be explosive. Maxwell, 59, had requested that prosecutors name the two “co-conspirators” to avoid being ambushed at her trial. “It doesn’t seem right that only Maxwell is in the dock,” said one victim.

“There were others who facilitated the abuse and this makes it seem like it was only her.”

Spencer Kuvin, a lawyer representing another victim, said: “[They were] intimately involved in the scheme to lure young girls to Epstein’s mansion.”

David Boies, an attorney for a number of victims, said it would be a “miscarriage of justice” if the “co-conspirators” were not “called to account”. 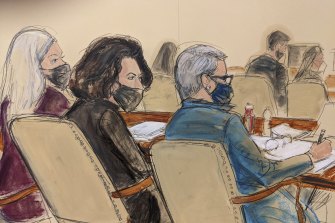 Court documents refer to evidence in the form of emails between Maxwell and one of the co-conspirators-turned-government witnesses.

“Apparently the government thinks that discussions of adult women is a ‘motive’ or ‘intent’ to groom underage females,” Maxwell’s lawyers say of the contents of the emails in the filing. “This court should reject the belated, insufficient, improper argument that the emails are direct evidence of the charged conspiracy.”

Maxwell, who has been in federal custody in Brooklyn since her arrest in July 2020, is charged with grooming and recruiting girls as young as 14 for Epstein to abuse in a sex trafficking conspiracy. She has pleaded not guilty.

Her lawyers have argued that the Manhattan US attorney’s office only pursued her after Epstein’s death and that she is being scapegoated.

It came as Maxwell’s lawyers on Friday filed a subpoena for documents related to the settlement fund for Epstein’s victims.

The victims’ fund, managed by Epstein’s estate, paid out nearly $US125 million to more than 135 people before it closed in August.

If victims accepted a settlement offer, they must waive the right to sue Epstein’s estate and “related entities and/or individuals,” including Maxwell. It is understood at least one of her accusers had sought compensation from the fund.

Roses for Valentine’s Day? Expect to pay more and get less, says florist