‘It’s a muddle’: Theresa May is warned not to revive plans for a controversial ‘customs partnership’ at this week’s Brexit showdown

Theresa May was warned last night not to revive plans for a controversial ‘customs partnership’ at this week’s Brexit showdown.

Downing Street was tight-lipped yesterday about its plans for a ‘third way’ on future customs arrangements with the EU, which is designed to break months of Cabinet deadlock.

But reports yesterday said Number 10 was planning to revive parts of the ‘customs partnership’, under which the UK continues to apply EU tariffs after Brexit.

Backers of the idea, including Business Secretary Greg Clark and Chancellor Philip Hammond, claim it would minimise disruption for big corporations that move goods across the EU. 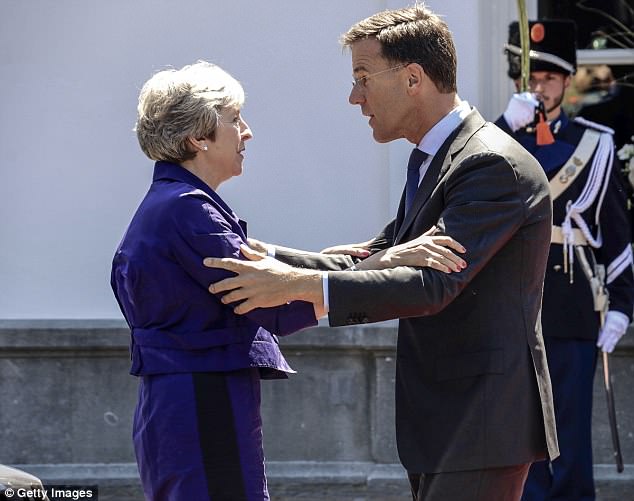 But opponents, including Boris Johnson, Michael Gove and Liam Fox, warn the plan would wreck hopes of the UK striking new trade deals and leave Britain shackled to Brussels forever.

Veteran Eurosceptic Bernard Jenkin last night urged Mrs May not to revive the plan, saying: ‘The Government would be playing into the hands of the EU.

This deal would deliver Brexit but without any of its freedoms or advantages.’

Jacob Rees-Mogg, chairman of the European Research Group of Eurosceptic Tory MPs, warned the proposal was unacceptable, adding: ‘The third way was one of Tony Blair’s great theories. It was a muddle then and it’s a muddle now.

‘The third way is not leaving the EU. What is being proposed, which I hope is not accurate, would be a deeply unsatisfactory non-Brexit.’ 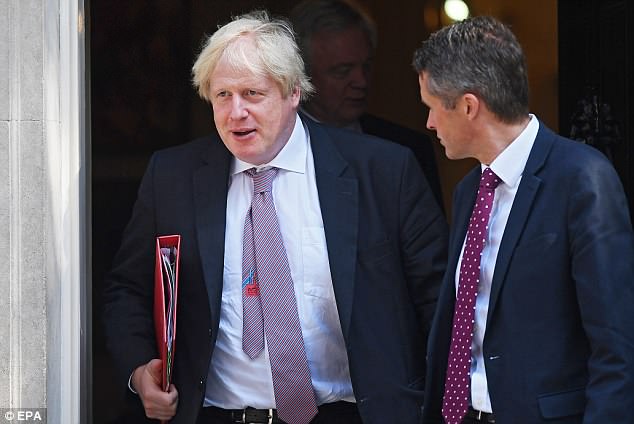 Mr Rees-Mogg said the Tories had to stick to their manifesto pledges of taking the UK out of the single market and customs union, adding: ‘There is a contract with the British people and that contract needs to be fulfilled.’

The full Cabinet will gather at Chequers on Friday in a bid to thrash out an agreement on what the Government wants from Britain’s future relationship with the EU.

They have not been briefed on any alternative to the ‘new customs partnership’, which would see the UK collect tariffs on behalf of the EU, or the Brexiteers’ favoured ‘max fac’ model involving streamlined arrangements and the use of technology to reduce delays. 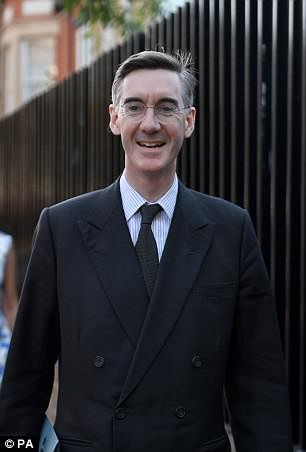 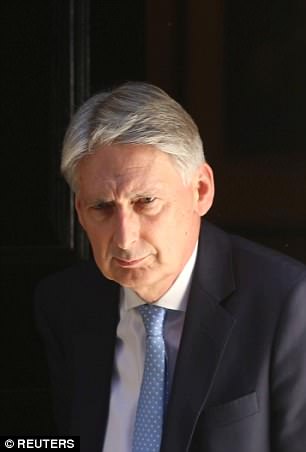 This could involve a future role for the European Court of Justice – a red line for many Eurosceptics, and a line Mrs May has said she will not cross.

Mr Hammond yesterday told MPs he would be dusting down the Treasury’s notorious assessment of the impact of Brexit on the economy, which formed the basis of the Project Fear campaign.

He would brief the Cabinet on ‘the Treasury’s assessment of the implications of potential routes forward.’

The Chancellor said he shared many of the concerns of the British Chambers of Commerce about the need to ‘minimise frictions’ on trade with Europe and give business clarity about the Government’s plans. ‘We recognise that we need to make progress,’ he said.

Britain’s biggest union has piled pressure on Jeremy Corbyn by saying it is open to a second Brexit referendum.

Labour’s leader – viewed as a supporter of leaving the EU – has refused to commit the party to a second vote, saying the people’s will should be respected.

But Len McCluskey, the hard-Left leader of Unite, said yesterday it could support a vote on the deal Theresa May reaches with Brussels.

The union’s policy conference backed a statement implying it wanted to stay in the single market. It said: ‘We are also open to the possibility of a popular vote being held on any deal, depending on political circumstances.’

Mr McCluskey told the conference that Brexit was turning into a ‘nightmare’, with the shadow of job losses hanging over British industry.

He claimed Mrs May had lost all authority or capacity to make decisions. ‘She is held prisoner by the dogmatists and fantasists of the far right,’ he said.

Tory divisions over Brexit continued to intensify yesterday despite appeals for calm.

Former justice minister Phillip Lee, who resigned from the Government over the issue, accused Mr Rees-Mogg of plotting a ‘coup’ against Mrs May. He said there was ‘no doubt’ that Eurosceptics were mobilising.

Referring to disputed claims that supporters of Mr Rees-Mogg have amassed a £750,000 war chest, Dr Lee said: ‘The last thing we need is a leadership challenge. But when an MP and his supporters have collected £750.000 to do just that, there is no doubt that Brexiteers are planning a coup.’

Mr Rees-Mogg denied all knowledge of the fund and insisted that his interventions were designed to stiffen Mrs May’s resolve to stick to her own pledges.

‘I am trying to support her against the naysayers, some of whom, unfortunately, are in the Cabinet,’ he said.

Meanwhile, European leaders piled pressure on Mrs May to reveal more details of her stance in a long-awaited White Paper on Brexit.

Dutch PM Mark Rutte, who held talks with Mrs May in The Hague yesterday, said: ‘We urgently need clarity about every aspect of the future relationship between the EU and the UK.’

Enter the Age of the Vaccine Selfie