West Australian Premier Mark McGowan and Qantas chief Alan Joyce have “kissed and made up” after two years of friction over the state’s COVID-19 hard border.

Joyce appeared alongside McGowan in Perth on Friday to announce new non-stop international routes from Perth to Jakarta and Perth to Johannesburg starting in November. 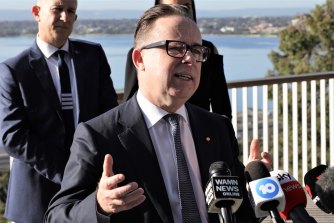 The pair revealed they’d had “hazy” dinner recently with members of the WA cabinet and Perth Airport bosses during which the final details of the new routes, supported by “modest” subsidies from the state government, were worked out.

Relations between the national carrier and McGowan hit rock bottom in February after the McGowan government delayed bringing down the hard border by a month and Joyce likened WA to North Korea.

But their relationship has turned around, with McGowan saying the hatchet was so far buried “we can’t even find it”.

“Alan and I have kissed and made up,” he said.

“[During] COVID lots of things were said by lots of people all over Australia at that point in time, but the reality is for Western Australia we came out of it incredibly strong.”

McGowan said the pair joked about Joyce’s North Korea comments at the dinner.

“We did actually have a discussion about North Korea, I was actually saying how Alan’s glasses and hairstyle is very similar to Kim Jong Un,” he said.

“The other details of the discussion are a little bit hazy to be honest. 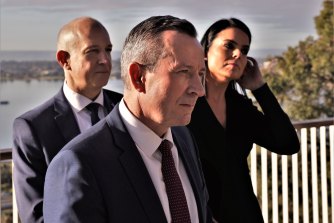 Mark McGowan said he had “kissed and made up” with Joyce. Credit:Hamish Hastie

Joyce said “bygones were bygones” and lavished praise on the premier.

“The hatchet, as the premier said, is well and truly buried,” he said.

“I actually think Mark is one of, if not the best politicians easily in the country at the moment.

“What has happened with the economy here, I think is the envy of the world and that is a great foundation for us to grow on.”

Joyce also said the company was having much more constructive dialogue with Perth Airport, which lost a legal challenge over aviation fees in the WA Supreme Court in February.

“We’re making good progress and we hope to be able to build on this announcement today to do a lot more internationally out of Western Australia,” he said.

Joyce and McGowan along with a group of media and bureaucrats will board the first-ever direct commercial flight from Australia to continental Europe on Saturday morning.

The Perth to Rome flight will run as a trial until October with McGowan hoping it will be successful enough to continue permanently.

Both McGowan and Joyce also expressed interest in a direct Perth to India flight but Joyce said it would not be until the delivery of its next fleet of aircraft in at least 2025.

7 Holiday Decor Essentials We Found on Amazon — Starting at $10!