Meghan Markle’s personal assistant handed in her notice after the royal ‘left her in tears with her demands’, it is claimed

The Duchess of Sussex, Meghan Markle, is said to have left her personal assistant in tears with her demands, it has been claimed.

After working with the royal for just six months, Melissa Toubati handed in her notice because it had gotten ‘too much’ for the 39-year-old, it is claimed.

A source close to the matter said: ‘Her job was highly ­pressurised and in the end it became too much. She put up with quite a lot. Meghan put a lot of demands on her and it ended up with her in tears.

‘She is hugely talented and played a pivotal role in the success of the royal wedding. She’ll be missed by everyone in the household.

‘Melissa is a total professional and fantastic at her job, but things came to a head and it was easier for them both to go their separate ways,’ a source told the Mirror.

When she resigned as Meghan’s personal assistant, a palace source was authorised to praise her and the role she played organising the royal wedding, which took place in May and attracted many famous faces including Robbie Williams and wife, Ayda Field. 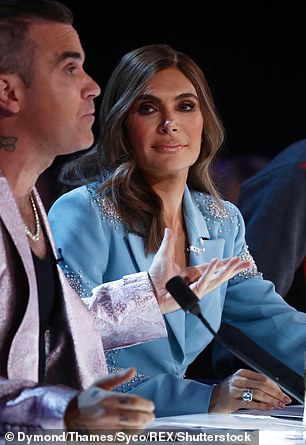 Melissa Toubati had previously worked for Ayda Field (pictured above) and her husband Robbie Williams (left), both of which had been invited to the royal wedding earlier in this year

Royal biographer Robert Jobson detailed the run-up to the wedding in ‘Charles At Seventy’ and had claimed Meghan’s wedding preparations had been so stressful that Harry had become ‘petulant’ with staff.

‘Raising his voice on ­occasion, Harry would insist: ‘What Meghan wants, she gets.’

However one royal source leapt to Meghan’s defence yesterday and told the Mirror: ‘She is simply not afraid to express her opinion.

‘While many find her a little pushy there are many in the royal household who have quickly taken to her.’

News of the reason of her resignation from the royal house comes amid a myriad of reports about 37-year-old Meghan’s behaviour towards members of staff.

Earlier this week it had emerged that the former ‘Suits’ star had thrown a hissy fit prior to her marriage to Prince Harry as she was unhappy with the ‘musty’ smell in St George’s Chapel. It was alleged that she had demanded air fresheners in Windsor Castle, but that courtiers had rebuked her.

It has also been claimed that Meghan can be rather demanding of staff, and it has been rumoured that she emails requests to staff in the early hours of the morning.

However, Miss Toubati is not the first to have been left in tears by the new royal, as it has also been claimed that her head-on approach had led to a fall-out with the Duchess of Cambridge, Kate Middleton.

The 36-year-old had reportedly been left in tears by Meghan’s demands over Princess Charlotte’s bridesmaid dress.

There could be truth in such rumours as Kensington Palace has now revealed that Harry and Meghan are now set to move to Frogmore cottage in Windsor and will no longer be neighbours with Kate and Prince William.

Meet the Designer Behind Beyoncé and Madonna’s Dreamy Body Jewelry