Meghan Markle’s ex-husband, Trevor Engelson, is reportedly fleeing the country ahead of the royal wedding.

The film producer, who was married to the Suits star for two years before their divorce in August 2013, is hoping to escape the media circus surrounding tomorrow’s wedding between Meghan and Prince Harry with a trip overseas.

‘Trevor is heading out of the country this weekend to escape the mania,’ a source told Us Weekly, adding that he may be headed to South America. 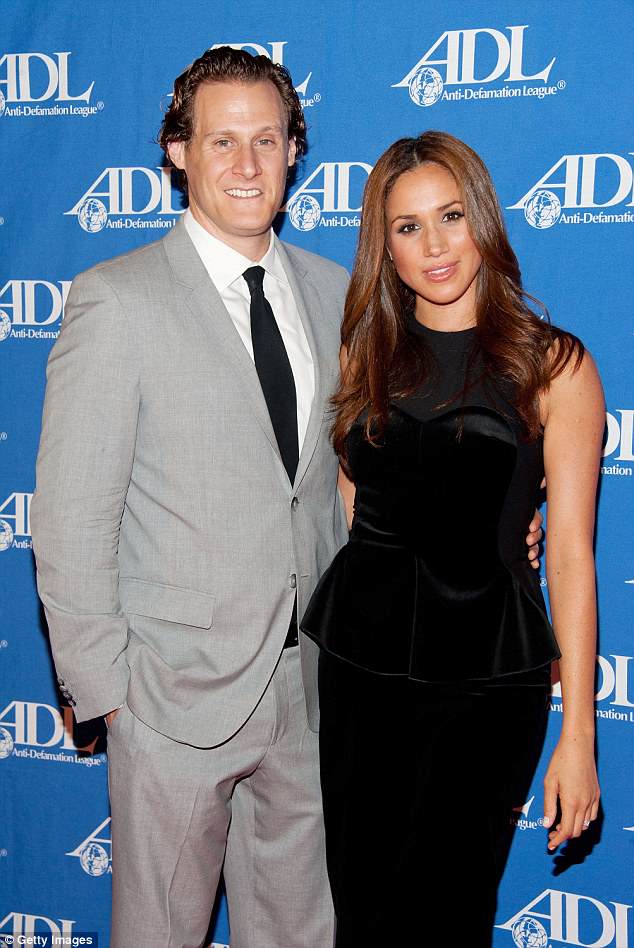 Trevor first met Meghan in 2004, when she was just 23, shortly after she entered the film industry. He acted as her mentor in the industry and was even responsible for her cameo in the Robert Pattinson film Remember Me in 2010.

They later began dating and were together for seven years  before tying the knot in a four day celebration which began on September 10, 2011 at the Jamaica Inn in Ocho Rios, Jamaica.  The wedding ceremony is thought to have had 102 guests and it was over in 15 minutes before they took to the dance floor, eager to party.

Citing ‘irreconcilable differences’, Meghan and Trevor separated two years after their wedding and were divorced by August 2013. However, a source claimed that the separation was due to the soon-to-be royal’s new role on Suits.

‘Meghan landed her role in Suits just a few months before they married. And despite being together for six years before getting hitched, things started to fall apart not long after the wedding,’ the source revealed. Meghan’s wedding to Prince Harry which will take place at St George’s Chapel at Windsor Castle in England tomorrow in front of 600 guests. 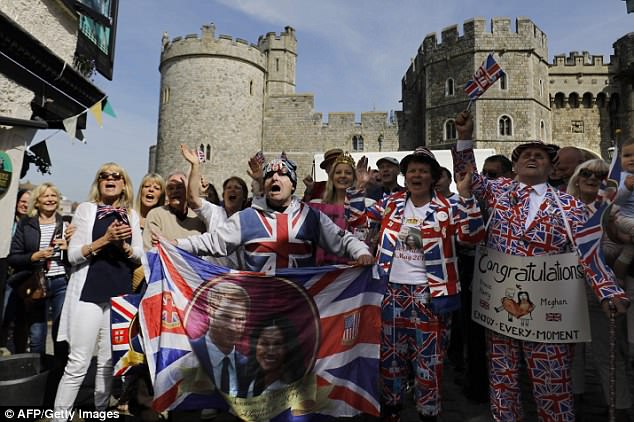 They continued: ‘They really battled with long distances. Trevor was based in LA while Meghan was in Toronto, a five-hour flight away. It was a very difficult way to start married life’.

Speaking to DailyMail.com earlier this year, half-brother Thomas Markle Jr blamed the break-up on ‘the pressure of Hollywood’.

A source told The Sun: ‘The split with Meghan hit Trevor pretty hard. He went through a rough time during the break-up and that was only made worse when Meghan got together with Harry.’

‘He had to re-live it all again — this time in public. It wasn’t the most amicable of divorces and there were hurt feelings on both sides. Now he has bounced back and things are looking great for him,’ the source added. 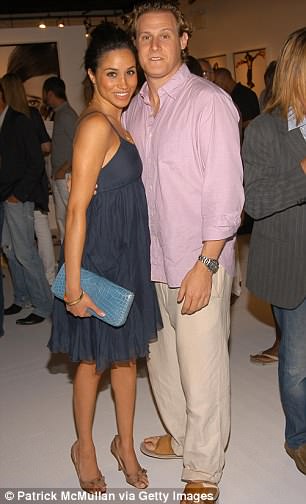 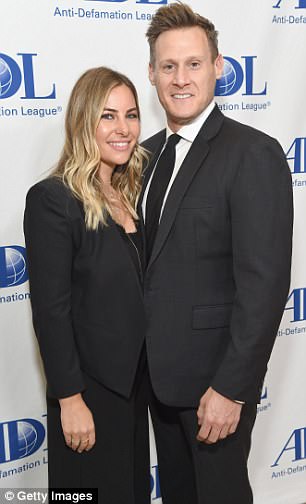 Trevor (pictured with Meghan in 2006, left) has since moved on and found love with health and nutrition expert, Tracey Kurland (pictured with him, right, at an ADL dinner at The Beverly Hilton Hotel on April 17, 2018)

When things fizzled out, he was introduced to his health and nutrition expert, Tracey Kurland through mutual friends, who he is still believed to be dating.

Trevor was also reportedly working on a fictional TV show, about a divorced woman who moves to London and marries a prince, until recently.

Meghan reportedly persuaded her ex to pull the plug on the ’embarrassing’ TV show, which he had been developing with Fox.

An unnamed TV executive told the Sun Online: ‘Trevor’s project is currently on hold after several months of anguish for Meghan.

‘She reached out to him at first through friends and now they have kept up the pressure and Trevor has pushed things back.’

The show, which remained untitled, it is said was inspired by a conversation he had with producer Dan Farrah, musing on what would have happened if he and Meghan had had children together.

While some parallels can be found, Trevor claims that the characters have nothing to do with his relationship with Meghan.

Meanwhile, preparations are underway for Meghan’s wedding to Prince Harry which will take place at St George’s Chapel at Windsor Castle in England tomorrow in front of 600 guests.

Harry’s father, Prince Charles, will walk his future daughter-in-law down the aisle after her own father, Thomas Markle, announced he wasn’t able to attend following a heart attack.

The schedule for the royal wedding 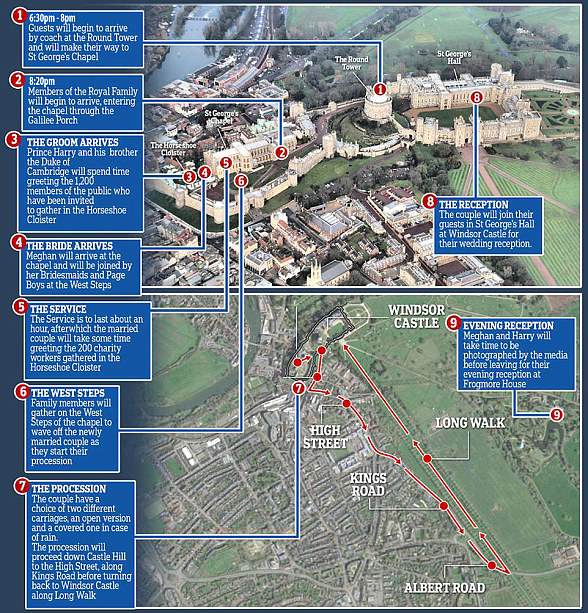 Members of the public who have been invited to watch the wedding day from the grounds of Windsor Castle begin to arrive.

Wedding guests begin arriving at the castle’s famous Round Tower by coach. They will enter St George’s Chapel through the South Door and take their seats. 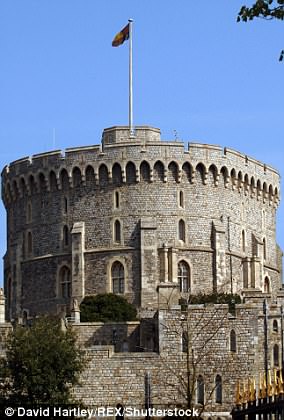 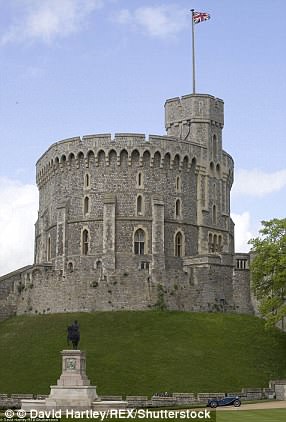 Guests will be arriving at the Round Tower at Windsor Castle by coach and will be seen walking to the South Door of St George’s Chapel from 9.30am. The tower was closed to visitors in 1975 for major construction work and was under-pinned to prevent subsidence, but instead of reopening to visitors, it was later converted into office space for the Royal Archives in 2011

Members of the Royal Family begin arriving, entering via the Galilee Porch, some on foot and others by car.

Harry and his brother the Duke of Cambridge are expected to appear at the Chapel’s West Steps, probably on foot, walking past the thousands of spectators invited into the grounds of the castle.

This will give Harry an opportunity to acknowledge the 200 representatives from charities he is associated with gathered in the Horseshoe Cloister at the bottom of the steps.

Following protocol, the Queen will be the last member of the Royal Family to arrive. 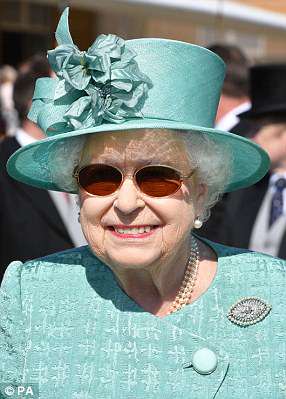 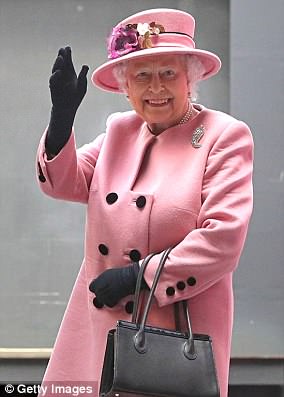 Following protocol, the Queen will be the last member of the Royal Family to arrive at around 11.55am. The service will start at noon and everyone will already know most of what to expect as the order of service is being released at midnight on Friday. Her Majesty is pictured left at garden party on Tuesday and right attending the first day of the Royal Windsor Horse Show

With a minute to go, Meghan Markle is expected to turn up at the Chapel’s West Steps by car, from her overnight accommodation, with some of her bridesmaids and pageboys.

She will start her journey, which will take her past some of the crowds in the Long Walk, with her mother Doria Ragland – but when the car stops at the castle her mother will exchange places with her bridesmaids and pageboys, including Princess Charlotte and Prince George. Ms Ragland will enter the chapel by the Galilee Porch.

The service starts. Everyone will already know most of what to expect as the order of service is being released at midnight on Friday.

The newlyweds will emerge about an hour later at the West Steps of the Chapel. They will be waved off on their carriage procession through Windsor by members of both families.

The congregation will file out of the chapel to see the newlyweds leave before heading to St George’s Hall for the lunchtime reception hosted by the Queen.

The carriage procession through the streets of Windsor is expected to take about 25 minutes.

The reception is not being televised and neither is the evening reception at Frogmore House, but viewers will get another glimpse of the royal couple when they leave Windsor Castle at 7pm for the evening do, which is hosted by the Prince of Wales. 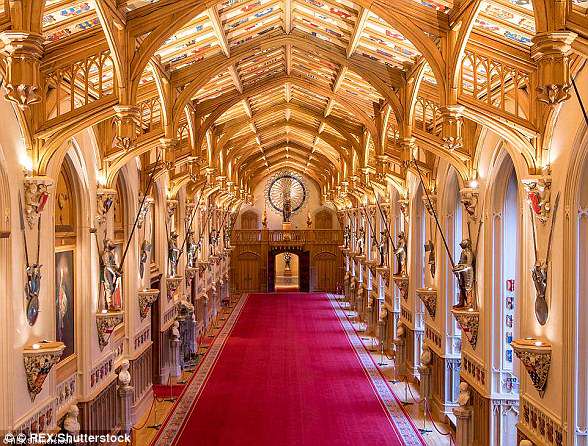 Bodyguard: Keeley Hawes and Richard Madden lark about behind scenes

'Lusty Crest' is Hilarious, Absurd, and Feels Like a Wild Live-Action Anime [SXSW]