Melania Trump is planning to visit several African countries in October, places which President Donald Trump referred to as ‘s***hole countries,’ in her first major solo trip since she became first lady.

She has made smaller trips on her own – to the U.S.- Mexican border to visit migrant children separated from their families in June and she went to Canada last September for the Invictus Games – but these were quick day trips.

She will travel without her husband, who referred to Haiti and African nations as ‘s***hole countries’ during a meeting with senators at the White House, it was revealed in January. 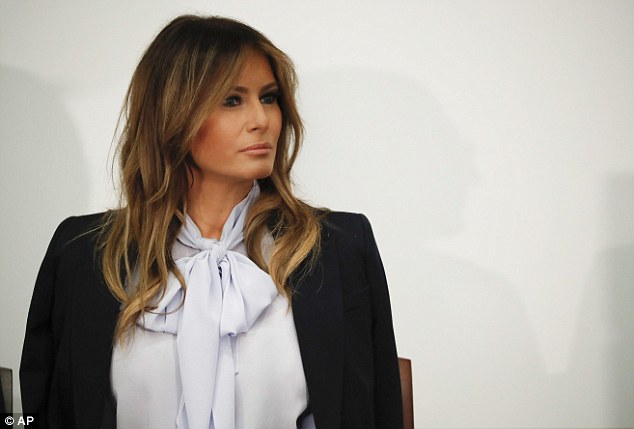 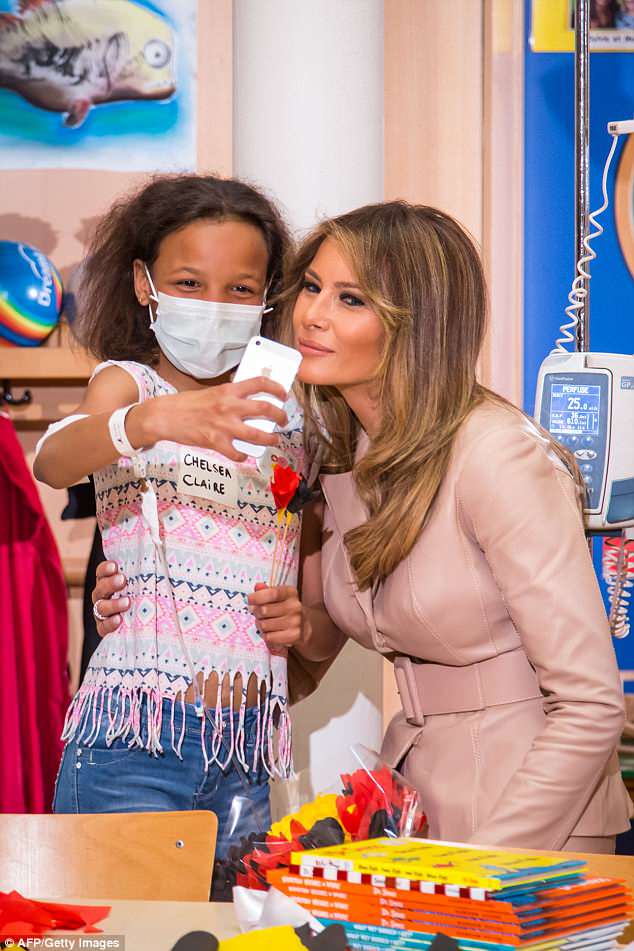 Melania Trump poses for a selfie as she visits the Queen Fabiola children’s hospital on May 25, 2017, in Brussels 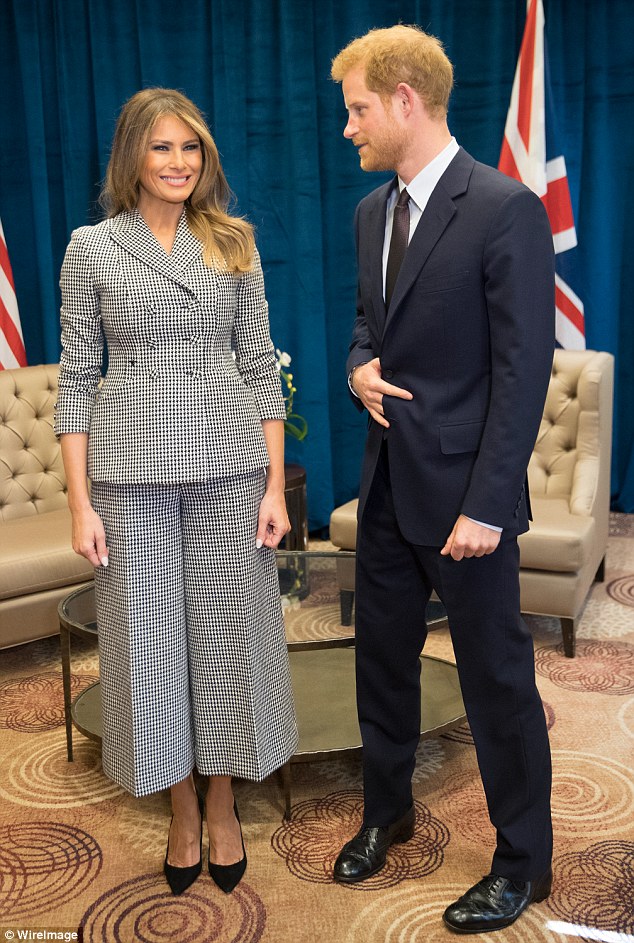 Melania Trump told The Associated Press in a written statement she’s looking forward to learning about the issues that children living on the continent face, as well as appreciating Africa’s history and culture.

Exact dates for the trip and which African countries she will visit have yet to be announced but she will head to the continent sometime in October.

‘This will be my first time traveling to Africa and I am excited to educate myself on the issues facing children throughout the continent, while also learning about its rich culture and history,’ the first lady said in the statement. ‘We are a global society and I believe it is through open dialogue and the exchanging of ideas that we have a real opportunity to learn from one another.’

Melania Trump has made a focus on children her signature platform as first lady through her work on her Be Best campaign.

Stephanie Grisham, the first lady’s communications director, said African was chosen as a destination after Melania Trump learned about some of the development programs that are underway in many of its countries.

The first lady has accompanied President Trump on several of his international trips, including stops in Saudi Arabia, Israel, Turkey, Brussels, France, Japan, South Korea, the United Kingdom and Finland.

On several of those visits she interacted with children, usually through hospital visits or stops at local schools.

Last November, in Japan, she and First Lady Akie Abe visited a local school where they learned to write in calligraphy. She also met with school children at the Beijing Zoo in China and took a private tour of the Great Wall.

When she was in Brussels last May for the NATO meeting, she stopped by the Queen Fabiolo Children’s Hospital, where she spent time doing arts and crafts, posing for selfies, and giving lots of hugs. She also brought gifts for the children, including Dr. Seuss books and souvenirs from the White House.

In Italy, the first lady charmed children she visited at the Bambino Gesu hospital in Rome when she spoke to them in Italian. She also visited the Necker-Enfants Malades Hospital in Paris. 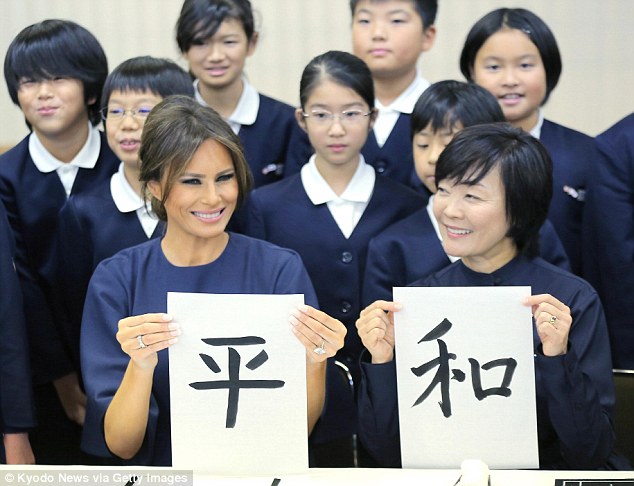 Melania Trump and Akie Abe, wife of Japanese Prime Minister Shinzo Abe, hold up their calligraphy of the Japanese characters for ‘heiwa,’ meaning peace, during their visit to an elementary school in Tokyo last November Melania Trump speaks with children as she visits Necker Hospital for children on July 13, 2017 in Paris 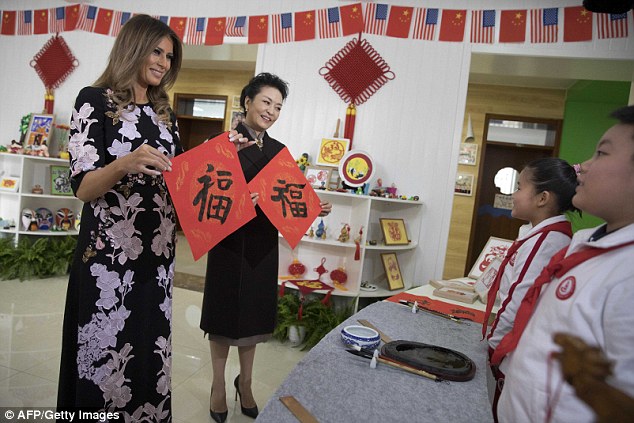 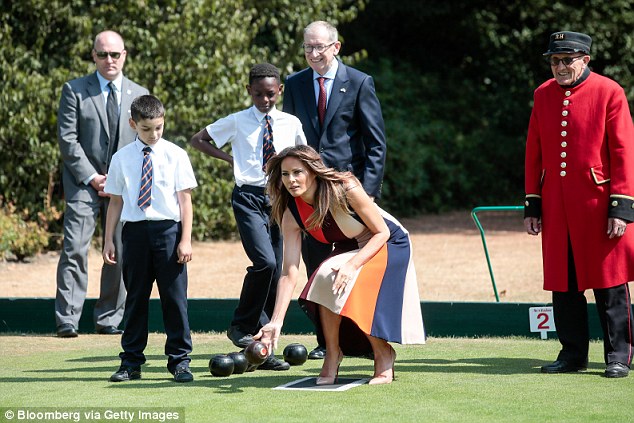 Melania Trump tries her hand at lawn bowls as Philip May, husband of U.K. Prime Minister Theresa May, watches during a visit to The Royal Hospital Chelsea in London in July

And she visited Hadassah Medical Organization, a leading Israeli hospital that is also known as a center of coexistence between Arabs and Jews, when she joined the president in the Middle East last May.

She did not join President Trump on two of his trips after her kidney surgery in May, citing health reasons. She missed the G7 summit in La Malbaie, Canada nor his Singapore summit with North Korean leader Kim Jong Un.

In January, while meeting with lawmakers in the Oval Office to discuss immigration, the president grew frustrated with talk of protecting immigrants from Haiti, El Salvador and African countries as part of a bipartisan immigration deal.

‘Why are we having all these people from shithole countries come here?’ Trump said, people in the meeting told The Washington Post.

Who is Sabrina Stocker? The Apprentice 2018 candidate and event coordinator at David Lloyd

Dakota Johnson's New Suspiria Trailer Will Give You Nightmares