As Joe Biden was negotiating a nuclear submarine partnership with Scott Morrison and preparing for a Quad meeting at the White House last week, the US was secretly working on another deal.

The US President had spoken to China’s leader Xi Jinping by phone two weeks earlier. China had made it clear that the price of co-operation on big issues such as climate change was some concessions on key disputes that had plagued the relationship for the past four years. 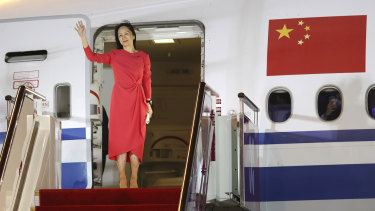 Meng Wanzhou waves as she steps out of an airplane in Shenzhen.Credit:

High on the list was Meng Wanzhou, the chief financial officer of Huawei and the daughter of its founder Ren Zhengfei. The corporate princess had been under house arrest in Canada for almost three years on US fraud charges related to alleged Iran sanction violations.

For three years the stalemate endured until Chinese Foreign Minister Wang Yi used rhetoric that would be familiar to Australian diplomats. It was up to the US to make the first move. “America should meet China halfway,” he said.

After weeks of intense discussions over deferred prosecution and extradition agreements with the US Department of Justice, Meng returned to China on Saturday night, the two Michaels landed in Canada the same day. In Shenzhen they put out the red carpet, lit up a 550 metre tall skyscraper in “welcome home Meng Wanzhou,” and rolled wall-to-wall coverage of her thanking the Chinese Communist Party for its leadership. They did not mention that Kovrig and Spavor had been exchanged for her release.

“This is a very significant move and symbolises a new beginning for China and the US,” Henry Wang Huiyao, the president of the Centre for China & Globalisation policy research group told Bloomberg. “Next there could certainly be co-operation on climate change.”

The US, acting more like the diplomatic superpower that it is, had navigated both sides. It had simultaneously negotiated a submarine deal worth $90 billion with Australia (targeted at China), hosted the first Quad leaders meetings at the White House (again targeted at China) and signed off on the biggest symbolic move it could muster to start to repair the relationship with China – dropping the case against Meng.

In the great geopolitical game now under way Meng’s release is a sideshow, but it is also a mechanism by which the US can navigate Beijing’s style of diplomacy – heavy on rhetoric, sacrifices and symbolism. The US, acting more like the diplomatic superpower that it is, played both sides.

Stronger dialogue between the two superpowers – even if it is on strained terms – should be welcomed but Australia should also be wary of being left out of the conversation.

For now, those hoping for a similar rapprochement for Australian citizens who remain in Chinese jails on spurious national security charges, such as Yang Hengjun and Cheng Lei, will be disappointed. The US had something Australia does not – leverage.

After two years of diplomatic tension, no contact between ministers and growing animosity in Canberra and Beijing, Australia has fired almost every shot it has in the name of democratic principles.

China has repeatedly asked for a concession from Australia to get the relationship back on track but Australia has none to give. It won’t backtrack on its national security positions, human rights concerns or investment restrictions.

That leaves Australia in a principled but difficult position. And in China’s game of hostage diplomacy, some of its citizens behind bars.