Argentine scores brace, including his 600th goal for the club, as Spanish giants beat Liverpool in first-leg semi-final. 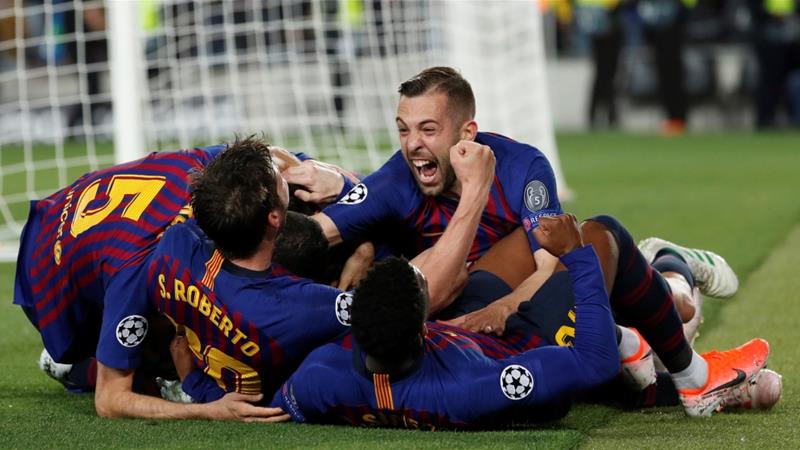 Lionel Messi scored a brace as Barcelona beat Liverpool 3-0 in the first-leg semi-final to edge closer to the Champions League final.

Messi scored his 599th and 600th goals for Barcelona to subdue a Liverpool lineup that had outplayed the hosts for long stretches at Camp Nou on Wednesday but finally succumbed to the Argentine’s mastery.

His double and Luis Suarez’ early goal against his former club gave Barcelona a commanding win.

Messi has won the Champions League four times but his hunger to restore Barcelona as the best club team on the continent was evident against Liverpool, when he had to almost singlehandedly quash a ferocious comeback attempt by the visitors after Suarez’ 26th-minute opener.

Messi doubled the lead from a rebound with 15 minutes left and followed that up by curling in a perfectly struck free kick in the 82nd.

Mohamed Salah nearly scored a valuable away goal for Liverpool to take back to next week’s return leg at Anfield when he hit the post late.

“It is not over because we are going to a ground that is very difficult, with lots of history, that presses rivals, but we are happy with today’s game,” said Messi.

“This is the critical moment, the best moment, and we have to be more united than ever. At the start of the year we said we would do this together.”

Messi’s double also took his overall tally for the season to 48 goals and his Champions League-leading tally to 12 this campaign.

“We know what Messi can do but he does not stop surprising us,” said Barcelona coach Ernesto Valverde. “He has made the difference again and pushed us to victory.”

It was a bitter loss for Jurgen Klopp’s Liverpool, which is trying to reach consecutive European finals after losing last year’s decider to Real Madrid.

Klopp praised his side’s performance but he was not optimistic about the likelihood of a miraculous turnaround.

“I was completely happy with how we played, we played between the lines, we had chances and caused them a lot of problems,” the German told a news conference.

“If you lose away it’s not a massive problem as long as you scored a goal but we didn’t score that goal and that makes things a lot harder. We have a chance because it’s football but we had a much bigger chance before tonight.”

Earlier, Liverpool launched an investigation into an incident in the Spanish city of Barcelona where some of the Reds supporters were filmed racially abusing an Asian man who was pushed into a fountain by one of them.

In the video, which circulated widely on social media, a Liverpool supporter could be seen shoving the man into the water at the Placa Reial ahead of the semi-final.

A second man, also believed to be a Liverpool fan, could then be heard saying “Mr Miyagi, san” when the elderly man tried to speak to the person who pushed him.

Mr Miyagi is a racial reference to the fictional karate master in the Karate Kid films from the 1980s.

Another video also showed a street seller being thrown into the water.

Liverpool FC said it will investigate the incidents and were seeking to identify those involved.

Cannes Film Review: ‘The World Is Yours’