The Met Office has issued four yellow weather warnings for ice across northern Britain for tonight and tomorrow morning as a 1,200-mile ‘tongue of ice’ blows in from Canada.

A yellow weather warning for up to an inch of snow has also been issued for northern Scotland as forecasters warned that a light dusting could fall on north-west England, Exmoor, Dartmoor and the Welsh hills overnight.

An army of 750 gritters are expected to take to the roads tonight to keep highways clear ahead of the chaotic Monday morning rush hour, as Britain’s working week gets off to a chilly start.

It comes after patches of rain and cloud cover led to a cold Sunday across Britain. Brave swimmers were seen taking to the English Channel’s icy waters off Avon beach, Dorset, today as they braved the 10C temperatures. 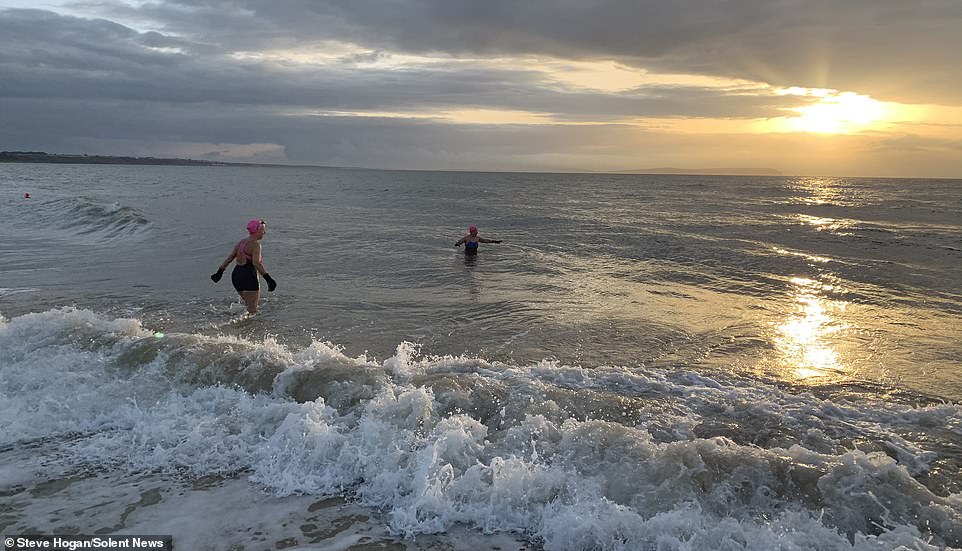 The Met office has issued four yellow weather warnings for ice across northern Britain this evening. It has also issued a yellow warning for snow in Scotland 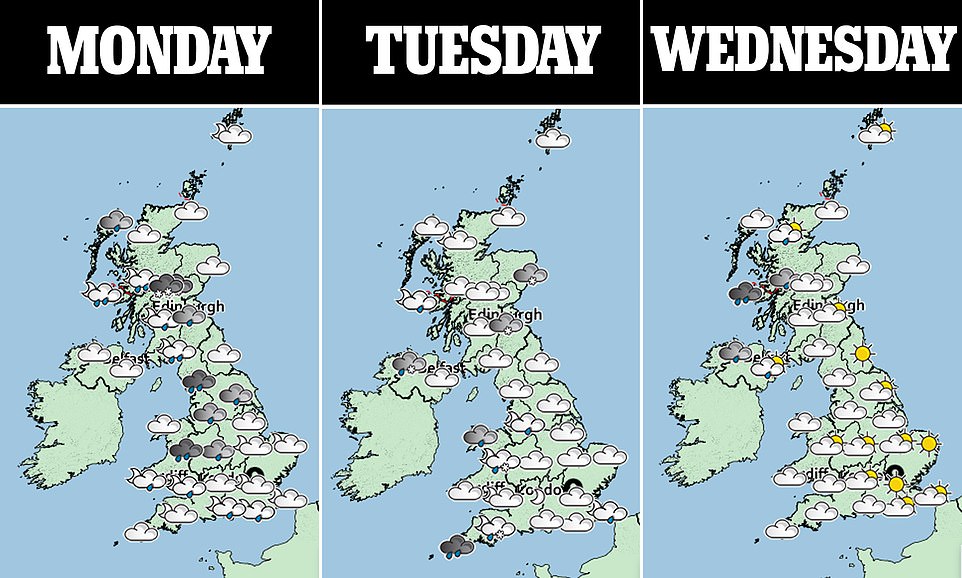 Plunging temperatures tonight are expected to cause ice to form across northern Britain tonight, with snow also expected in northern Scotland. Snow has also been forecast for Britain’s west coast, Northern Ireland and Scotland on Tuesday 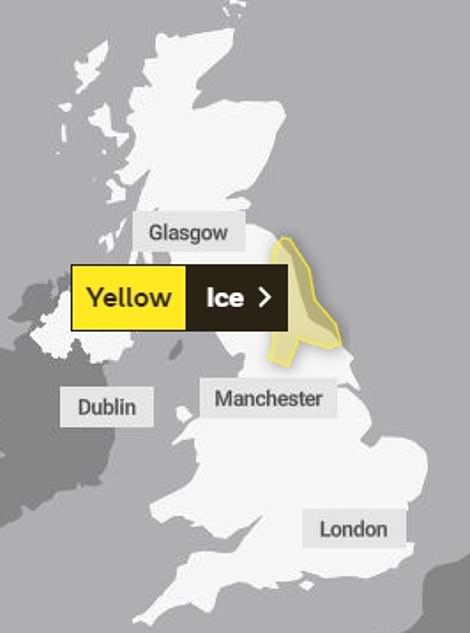 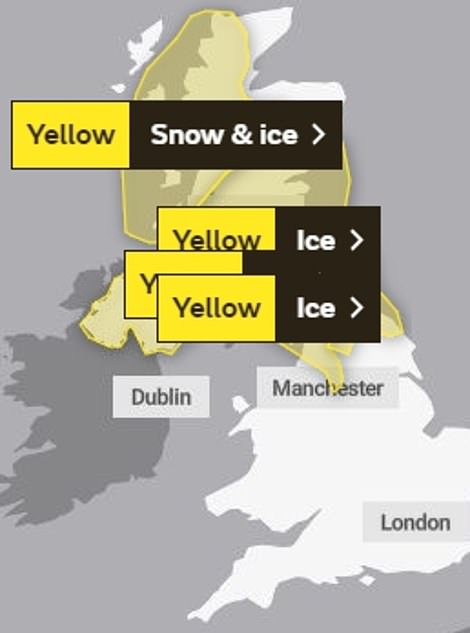 The yellow weather warning for snow and ice in northern Scotland is in place for 24 hours from midnight tonight.

Temperatures are expected to drop to -7C in Scotland tonight, Met Office forecaster Simon Partridge said, and plummet to 0C across the north of England and Northern Ireland.

‘Cold air coming from off Canada brings potential for the most widespread snow this winter on Monday’, he said. ‘Northern England may well see low-level snow for the first time, most likely in the North-West.’

‘A dusting could also be seen on Exmoor, Dartmoor and Welsh hills, and possibly the Peak District. The Pennines and Scotland will certainly see snow. 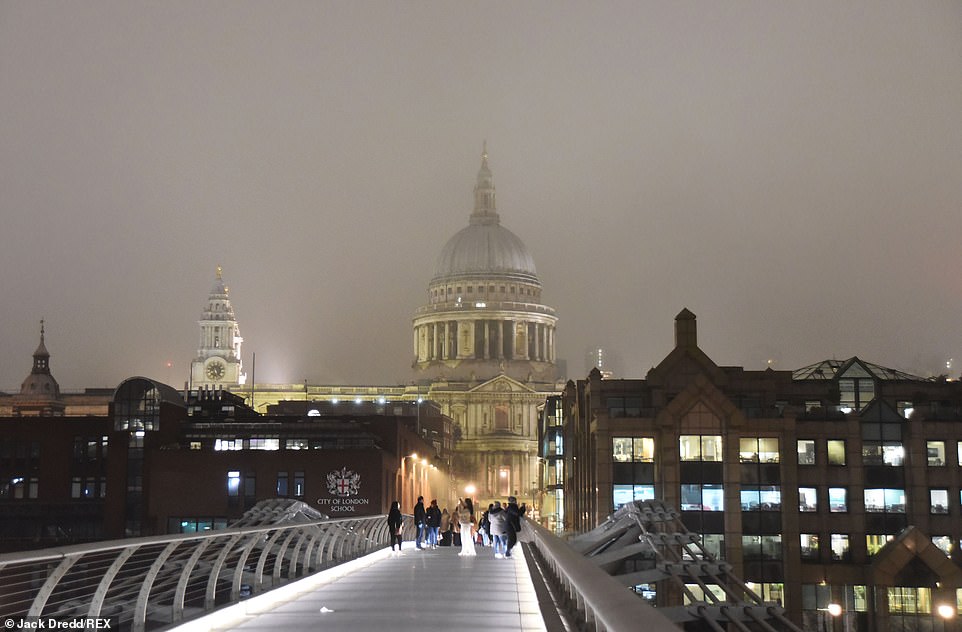 The expected icy conditions come after a cold weekend that saw much of Britain under clouds and patches of rain in places. Pictured above is St Paul’s Cathedral in London on Saturday night 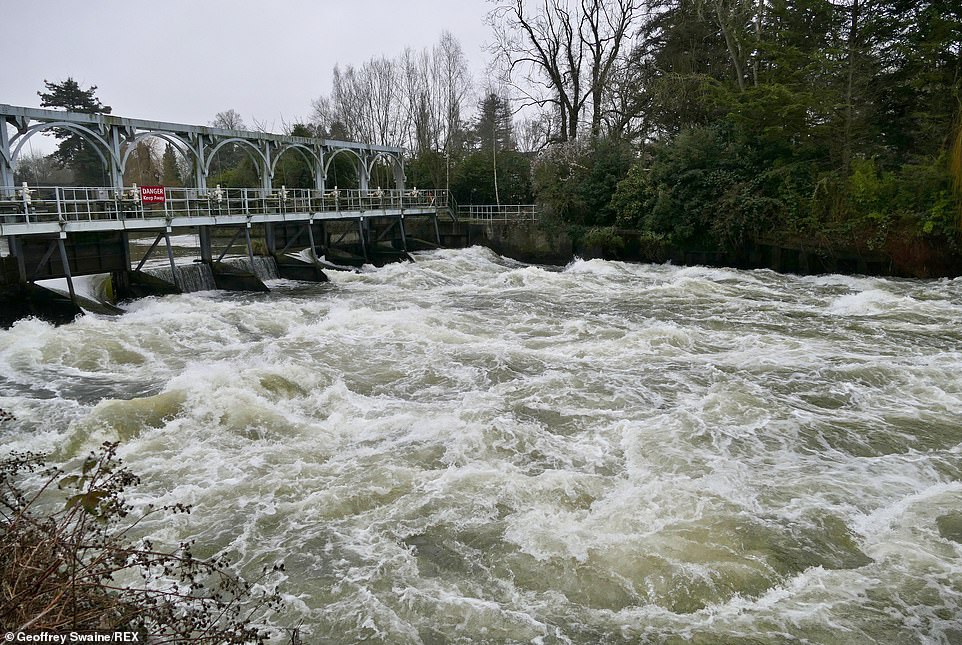 Rainfall earlier this week has caused water levels in rivers to rise. Above the Thames Salmon run is pictured, with a torrent of water gushing through 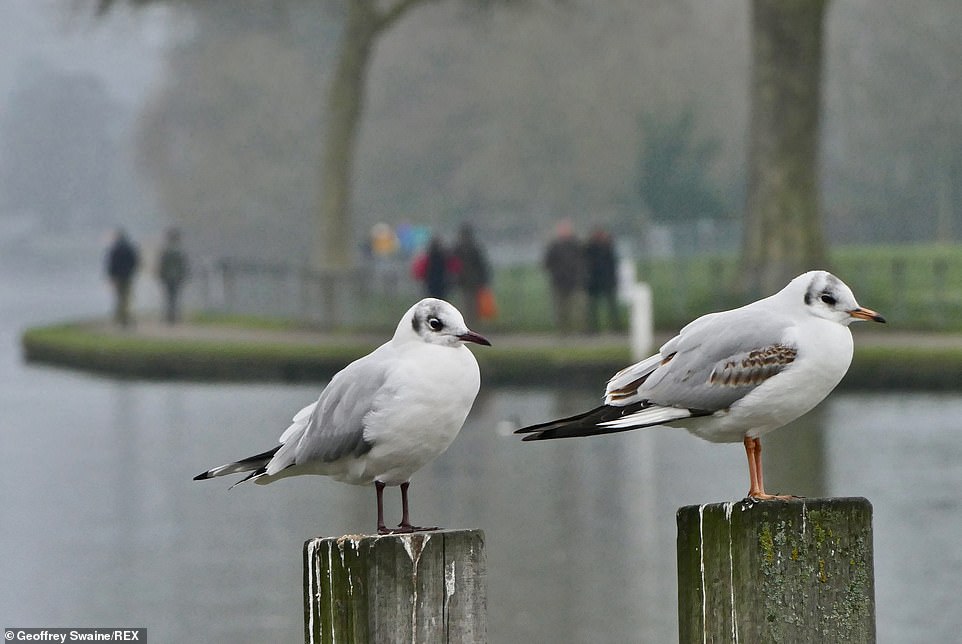 Two seagulls are seen resting on wooden posts in overcast weather by the River Thames in Henley, Oxfordshire, on Saturday 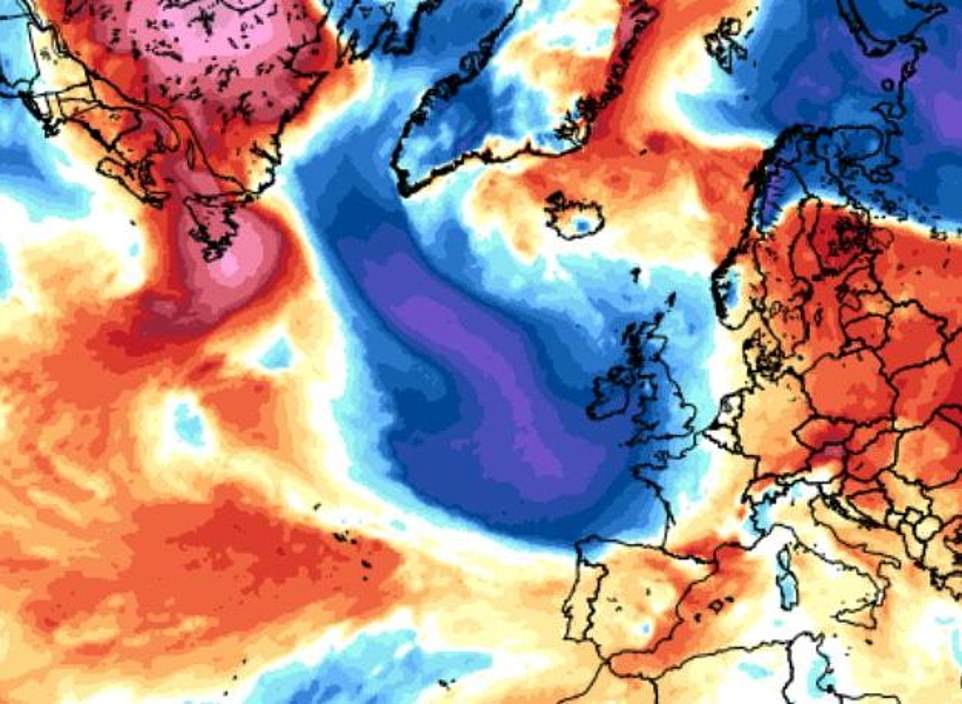 The cold conditions are expected to be brought by a 1,200-mile Canadian ‘tongue of ice’ that is approaching Britain 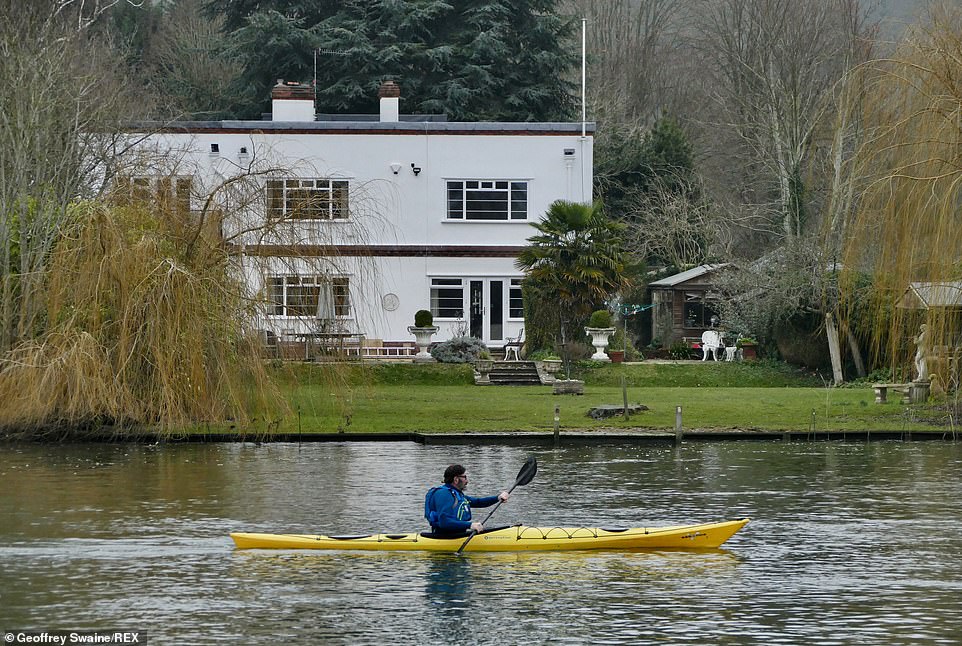 A canoeist heads out onto the river Thames in Henley, Oxford, during yesterday’s misty weather

‘Monday morning looks like -7C in Scotland, and Monday night could beat the -10.3C coldest night this winter as temperatures fall over lying snow in Scotland.

’50-60 mph gales follow on Tuesday in the South-West as it turns milder, with 50mph gusts on Friday and Saturday as rain pushes across all of the country.’

The warnings said Britain should expect some injuries from slips and falls on icy surfaces, as well as patches of ice forming on some untreated roads, pavements and cycle paths.

On Monday they forecast ‘turbulent’ weather with sleet and snow in some areas, and further wintry conditions on Tuesday.

Spells of rain, strong winds and gales are also expected across parts of the UK next week. 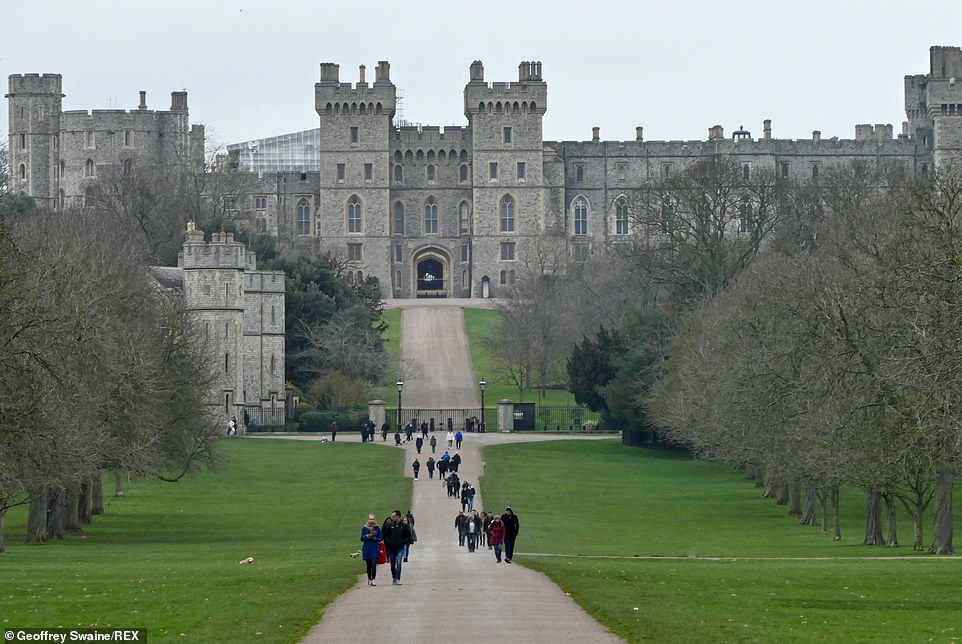 Tourists pictured enjoying the one-mile walk at Windsor Castle, Windsor, today. The sky remained overcast for most of the day 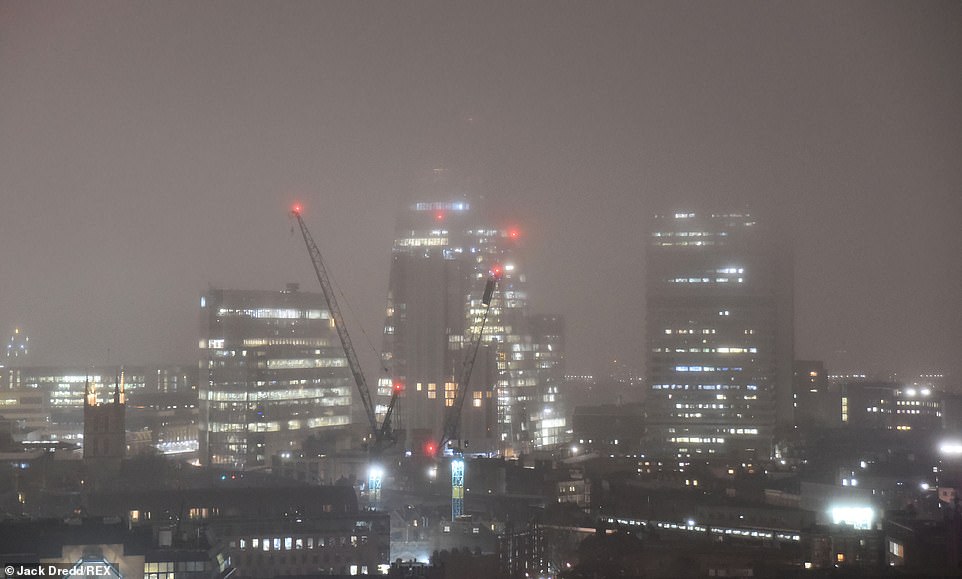 Mist covers the London skyline on Saturday night and blocks the view of the top of the Shard, Southwark