Mexico was gripped by protest on International Women’s Day as thousands of female demonstrators took to the streets and denounced a president who has refused to drop a candidate accused of rape.

‘Together we are the fire, burn everything,’ said one banner in the crowd, some of whom angrily kicked at a fence during protests that left 62 police and 19 civilians injured.

Authorities estimated there would be almost 100 women’s marches in cities and towns throughout Mexico, while  some local and state authorities designated squads of female officers to provide security at the marches.

Mexican leader Andres Manuel Lopez Obrador sought to deflect criticism by boasting about the number of women in his cabinet, but during the same press conference he referred to one reporter as ‘sweetheart’.

The president is also under fire for refusing to break with his party’s candidate for governor of the state of Guerrero, Felix Salgado, who has been accused of rape by two women although not charged.

Lopez Obrador says the issue should be left up to voters and accused right-wing opponents of playing politics with the claims, which Salgado denies. 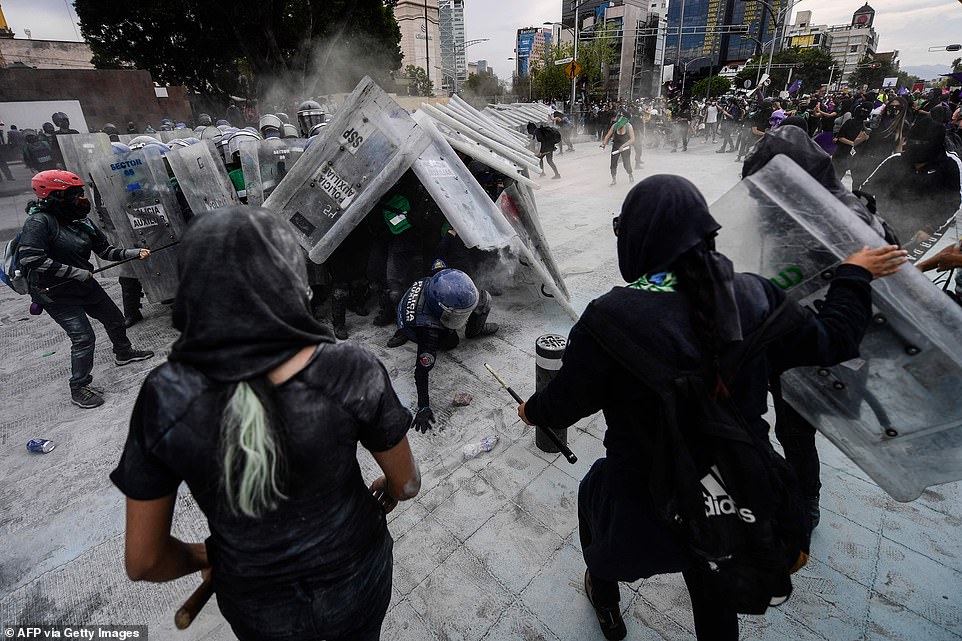 Battle in the streets: A posse of riot police brandish their shields as they face off with demonstrators during an International Women’s Day march in Mexico City which ended with dozens of people injured 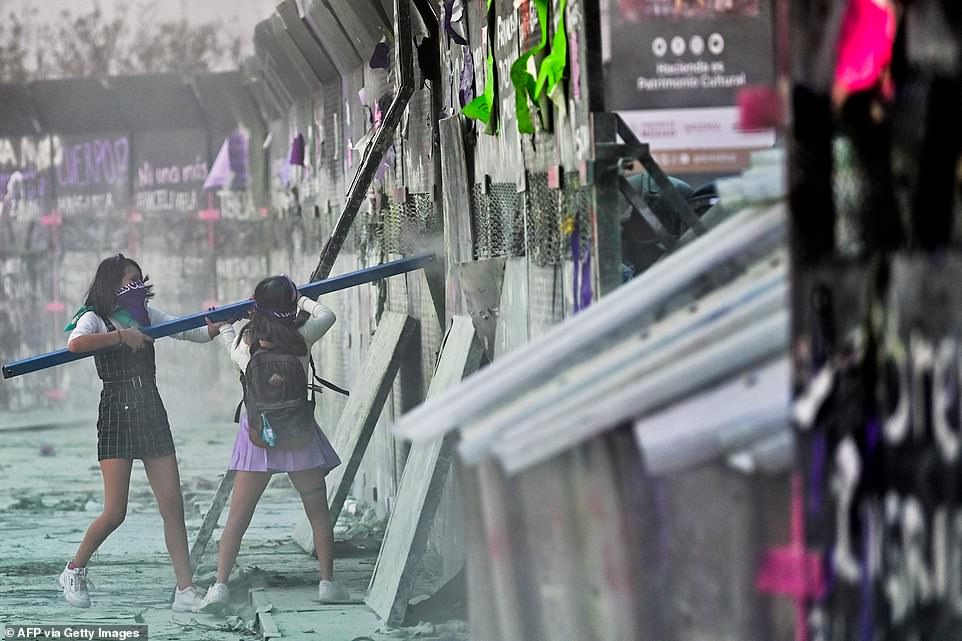 Two women clash with police officers on the other side of a fence in front of Mexico’s National Palace, after barricades were covered in posters, flowers and the names of female murder victims 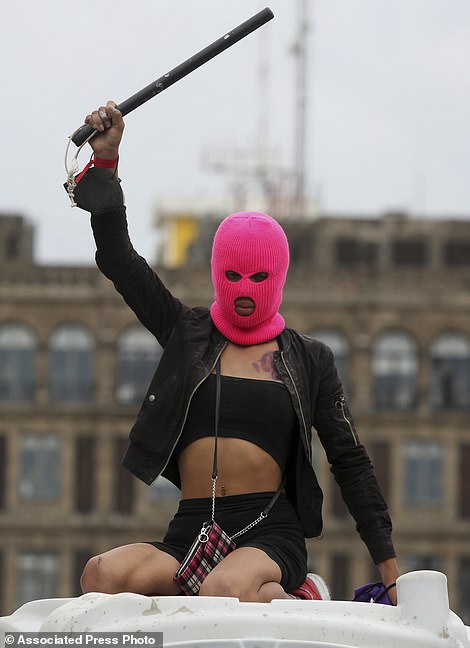 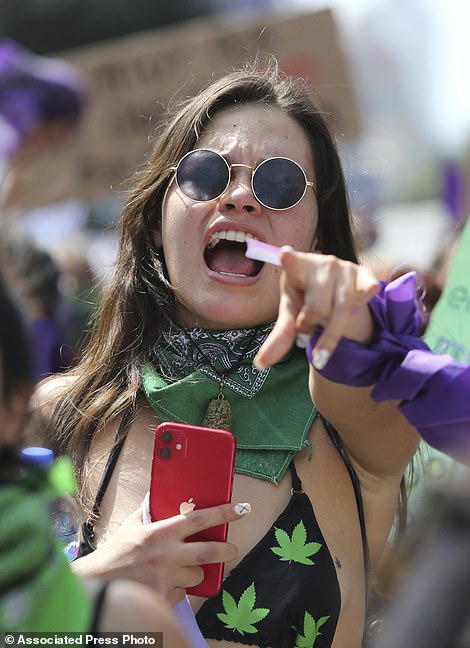 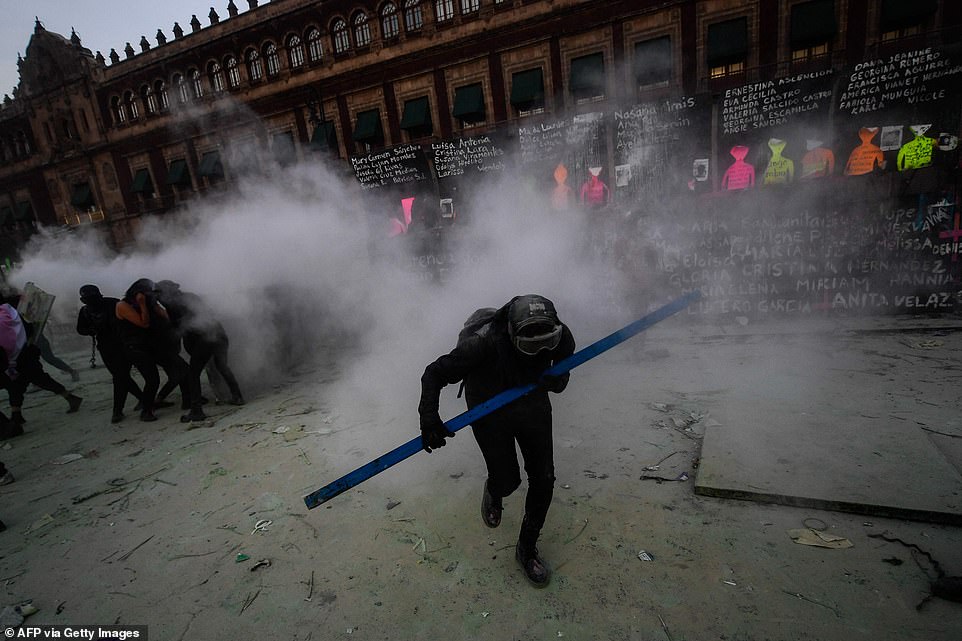 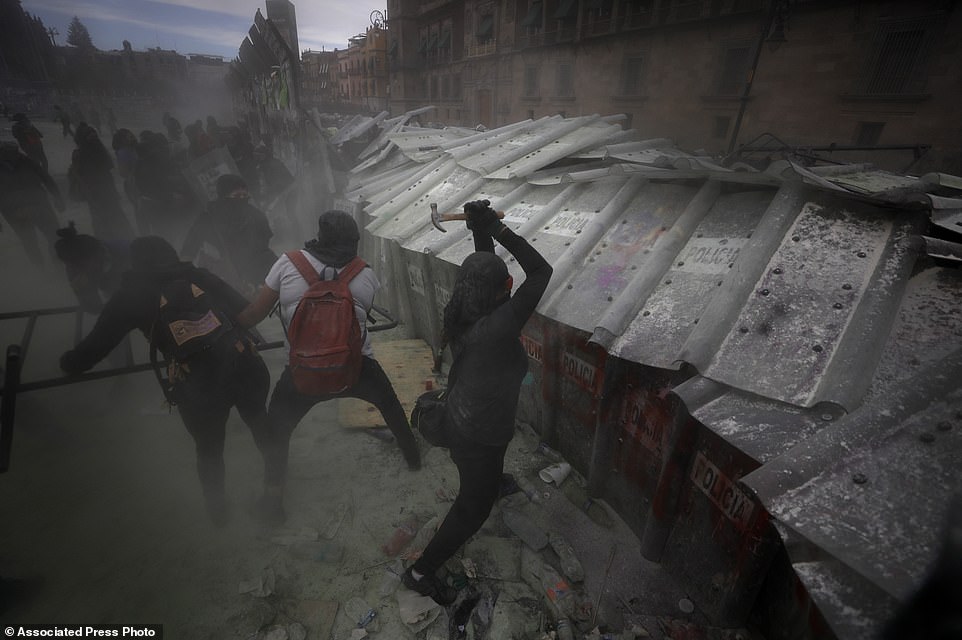 Demonstrators attack a barricade with a hammer after barriers were put up in Mexico City’s central plaza, ostensibly to protect historic monuments from being defaced 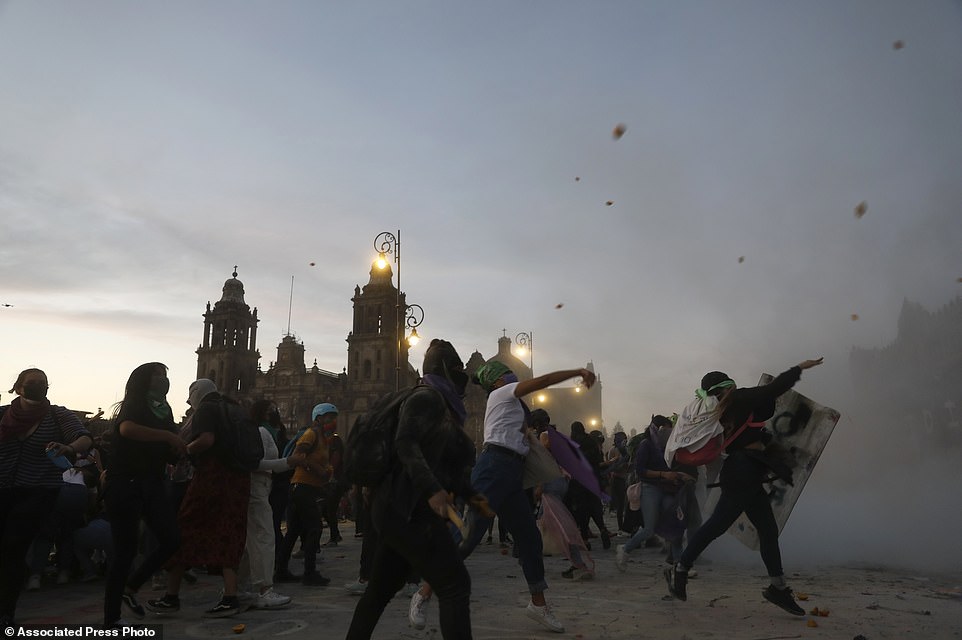 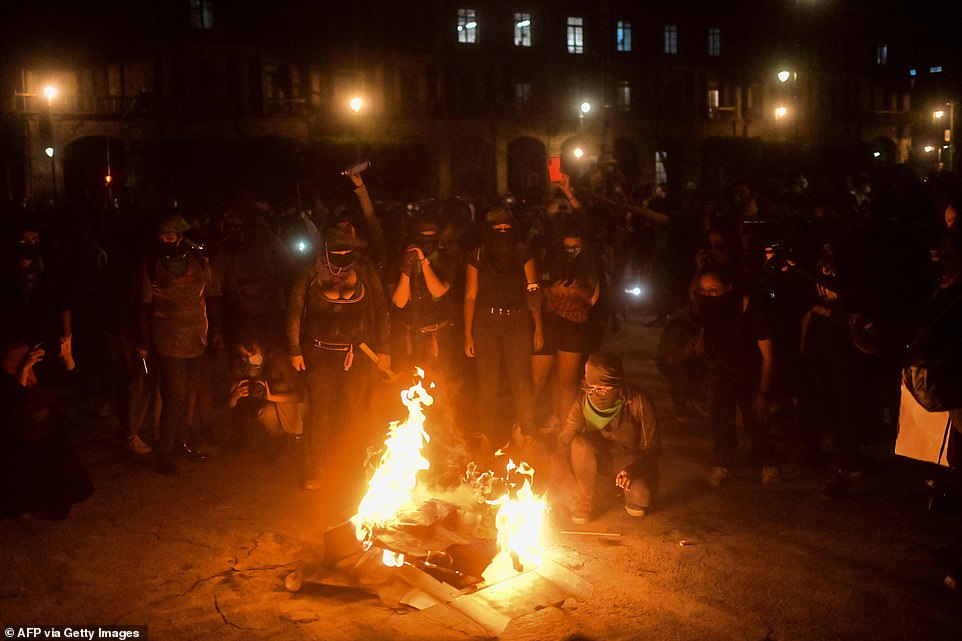 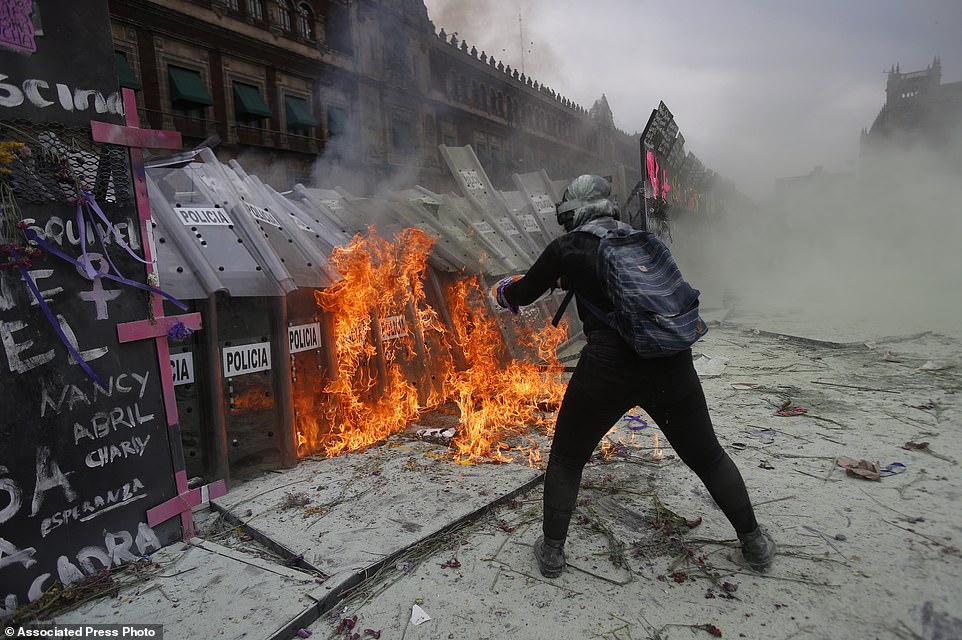 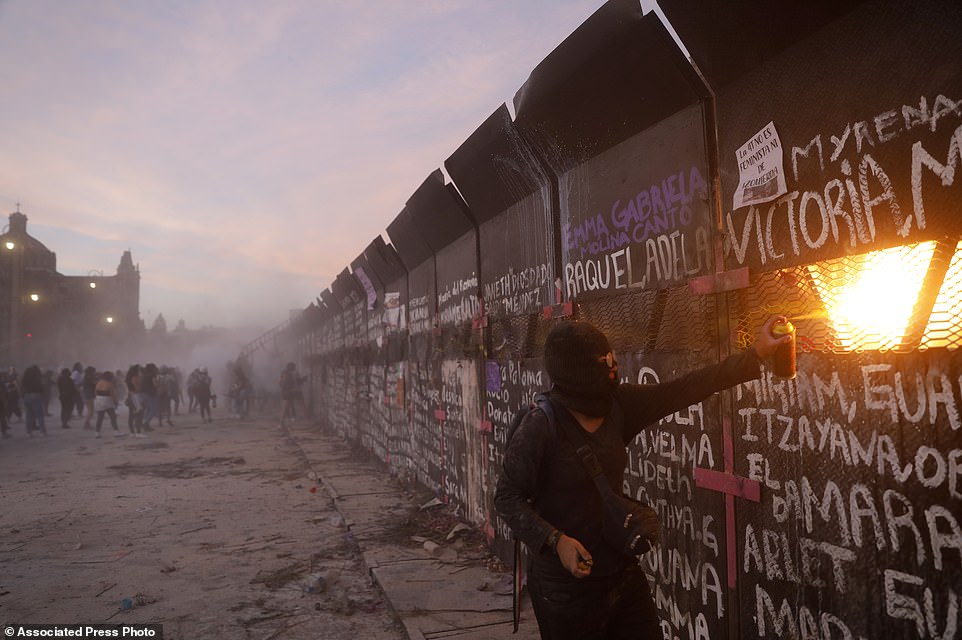 A leftist who touts his long record of social struggle and says ‘the poor come first,’ the president is also a social conservative who leaves abortion largely to state legislation and says the family is the centre of society.

‘He should start really fighting, but for the women of Mexico,’ said marcher Ana De la Toba, a 39-year old Mexico City lawyer.

Ahead of the Mexico City protests, the government had put up steel barricades in front of the National Palace where Lopez Obrador lives and works.

The president said the barriers were meant to protect buildings and monuments that had been painted with graffiti in previous feminist demonstrations, drawing further ire from protesters.

‘Why do they want clean monuments, in a country awash in blood?’ the marchers chanted.

Lopez Obrador also accused his conservative opponents of ‘disguising’ themselves as feminists and ‘infiltrating all the movements to create provocations’.

The president said two women had been found with gasoline bombs at a workshop in an upscale Mexico City neighborhood, saying, ‘I am sure… they were put up to this.’

Some marchers smashed windows at a city-centre hotel while others damaged centuries-old tilingon a landmark building with hammers.

Other protesters battled police in the main square with rocks, bottles, metal poles, spray paint and streams of flame from lit aerosol cans.

Sixty-two officers and 19 civilians were injured during the incidents, said Marcela Figueroa, an official of the city’s police agency. 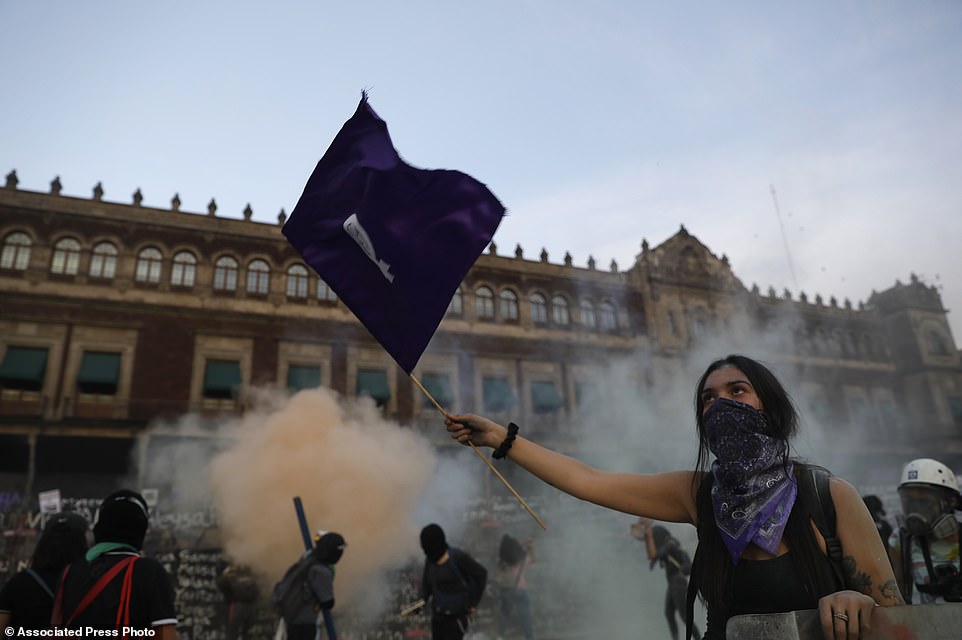 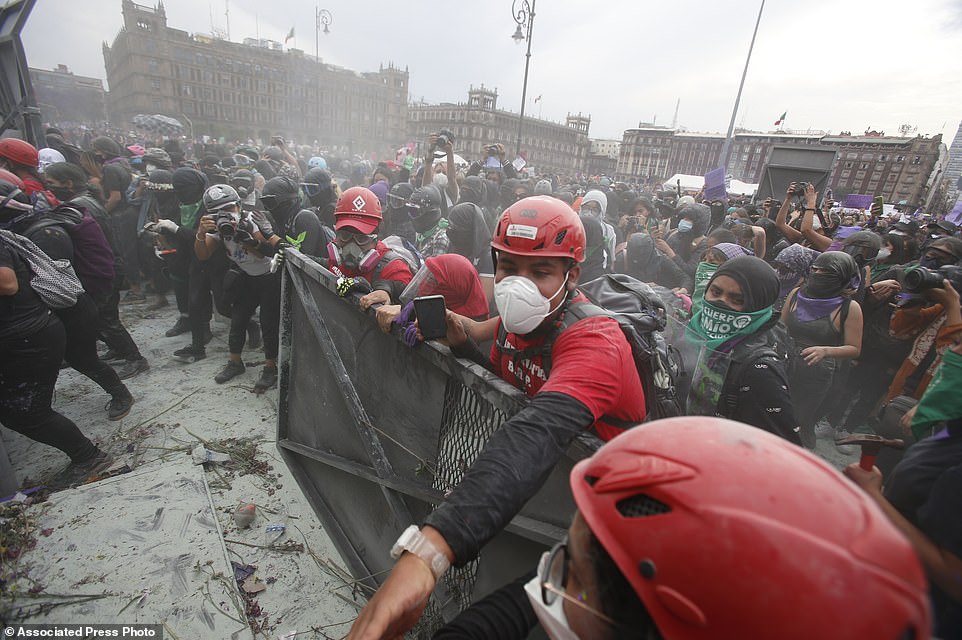 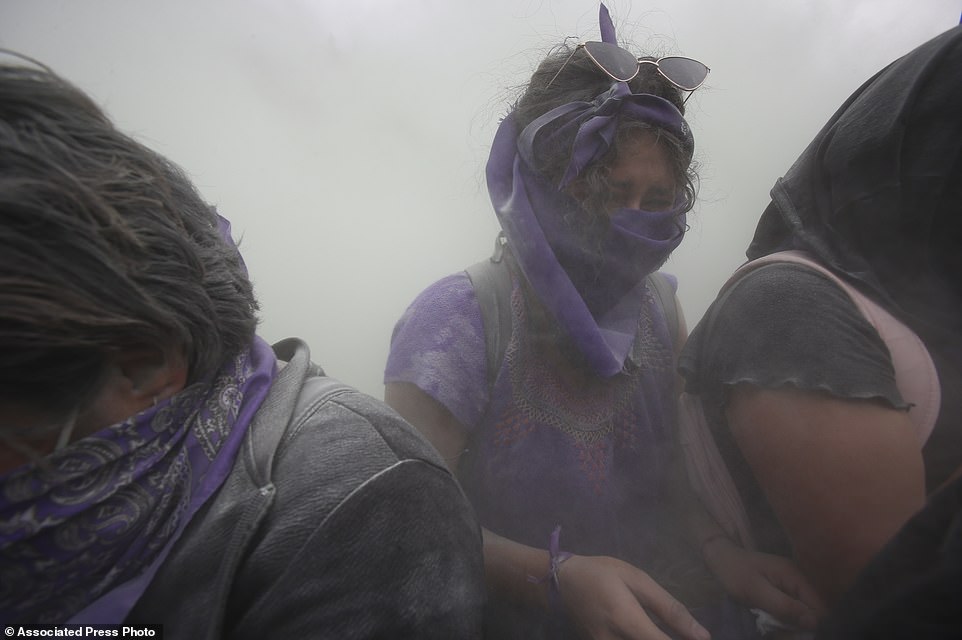 Thousands of women also marched in Buenos Aires, Argentina, which has seen a wave of femicide that has claimed on average one life per day so far this year.

‘We want to be free, alive and without fear,’ said posters carried by the demonstrators.

Clashes broke out in Chile, as police used water cannon and tear gas to disperse thousands of protesters who painted the slogan ‘They are killing us’ on an esplanade in central Santiago.

Elsewhere, than 100 activists wearing purple gathered outside a prosecutor’s office in Honduras to demand justice for nurse Keyla Martinez, 26, who died in police custody last month.

‘Here, the life of the woman is worth nothing,’ said Maria Julia Avila, 49. Honduras’ human rights watchdog says 4,769 women were murdered in the country between 2010 and 2020.

In Europe, several thousand demonstrators massed in Barcelona for a socially distanced march, wearing purple masks and carrying posters with slogans such as: ‘No means no’ and ‘The real pandemic is machismo.’

Madrid banned gatherings over the virus, but a few dozen women gathered nevertheless.

In Hungary, where it is traditional to buy flowers for women on this day, flower shops were granted an exemption from a fresh two-week coronavirus lockdown.

And in France, where one woman is killed every three days by their partner or ex-partner, according to 2019 government figures, tens of thousands marched in major cities to call for stronger police action against femicide. 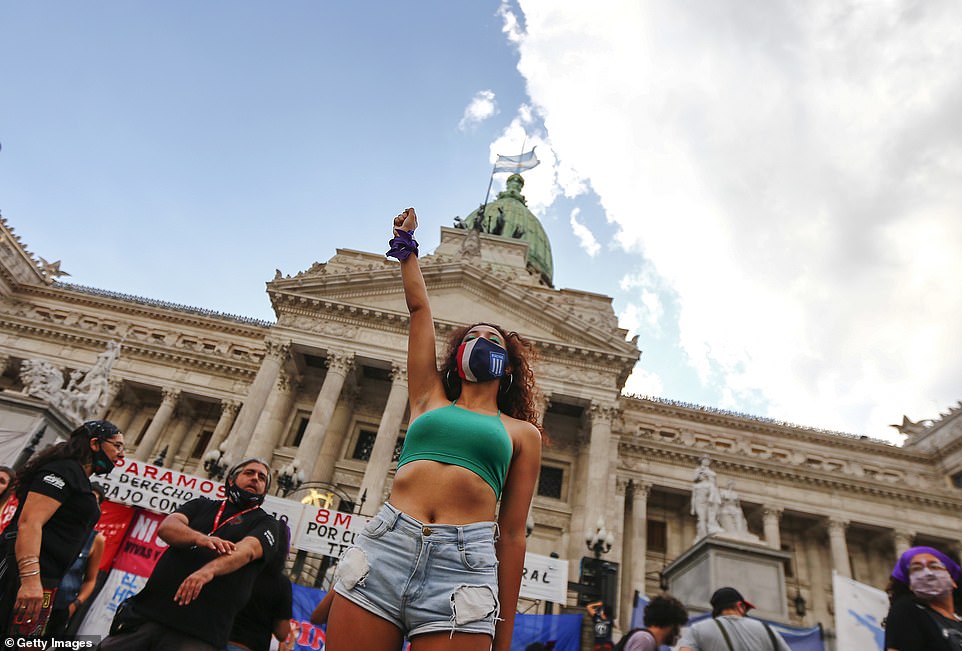 BUENOS AIRES, ARGENTINA: A woman raises her fist during a demonstration outside the Congress where protesters denounced violence against women and transgender people 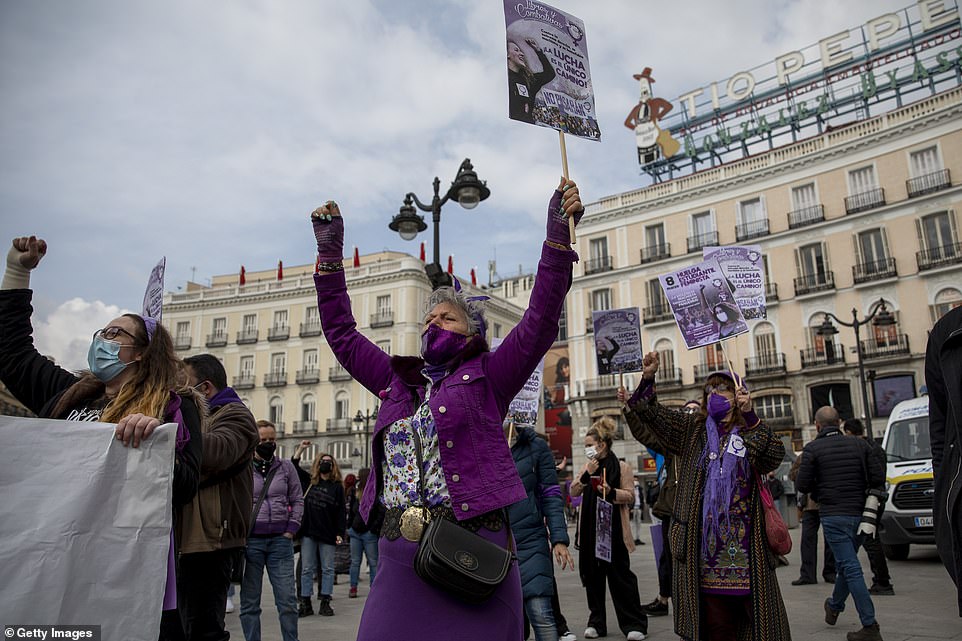 MADRID, SPAIN: Some female activists turned out at the Puerta del Sol despite official efforts to restrict demonstrations because of the coronavirus pandemic 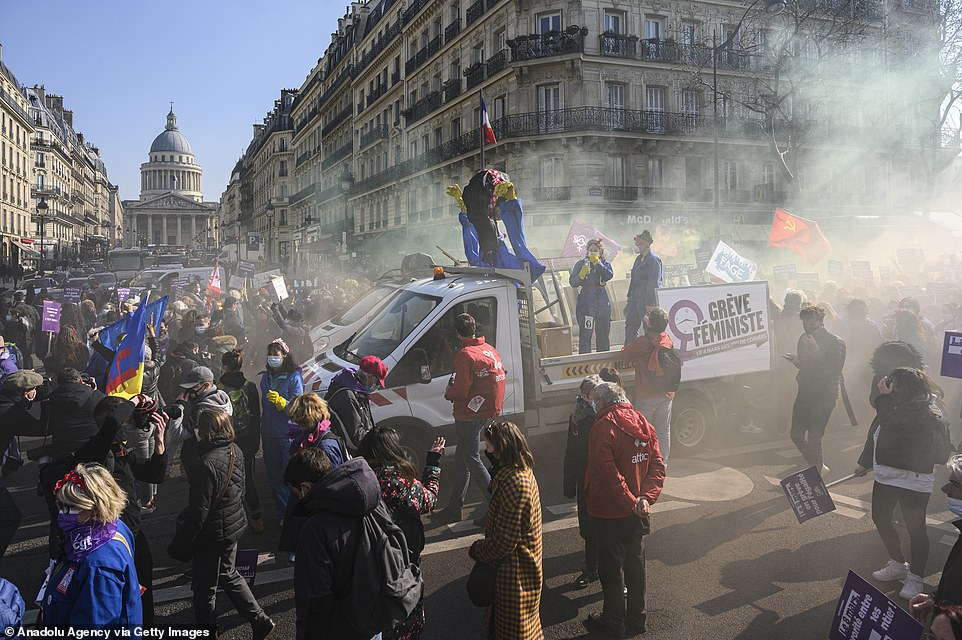 PARIS, FRANCE: A sign on the back of a truck declares a ‘feminist strike’ as people gather in the French capital  on International Women’s Day 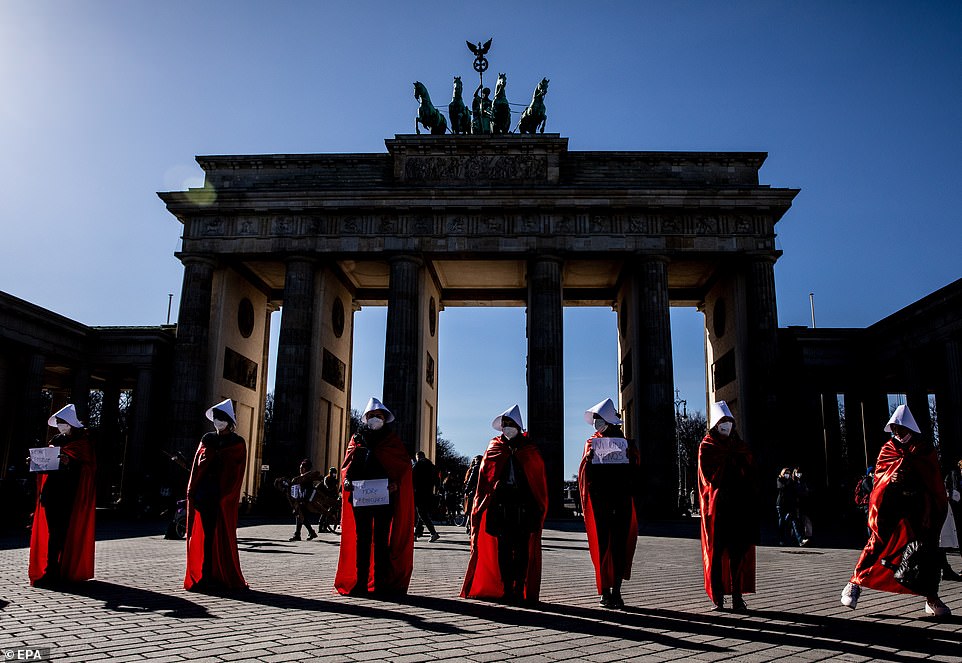 BERLIN, GERMANY: Women’s rights activists stand under the storied Brandenburg Gate as they hold a protest organised by the Alliance of International Feminists 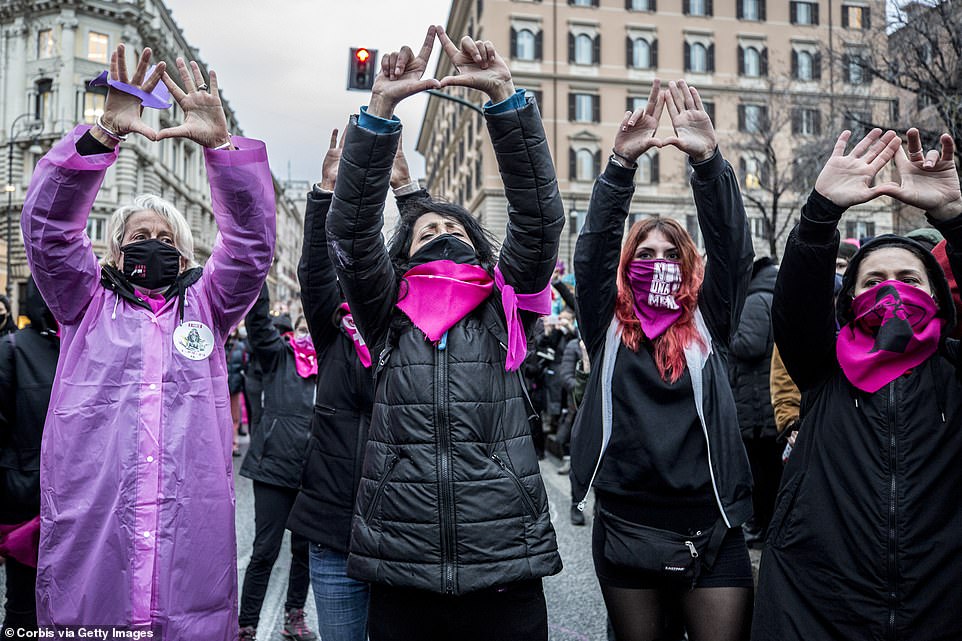 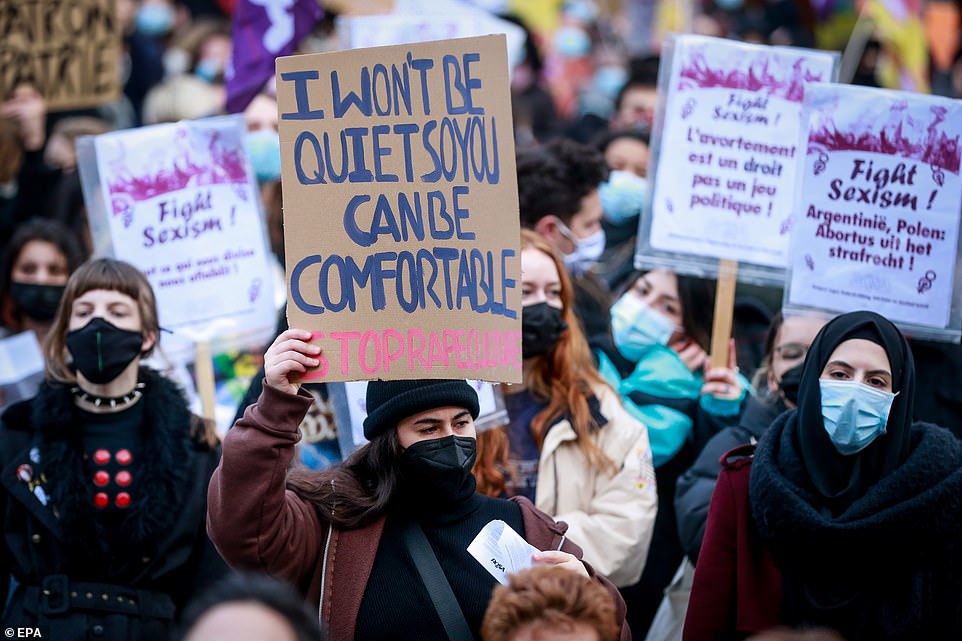 BRUSSELS, BELGIUM: People gather outside Brussels Central station to protest against sexism and violence against women

In Turkey, several hundred Muslim Uighur women protested near China’s walled-off consulate in Istanbul, calling for the closure of mass-incarceration camps in the Xinjiang region.

‘Rape is a crime against humanity,’ read one poster, referring to a BBC report alleging systemic rape and forced sterilization in the camps – charges China denies.

Thousands marched elsewhere in Istanbul and Ankara, many of them angered by a recent viral video purporting to show an attack on a woman by her ex-husband in front of their five-year-old child in the country’s north.

‘We’re not scared, we won’t be silent and we won’t bow down,’ some posters read.

Hundreds gathered in the Algerian capital to protest against a family code that governs family and property relations, and which many view as demeaning to women.

Nearly 2,000 people gathered in Kiev to demand that Ukraine ratify the Istanbul Convention against domestic abuse.

And in Myanmar, where the military seized power last month, women stood on the frontline of anti-coup protests in the commercial capital Yangon.

Police and soldiers there have killed more than 50 people and arrested nearly 1,800 in an increasingly brutal crackdown on demonstrators.

‘Generally, leadership seems to be for men only,’ said 33-year-old protester Cora. ‘In this uprising, women came out in the streets and led the protests.’ 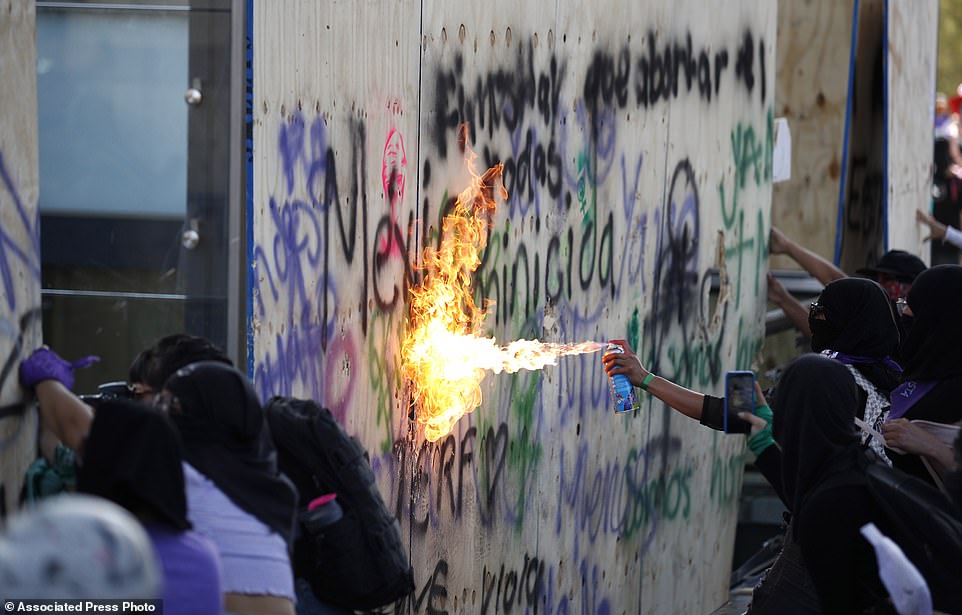 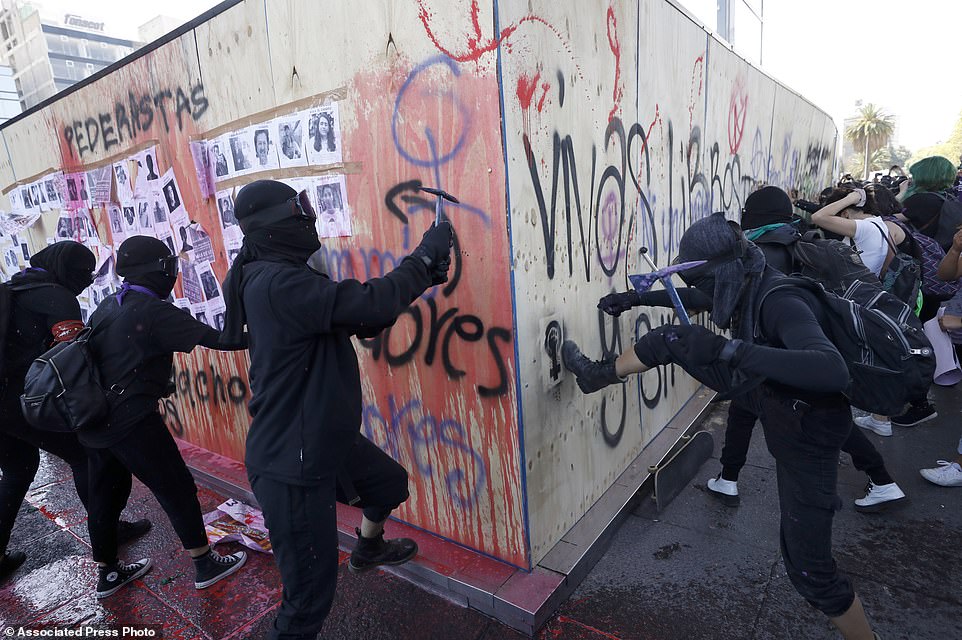 Women attack a wooden wall protecting a Mexico City monument. Authorities estimated there would be almost 100 women’s marches in cities and towns throughout Mexico 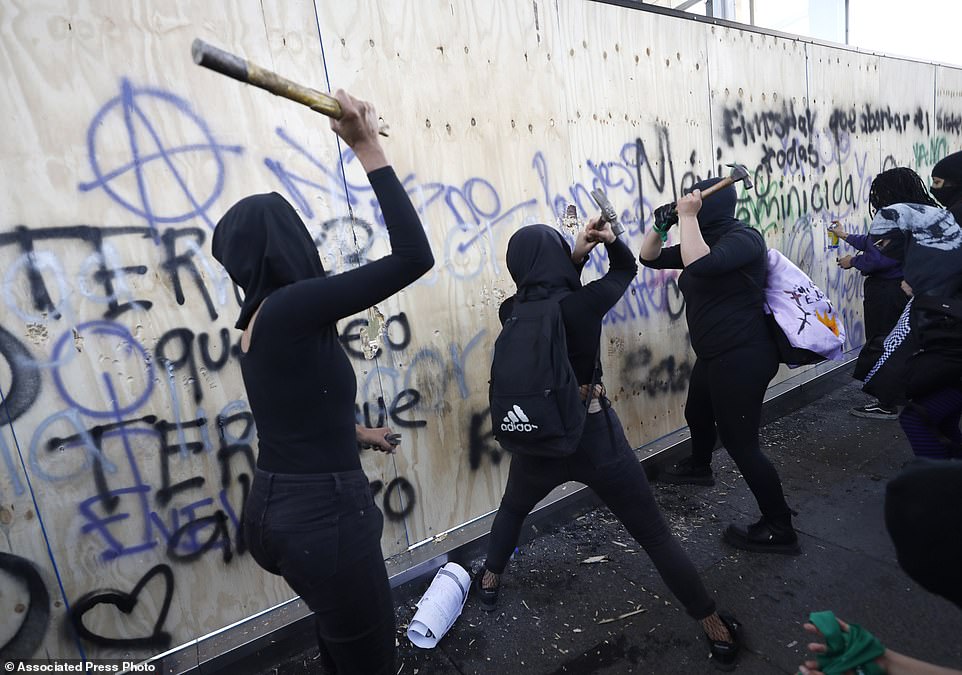 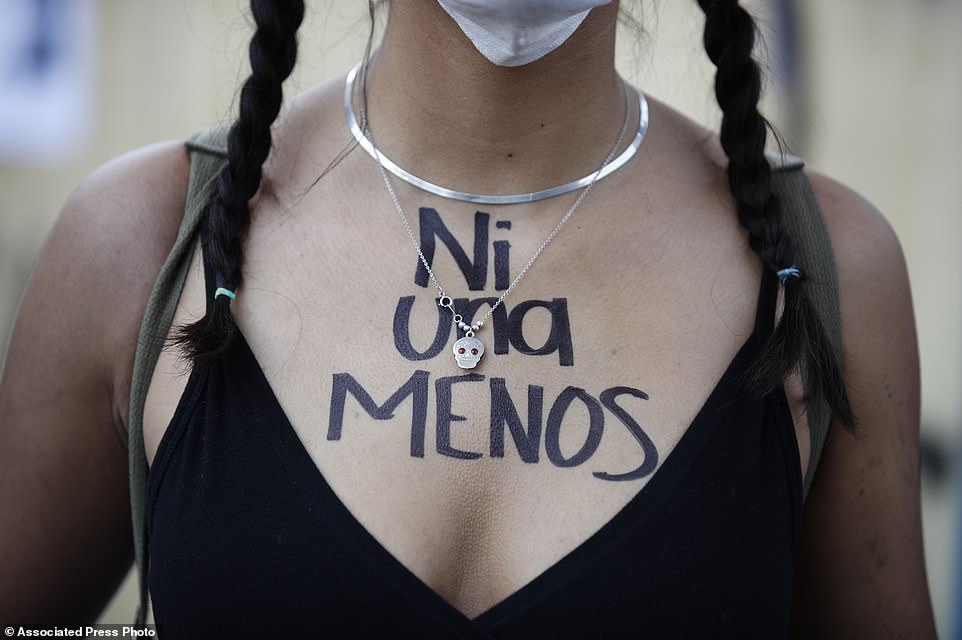 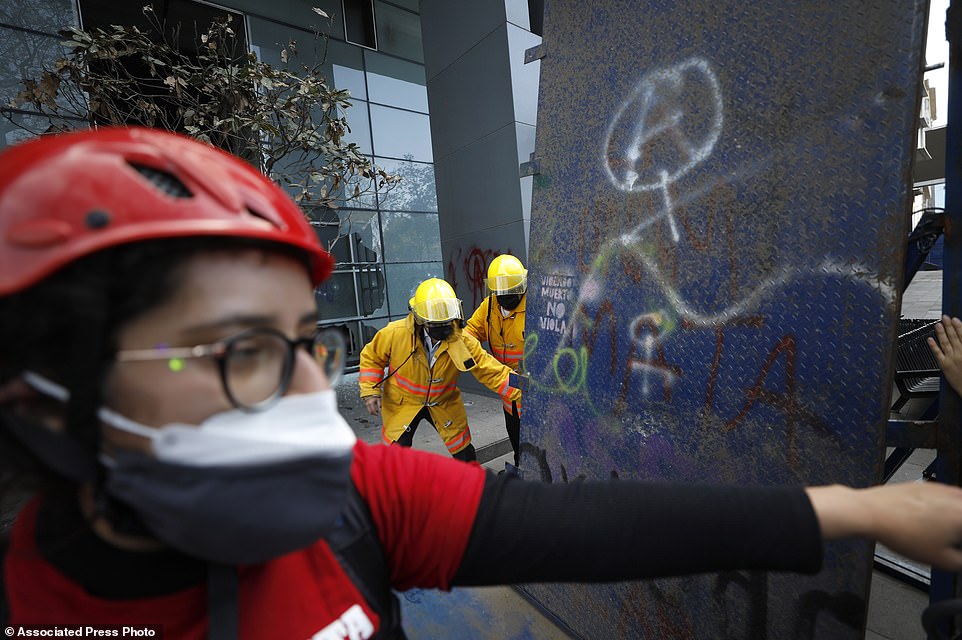 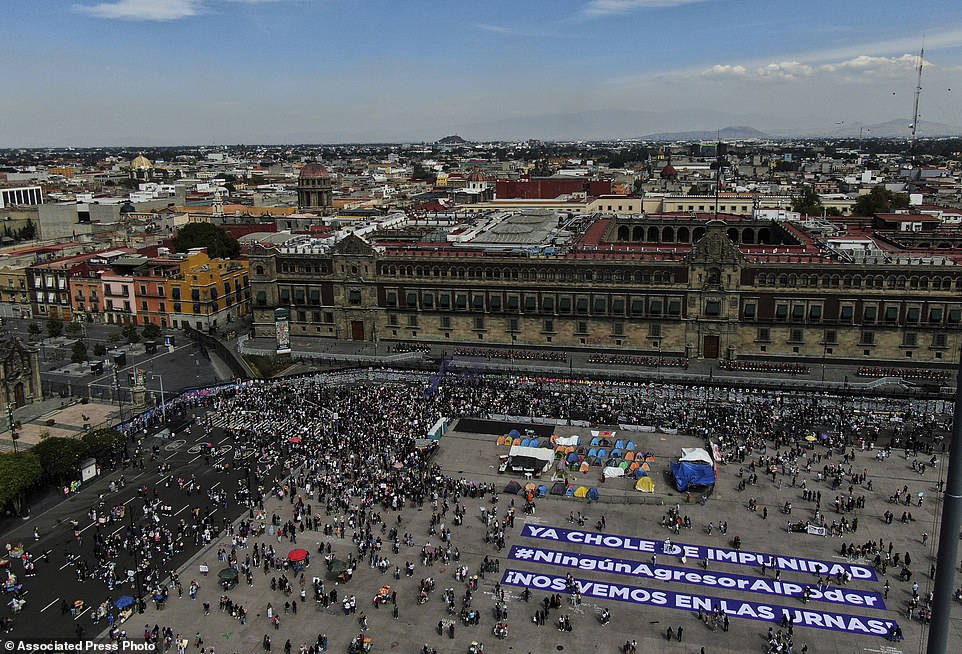 People protest around Mexico’s presidential palace with banners on the ground reading ‘No more impunity,’ ‘No aggressor in power,’ ‘See you at the polls’ 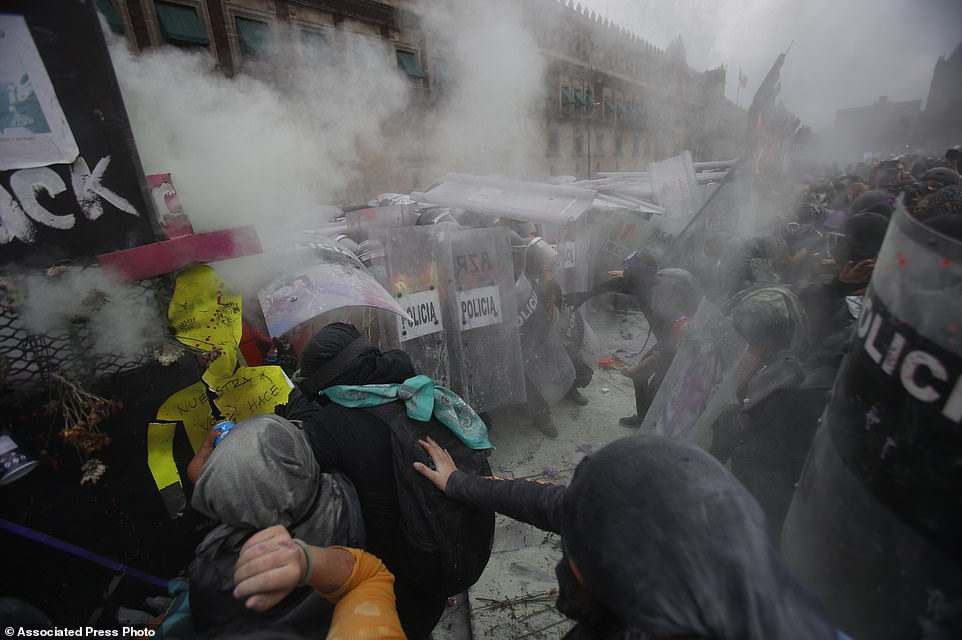 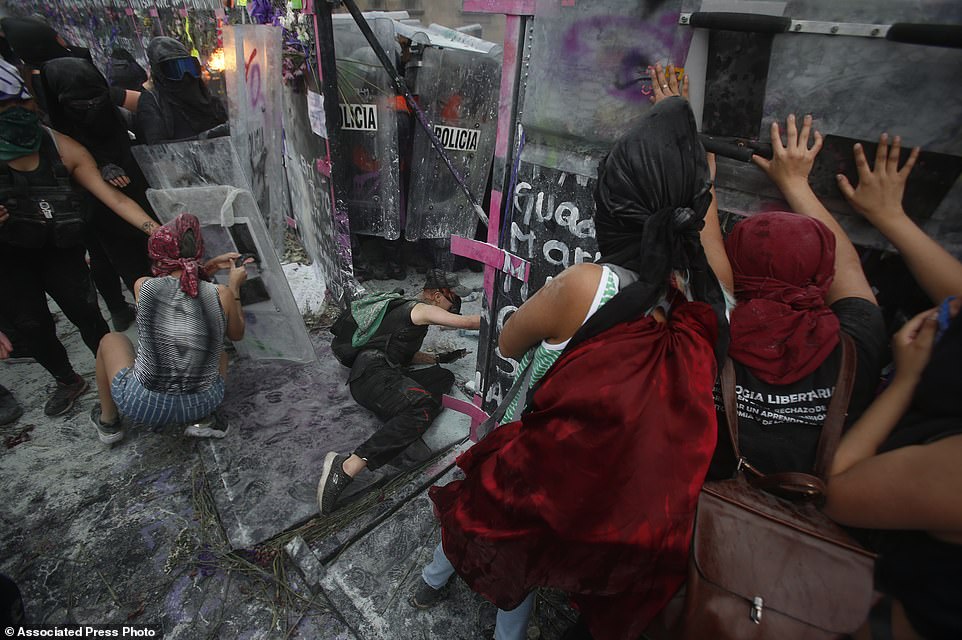 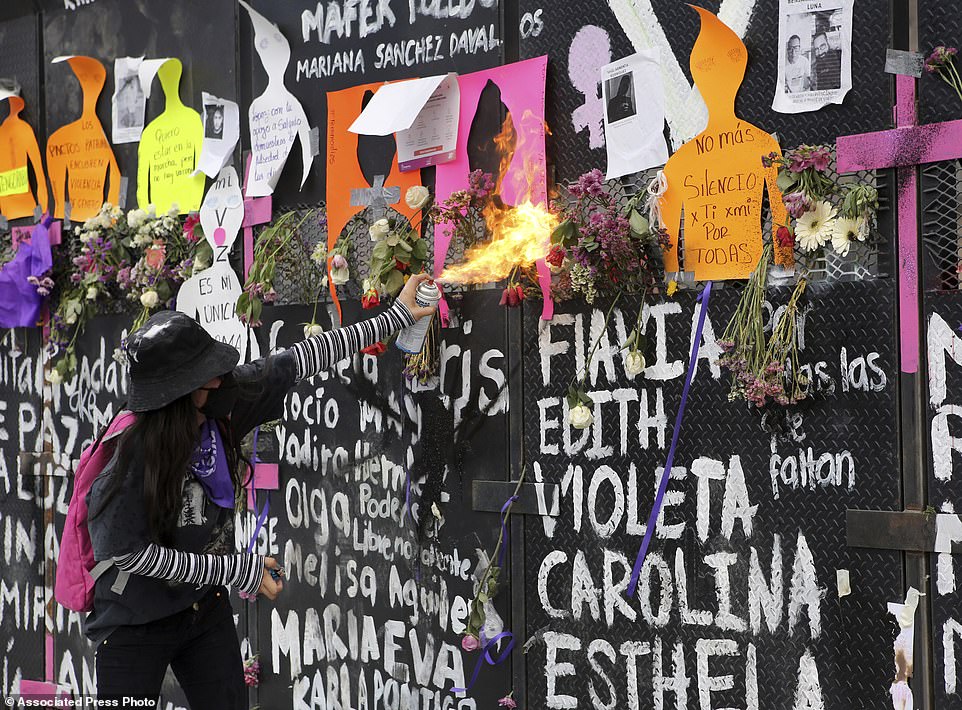 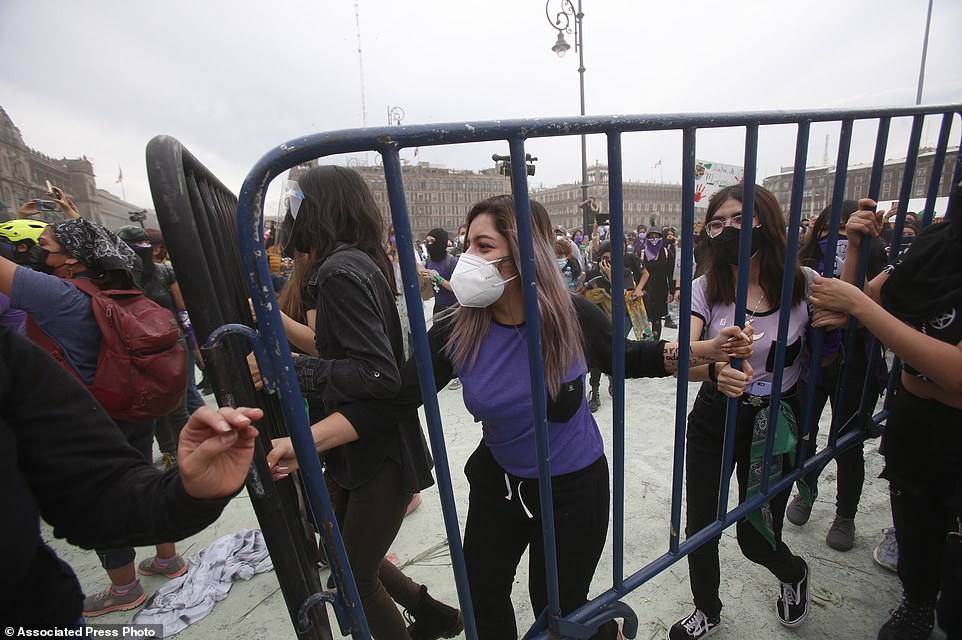 Who is Chris Wallace, moderator for tonight’s 2020 presidential debate?

Giant hairball tears through stomach of teen with ‘Rapunzel’ syndrome

'Jeopardy's' Alex Trebek or 'Wheel of Fortune's' Pat Sajak: Who Has the Highest Net Worth?