The Prime Minister’s new press secretary Allegra Stratton told reporters Mr Gove was doing an ‘excellent job’ on both the pandemic and Britain’s preparations for the end of the Brexit transition period this month.

Newspapers were briefed at the weekend that the PM had clashed with Mr Gove over whether to put London in the top tier of new coronavirus restrictions. 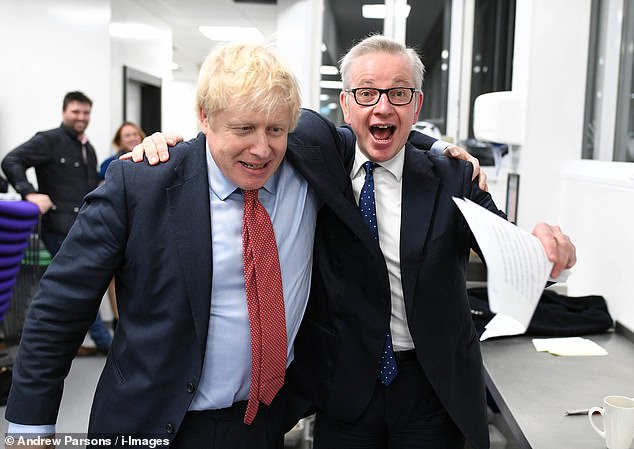 Mr Gove is said to have argued strongly for London to be placed in the highest risk category, only for the Prime Minister to overrule him after the Treasury warned the move would cost an extra 500,000 jobs in the capital.

One Government source was quoted saying he was ‘the biggest dove of the lot’, adding: ‘If he had succeeded in shutting London we could have kissed goodbye to half a million jobs.’

But Miss Stratton yesterday insisted Mr Johnson was happy with the work of his former leadership rival. ‘Michael Gove has been doing an excellent job at the Cabinet Office, which is at the heart of Government on so many of these critical issues,’ she said.

‘If it’s not Covid, then it’s Brexit. If it’s not transition and whether or not we’re prepared then it’s also the Union and the United Kingdom and making sure our relations with the devolved authorities and administrations continue to be good.’

She added: ‘Michael Gove is at the heart of the most critical projects.’

Senior Tories have been urging the Prime Minister to conduct a reshuffle to complete the ‘reset’ of his government following the departure of chief adviser Dominic Cummings last month.

After macOS 11 Big Sur disappointment this week …has release date finally been revealed?