Escorted out by security, told to use ‘English’ names and to ‘go back’ to foreign countries: More than HALF of minority MPs say they have experienced racism and prejudice in the Houses of Parliament

More than half of politicians from minority backgrounds say they have faced racist abuse from their fellow MPs, a damning poll reveals today.

Black and minority ethnic (Bame) MPs highlighted a catalogue of mistreatment while working in Westminster and out on the campaign trail.

Some 51 per cent said they had faced prejudice at the hands of fellow MPs, while more than six in 10 said they had been discriminated against by staff in the Houses of Parliament.

It comes after new Bame MPs entering the Commons for the first time after December’s election spoke of their fury at politicians and some parts of the media struggling to tell them apart.

Among the shocking revelations in a survey by ITV News, part of an investigation to be broadcast this evening:

Bradford West Naz Shah told ITV: ‘You battled your way [to Parliament] here, broken the glass ceiling, you’re actually here where there’s going to be equality, where we can advocate equality for the whole of the country and that’s what we’re supposed to be doing but actually we’re landing somewhere we don’t have that equality. 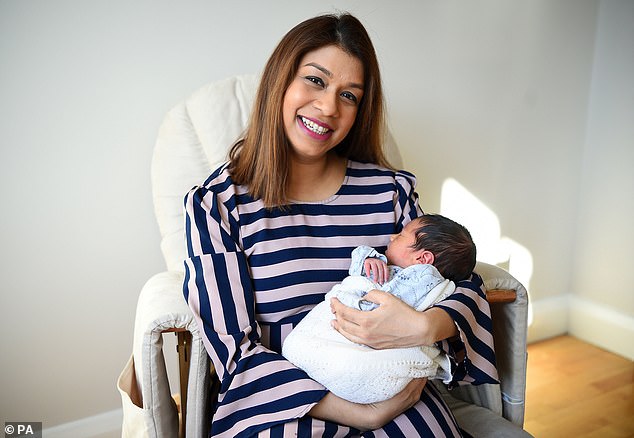 Labour’s Tulip Siddiq, (pictured with her son last year), said a colleague voiced surprised when she was pregnant with her daughter Azalea in 2017 that she had been told she was expected a girl because Asian people were more likely to abort children if they were female 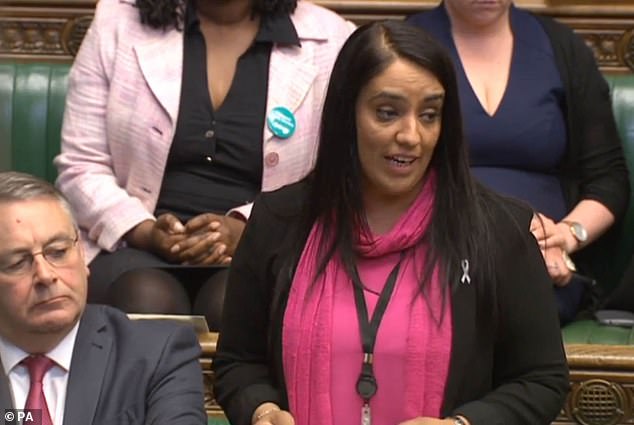 ‘Even if you look at the last few weeks with the Select Committees, 20 select committees not one Bame MP was made chair.’

Mr Khan added: ‘You get loads of tweets saying you’re drumming on about Muslims. There is a simple solution, go back to Pakistan.

‘There is a license now to challenge people’s right to be here. For over 50 plus years I’ve been here, this is my country, everything I have, everything I want to give back is to this country.’

Last month two black Labour MPs hit out at racism in Parliament after being mistaken for each other and even being asked to carry bags by fellow MPs who assumed they were lowly staff.

Florence Eshelomi and Abena Oppong-Asare both took their London seats for the first time at December’s general election.

But they were less than impressed by their experiences in their first few weeks in Parliament.

Erith and Thamesmead MP Ms Oppong-Asare hit out on Twitter, saying: ‘The other day I was outside the chamber talking to (Rosena Allin Khan) and one of the Tory MPs walked straight to me to put his bag in my hands asking me to look after it.

‘In my first week someone came up to me confusing me with another black MP. 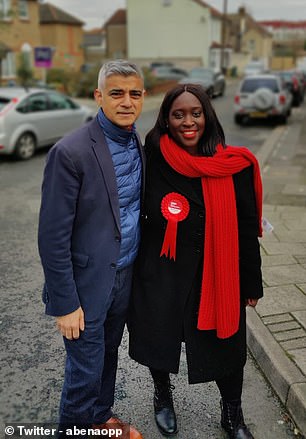 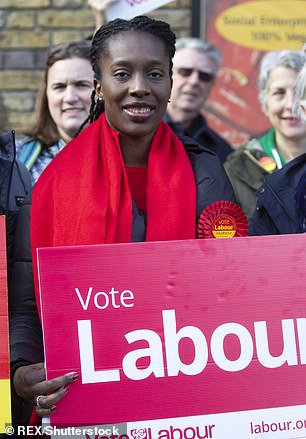 Florence Eshelomi (right) and Abena Oppong-Asare (left) both took their London seats for the first time at December’s general election.

‘I said no I’m the other black sista from (Erith). He raised he eyebrows and said wow there’s more of you.

Her revelations prompted new Vauxhall MP Florence Eshalomi, 39, to share her own experience.

The new parliamentarian, who took the seat after the retirement of veteran Labour MP Kate Hoey, said: ‘Girl I also got confused for another black sista MP as we were coming out of the voting lobby…… but I have to admit it was by a fellow Labour MP.

‘Guess we all need to wear massive name tags right.’

A House of Commons spokesman said: ‘It is unacceptable that some MPs have experienced racism, and we are particularly concerned to hear of instances occurring on the Parliamentary Estate.

‘We are committed to taking any necessary steps to ensure this does not happen in future.’

All Aboard! Jude Law and Eddie Redmayne Surprised Fans at King's Cross Station