WHAT’S the exact opposite of being cancelled?

I really don’t know, but it’s definitely happened to actress Miriam Margolyes who, back in May 2020, wished Covid death upon a political enemy.

Had her target been Greta Thunberg, or any other sacred cow, of course, she would never have worked again. 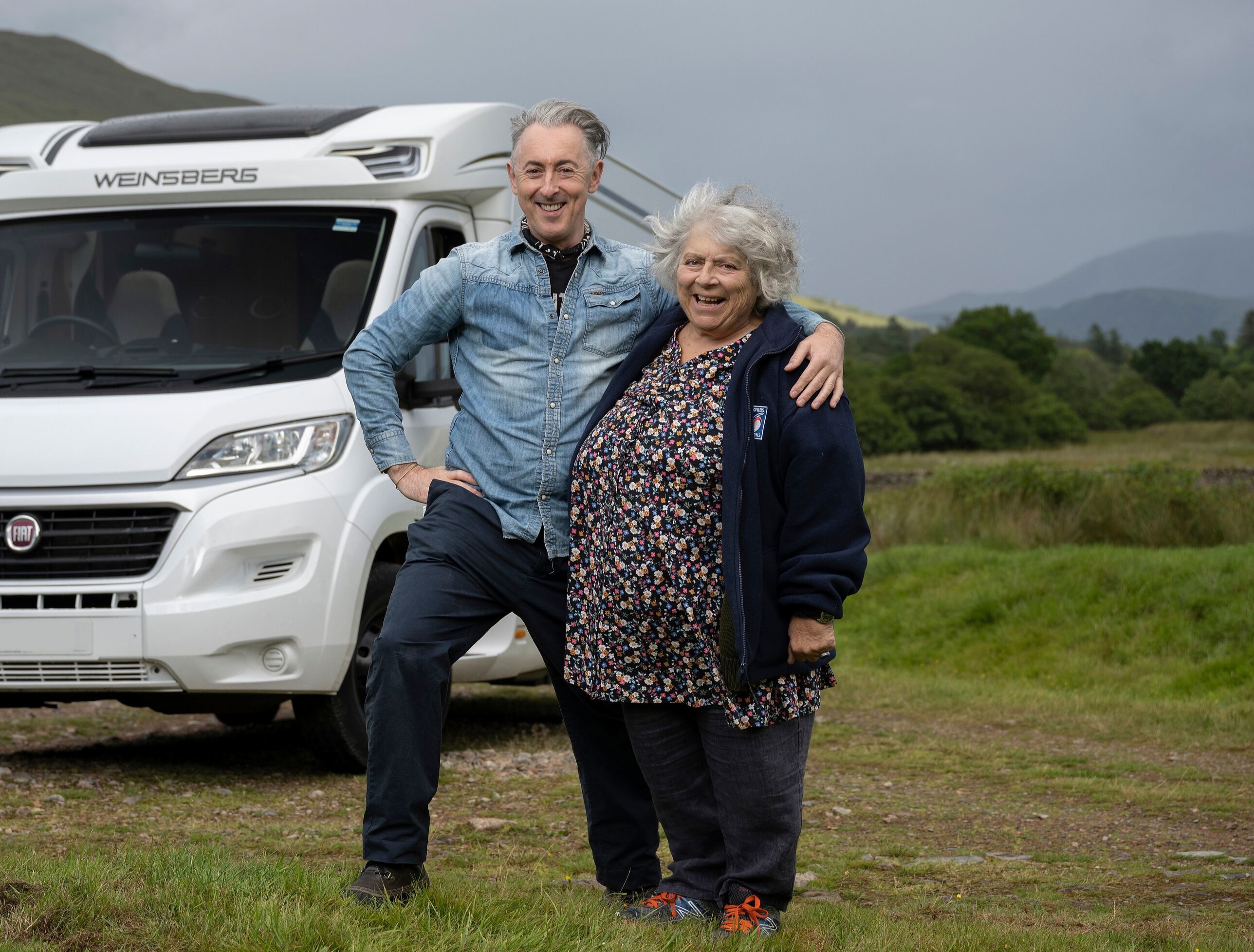 It wasn’t, though. She wanted the Prime Minister dead and subsequently ­castrated, so she’s across all the major channels and finds ­herself endlessly indulged by Phillip and Holly on ITV, hosting travelogues for the BBC and now doing exactly the same on our other state-owned broadcaster.

If there’s one thing television likes more than a couple of self-absorbed luvvies on holiday, though, it’s a genealogy show, like Who Do You Think You Are? and both Miriam and Alan, the viewers were assured, had a longing to “reconnect with their Scottish ancestors”.

So off Channel 4 had packed them in a gigantic camper van, with a chemical toilet and an extremely brave film crew.

First stop of the series? Allison Street on Glasgow’s Southside, where they quickly established Miriam’s dad had been born, thereby bestowing on his daughter the right to mimic the local accent, in whatever fashion she damn well pleased.

A move which, in terms of endearing yourself to the ­residents is, I promise you, right up there with erecting a 200ft gold statue in ­honour of the 1966 World Cup linesman on Arthur’s Seat.

Yet she still hadn’t taken the hint by the time they arrived at the second stop, a woollen mill in beautiful Evanton, on the Cromarty Firth, where Alan had got the owner to create their own compound tartan with the sniggering name of “Aliam”. 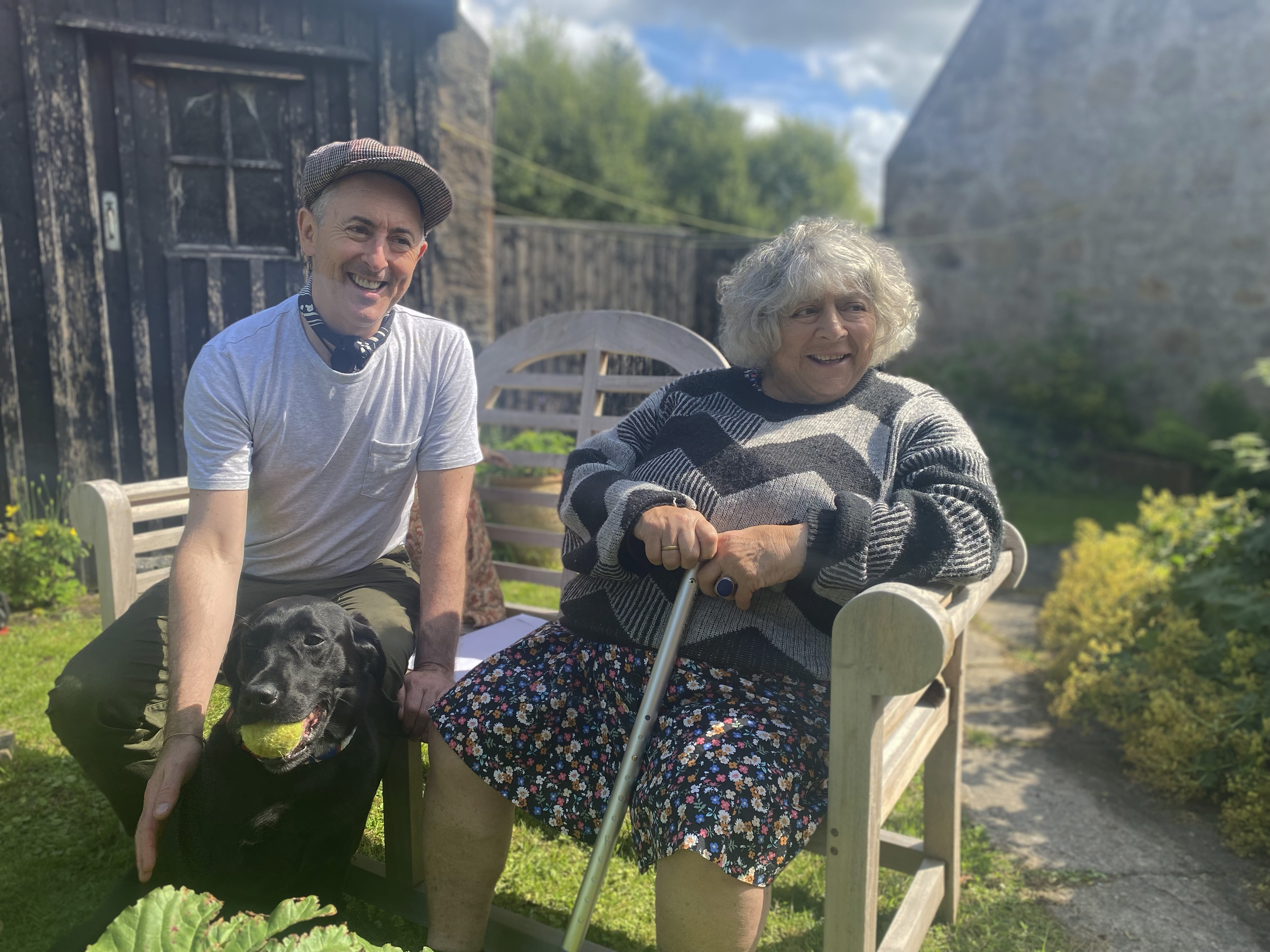 A pink and yellow creation, this one, which was such a monstrosity to behold that once fashioned into a toilet seat cover it looked like ­nothing so much as Mr Blobby’s colostomy bag.

I need hardly tell you, then, the pair of them absolutely loved it.

By rights, given the subject matter, I should also have liked this show. But I didn’t because it wasn’t about ­Scotland at all.

It was all about the two hosts and their egos. Thanks to the random nature of the pairing and meandering route, there was also a lot of downtime and a fair few false dawns on this show.

Miriam attempted to fill some by talking about her bowel movements and visiting Fordyce, where she’d filmed some long-forgotten drama called The Lost Tribe, with Bill Paterson.

Kick in the TV nuts

Alan tried to do likewise by unsuccessfully resolving issues with his late father, at his childhood home in Panmure, and quoting Shakespeare . . . a lot.

He’d got it into his thick thespian head, you see, that he was directly related to Scottish aristocracy on account of the fact he looked a bit like a portrait of some fey young dandy at Cawdor Castle, which is linked to the play Macbeth.

To that end, he and the present Lady Muck had both taken DNA tests that, for ­dramatic end-of-show ­purposes, would prove beyond a shadow of a doubt . . .

Not even remotely. A kick in the TV nuts that momentarily silenced both Alan and ­Miriam and left the viewers free to wonder why Channel 4 had gone to the bother of making the show.

Must admit, I’m a bit baffled as well, but think it’s tied in with the stuff I mentioned at the start, and also gives C4 the illusion of diversity and inclusion even though (beyond Anne Robinson) it’s not got much interest in employing older female presenters, unless they share exactly the same political agenda as Miriam.

The silence was only momentary, however, and no sooner had she got over the initial shock than Miriam was asking: “Are you disappointed?” Disappointed? Oh, Miriam. Disappointed doesn’t cover it.

GREAT TV lies and ­delusions of the month.

Life & Rhymes, Benjamin Zephaniah: “Members of the audience will have the ­opportunity to word-up and express themselves to the ­people. Isn’t that a great thing?” No.

And The Last Leg, Jodie Whittaker: “I was a brilliant barmaid, but it’s a skill I’ve left behind.”

Yeah, four Stellas and a bag of nuts please, luv. 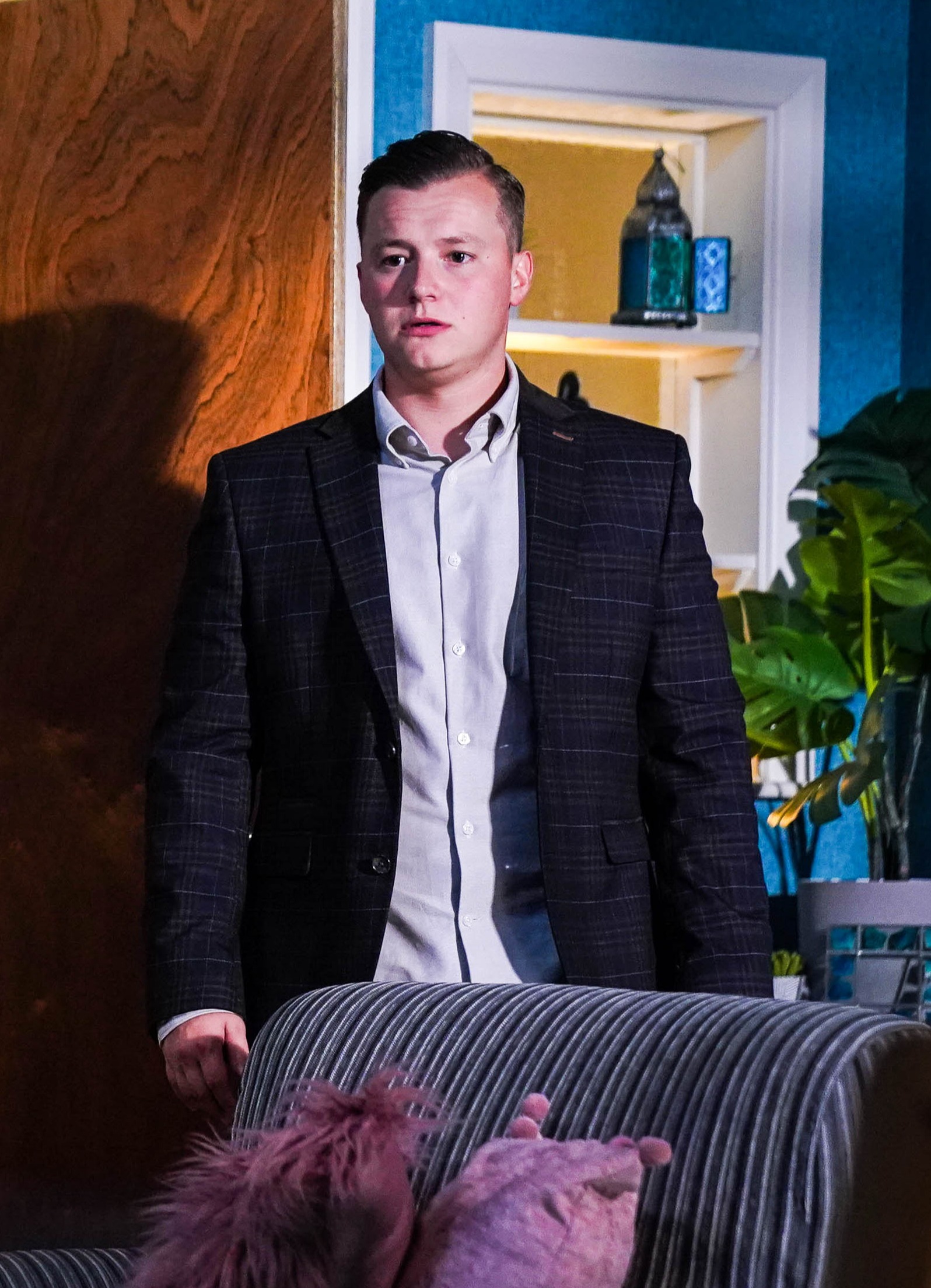 ON Tuesday’s EastEnders, viewers discovered loathsome Aaron Monroe and a group of far-right thugs had attacked a Muslim taxi driver and daubed a swastika on the proposed site of the show’s new mosque.

A storyline somewhat at odds with real-life events this week, obviously.

But that’s EastEnders for you. It always claims the show “reflects the reality” of London life, yet it turned an artistic blind eye to the 7/7 bombings, which killed 52 innocent people in the capital, the Westminster Bridge attack, two further terror outrages at London Bridge, and the three Bethnal Green schoolgirls who ran off to Syria to join the Islamist death cult, presumably because they didn’t fit the soap’s fixed, right-on narrative.

EastEnders still remains perversely convinced it always occupies the moral high ground, so it’ll no doubt convince itself this latest twisting of the truth is a brave stand against blah blah blah when at best it’s foolhardy and at worst it’s an unforgivable act of cowardice which treats its own viewers as naive morons who need to be taught the error of their reactionary ways.

Those that haven’t already switched off seem to have worked out Aaron and his fascist gang are behind the EastEnders terrorist attack that’s set to “delight” us all at Christmas.

Although there’s no need to try to guess which characters will be killed off if they’re right about the bombing storyline.

Carry on with this deranged plot and it’ll pretty soon be all of them.

lTV mysteries of the month. Who thought it was a good idea to install a camera in the toilet of Miriam Margolyes’ Lost In Scotland camper van?

What the hell is everyone laughing at on Never Mind The Buzzcocks?

And was Naked, Alone And Racing To Get Home an actual E4 show or just a very bad dream I had?

TIPPING Point, Ben Shephard: “The medical abbreviation IVF stands for In Vitro what?”

Ben Shephard: “Ealing, Acton and Chiswick are areas in which capital city of the UK?” Emma: “Pass.” Ben Shephard: “The dish Lyonnaise potatoes gets its name from which French city? LYON-naise.” 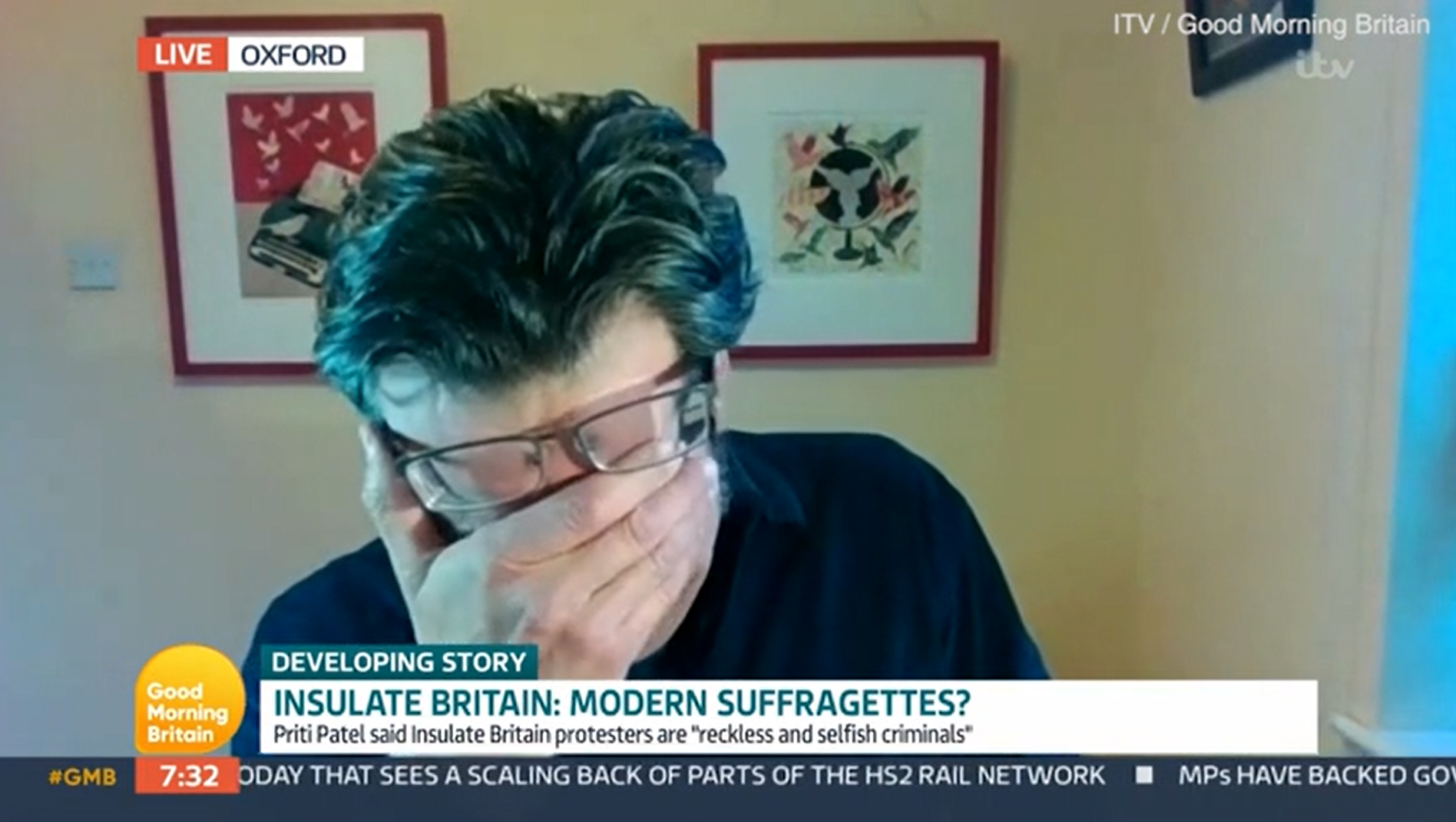 HAVE I Got News For You presenters now routinely delivering an applause-chasing speech to the studio audience.

Doctor Who taking a turn for the utterly ­incomprehensible. EastEnders’ Heather “Eve” Peace attempting to act drunk (make it stop). And Benjamin Zephaniah’s Life & Rhymes offering up the wokest ever mission statement in Sky Planner history: “Talented spoken word performers and members of the public offer their poetic takes on veganism, misgendering, disability and feminism.”

My own preferred “pronouns”, when addressing this show, being “P***” and “Off”.

BEST quiz show answer of the week. The Chase, Bradley Walsh: “Whose autobiography is subtitled ‘From Del Boy to Granville, Pop Larkin to Frost’?”

MICHAEL DAWSON: “As captain of United you’re going to get stick whether you’re captain or not.”

Robbie Savage: “As an individual, you’re a ­collective.”

Glenn Hoddle: “I was ­naturally gifted but that didn’t come easy.”

TV QUIZ. During Miriam And Alan: Lost In Scotland, what embarrassing incident did Miriam Margolyes reveal happened during her driving test?

A) Her knickers fell down getting into the car?

B) She farted a landslide on to the A83 during the hill start?

Or C) Her arse started beeping when she reverse parked? 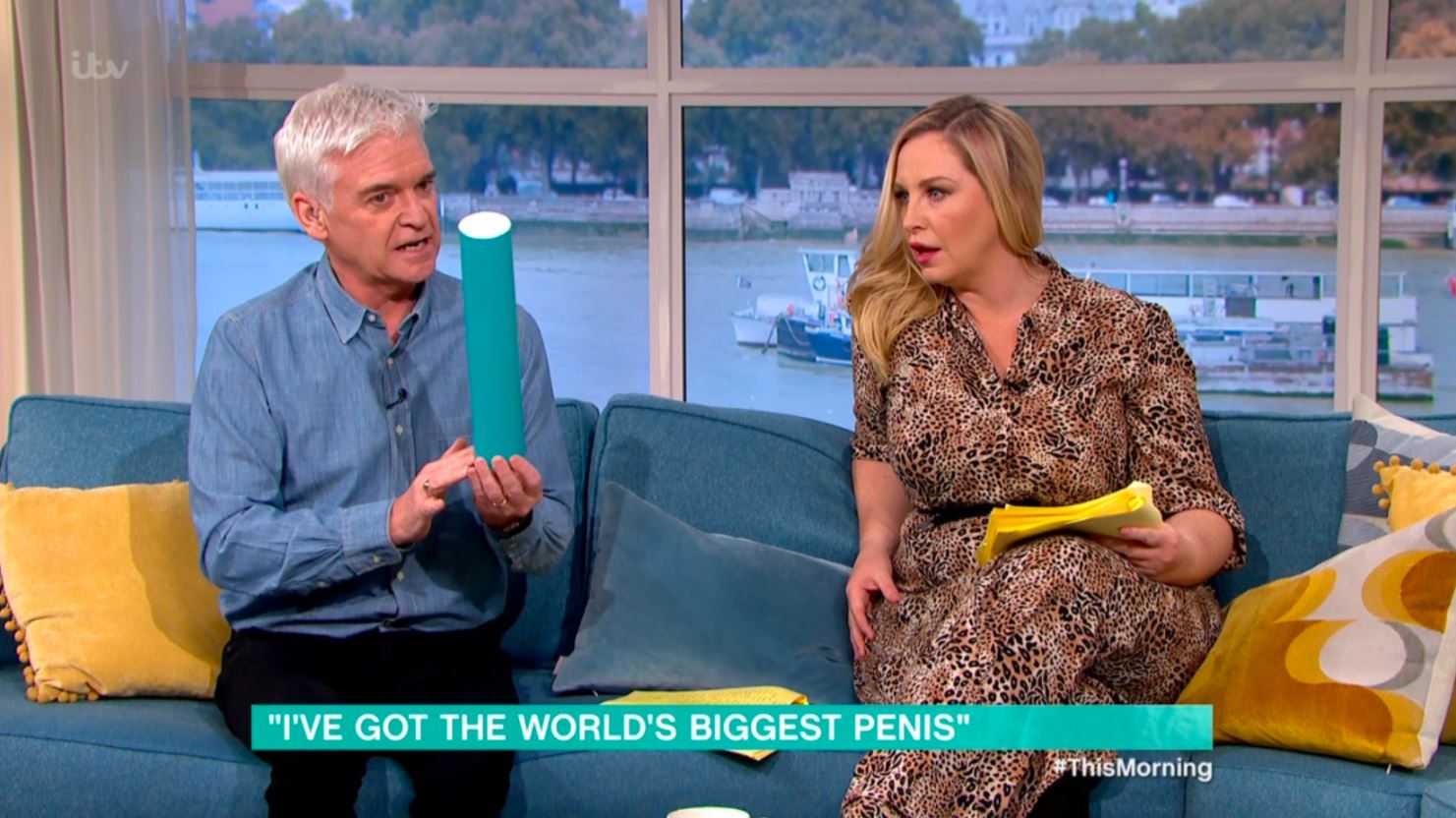 Phillip Schofield’s not unreasonable response to This Morning guest Jonah Falcon, “the man with the world’s biggest penis”, revealing he’s in a long-distance relationship: “Well that’s alright, because you’ve got a . . . .”

The utterly enchanting Rose Ayling-Ellis all but ­winning Strictly with that silent dance, on Saturday night.

And Ally McCoist having what sounded like a very “private moment” as John McGinn and Scotland toyed with Denmark at Hampden Park, on Monday night: “Oh keep going, John. Oh . . . oh . . . OH, OHHHHH NO. Oh that was fantastic.” 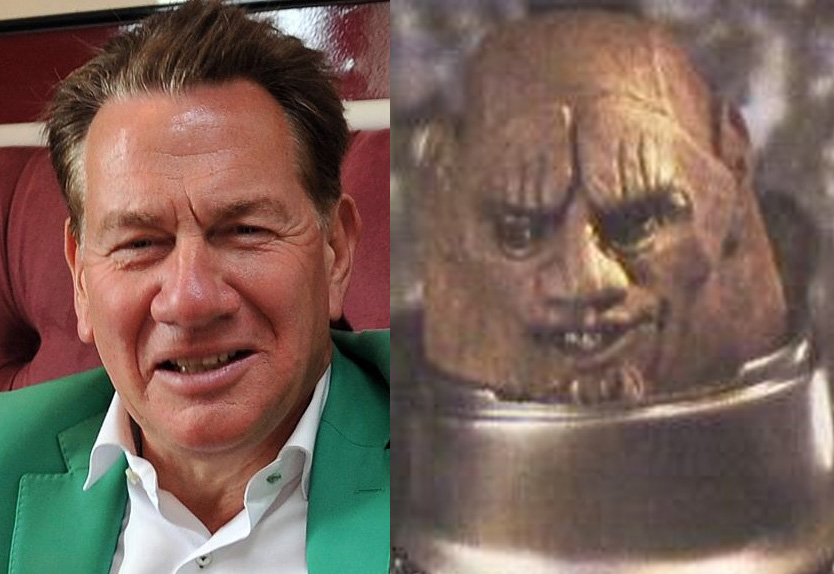 THIS week’s winner is train-loitering BBC2 oddball Michael Portillo and one of Doctor Who’s Sontarans. Sent in by Big Chris, Kent.

Demi Lovato Is Stable and Alert After Apparent Overdose

Being the Ricardos: Nicole Kidman and Javier Bardem Become Lucy and Desi in Full Trailer for Amazon Movie — Watch