Up to 1.5million modern flats could be unmortgageable for as long as a decade amid crisis over building safety in wake of Grenfell Tower blaze

Thousands of moderns homes will be unmortgageable for years amid a crisis over building safety standards in the housing market.

Owners of up to 1.5 million high-rise flats could have to wait as long as a decade to get sign-off to prove they are safe in the wake of the Grenfell Tower fire.

The tragedy in 2017, which killed 72 people, exposed decades of ‘utter rubbish’ building work and regulatory failure that left flammable materials on the building to feed the blaze that ripped through dozens of homes.

Now one in 16 homes in England need to be checked for similar types of cladding, as well as insulation, balconies and wall structures to make sure they comply with safety rules. 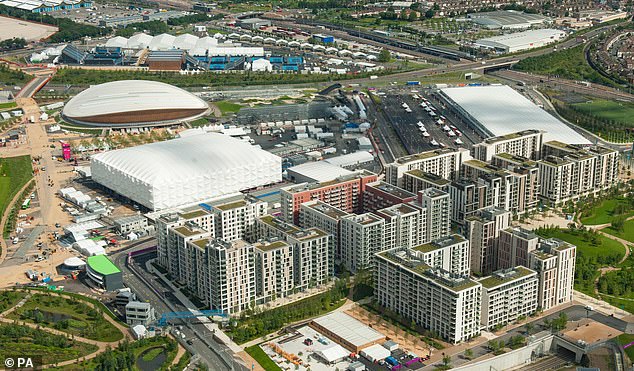 Thousands of moderns homes will be unmortgageable for years amid a crisis over building safety standards in the housing market. Pictured: Surveyors have said flats in London’s Olympic Village marketed at £600,000 are now almost worthless

Without the proof, banks will not give out mortgages meaning owners cannot sell, meaning hundreds of looking to move up the property ladder are now stuck.

Checks on the flats could take ‘five to 10 years’, according to experts.

Rob Leary and girlfriend bought a one-bedroom flat in Stratford three years ago, but when they split up in 2018, they agreed he would stay in the east London flat and buy her out of her share.

To raise the money he approached Santander to remortgage the flat, which had cost £340,000.

‘We got to the stage of a surveyor coming round and it all seemed fine, and then I started to get a series of calls saying they needed information on the cladding,’ he told Homes and Property. 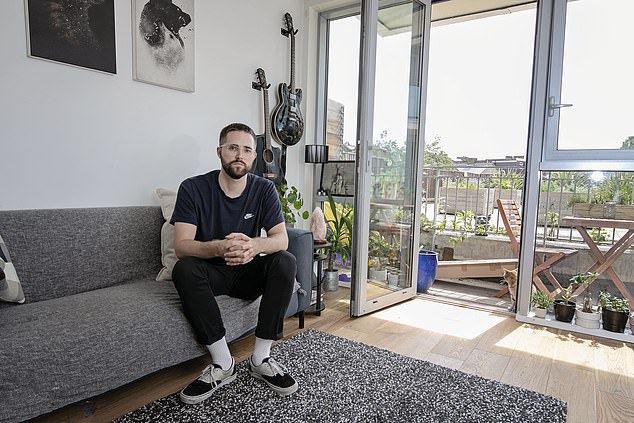 Rob Leary and girlfriend bought a one-bedroom flat in Stratford three years ago, but after trying to remortgage the property he was denied lending because of unchecked cladding on the side of the building

Rob’s home is in a block covered in ceramic rain screen cladding, which while not actively condemned, have also not received the safety all-clear in the fallout from the Grenfell fire.

As a result, blocks with cladding need to be inspected to ensure they comply — a job which should be carried out by the managing agent or building owner, in Aurora’s case One Housing Group.

But eight months on the cladding has not been inspected by the managing agent or the building owner One Housing Group, leaving Rob in limbo.

‘As things stand my flat is worth zero,’ he says. ‘I am not the only one. There are people at Aurora who want to sell, and this is holding up people’s lives.

‘And obviously there is the safety issue. We do not know if this cladding is combustible or not. There are families in the block, children, old people, young people. It is a big worry.’

Rob added that he is fortunate that his ex is understanding about being owed a five-figure sum. 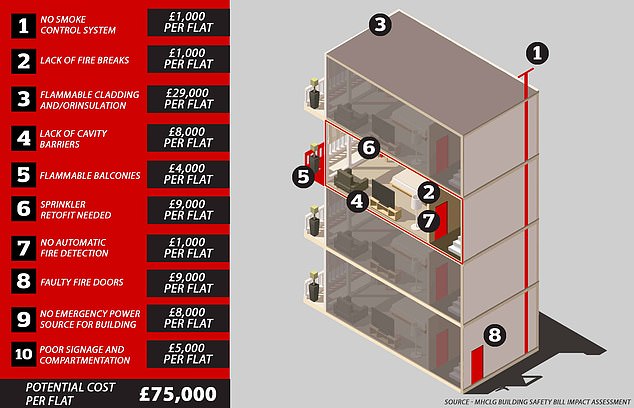 Under leasehold law, flat owners must pay for repairs. Typical cladding bills are £30,000 a flat, but have reached £115,000 in one Manchester block

But even when owners do get a safety check, any flat that does not pass will be billed for repairs, which owners will forced to pick up.

So far, nine in 10 blocks have failed new safety checks, an investigation has revealed.

Under leasehold law, flat owners must pay for repairs. Typical cladding bills are £30,000 a flat, but have reached £115,000 in one Manchester block.

Costs that could be incurred include £4,000 to replace flammable balconies,  £29,000 for unsafe types of cladding and insulation and £1,000 each for smoke control systems or adding fire breaks. 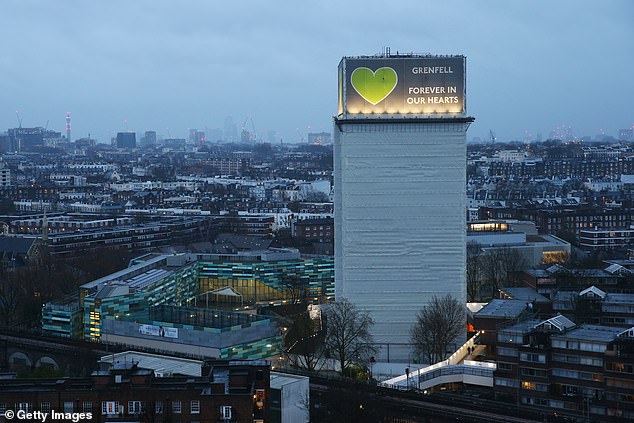 The tragedy in 2017, which killed 72 people, exposed decades of ‘utter rubbish’ building work and regulatory failure that left flammable materials on the building to feed the blaze that ripped through dozens of homes

In the Olympic village in London, the leaseholders of flats that Boris Johnson called ‘swankier than the swankiest Marbella timeshare’ about 360 flats in 11 tower blocks have small amounts of the cladding that fuelled the Grenfell fire.

The rest of the village’s 63 block also lack detailed fire report, including ‘external wall system’ (EWS1) forms, to prove the safety of the cladding, insulation and walls.

In some cases, surveyors have valued flats marketed at £600,000 as worthless.

Rachael Grundy, 29, and her best friend own only 25 per cent of their flat in East Village but would be liable for 100 per cent of work costs under the shared-ownership agreement.

‘I’ve never suffered from mental health issues,’ she told The Sunday Times. ‘Now, I am an extremely anxious person.’

About 700,000 people are still in high-rise flats with dangerous cladding. Millions more face waiting up to a decade for the safety sign-off they need to sell or get a new mortgage

‘They’re trapped and they’ve got nowhere to go . . . If the property chain is broken, the whole housing market could be affected,’ said Clive Betts MP, who chairs Parliament’s housing committee.

New Covid 'belt' emerges from East to West – is YOUR area on the hotspot list?

December 21 2020: Conspiracies claim 'end of the world' and 'black superpower day' will align with winter solstice