A BUNGLING cop on a bike is captured on dashcam footage as he flips head-first over his handlebars in hot pursuit of a suspect.

The hapless policeman can be seen flying through the air before face-planting on the ground in the "rather funny" video. 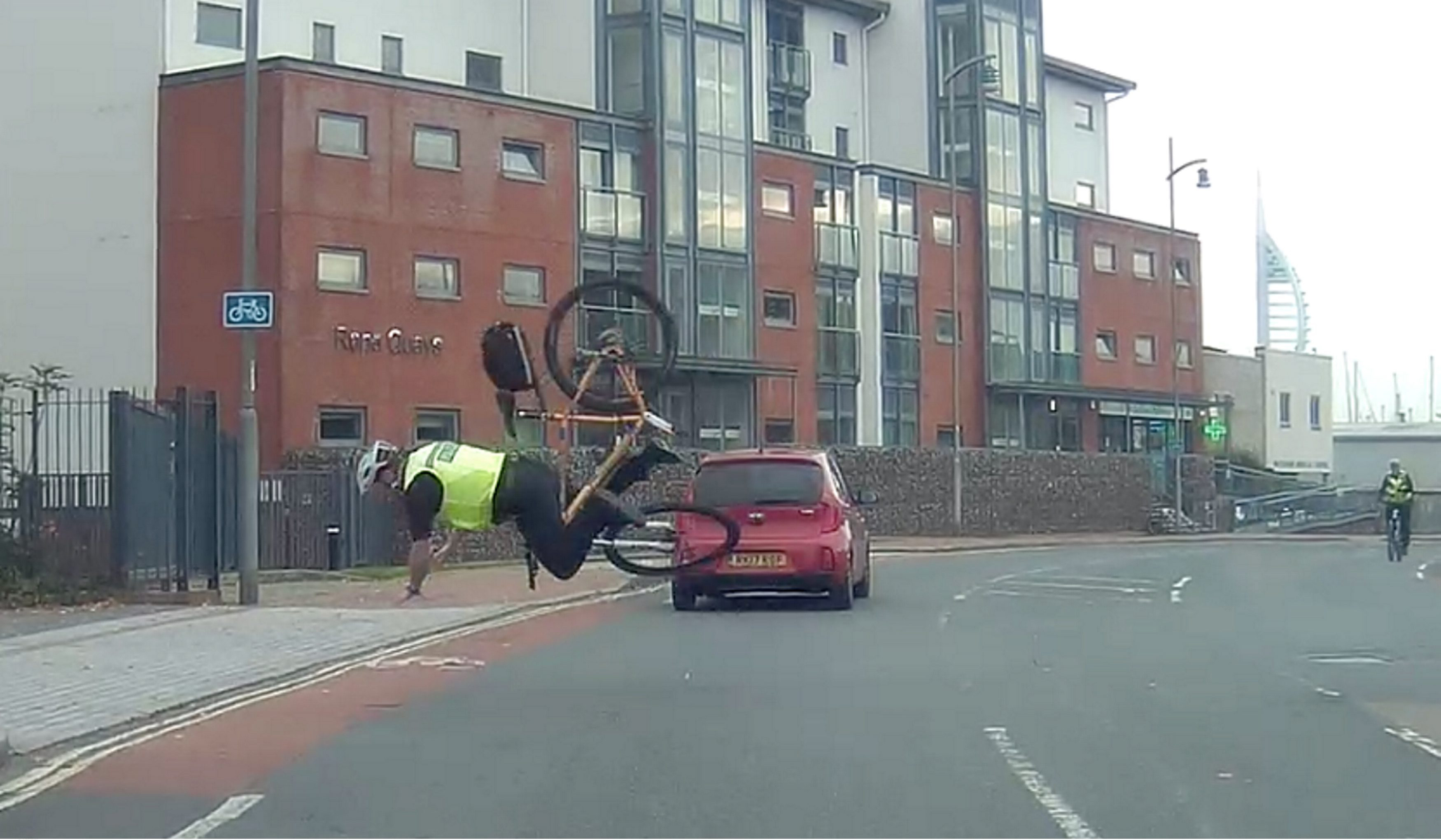 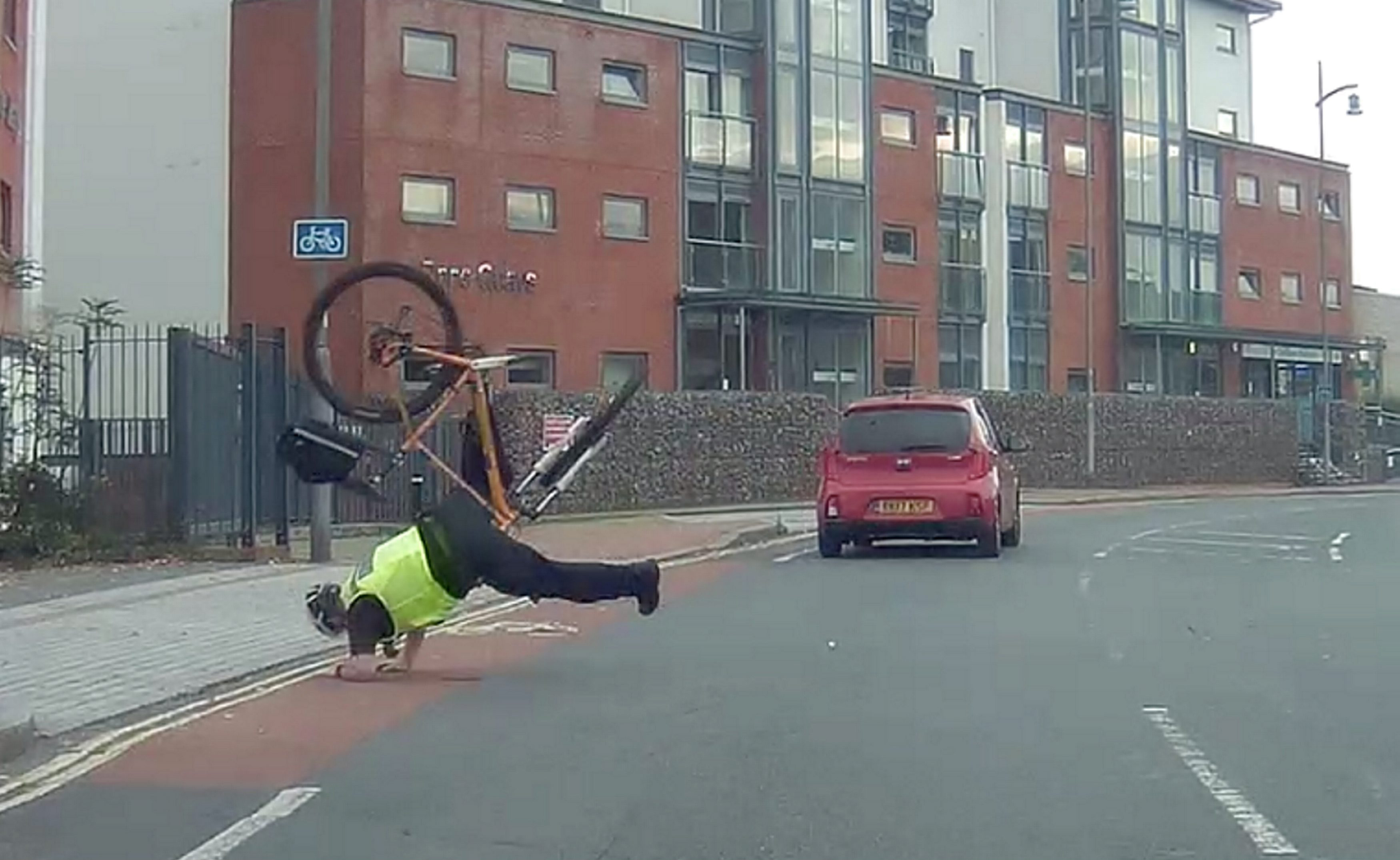 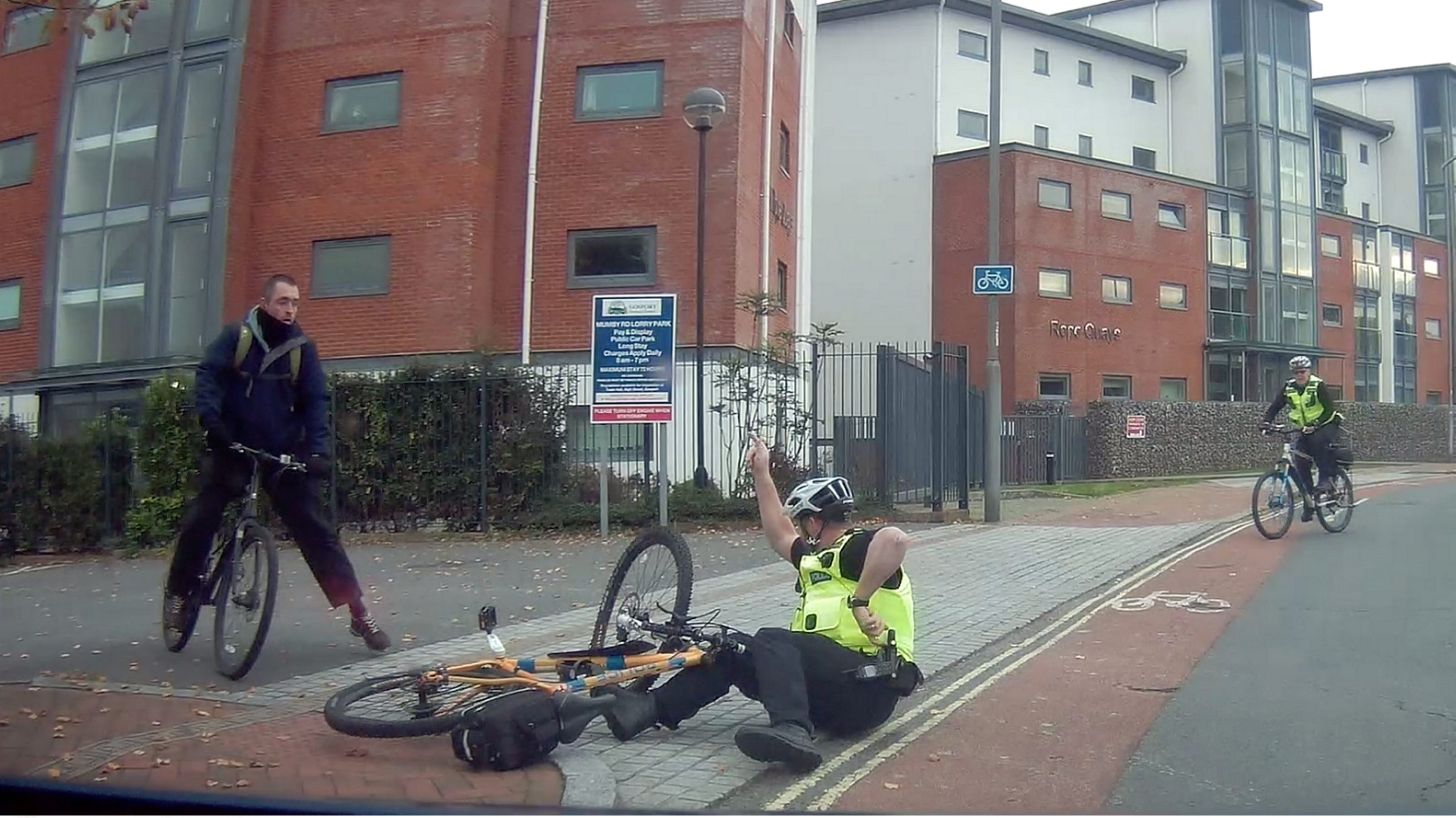 The dashcam footage initially shows two PCSOs on bikes in pursuit of a cyclist who pedals across a busy road, crossing oncoming traffic.

As the man they are pursuing crosses the A32, in Gosport, Hants, the leading officer tries to swerve between two cars to follow him.

However, the officer appears to pull hard on the front brake, causing him to flip head-first over the handlebars in the unfortunate accident.

As he picks himself up from the ground, the red-faced PCSO can be seen motioning to his colleague, instructing him to chase after the suspect who pedalled off into a car park.

'WATCHED IT OVER AND OVER AGAIN'

The owner of the dashcam footage, who wishes to remain anonymous, today revealed it made her laugh so much she 'watched it over and over again'.

She said: "The first thing I saw was a guy riding really quickly across the road, and I thought 'oh he's going fast'.

"The red car in front of me stopped to let him go and then that's when the policeman did his flip.

"The policeman gave me a thumbs up and I realised he was alright – when I first saw it I thought he was going to break his neck."

The female motorist added: "I actually pulled over a few minutes later because I was in a bit of shock and watched the footage back.

"I watched it over and over again and had a good laugh to myself because it is rather funny."

The force tweeted: "We are pleased to report the officer in question is okay, has been checked over at hospital and has only minor injuries.

"Thank you for all the messages of support."

It is not clear if the suspect was caught. 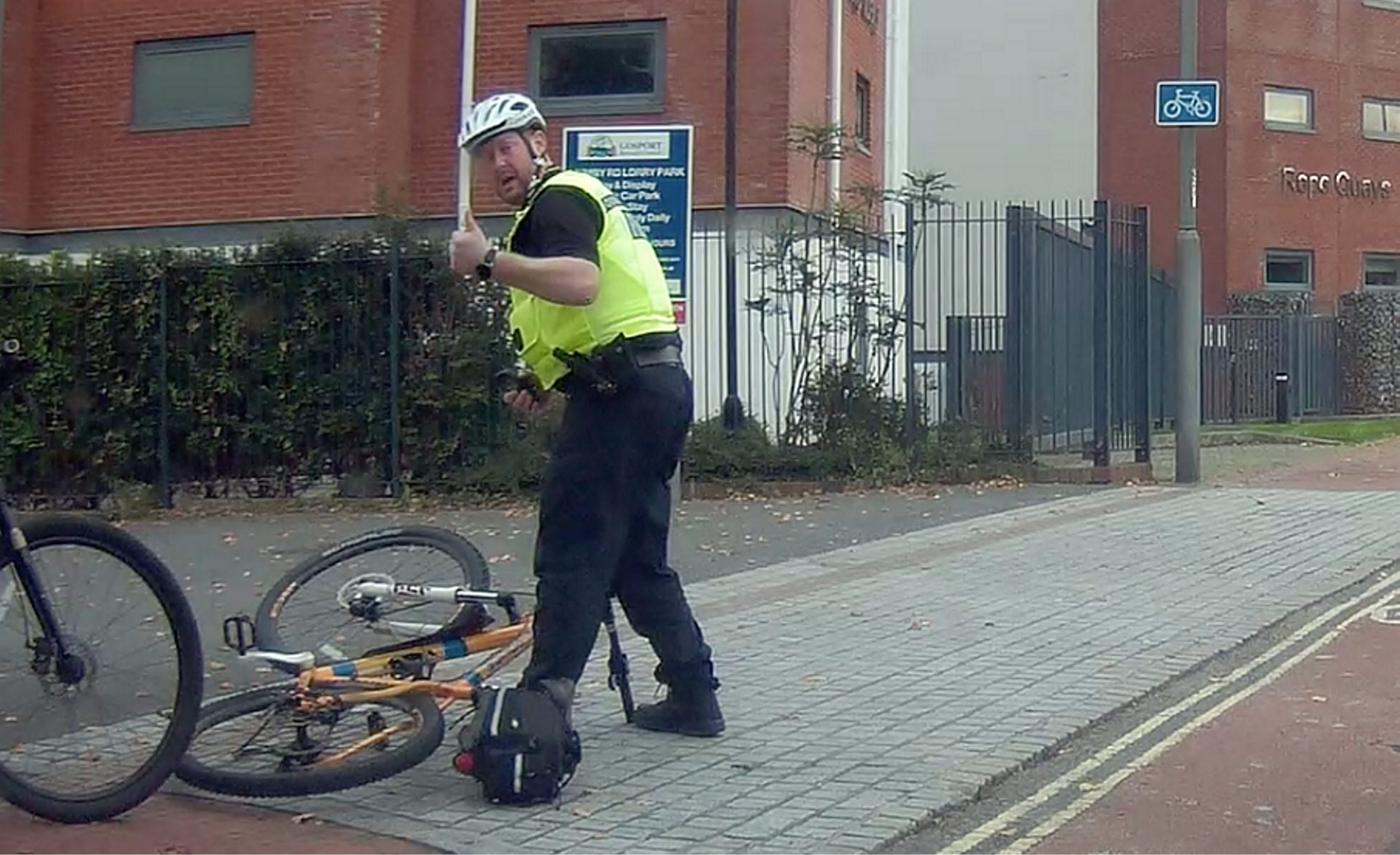 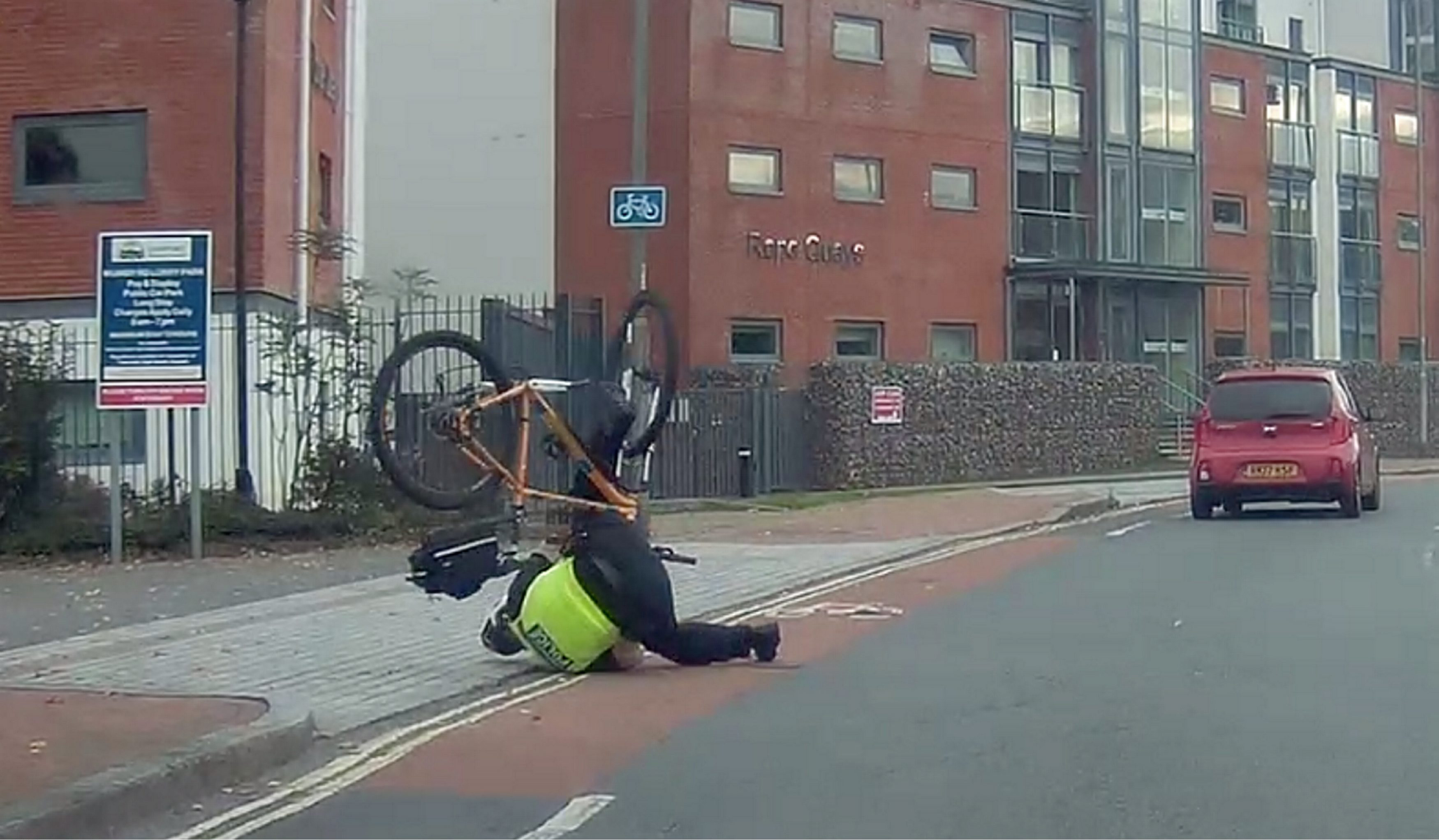 Scott Disick on Younes Bendjima: I Freakin’ Hate That Guy!

Goldie apologises outside court after he’s fined for attacking bouncer