There’s more evidence that the economic narrative could be undergoing a major shift.

For months, we’ve been living in an economy in which strong demand has been met with lagging supply, causing inflation inflation to surge. We now appear to be shifting to a phase where demand growth is cooling and supply chains are easing, which should cause inflation to come down.

While the 0.3% growth rate represents a deceleration from the 1.1% rate in March, it’s the kind of slowing that’s welcome news for folks like the Federal Reserve, which is actively working to cool economic growth in its effort to bring down inflation.

“That is consistent with our view that economic activity is bending rather than breaking under the impact of higher rates,” Michael Pearce, senior U.S. economist for Capital Economics, said in a note on Wednesday.

Core capex growth represents a massive economic tailwind. And the fact that it continues to grow, albeit at a decelerating pace, is a good sign for economy-wide growth.

According to S&P Global Flash US Manufacturing PMI report released on Wednesday, these emerging economic trends have continued into May. Specifically, the composite output index fell to a four-month low of 53.8 in May. For this index, any reading above 50 signals growth, and so the declining number suggests growth is decelerating. 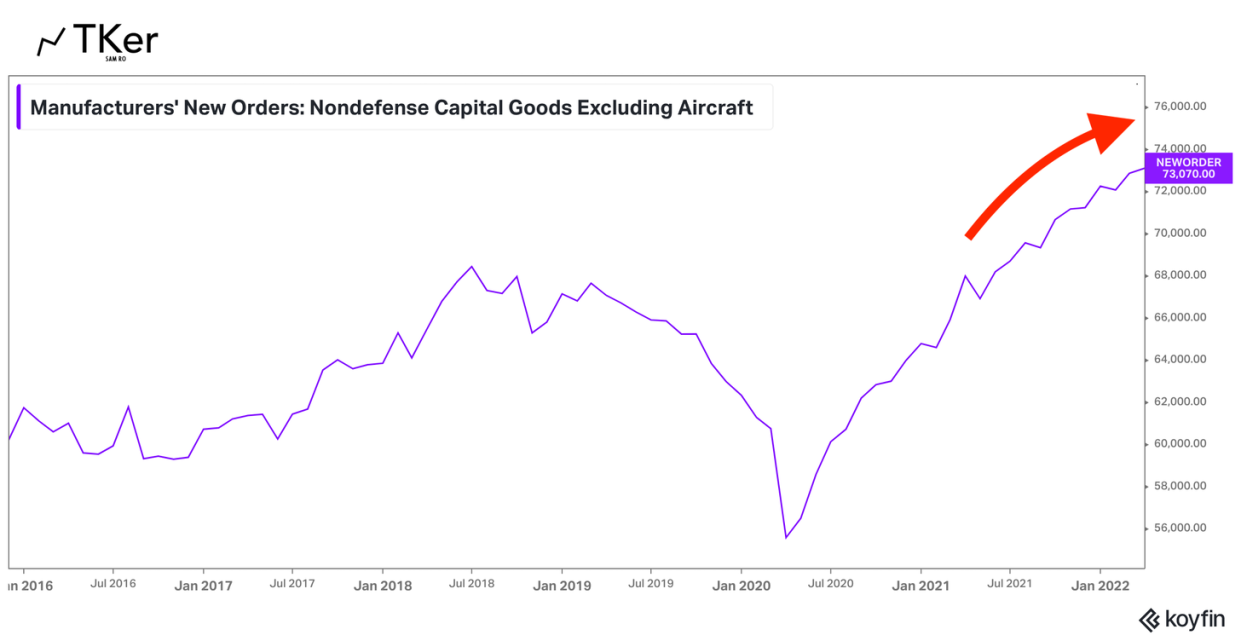 “Growth has slowed since peaking in March, most notably in the service sector, as pent up demand following the reopening of the economy after the Omicron wave shows signs of waning,” Chris Williamson, chief business economist at S&P Global Market Intelligence, wrote on Wednesday.

Growth appears to be cooling on the consumer front too.

According to a BEA report released Friday, personal consumption expenditures (i.e., consumer spending) increased by 0.9% in April from the prior month to new record levels. However, this was a healthy deceleration from March’s 1.4% growth rate. 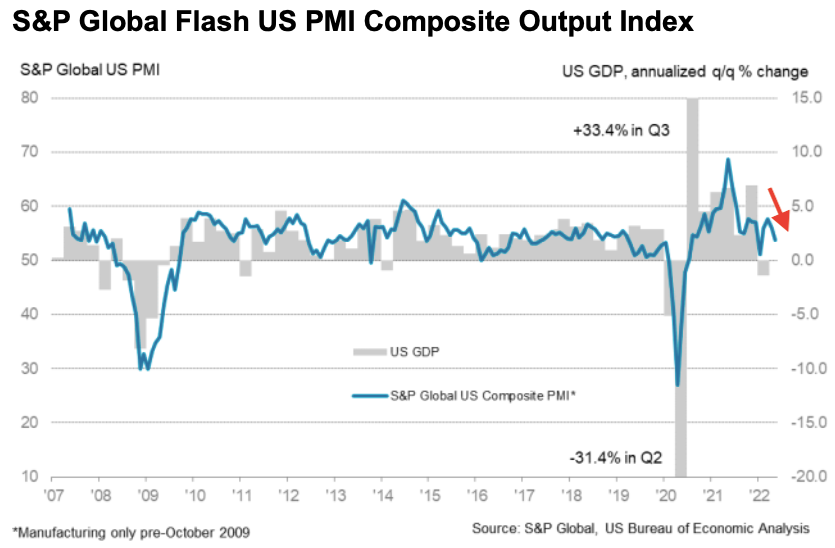 The spending came as the saving rate (i.e., the difference between income and spending) fell to its lowest level since September 2008.

While this development on its own is unsettling, it comes after consumers spent over two years accumulating over $2 trillion in excess savings.

“It looks like households have been eating into the ‘excess saving’ that was built up at earlier stages of the pandemic in order to fuel consumer spending in recent months,” Daniel Silver, economist at JPMorgan, wrote in a note on Friday.

As we’ve discussed frequently on TKer, these excess savings represent a massive economic tailwind. For a while, you could argue that it was exacerbating inflation. But now it appears to be bolstering spending as the economy slows. 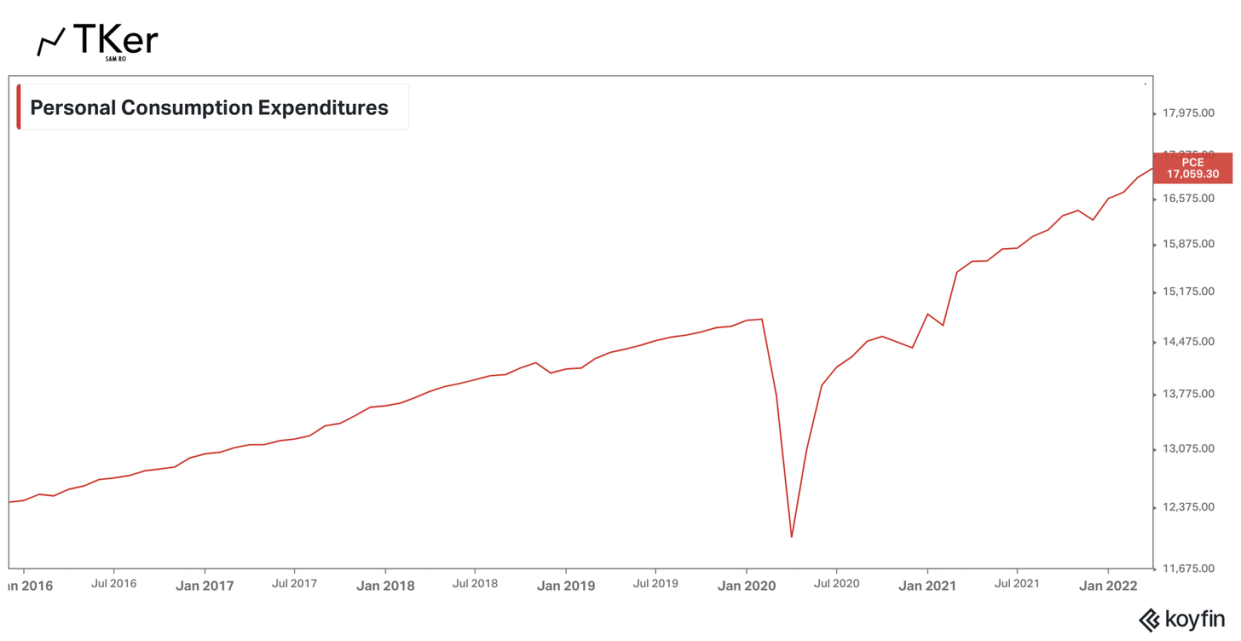 S&P’s PMI report also suggested there could be some daylight in the disrupted supply chains.

It’s also been a while since we’ve heard about ships idling outside of ports waiting to be unloaded.

“U.S. port data suggest easing backlogs,” JPMorgan economists wrote last week. “Notable examples are the ports of Los Angeles and Long Beach, which process about 40% of total imports into the US.” 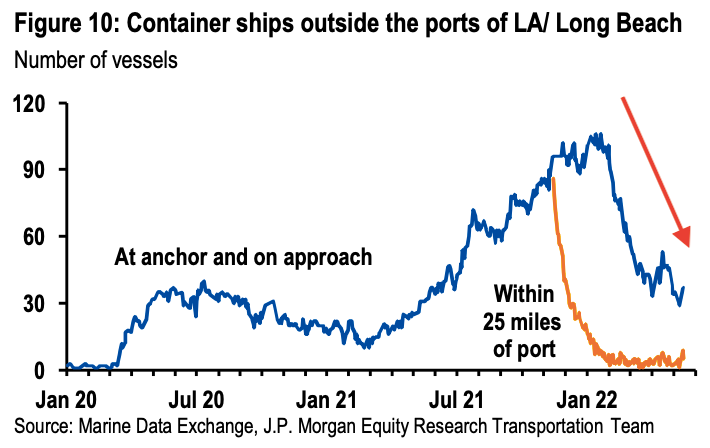 And it’s not just ocean freight that’s loosened. Trucking freight seems to be loosening too.

According to BofA’s Truck Shipper Survey for the week ending May 19, “shippers find it much easier to secure capacity (its highest level since June 2020).“ 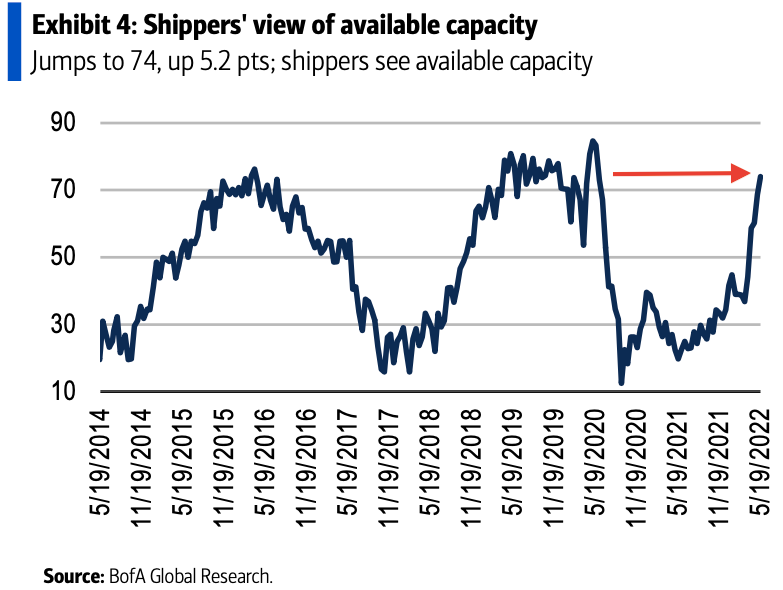 Unfortunately, at least some of these signs of loosening supply chains can be explained by easing demand for goods. But again, this is the dynamic that should make for easing inflation.

More signs that the labor market is cooling

Bloomberg reported that tech behemoth Microsoft was slowing hiring in its Windows, Office, and Teams businesses.

PayPal laid off 83 employees at its headquarters in San Jose.

These are anecdotes. But the developments are in line with the Fed’s aim of cooling inflation by first cooling the labor market.

Last month, I wrote about how economists across the board were saying that inflation — as measured by year-over-year increases in prices — had peaked.

On Friday, we got more evidence to confirm that may be the case.

The core PCE price index — the Fed’s preferred measure of inflation — climbed 4.9% in April from a year ago. This is down from the 5.2% rate in March and the 5.3% peak rate in February. 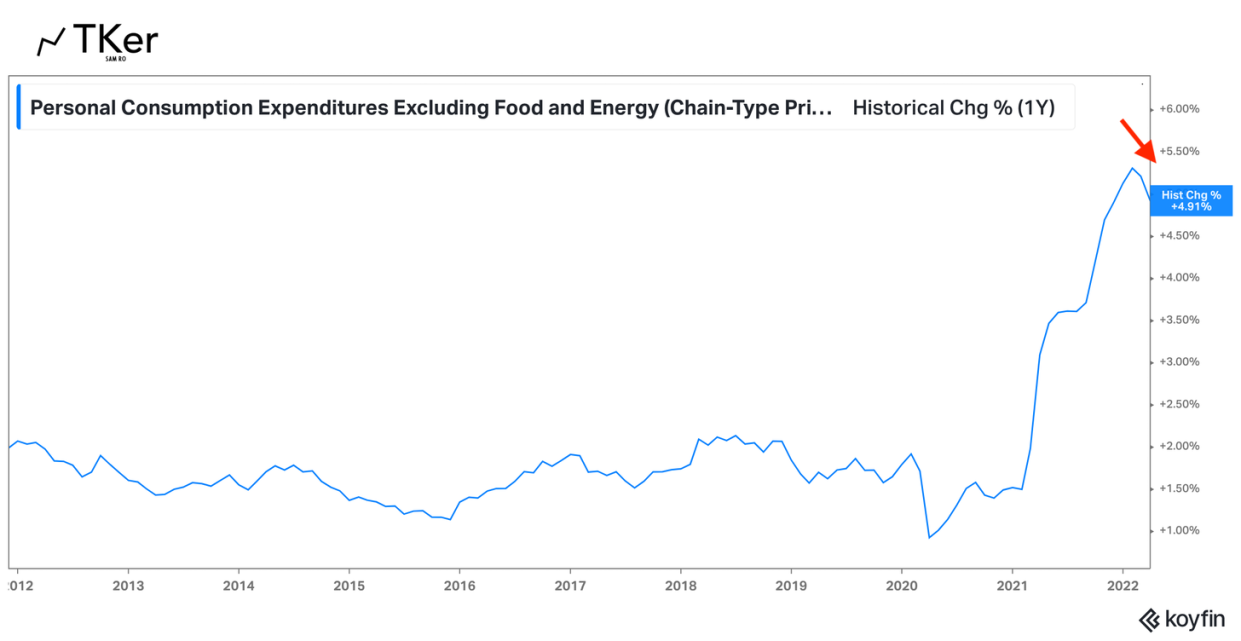 On a month-over-month basis, the core PCE price index has climbed by a cool 0.3% over the past three months.

It’s still too early to claim victory on inflation

“Many have touted March as the peak in inflation and are looking for inflation to cool from here,” Grant Thornton Chief Economist Diane Swonk said on Friday.. “We are not as convinced given the risks we still face due to the war in Ukraine and lockdowns in China. Either way, it is important to note that any cooling we see will have a high floor. Both the overall and core PCE indices remain well above the Federal Reserve’s 2% target.”

And so, we’ll have to keep an eye on the incoming data to see if a major shift in the economic narrative is indeed underway. 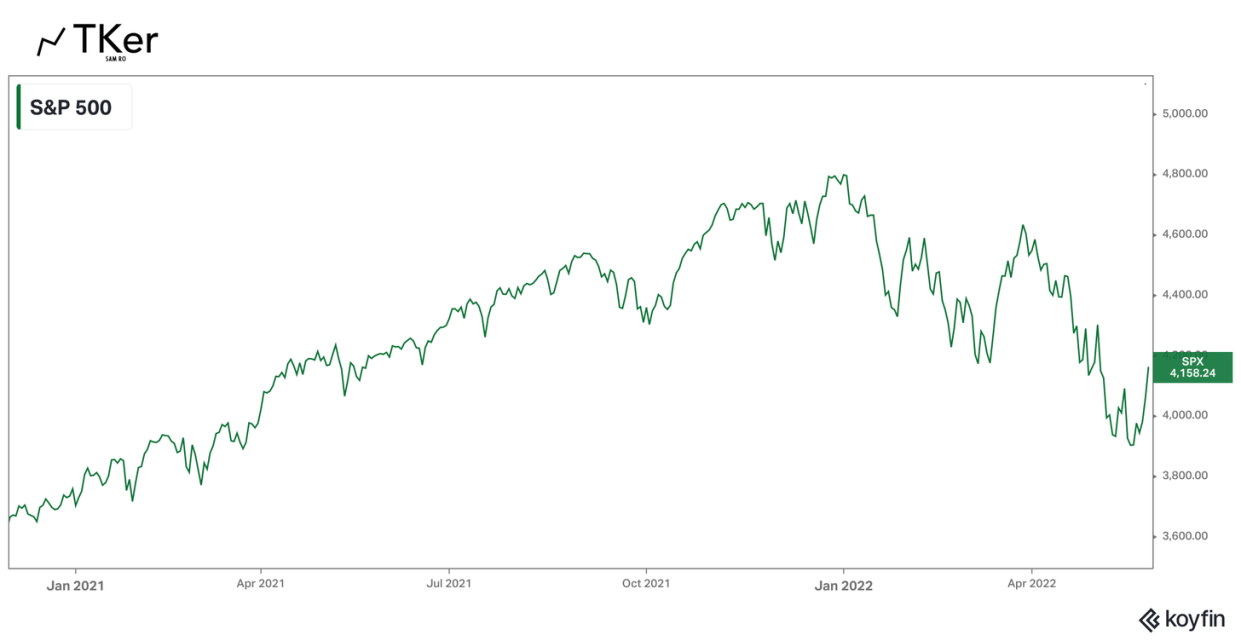 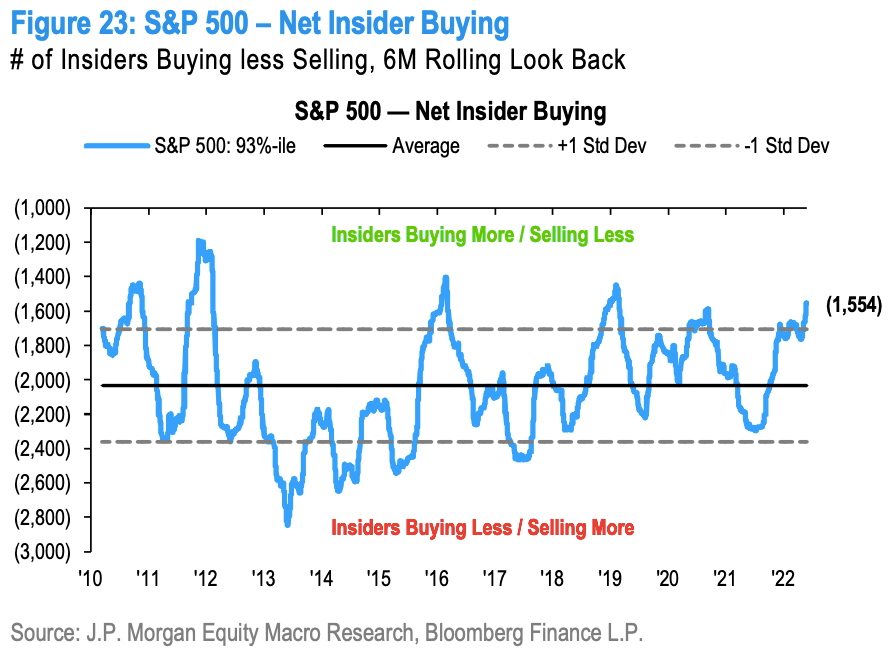 📈 Mortgage rates are still high, but tick down: The average rate for the 30-year fixed rate mortgage declined to 5.10% from 5.25% the week prior. Here’s Freddie Mac: “Mortgage rates decreased for the second week in a row due to multiple headwinds facing the economy. Despite the recent moderation in rates, the housing market has clearly slowed, and the deceleration is spreading to other segments of the economy, such as consumer spending on durable goods.“ 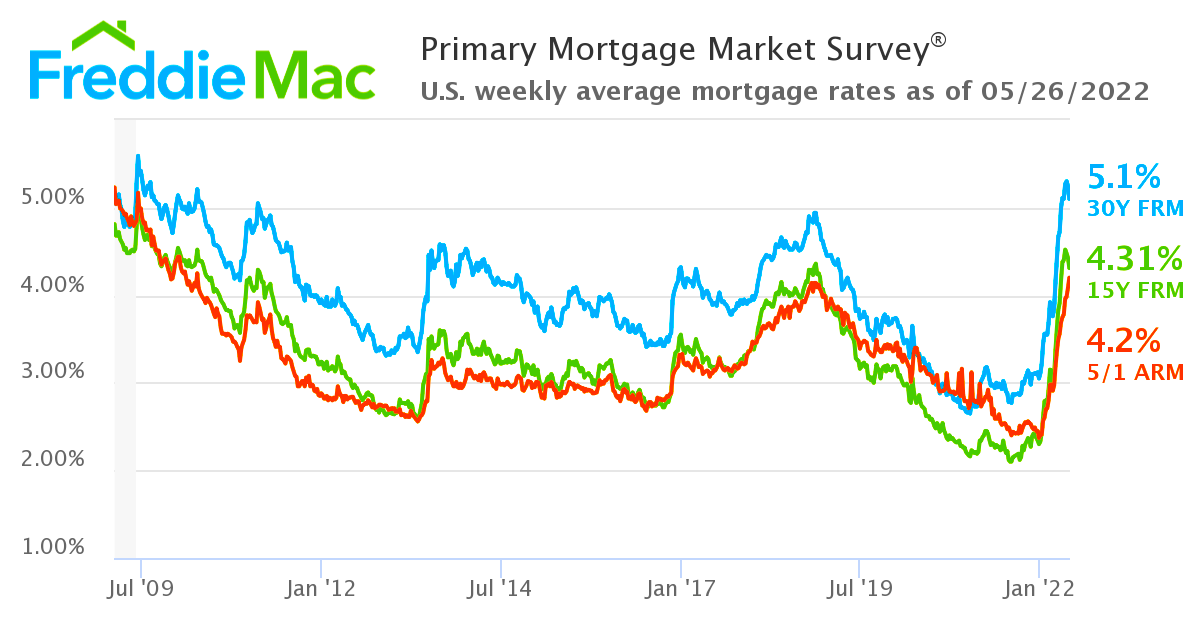 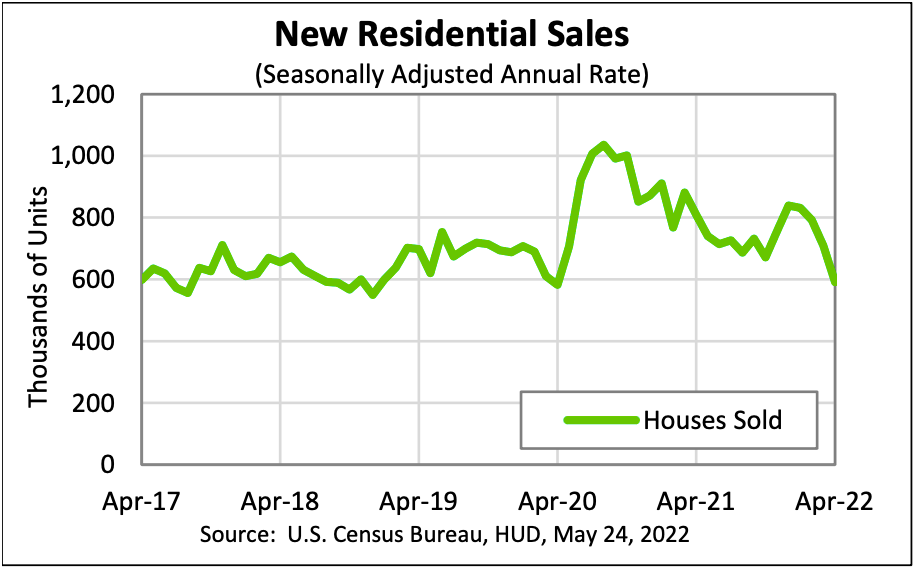 😤 Consumer sentiment tumbles: The University of Michigan’s index of consumer sentiment fell to 58.4 in May, its lowest level since August 2011. From the survey: “This recent drop was largely driven by continued negative views on current buying conditions for houses and durables, as well as consumers’ future outlook for the economy, primarily due to concerns over inflation.“ 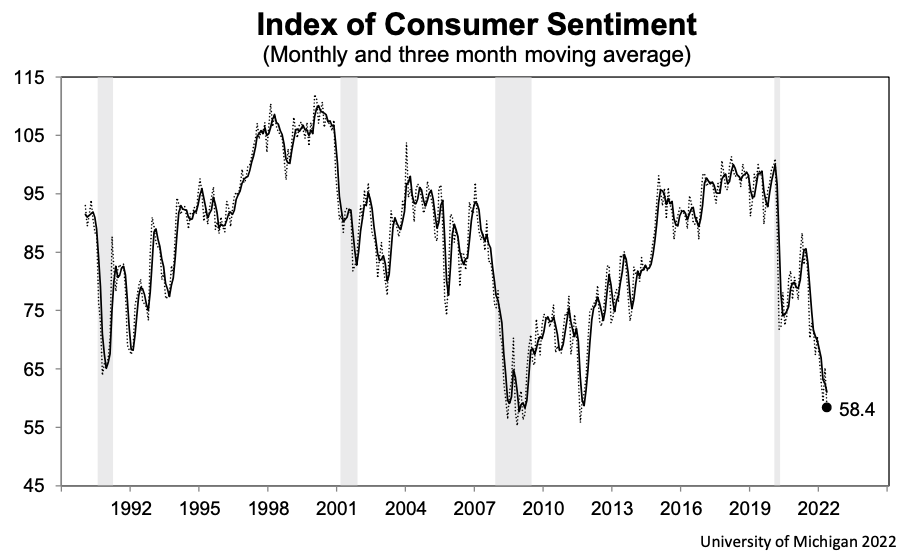 Keep in mind that deteriorating sentiment hasn’t come with a decline in spending in recent months. For more on sentiment, read this.

This follows a similar announcement from United Airlines last week. Altogether, it’s apparent that people are refusing to put their lives on hold. 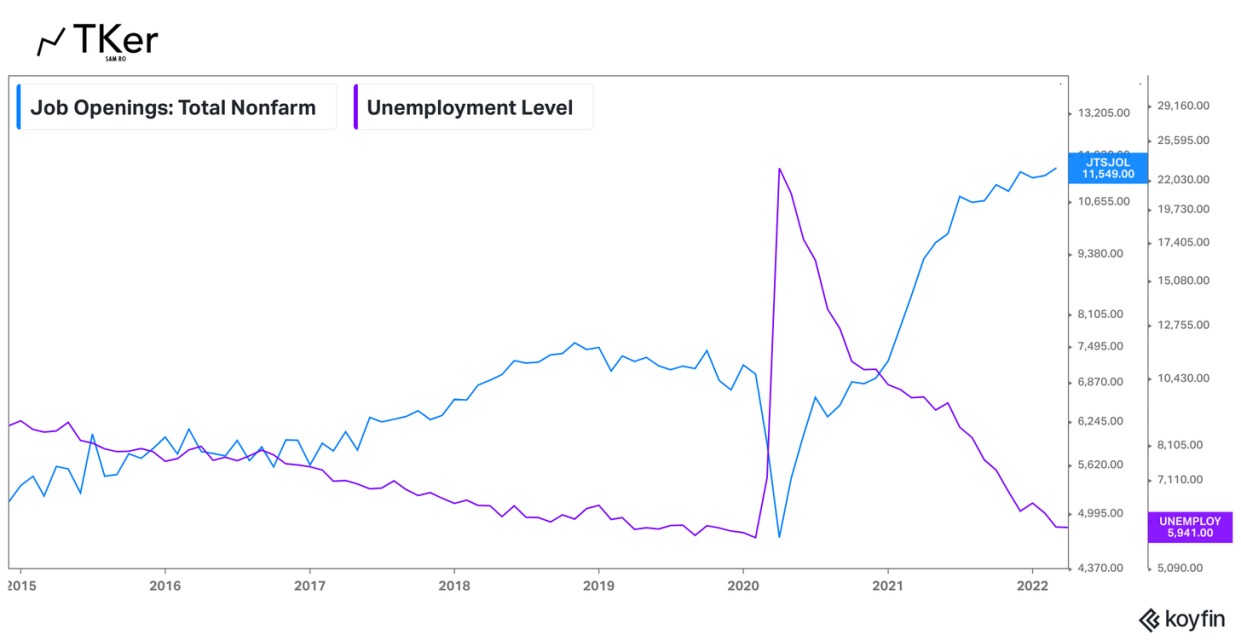 However, there are nearly two job openings per unemployed. This good news is being blamed for high inflation, which is bad, which is what the Fed is aiming to address with tighter monetary policy.

U.S. financial markets will be closed on Monday for Memorial Day.

Jennifer Lopez, Alex Rodriguez shared electric moment together when they were both still married

Billionaire John Paulson Ran Off With A Young Fitness Influencer – And His Wife Had To Learn About It On The Internet!