A Porsche driver who filmed four police officers as they lay dying after a horrific crash has been jailed for 10 months.

Richard Pusey pleaded guilty to a rare charge of outraging public decency and other offences after filming the crash on the Eastern Freeway in the Australian city of Melbourne on 22 April last year.

But, having spent 296 days in custody, his sentence could be complete within days.

Pusey, a mortgage broker and property developer, had been pulled over for driving at 149kmph (92mph) and the officers had been discussing impounding his vehicle when they were hit by a truck.

Pusey, who had MDMA and cannabis in his system, had been urinating on the side of the road when the truck, driven by Mohinder Singh, drove into the emergency lane – and the officers and their vehicles – at 5.36pm.

Pusey recorded two videos at the scene, a total of three minutes and eight seconds.

He zoomed in on the officers’ injuries and damaged cars, saying while filming a police car: “That is f***ing justice. Absolutely amazing, that is f***ing amazing.”

Prosecutors accepted he was not taunting the officers but they said he had refused requests to help the injured and to stop filming. He told police the next day that he was ashamed of the videos and that he said offensive things because “that’s how s**t comes out of my head”.

In comments reported by Melbourne newspaper The Age, County Court judge Trevor Wraight said Pusey’s words and actions had been “not only derogatory and horrible…but also callous and reprehensible conduct”.

The judge noted Pusey’s personality disorders and shock at what he had seen, but said the man’s actions were a long way from what would be considered normal: calling for emergency services and trying to help the dying officers.

He added: “Your conduct…was heartless, cruel and disgraceful.” 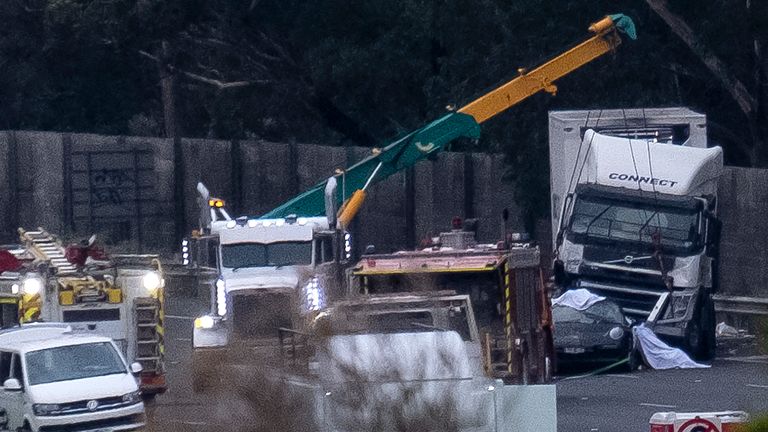 The other charges admitted by Pusey were speeding, possessing a drug of dependence, and reckless conduct endangering serious injury – related to him speeding on the same road a month earlier.

His lawyer Dermot Dann QC had suggested a good behaviour bond as punishment, citing time already served, the guilty plea, mental health problems, and the condemnation he had received from the media and the public.

The judge had said last month that Pusey was “probably the most hated man in Australia”.

His driving licence was also suspended for two years.

The truck driver, Singh, who was impaired by fatigue and drugs, was jailed for 22 years after admitting four charges of culpable driving causing death among other offences.

Abu Hamza suing US authorities over 'cruel and degrading' conditions

The Real Reason Prince Philip Will Not Lie In State

How Far From the Throne Are Princess Beatrice and Princess Eugenie?

Hallmark Channel Is Running a Christmas Movie Marathon in March