A mother was told the horrific news that her newborn baby could ‘drown from the inside out’ just by breastfeeding after he became only the second person in the country to be diagnosed with a super rare kidney disorder.

Little Jack Humphreys, now two, was born a healthy baby, but when midwives noticed he wasn’t putting on weight and was extremely pale, he was taken to hospital by parents Louise, 30, and Nick, 31, from Leeds.

The baby baffled doctors at Leeds General Infirmary, who found his sodium levels were the lowest they had ever seen and his blood was abnormal because it appeared to be retaining too much fluid – with Louise actually accidentally making her son worse when he drank her breast milk.

After eight weeks in hospital in November 2017, at just 11 weeks old, Jack was eventually diagnosed with Nephrogenic Syndrome of Inappropriate Antidiuresis (NSIAD), a genetic condition thought to affect just 40 people across the globe, at odds of more than one in a 100 billion. 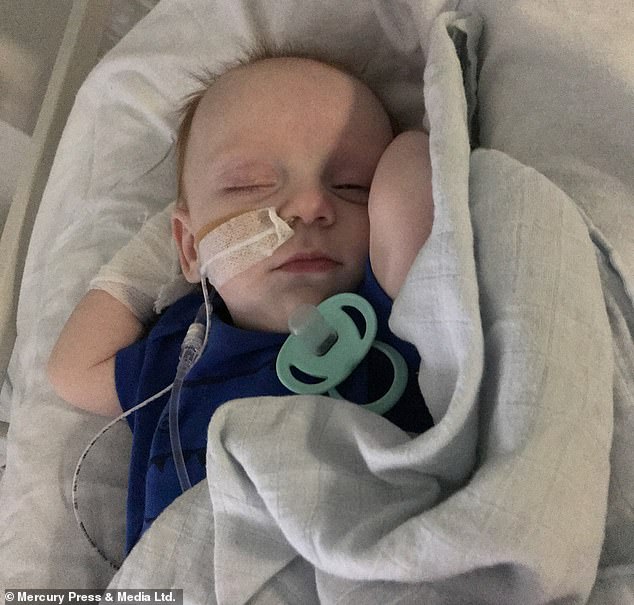 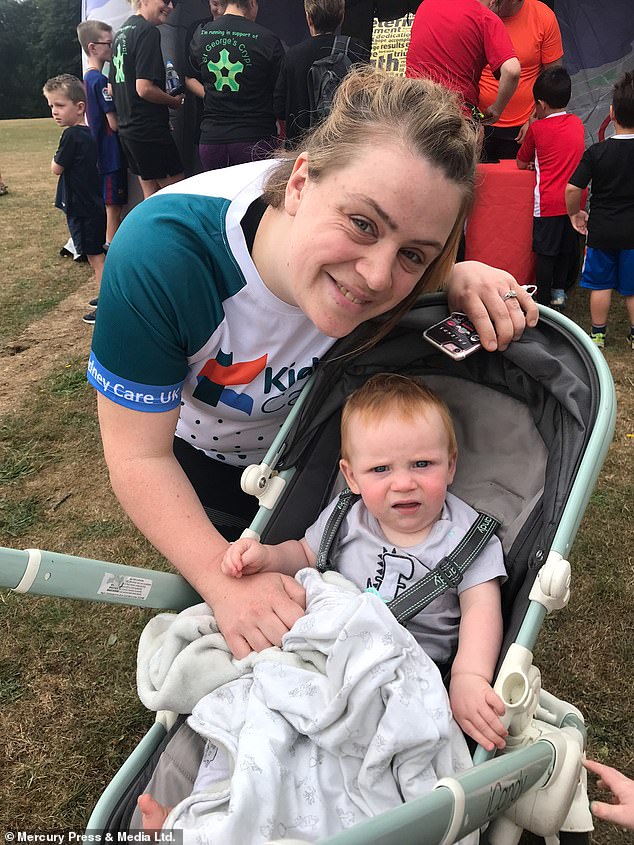 Mother Louise (left), with Jack, was told that breastfeeding him could cause him to ‘drown from the inside out’ due to the disorder, which is thought to affect just 40 people across the globe

The youngster’s kidney receptors are overactive, meaning he retains too much water and if he goes over his 500ml daily food and drink fluid the sodium outside his cells is replaced with water to balance the levels, causing the cells to flood – leaving him at risk of seizures or death.

Despite this and never being able to have treats such as ice pops, Jack has no knowledge of his uniqueness and is able to live a happy and normal life with his parents, and siblings Niamh, five, and Olivia, nine.

Mum-of-three Louise said: ‘I had a normal pregnancy, and when Jack was born he was fine.

‘But when he was about four weeks old, our midwife was really concerned when she noticed he wasn’t putting any weight on, so she sent us to hospital.

‘His sodium levels were at 112 and doctors told us they’d never seen them that low before – we honestly didn’t know what was wrong with him.

‘He was really poorly from then on, his skin turned grey and he wasn’t putting any weight on, it just kept dropping and dropping.

‘We were worried the worst would happen, we didn’t know if he was going to survive because his sodium levels weren’t improving and you need them to be normal to grow and develop.

‘We had lots of different doctors from different teams saying it could be many different things – tests and scans came back fine but his blood had too much fluid in it and they didn’t know why.

‘We didn’t think he would ever get a diagnosis – the doctors were so baffled by it, it was hard. It took them eight weeks to find out what was wrong.

‘When Jack was officially diagnosed with NSIAD, despite how dangerous it can be, we were just happy we finally knew what it was. 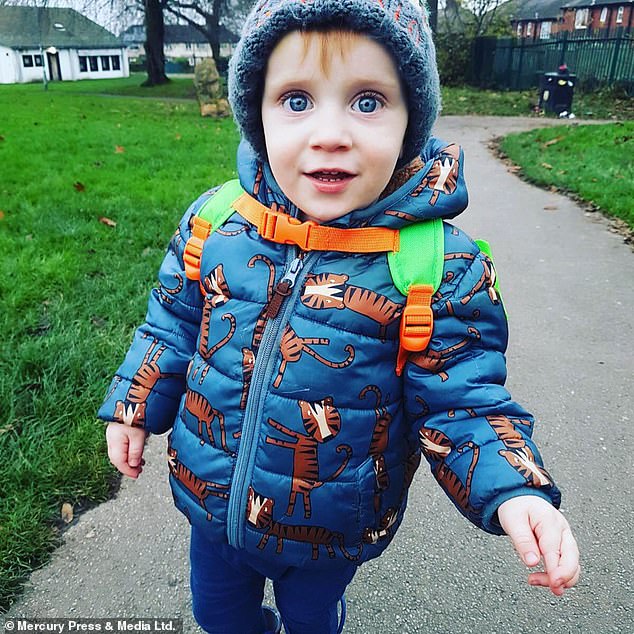 Jack, now two, is able to live a happy and normal life with his family in Leeds while his diet is closely monitored

‘We googled the condition and there wasn’t much about it because it’s so rare – it was quite shocking, we never thought something this rare could happen to us.

‘We thought it was going to be one in a million but there’s only between 40 and 60 people across the world who have it.

‘Now he can’t have more than 500ml of water a day, otherwise his sodium levels drop.

‘If he drinks too much water he could ‘drown’ from the inside out after having a seizure because the lack of sodium could lead to his cells flooding.

What is Nephrogenic Syndrome of Inappropriate Antidiuresis? Incredibly rare genetic disorder that only 40 people in the world have been diagnosed with

Nephrogenic Syndrome of Inappropriate Antidiuresis (NSIAD) is a rare genetic disorder of water balance, which means the kidneys retain too much water.

Those affected by the disease could suffer from seizures or even death if they surpass their daily intake of food and drink.

The genetic condition is thought to affect just 40 people across the globe, at odds of more than one in a 100 billion.

The disease is likely to present in early infancy, although some adults have been described with this disorder.

‘The doctors are never 100 per cent sure what exactly could happen if he goes over that limit – we’ve been told he could go into a coma.

‘When he was born and I was breastfeeding him, he was having too much fluid, so that’s why he wasn’t well at first.

‘I felt absolutely awful when I realised I was putting my son’s life at risk by breastfeeding.

‘It was so hard limiting his water when he was a baby too and he does get quite upset when he sees his sisters having something like an ice pop, which he can’t have.’

Doctors at Leeds General Infirmary at first doubted Jack’s diagnosis because the condition was so rare, they had never seen it before.

Genetic tests revealed Louise had been a carrier of the mutated gene which causes the condition, which only seems to affect males, and Jack’s young sisters may also be carriers.

Now, Jack’s condition can be managed with powdered medication which is mixed with his food four times a day, while his family also strictly limit his daily fluid intake in food and drinks to just 500ml.

Jack has to be extra careful on hot days because he can get dehydrated, and he had to get his doctor’s written approval to go on holiday to Gran Canaria for the first time last March.

Louise said: ‘Jack’s sodium levels were normal within weeks of starting a medication called Urea – it was like magic and we were amazed that this little powder could help him.

‘Jack’s consultant is amazing – he’s in contact with the doctor of the only other child in the UK that has this condition, to get lots of advice.’

Jack now lives a happy and normal life, and has blood tests every six to eight weeks to check his sodium levels are in the normal range.

Medics are unsure of how his condition will affect him as he gets older, but they may eventually be able to lower his doses of medication as he grows.

His parents are now speaking out to try and help spread awareness of NSIAD to others, in hopes of helping other families who might spot the same symptoms in their baby.

Louise added: ‘Thinking back, it was hard being in the hospital – I don’t know how we got through it.

‘Our family were amazing though, and we’re so thankful for the NHS for what they do for Jack.

‘The doctors have said Jack will always have it for the rest of his life because it is genetic so he will never grow out of it.

‘My daughters know Jack is a bit more special than other children but they’re really loving and it doesn’t faze them.

‘Nick was baffled when we were in hospital but he does really well with it now and we support each other.

‘Jack is really happy – looking at him you wouldn’t think he’s got such an incredibly rare condition at all!’