‘I’m not going to make it, mum’: Mother of one of the TEN London transport workers to die from coronavirus reveals his heartbreaking final words as families voice anger at lack of protective equipment

The grieving mother of a London bus driver who died scared and alone with coronavirus has revealed her son’s heartbreaking final words as ‘I’m not going to make it, mum.’

Emeka Nyack, 36, who drove the number four bus from Blackfriars to Archway succumbed to the disease at the end of March after fighting it for two weeks.

His mother Anne said Mr Nyack, a father-of-one, had stayed at home as much as possible to try to avoid coronavirus, but was worried about the lack of protection he was given while driving.

Crushed that she was not able to say goodbye after paramedics ordered her to leave the room, Mrs Nyack recalled the last words her fearful son said to her were pre-empting his own death.

Describing the horrific final moments, Mrs Nyack said: ‘My son sat on the floor and was in a really bad way.

‘He was really scared and breathing fast. I held his head in my hands and he kept asking when the ambulance would be there.

‘Then the medics arrived and they told me to leave the room. That’s the last time I saw him.’

Mr Nyack is one of 10 London Transport workers who Mayor Sadiq Khan announced had died with coronavirus.

Mrs Nyack launched a stinging attack on City Hall for failing to provide adequate protection equipment to insulate workers from the disease. 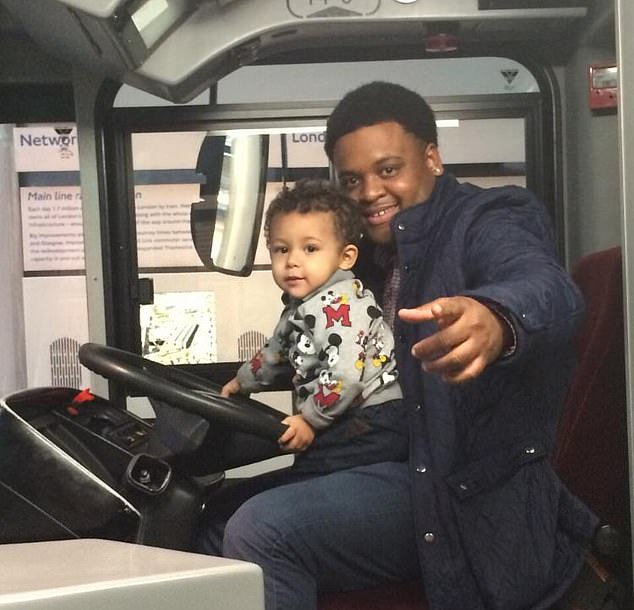 Emeka Nyack, 36, sits in the cab of a bus with his son, Makiah, who is now seven years old 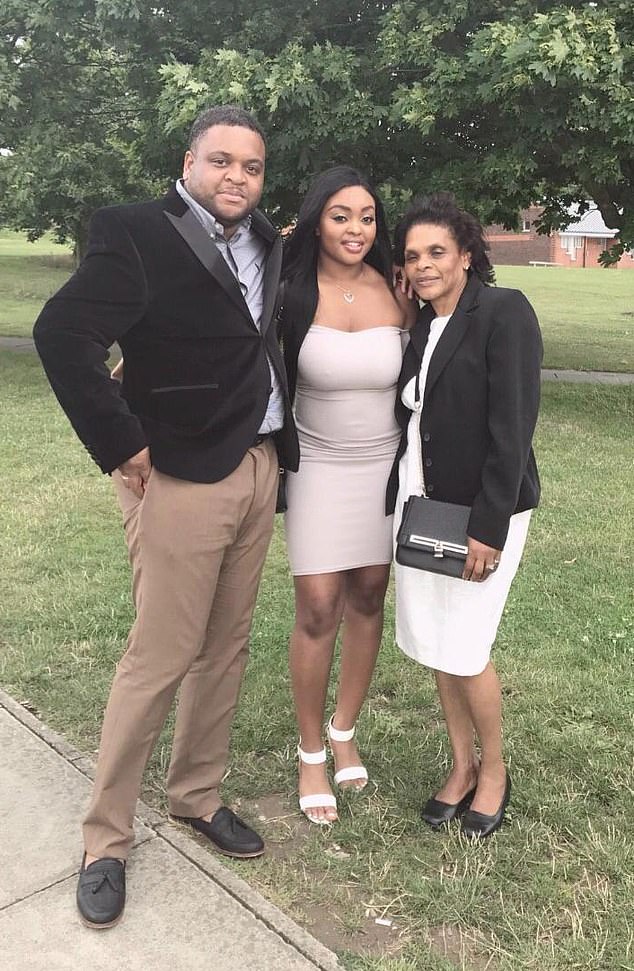 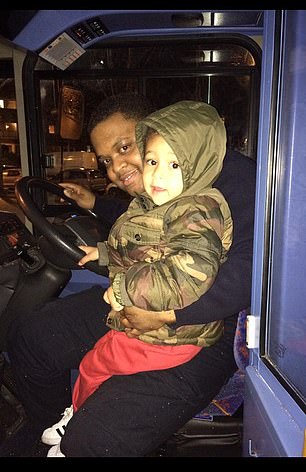 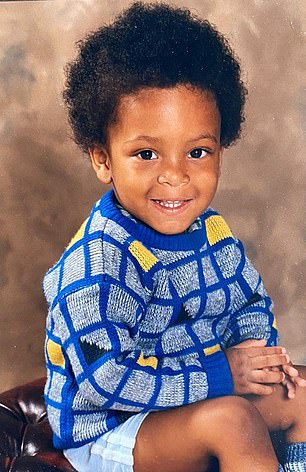 Mr Nyack sits on a bus with his son, left, and is himself pictured as a child, right 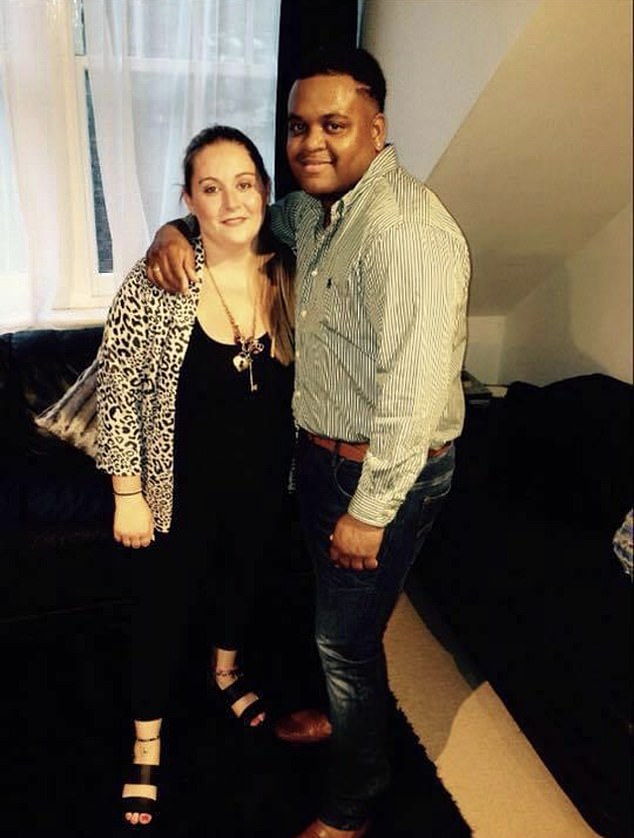 She said: ‘Sadiq Khan should have protected my son. I hold him responsible for what happened,’ she said. ‘I want to state that quite clearly, in bold letters.

‘It’s just devastating that these drivers work so hard serving the public, taking NHS staff to work, and they are sent to risk their lives in dirty buses with no protection.

‘The mayor’s own father was a bus driver. I just don’t understand how he can fail to protect the people who keep our country going.’

Loved ones of other transport staff who have died also lined up to slam the lack of protective gear issued to essential workers.

London driver Nadir Nur, 48, was described by his widow Bishara Maye as a ‘dedicated, hardworking’ father who took his duty as an essential worker seriously, but she said he was not protected.

She said: ‘Nadir and his colleagues had no PPE whatsoever. They worked in the frontline without any protection from this aggressive deadly virus.

‘PPE should be made available for bus drivers who are putting their life at risk daily in order to put food on the table and pay bills.

‘Bus drivers are doing their part for the country, we should be protecting them.’

The Mayor acknowledged that these frontline workers had not been issued with PPE, and was following advice from Public Health England.

Before his death, Mr Nyack – who suffered from mild asthma – had told colleagues that he was worried about the poor hygiene on the buses and the lack of protection for staff.

Drivers were sent to work with no masks or gloves and the vehicles were not cleaned properly, he claimed.

Mrs Nyack, 62, said she wrote to her son’s employers, Metroline, last month, warning them of the danger and begging them to address these concerns. But although she received a supportive reply, no action was taken.

In an interview with MailOnline, she said: ‘My son didn’t go out anywhere that was risky. He just went from home to work and back again. It was a mundane routine but he loved it, and did it in a professional way.

‘He didn’t choose to be out there risking his life like some idiots who ignore the warnings. He was doing the job he loved to help the country get through this.’

She said the family had been desperate to stay with him in his last moments, but were not allowed.

‘He died on his own, with nobody to hold his hand,’ she said. ‘When he collapsed the paramedics threw us out of the room, we weren’t even able to say goodbye. My son’s not going to have parents’ evening any more. It’s just so sad.’ 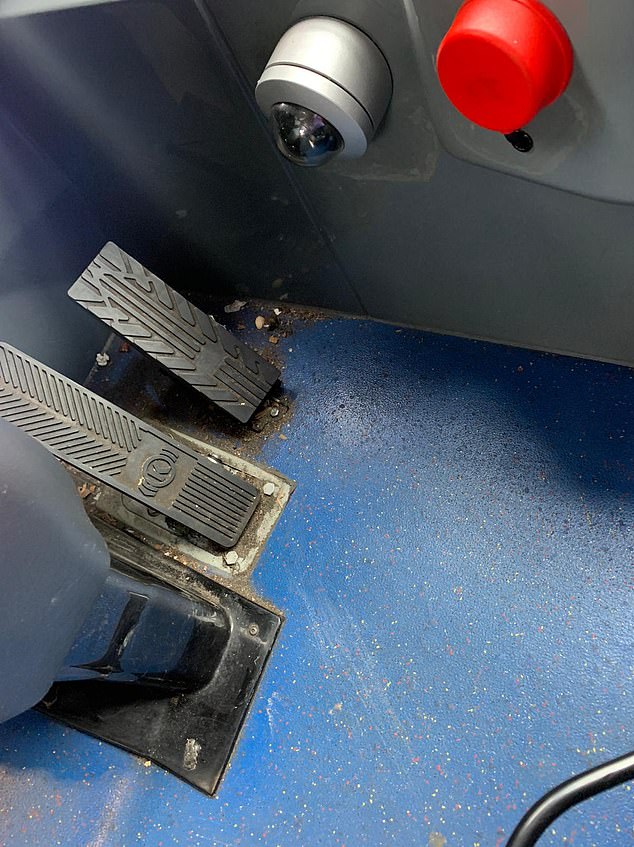 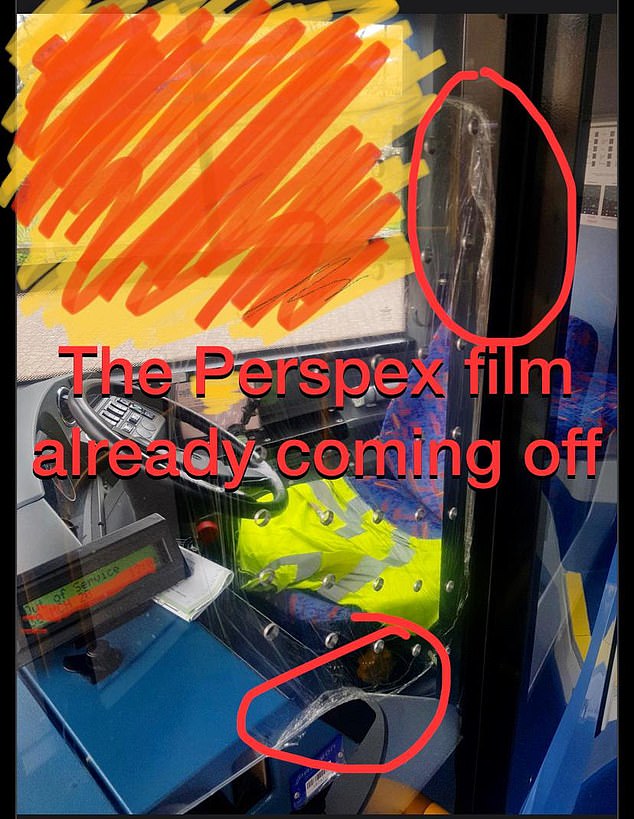 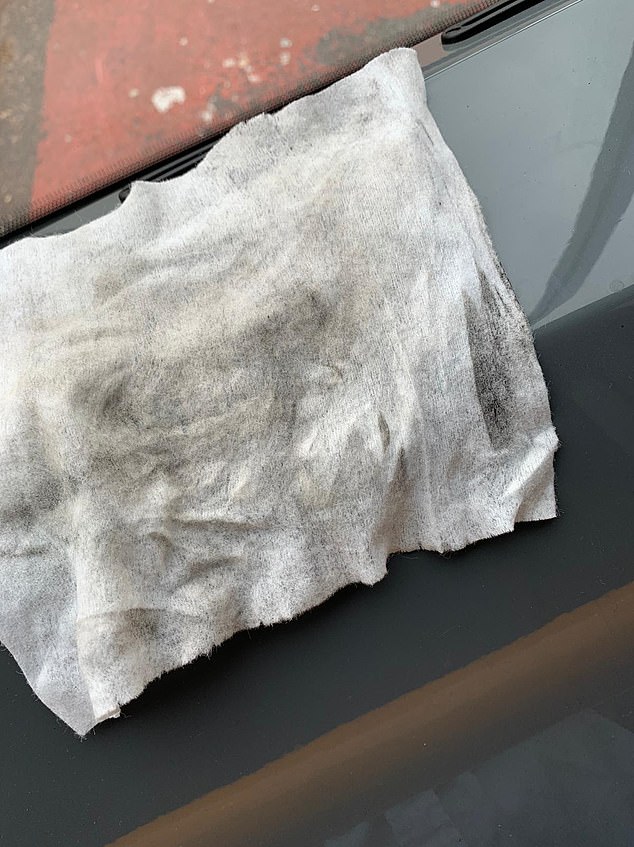 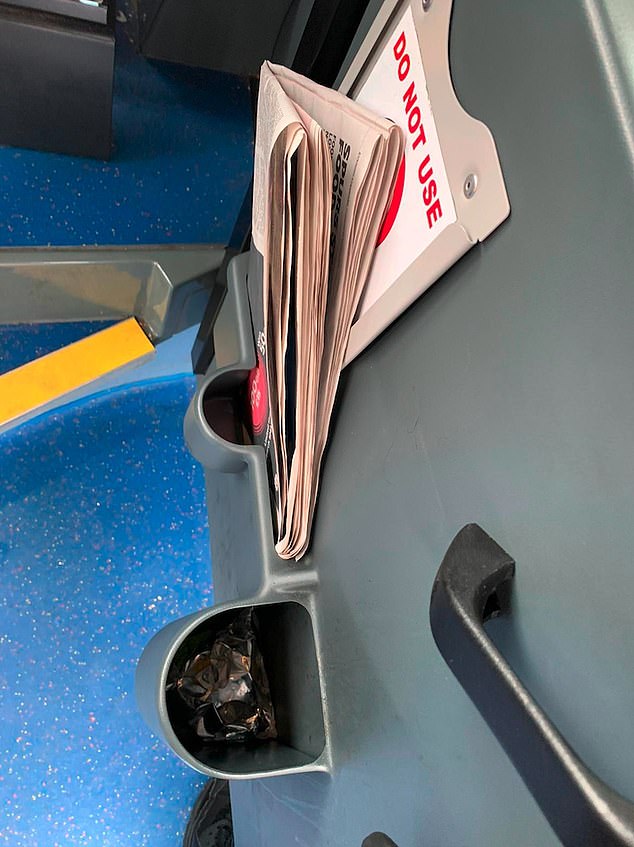 A driver has shared with MailOnline a photograph of rubbish left on buses inside sticky receptacles, allegedly due to inadequate cleaning

Mr Nyack was rushed to hospital last month with coronavirus and put into an induced coma. He appeared to recover and was released to recuperate at home, but collapsed and died on Saturday.

Eight bus drivers have died of coronavirus so far in London, as well as another in Bristol.

The victims included Said Musse and garage supervisor Paul Aheto, both of whom were employed by Metroline, which has been criticised for its poor safety provisions.

Father-of-five Nadir Nur, 48, of HCT Group, who drove the 394 bus between Islington and Hackney, and Rodolfo Silva, who was employed by Go-Ahead London, were also among the dead.

A Metroline spokesman said that the holes in the screens around the driver’s cab had been covered with protective vinyl, making masks unnecessary.

But exclusive pictures obtained by MailOnline of another bus in the fleet showed the vinyl peeling off – though the holes were still covered – and buses’ floors, surfaces and rails thick with dust and dirt.

One driver working for Metroline, who asked to remain anonymous, said Mr Nyack would often complain about the risky state of his bus before he died.

‘He talked all the time about how the buses were not being cleaned and how there wasn’t even enough cleaning staff to get the job done,’ he told MailOnline. 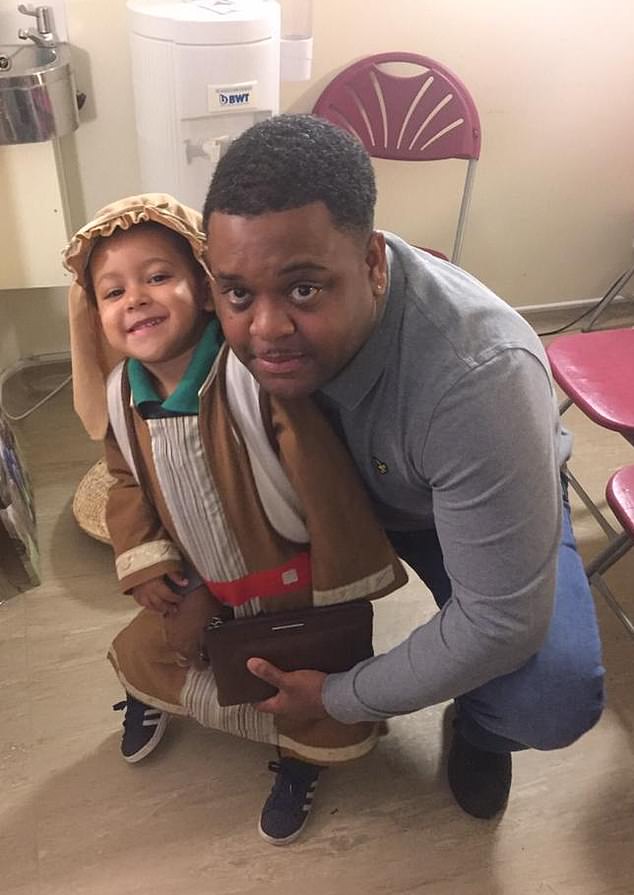 Mr Nyack, right, had loved buses and wanted to be a bus driver ever since he was a little boy 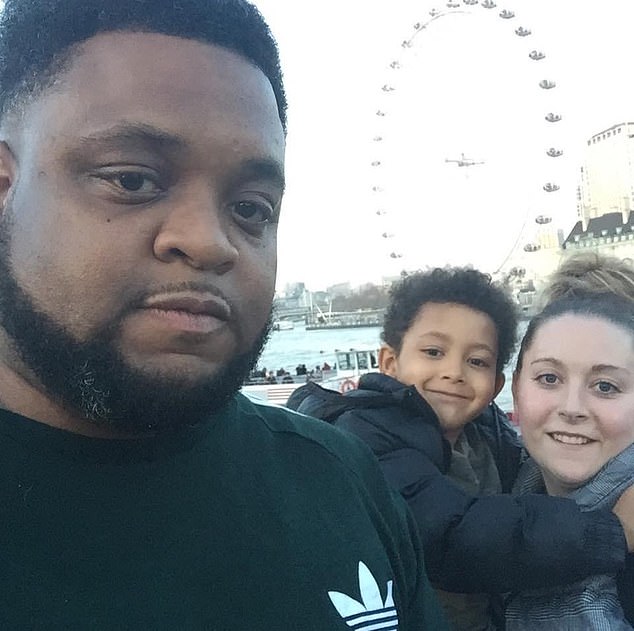 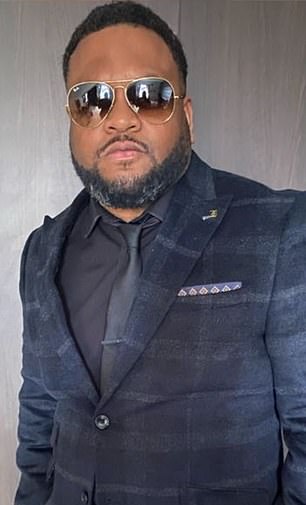 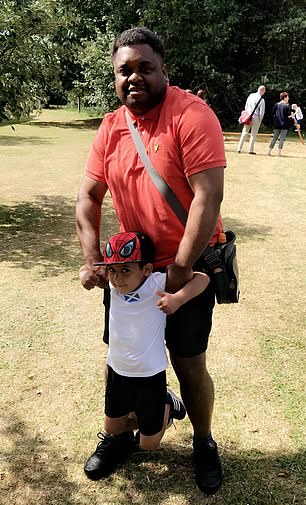 Before his death, Mr Nyack complained about dirty buses and inadequate safety equipment 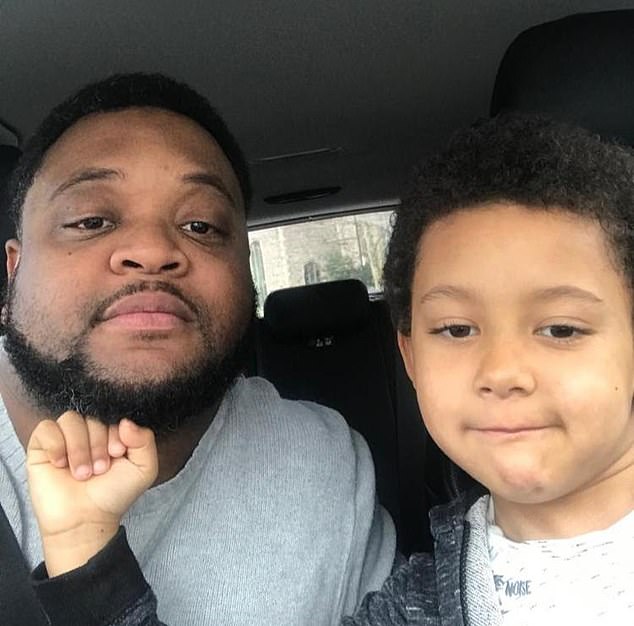 Mr Nyack, left, was so worried that his mother wrote to his bosses to cite safety concerns

‘Emeke used to say he thought bus drivers should be given masks and gloves, especially him as he was asthmatic. It would play on his mind a lot. And he was right.’

The hand sanitiser dispensers in the depot have been empty since February, the driver said, adding that he now washes the dirty bus himself before and after work.

A Metroline source acknowledged that the dispensers were empty, but said that this was due to nationwide shortages.

His partner Tamara Carrick, 30, who is mother to their seven-year-old son Makiah, said Mr Nyack was worried about money, so had gone to work even though he was concerned about covid-19.

‘He woke up with a temperature and said he felt a bit ill,’ she said. ‘In the next few days his temperature went up and down and he started to get really breathless.’

Mr Nyack was taken to Lister hospital in Stevenage on March 21. Hospital records reveal he was categorised as ‘high risk for covid-19 due to his occupation (London bus driver).’

Over the following days his condition worsened, and on the 24th he was placed in an induced coma. Three days later he seemed to recover and was discharged from hospital.

‘He was doing fine,’ Ms Carrick recalled. ‘Last Saturday, four days after he was discharged, he was having a bath and talking and chatting through the door. Then he suddenly felt light-headed and tired.

‘He went into the bedroom and lay on the bed, getting really worked up and scared. He said he needed to go back to hospital so an ambulance was called. 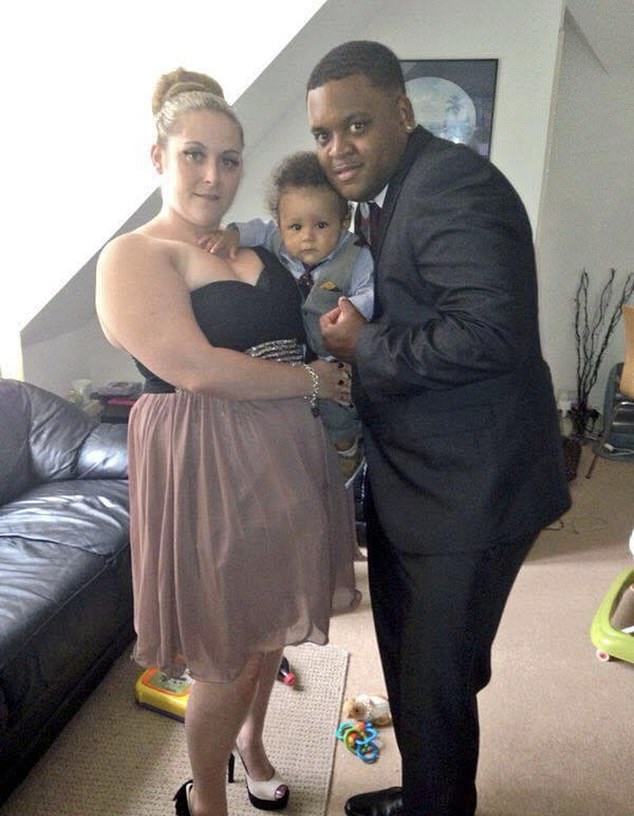 Mr Nyack, right, died four days after being discharged from hospital in Stevenage 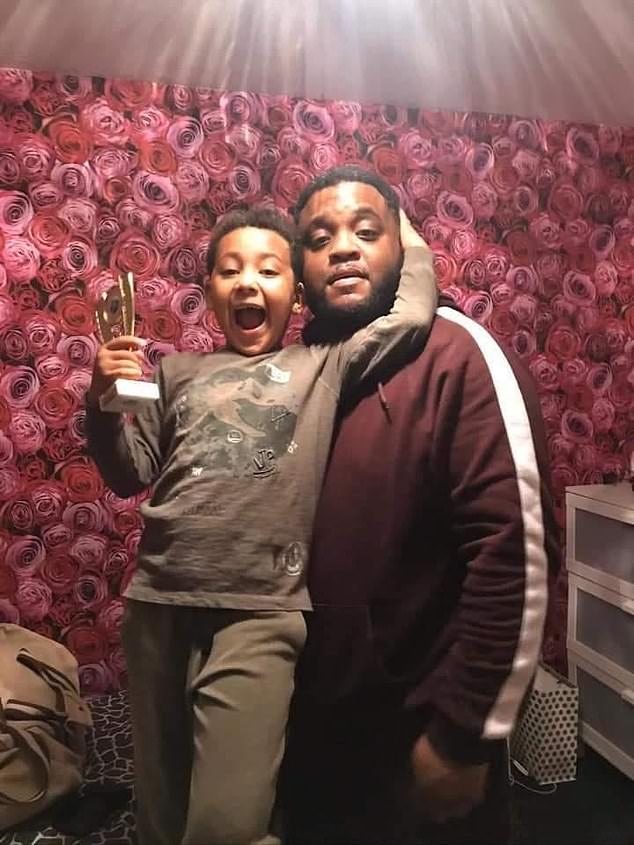 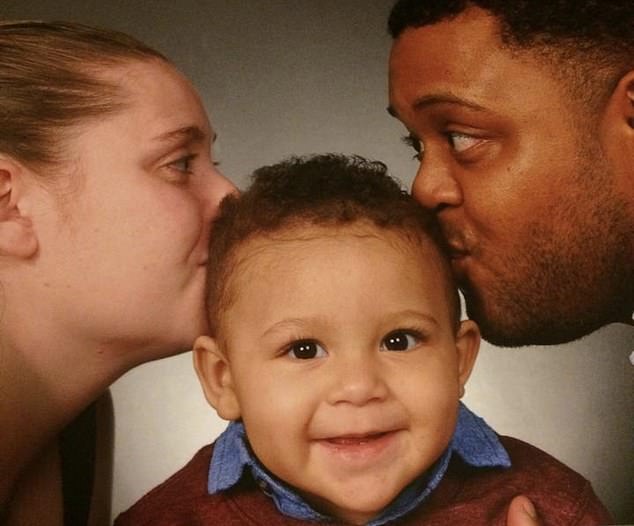 Paying tribute to her son, right, his mother Anne, 62, said: ‘He was doing the job he loved to help the country get through this’ 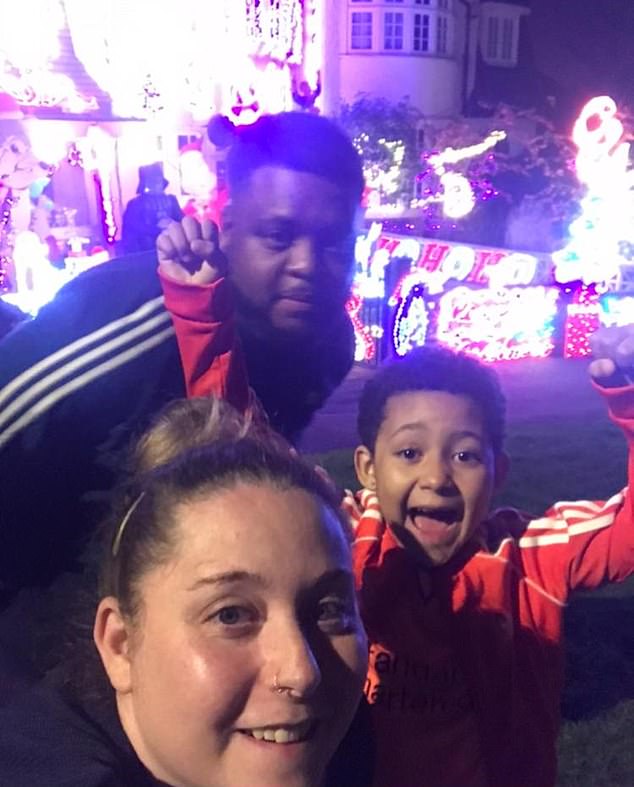 Mr Nyack, top, was one of eight London bus drivers to have died of coronavirus so far

‘The paramedics arrived and tried to calm him down and get his heart rate lower. Then he just collapsed and passed away.’

Paying tribute, the Mayor of London said he would write to the families of all TfL workers who lost their lives and insisted he was doing everything he could to keep driver safe.

‘I’m absolutely devastated to hear Emeka Nyack has lost his life after testing positive for coronavirus,’ he said. ‘My thoughts are with his loved ones at this awful time.

‘My top priority is keeping Londoners safe and City Hall and TfL are working with Unite the Union to do everything we can to protect bus workers and passengers, in line with PHE advice.

‘All drivers are shielded by a clear screen and TfL have enhanced cleaning, are stopping passengers from sitting near drivers and boosting social distancing at stations and stops.’

A Metroline spokesman also insisted safety was the company’s main priority and that all Public Health England (PHE) guidelines had been followed.

‘It is with immense sadness that we can confirm that 3 of our colleagues have passed away after contracting coronavirus,’ he said. ‘We are devastated by this loss and we offer our support and condolences to the families at this incredibly difficult time.

‘We continue to do everything we can to make sure our workforce is as protected and as safe as possible during this unprecedented time. The Department for Transport and Public Health England do not recommend the use of face masks for transport staff.

‘All of our vehicles are fitted with assault screens which are effective barriers against transmission. We have reinforced this screen as a barrier to viral transmission by applying vinyl to cover small holes that are present to aid communication between our drivers and passengers.’