Mother-of-one, 29, transforms her ‘timewarp’ 1960s kitchen for just £68 by using paint from Wilkos and items bought on eBay after she was left housebound for 10 days because the River Severn flooded

A woman left housebound for more than a week by flooding decided to transform her ‘time warp’ kitchen for just £68 – after being quoted more than £10,000 for a brand new one.

Sam Waters, 29, moved into her Shrewsbury home with husband Will, 30, and their three-year-old son Artie in August 2018, after scoring a good deal on the market because the previous owner hadn’t altered the property since it was built in the 1960s.

The couple got to work on redecorating their new home but were forced to put their dreams for an update to the ‘drab and dilapidated’ kitchen on hold when they were quoted between £7,000 and £10,000 to have this done professionally. 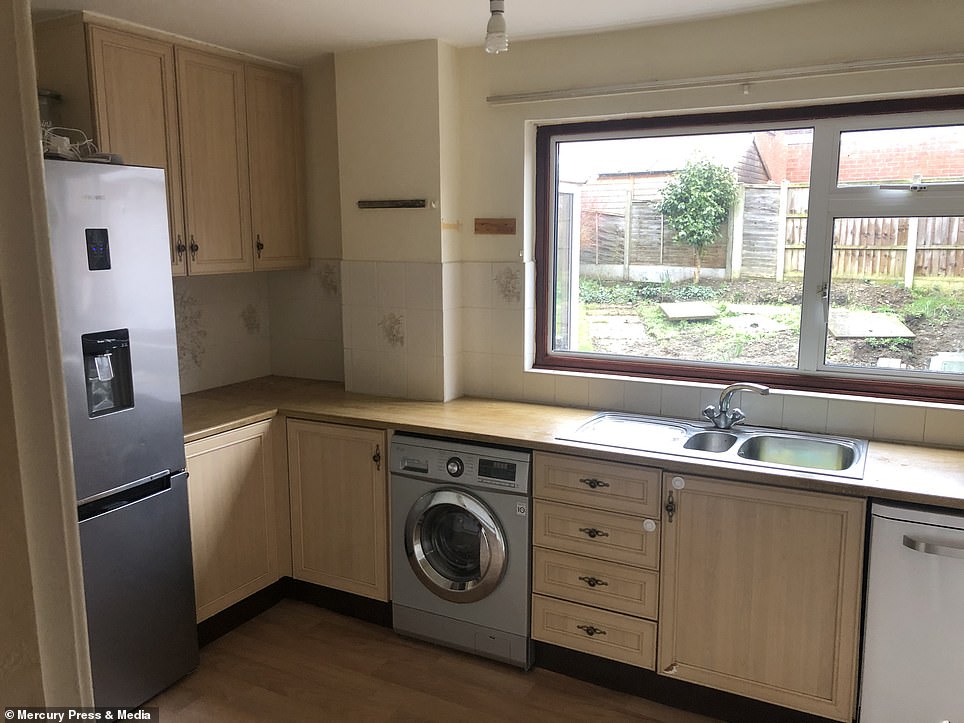 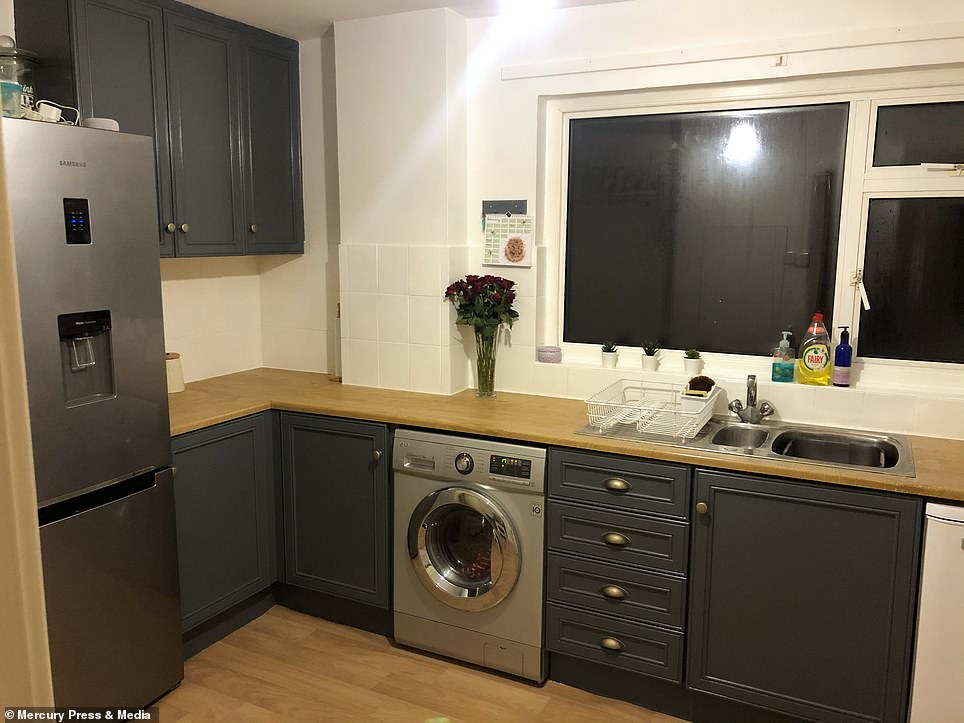 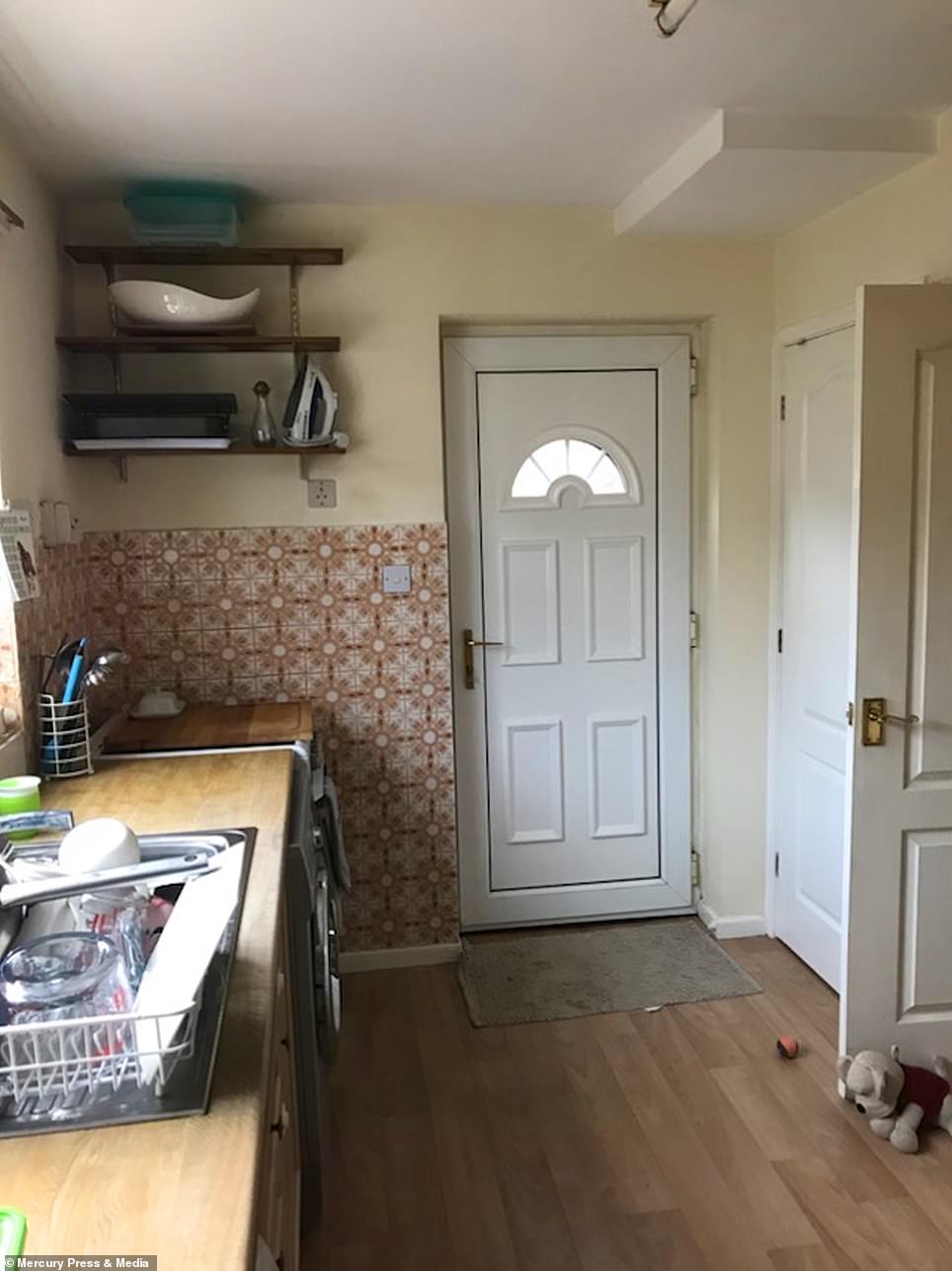 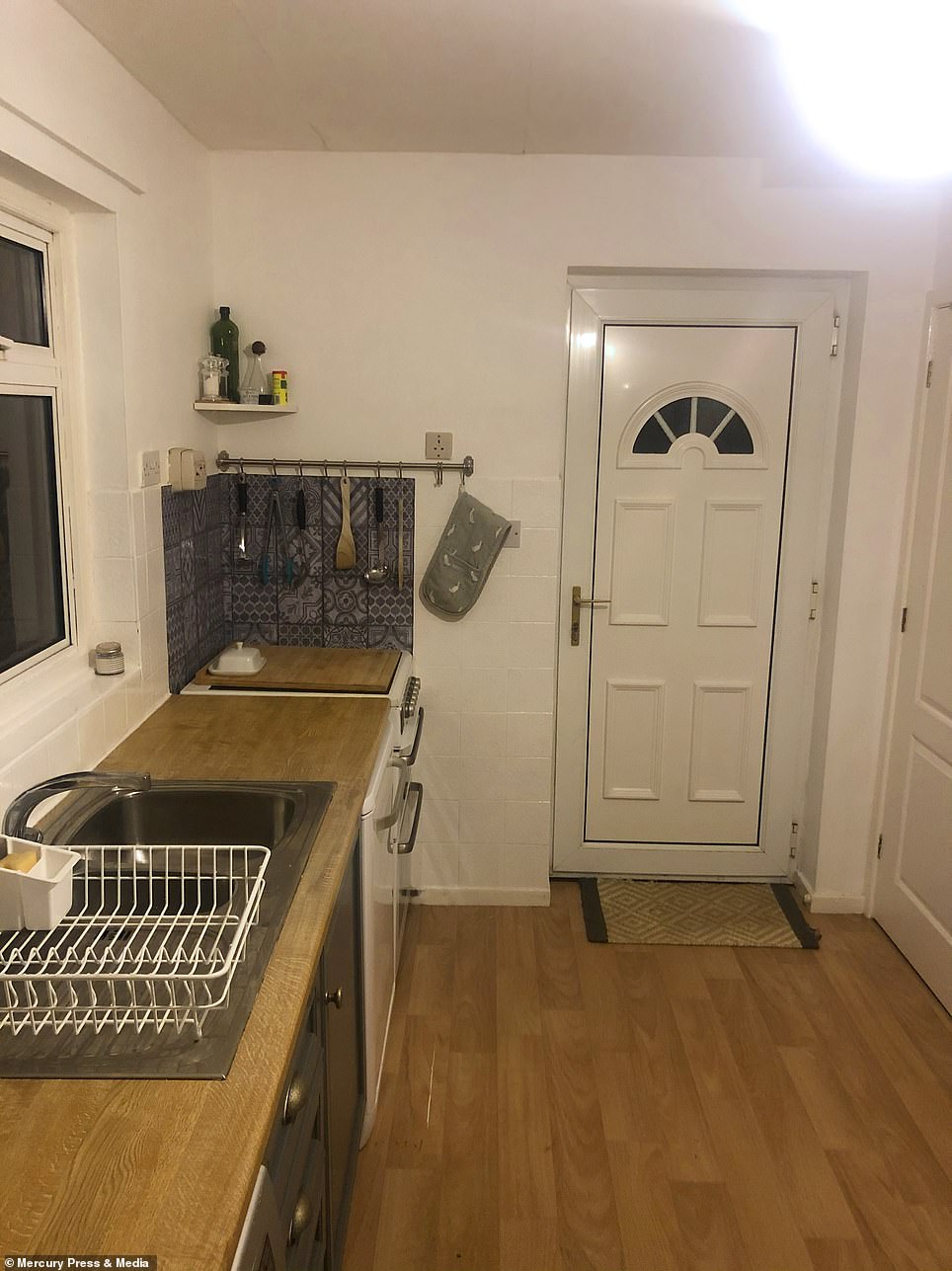 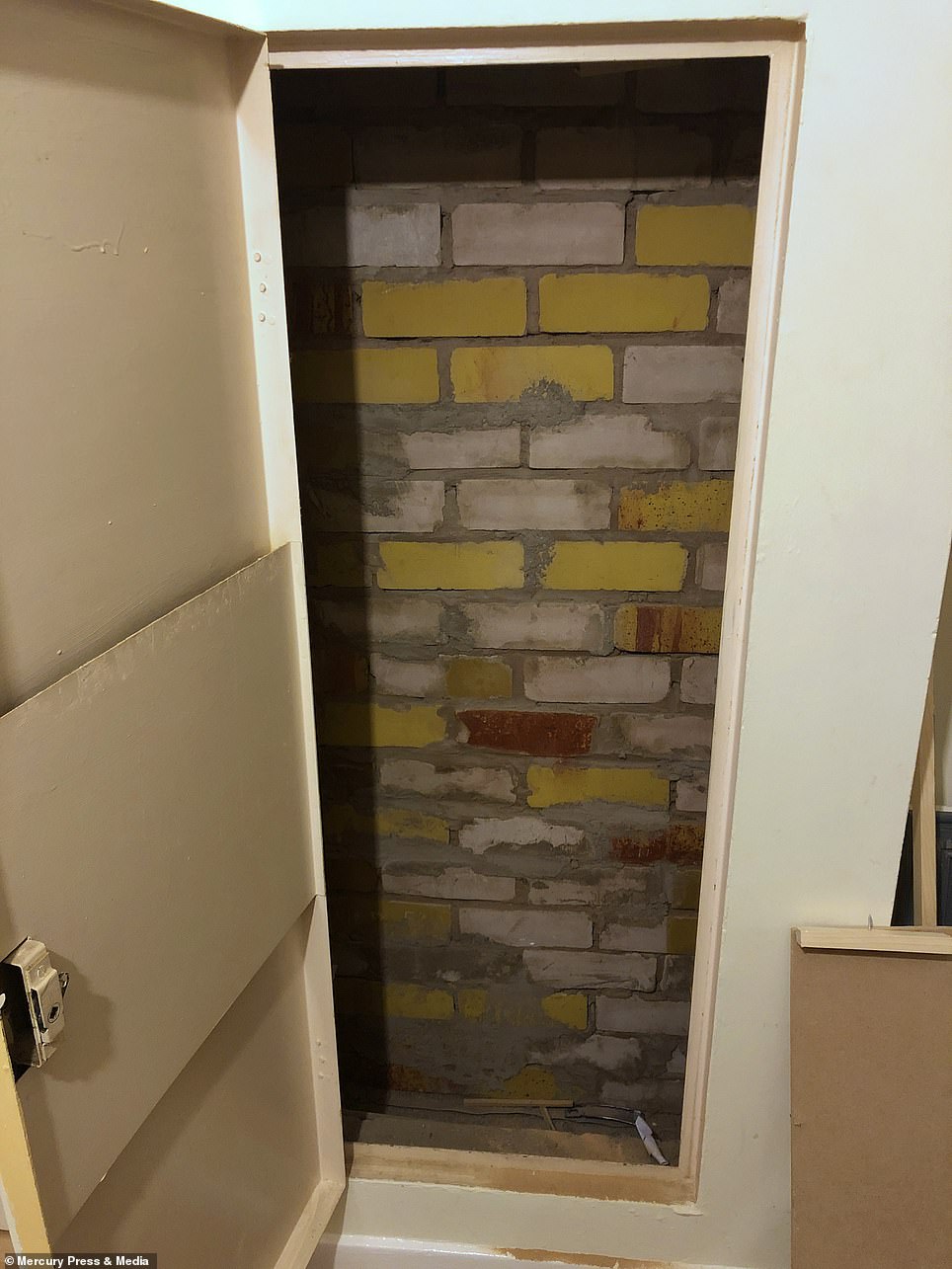 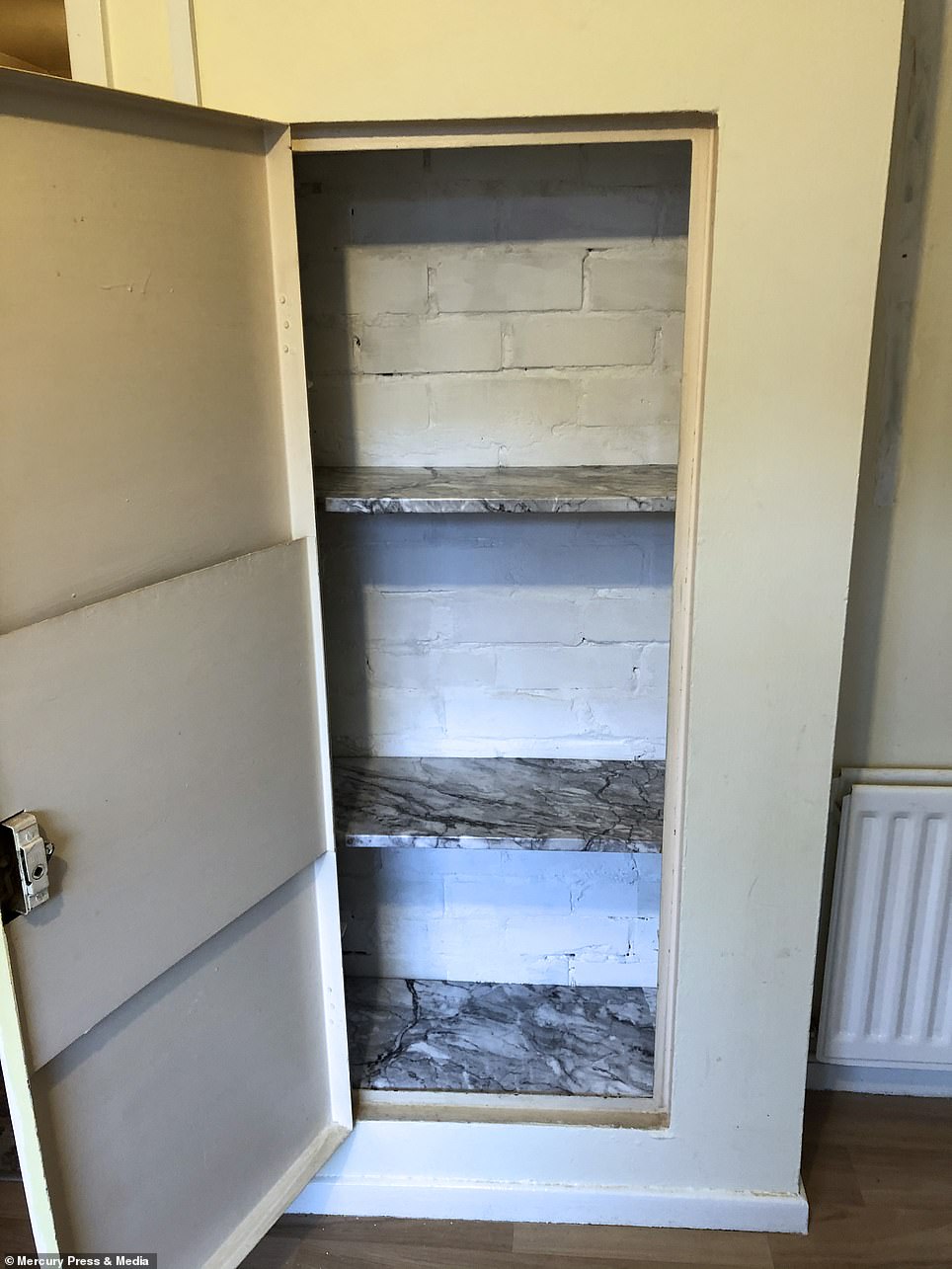 Mrs Waters transformed a strange room which may have housed a boiler vent, left, into some cupboard space

But when Mrs Waters, a teacher, was unable to leave the house due to 10 days of dangerous flooding in Shropshire, she decided to overhaul the room, transforming it using high street paint and online finds for a much more pocket-friendly £68 – saving a whopping £9,932 in total.

The mother-of-one, originally from South Wales, said: ‘The house was built in the 60s and it’s only had one owner since then so it hadn’t changed at all – it was just like a time warp.

‘We had to do lots of work on it and decorated the bedrooms first because they were quite easy to do.

‘We got to the kitchen and decided to get quotes to have it all redone professionally.

‘But I’ve been housebound from all the flooding in Shrewsbury so I decided to do about two or three hours on the kitchen every day, in between looking after my son Artie.

‘I’ve done a bit of DIY before in carpentry as a hobby over Christmas but I’ve never done anything on my own home before.

‘My dad made sure he taught me how to put up shelves and change a tyre when I was younger – I like to think I’m quite handy!

‘I joined a DIY group on Facebook where I got lots of inspiration from people who were literally just giving cupboards a lick of paint, and it changed the whole room, so I thought I’d give it a go myself.

‘I also enjoy going around show homes and getting inspiration, and I referred to lots of pictures before I went to Wilkos to get some paint.

‘With a little painting help from Will and Artie, it took me about six half-days to complete.’

During half term last week, Mrs Water’s town was completely cut off, with schools and shops shutting down due to the floods – but luckily her home in particular is situated further from the River Severn, which has burst its banks from heavy downpour.

The roads have since been shut off, causing deadlock traffic and her usual ten-minute journey from work now takes 45 minutes.

After gutting and cleaning the kitchen to create a fresh canvas, she first took all the cupboards off and sanded them down ready for paint, as before they had a high-gloss finish.

She then used sugar soap to rid the cupboards of a thick yellow layer of nicotine, as the previous owner was a smoker, and painted them all with a pot of grey paint from Wilko, costing £12.

Mrs Waters bought all the new cupboard handles for just £18 on eBay, and screwed them to each of the ten cupboards and drawers after the paint had dried.

To whitewash the once yellow tinged walls and tiles, she used a tin of £8 paint from Wilko, and some white wood paint for the kitchen window.

The tiled area around the cooker was created with a £10 roll of vinyl from B&Q, which she also used to wrap recycled shelves from the original kitchen.

But her main task was finding a use for a particularly strange built-in cupboard, which is placed inside the wall across from the main kitchen units. 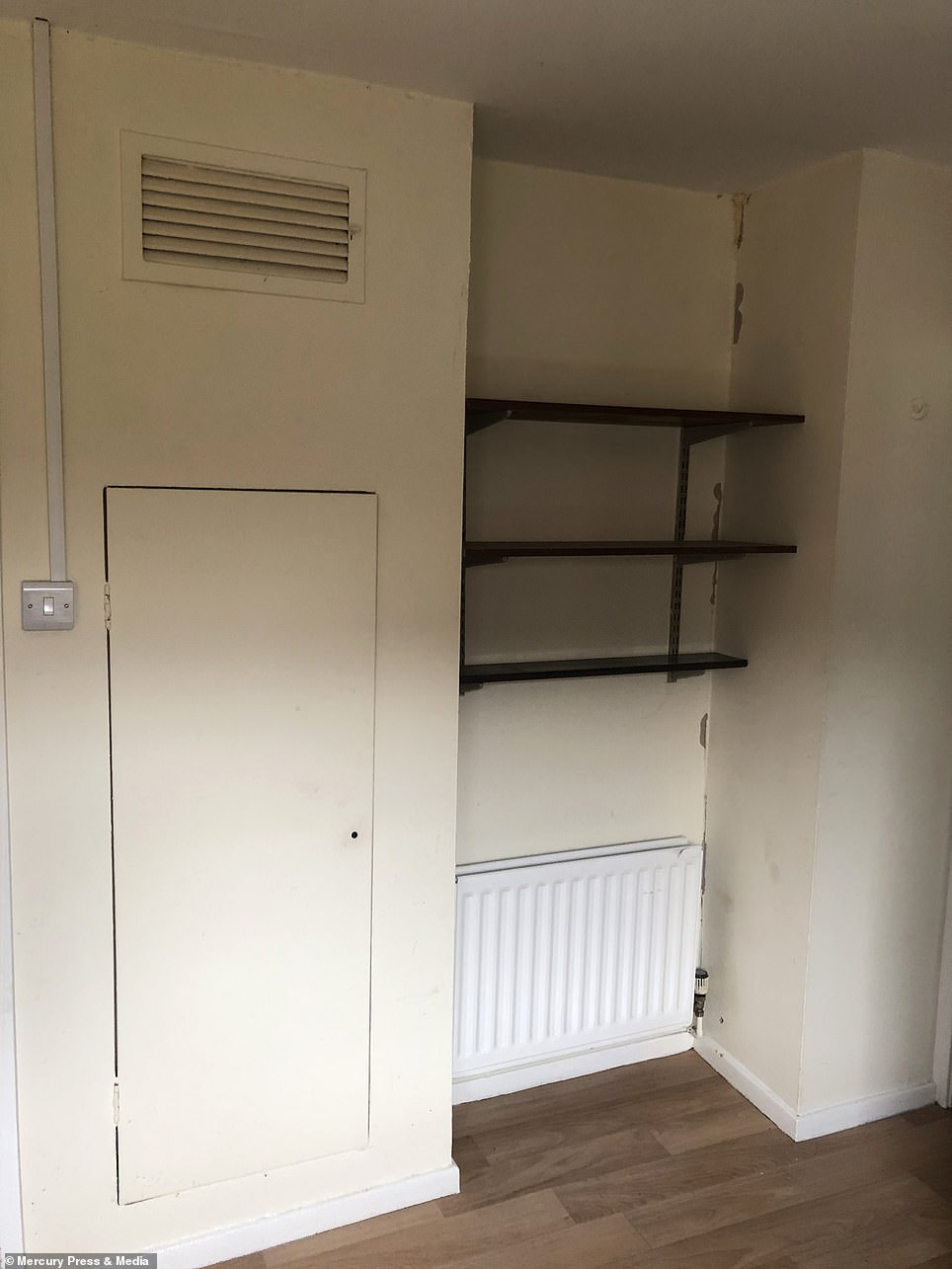 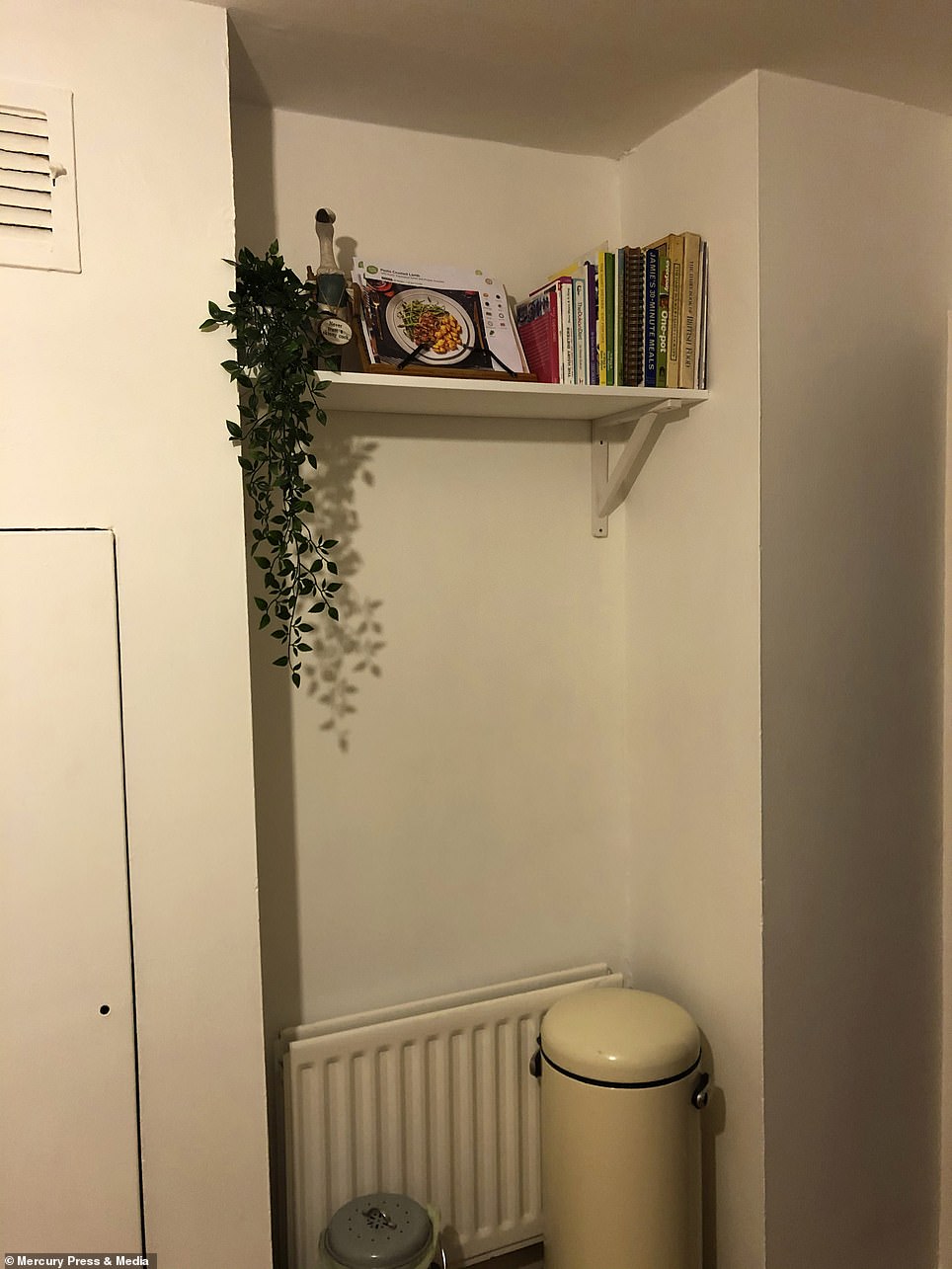 Mrs Waters said: ‘There’s a cupboard where the old boiler vent used to be, no one could figure out what it was for when we moved in.

‘It’s the reason why the professional quotes were so high because if we had it knocked down there would need to be a strong structure put in place to brace the ceiling.

‘So I just thought, why don’t we turn it into a kitchen cupboard?

‘I sanded and painted the inside, whitewashed the brick effect wall and added two shelves inside which cost £20 – it now stores all our pots on and pans.

‘Recycling old stuff from your house is easier to do than you think!’

Overall, she spent just £68 on the transformation, and has received rave reviews from her family and others online, after posting it on Facebook.

She added: ‘I did a big reveal of the kitchen for my mum and she was gobsmacked.

‘I can’t believe how popular the Facebook post became – it just makes me feel proud of my work.

‘People keep asking me where I got the tiles from but they’re just the old ones that have been painted over.

‘I absolutely love the kitchen now and don’t feel the need to pay any more money on it.

‘My next project will be the kitchen floor, which I will probably use vinyl on.

‘If the weather was good, I would have been re-doing the garden, but being stuck in my house meant that I managed to transform my kitchen because of the floods!’

This Day in History: Sept. 1

Whitney blames herself for Tina's death as Mick reels in EastEnders