Home » World News » Mugger, 19, who beat up and robbed a restaurant-goer spared jail

Teenage mugger, 19, who beat up and robbed a restaurant-goer is spared jail as a judge says his welfare should be prioritised because he was a 17-year-old ‘child’ at the time of the attack 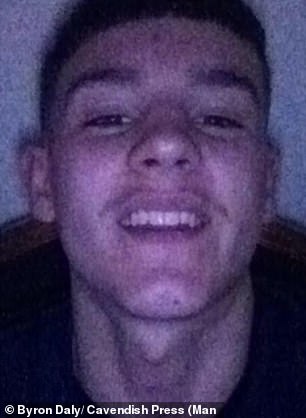 A teenage mugger who was one of 12 thugs that violently robbed a man has been spared jail by a judge who said the the courts must prioritise his ‘welfare’.

Byron Daly was 17 when he and other yobs snatched cash from a 35-year-old after he’d for a meal at a restaurant.

As well as cuts, bruises and a chipped tooth, the traumatised victim suffered sleepless nights due to his ordeal.

Daly admitted robbery and assault but was handed a two-year jail sentence, suspended for 18 months and fitted with an electronic tag.

Judge Elizabeth Nicholls said that because Daly was a ‘child’ at the time of the attack, he must be dealt with as one despite the fact he faced Manchester Crown Court as a 19-year-old today.

‘Giving a 19-year-old charged with this offence a suspended sentence will seem lenient to some but this is the sentence because of the age you were at the time of the incident and the time that has passed since,’ she said.

‘I have to consider the significant mitigation on your part and the fact that you were 17 at the time of the offence. Had you come before this court as a youth then the primary concern of the courts in such cases is the welfare of the child. 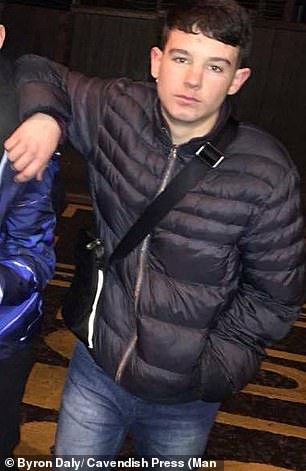 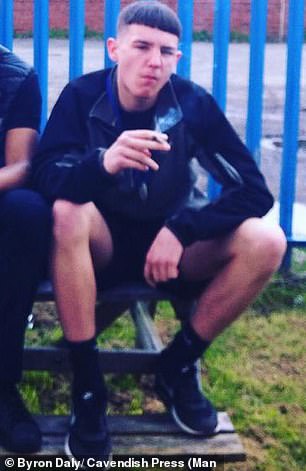 Byron Daly (pictured) was 17 when he launched a sickening attack in Manchester city centre and a judge told court that, because he was legally a child at the time, his welfare must be prioritised in sentencing

‘You have committed no further offences since then – moreover you have removed yourself from the other people involved and the lifestyle you were leading. And we have to consider that young men when together in large groups often act differently than they would have when alone.’

But she added: ‘You attacked an individual as part of a pack of young men. You set about him punching and kicking him. Fortuitously the injuries were mostly scratches and bruises but the very fact this was such an unpleasant attack with a group attack he was understandably fearful for his life.

‘He has told the court of how scared and humiliated he was. His house keys and driving license with his address on were taken making him fear the same group would come to his home with keys and be able to gain access.

‘He has since had complications with his health which he understandably feels are a direct result of this attack. Feet were used as a weapon and there was an aggressive pack mentality.

‘Seize this opportunity and address the issues you have. You have a girlfriend standing with you. You don’t want to spend the rest of your life fearing possible prison sentences. Comply with the terms of this order and get on with your life.’

The incident occurred on April 23 2017 after the victim Shaun Stevens had been out for dinner and drinks in Manchester’s Spinngfields district. 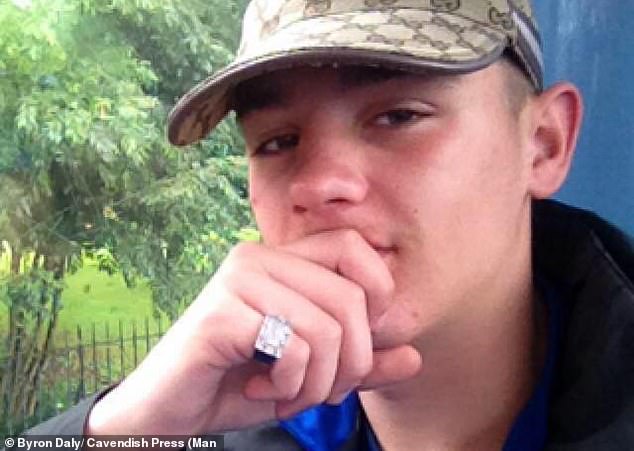 Prosecuting, Duncan Wilcock, said: ‘He consumed half a bottle of wine and some cocktails and went through Piccadilly Gardens with the view to buying some cannabis.

‘He acknowledged being slightly unsteady on his feet from the alcohol consumed. A male appeared to him asking him what he wanted and Mr Stevens said he wanted a “20 bag” of cannabis. The male pulled out of his pocket a smaller bag – what the victim said looked like a “10 bag” – and the Mr Stevens said that wasn’t enough.

‘The man then told the victim that one of his friends had more and to wait here. A few moments later another male appeared with several other males around him. The new male produced a bag which the victim was happy with. 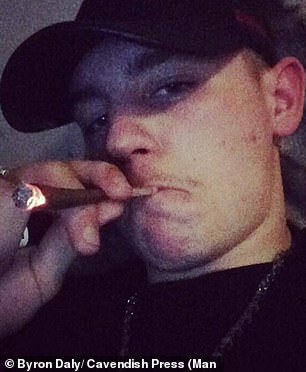 ‘Mr Stevens then found himself surrounded by more and more males. One of the men opened their jacket to reveal inside pockets lined with cannabis. As Mr Stevens looked at the jacket he was surrounded by yet more males and it was at this point that he felt something in his left pocket.

‘He realised it was a male’s hand and asked the group generally “what do you think you’re doing?” He was then told to hand over his wallet and was then hit on the back of the head and fell to the floor.

‘He then felt numerous punches and kicks to the body and head from every direction. He felt another hand going into his right pocket and a voice saying to hand over his phone. Mr Stevens says he was screaming for help. Repeatedly being kicked in the body and head. He says he was genuinely scared for his life.

‘He lost control of his body function and he urinated himself. The attack went on for about 30 seconds before all the males ran off. The victim then called the police. The value of the items taken were a £70 designer wallet, £30 from inside the wallet along with bank cards and a driving license. The victim’s house keys were also stolen.

‘The victim says he is ‘extremely shocked and humiliated’ at the way this has made him feel. This was an act of entirely unprovoked violence. He says he is scared to sleep. The men took his house keys and driving license with his address on meaning they have access to his house. He didn’t seek medical attention at the time but reports a lot of soreness to his body and jaw.’

Daly initially admitted assault and completed a youth rehabilitation order but there were delays over his prosecution for robbery and he asked to be tried by a jury.

The case was set down for trial in February but he changed his plea to guilty and the case was postponed for reports.

In mitigation, defence lawyer Mark Fireman, said: ‘My client is under no illusion over how ugly this incident was but I draw attention to the fact he was 17 at the time – not considered an adult in these courts. The delay in sentencing – resulting in him now being tried as an adult – is not his fault. He would have been be a youth had this case been heard earlier.

‘At the time of this event he was a young man with no previous convictions. The passage of time is a consideration with more than 2 years elapsing since. He has done everything he can to distance himself from the people and type of life he was leading.

‘He is currently living with his girlfriend at her grand parents house. It is extremely significant in my submission that since June and July 2017 Byron Daly has not committed any offence and has made the utmost effort to rectify his life.

‘He has been referred to a psychiatrist. He has been prescribed to anti depressants. He’s making every effort to address his problems. The man in that CCTV footage from 2017 is an entirely different man to the one in front of you today.’

Daly will have to wear the electronic tag for three months as part of a 9pm to 7.30am curfew.