Home » World News » ‘My future and my life are there’: International students speak of life in limbo

More than 80,000 international students left Victoria last year due to the coronavirus pandemic. Many flew back to their home countries with no indication of when they can return to the lives they built in Australia, often at the cost of tens of thousands of dollars.

Federal and state governments have placed students behind overseas Australians in the queue for up to 6000 quarantine spots a week since international borders shut last March. 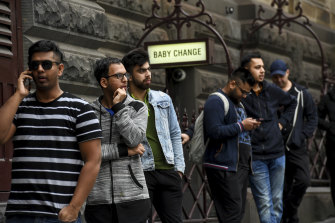 That was set to change in New South Wales this month as Premier Gladys Berejiklian outlined plans – later scuppered by Sydney’s outbreak – for students to fill half the state’s 3000 weekly quarantine spots, which she said would give a significant boost to the NSW economy.

Victoria has offered no plan and on Saturday Premier Daniel Andrews dismissed reports that he would take a bespoke quarantine plan for international students, Victoria's biggest export at $13.7 billion annually, to National Cabinet on February 5.

His stance compounded news last week of a 50 per cent cut to international arrivals across Australia until at least February 15 to guard against the more virulent British strain of coronavirus, fuelling fears that international students have already begun preferencing countries such as Canada and Britain over Australia.

The Age spoke to four international students stuck in limbo in their home countries.

Viviana Gomez thought she was visiting family in Bogota, Colombia, for a month last March when Australia’s borders shut. Beyond the English course she was enrolled in, a part-time job and $50,000 she had spent in Australia since arriving in 2018, Ms Gomez, 29, was suddenly separated from her partner Juan Sebastian. They had barely spent a day apart since they met 10 years ago. 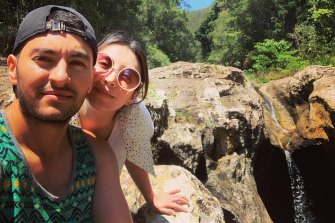 Viviana Gomez with her partner Juan Sebastian. She is stuck in Colombia while he studies his masters in Melbourne.

“Right now I’m with my parents in Bogota, just waiting every day for a real plan to bring back international students,” Ms Gomez said.

“Australia has always been my dream. We love the people, the culture, the safety. At the moment it’s tough to see the light. I wake up dreading that we’ll lose the things we worked for there.”

Ms Gomez said she spoke every day with her partner, who is studying his masters in accounting in Melbourne.

“My future and my life are there. I feel like if Australia is going to close forever that’s fine – just say it!"

Danielle Bunning knew she wanted to come back to work in Australia the moment her one-year exchange at Monash University ended in August 2019. 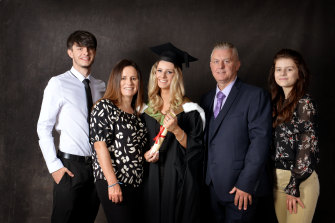 Danielle Bunning (centre) after her graduation from her university in England last year.

“I can honestly say my time in Australia was the best year of my life,” the 23-year-old from England’s Midlands said.

The budding lawyer soon began saving up $16,000 to start a legal training course in Melbourne in July 2020 that would admit her as a lawyer in Victoria.

The pandemic pushed her starting date to January 2021 and, beyond knowing that won’t be happening, Ms Bunning says she has been “left in the dark”.

“My Australian visa is awaiting approval. I can’t commit to a legal job here in England in case I am able to come to Australia, so I’m working temporary factory jobs and sending 80 per cent of my savings to my Australian bank account.”

The Brit hopes to start her course in July 2021 and said it was feasible she could have received a COVID-19 vaccination by then.

Nina Karimi rejected offers from Canada and Norway and opted to study her biomedical sciences PhD at the University of Queensland. She chose Australia for its cutting-edge research facilities and the opportunity to collaborate with other international students.

A year on, she hasn’t set foot in the country and fears her full scholarship is in doubt.

“I chose Australia owing to its pre-COVID reputation as the best destination for foreign students," said Ms Karimi, 26.

"The recent events and the government’s inaction on the issue has led me to question my choice.

Amna Shah planted new roots in Melbourne every year since arriving to study business at Swinburne University in 2017. When she flew home to Peshawar, Pakistan, in February last year, she planned to return in April and start her PhD in economics and taxation. International border closures never gave her the chance. 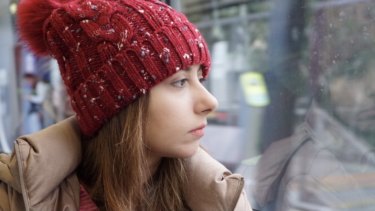 Amna Shah came to Melbourne in 2017 and she left her clothes, shoes and violin behind when she returned to Pakistan.

Ms Shah, 28, left clothes, shoes and her violin with her best friend in Melbourne and her local phone number is still active.

Unlike many international students who joined Australian students in studying online last year, Ms Shah is set to defer her course for a third time next month because her research project requires in-person collaboration.

“Research degrees are an important aspect of the education sector, but there has been absolutely no communication, no clear messages for us,” she said.

“My life has basically come to a standstill."

'Avengers: Endgame': What Happened to FRIDAY After Tony's Death?

Rare and valuable James Bond memorabilia to go under the hammer

12 surprising things you didn't know about Netflix's 'Love Is Blind'