Among the envoys is a high-ranking official and a diplomat in charge of relations between North Korea and the US. 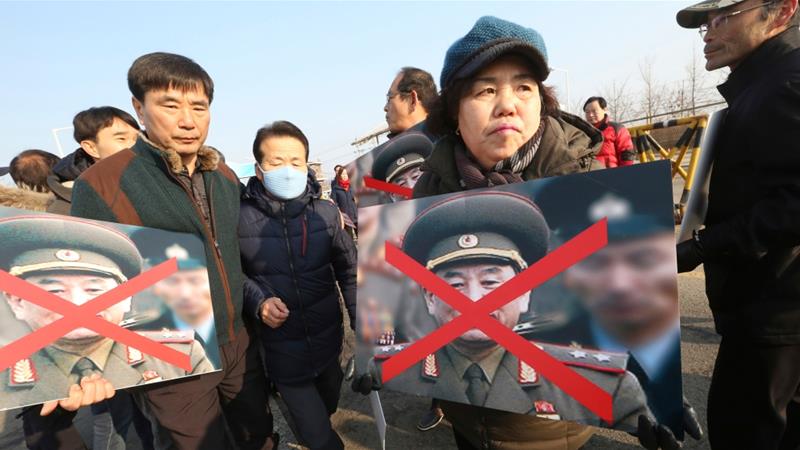 A delegation of high-ranking North Korean officials has entered South Korea on Sunday to attend the closing ceremony of the 2018 Pyeongchang Olympics.

Among the delegates are Kim Yong-chol, a high-ranking party official, and Choe Kang-il, a diplomat in charge of relations between North Korea and the United States.

The 72-year-old Yong-chol, who is blacklisted under the sanctions imposed by South Korea on its northern neighbour, is seen as one of the main people responsible for the sinking of a South Korean naval ship in 2010, which killed 46 sailors.

He is currently head of United Front Department, a unit of the Workers’ Party of Korea’s that is in charge of relations with the South.

Yong-chol’s attendance led to protests by South Korea’s main opposition party and relatives of the sailors who died in the 2010 sinking of the South Korean naval ship.

A Seoul-led investigation accused the North of torpedoing the South Korean navy ship Cheonan on 26 March 2010, an allegation the North has denied.

During that incident, Yong-chol was head of North Korea’s reconnaissance bureau, which is tasked with overseas intelligence gathering.

South Korean activists and representatives of the main opposition party voiced their unhappiness of Yong-chol’s arrival by waving protest signs calling for his arrest.

Another member of the delegation attending the closing ceremony is Choe Kang-il, a high-ranking diplomat and deputy director-general for North American affairs at North Korea’s foreign ministry.

Kang-il presence has led to hopes the US and North Korea will have a meeting to discuss the recent increase of hostilities between the two countries.

Ivanka Trump, daughter of US President Donald Trump, was also in Pyeongchang to attend the closing ceremony for the US.

Originally, a meeting between the US and North Korea was planned for the opening ceremony, which was attended by Kim Yo Jong, sister of North Korea’s leader Kim Jong-un.

However, shortly before that encounter was to take place, North Korea cancelled the talk, according to the US.

On Friday, the US also announced the “heaviest ever” sanctions against North Korea, in an attempt to prevent North Korea from further developing its nuclear programme.

Despite negotiations between the US and North Korea not happening and the US announcing new sanctions, the two Koreas held their first official talks in more than two year.

The Olympic Games held in South Korea have led to a rapprochement between the North and South, with North Korea sending athletes and cheerleaders to attend the sporting event held in the South.

The two countries also made the landmark decision to compete under one flag during the Winter Olympics.