North Korea on Sunday fired at least one ‘unidentified projectile’ into the sea off its east coast, the Yonhap news agency reported, citing the South’s military joint chiefs of staff.

The projectile was fired towards the Sea of Japan, also known as the East Sea, the report said, adding that additional details were not immediately available from military officials.

It was the fourth round of such launches this month by Pyongyang, as the world struggles with the coronavirus pandemic — and as a prolonged hiatus in disarmament talks with the United States drags on. 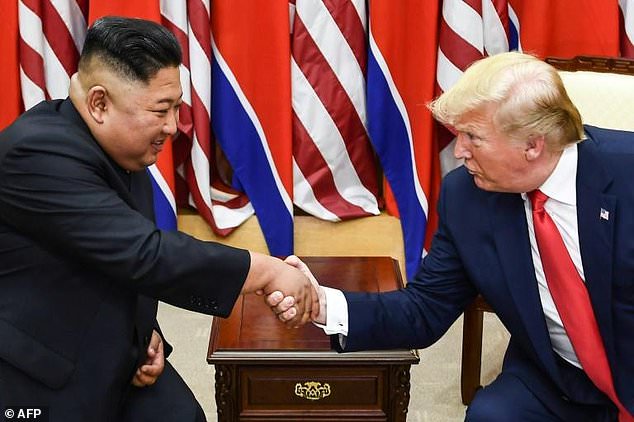 North Korean leader Kim Jong Un (L) and US President Donald Trump shake hands on June 30, 2019, during a meeting on the south side of the Military Demarcation Line that divides North and South Korea 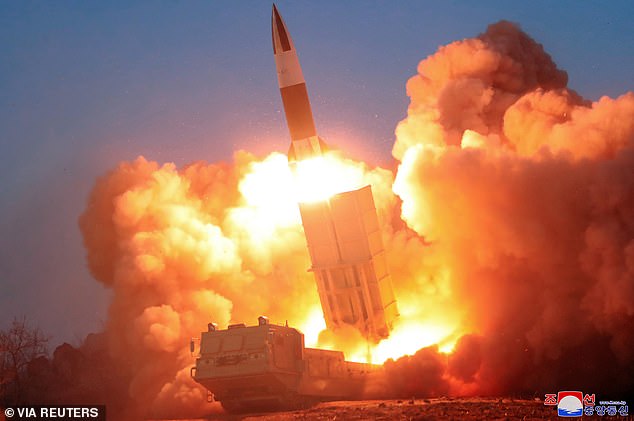 In this image released by Korea’s Korean Central News Agency on March 22, a missile is fired from an unknown location in the country

A little over a week ago, the nuclear-armed North fired what were believed to be two short-range ballistic missiles.

The report cited Kim’s powerful sister Kim Yo Jong, who warned that the apparently good personal relationship between the two leaders would not be enough to kickstart broader relations. 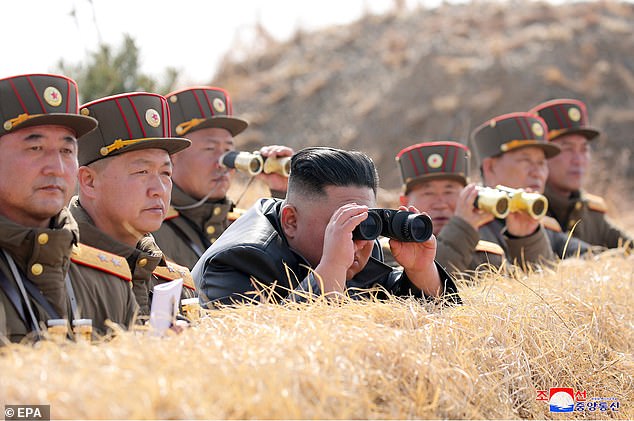 A photo released by the official North Korean Central News Agency (KCNA) shows Kim Jong-Un (C), chairman of the Workers’ Party of Korea, chairman of the State Affairs Commission of the Democratic People’s Republic of Korea and supreme commander of the armed forces of the DPRK, following a firepower strike drill of short-range ballistic missiles of the Korean People’s Army, at an undisclosed location in North Korea, 21 March 2020

‘In the letter, he… explained his plan to propel the relations between the two countries of the DPRK and the US and expressed his intent to render cooperation in the anti-epidemic work,’ an apparent reference to the coronavirus pandemic, she said in the statement reported by the North’s Korean Central News Agency (KCNA).

A senior US administration official confirmed Trump had sent a letter to Kim, ‘consistent with his efforts to engage global leaders during the ongoing pandemic’.

Analysts say the North has been continuing to refine its weapons capabilities more than a year after a summit between Kim and Trump broke down in Hanoi.

The deadlock is over sanctions relief and what North Korea would be willing to give up in return.

Pyongyang is under multiple sets of United Nations, US and other sanctions over its weapons programmes.

The North set for Washington a unilateral end-2019 deadline to offer fresh concessions, and in late December, Kim declared his country no longer considered itself bound by moratoriums on nuclear and intercontinental ballistic missile tests.