Whatever Theresa May does with Brexit is okay with Donald Trump as long as their two countries can trade freely, the US president told her on Friday.

The president also apologised to her over a politically damaging newspaper interview the previous day, in which he dismissed her plan for Brexit as probably killing the prospects of a trade deal between the two countries. 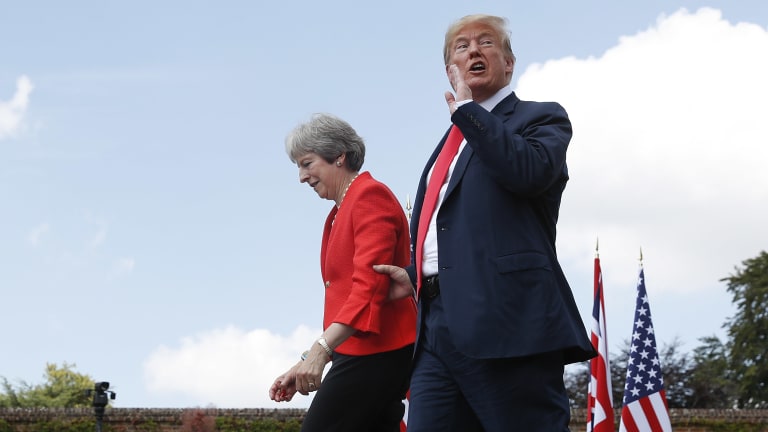 President Donald Trump responds to a reporter\’s shouted questions as he walks with British Prime Minister Theresa May at the conclusion of their joint news conference at Chequers.

At a press conference with May after long talks at the prime minister’s country residence Chequers, Trump doubled down on claims he had made to The Sun newspaper that immigration was bad for Europe, and that her rival Boris Johnson would make a great prime minister.

But he also smothered May with effusive praise, and walked back on his criticism of her approach to Brexit, in an attempt to patch the diplomatic rift caused by his earlier comments.

Many political commentators including the Telegraph’s Gordon Rayner said Trump had humiliated May on Thursday.

The president's remarks to The Sun materially damaged her biggest project on the eve of his visit, and he had gone out of his way to praise her political rival who had quit in protest at her Brexit plans earlier in the week.

Most damaging was Trump’s statement that the US would probably not do a trade deal with the UK because of the limitations on trade implied in May’s Brexit plan.

It has emboldened Brexiteer MPs to oppose the deal more fiercely.

But on Friday Trump said that after speaking with May and her advisers he had been convinced a trade deal “absolutely will be possible”.

He added that May should make sure “we don’t have any restrictions” on post-Brexit trade, contrasting it with EU tariffs on cars and restrictions on farm imports. 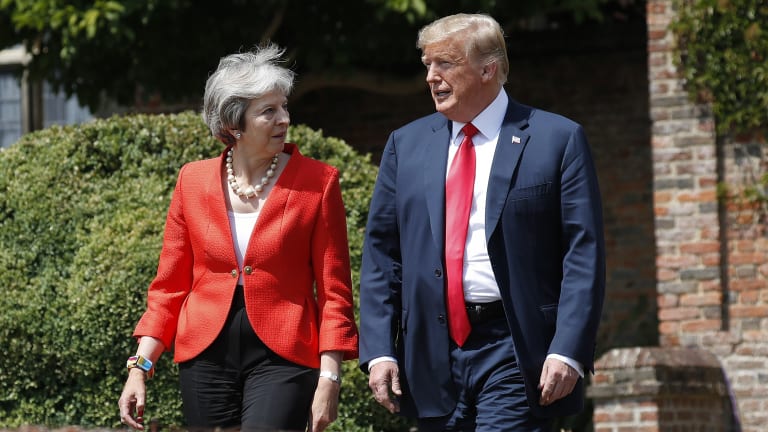 Donald Trump and Theresa May walk out together to begin their joint news conference.

Trump said he had made a suggestion to May on a negotiating tactic with Brussels that she had not taken because it was “maybe too brutal”, but she could still use it if things took a turn for the worse.

But he also said “this incredible woman right here is doing a fantastic job, a great job and I mean that”.

He said he had gotten to know her a lot better in the last few days and reckoned she was a “tough negotiator and a very smart and determined person” who would do very well.

“I would much rather have her as my friend than my enemy,” he said.

On immigration, Trump said Europe was “changing culture” and “changing security” through its policies and “they’d better watch themselves”. Immigration was “very bad for Europe”, he said, citing recent terror attacks.

During the meeting and press conference at Chequers, tens of thousands of anti-Trump protesters packed Regent Street in London under fierce sunshine, carrying banners criticising the US president’s personality and politics.

They gathered under a big ‘baby Trump’ blimp, showing him snarling and holding a mobile phone, dressed in only a nappy.

Looking ahead to his meeting with Russian president Vladimir Putin on Monday, Trump said he would be discussing many topics but his biggest hope was an agreement to substantially reduce nuclear proliferation – his ultimate dream was to get rid of the weapons altogether, he said.

He confirmed that he had threatened to pull US troops out of Europe at the NATO meeting in Brussels during the week, but said the NATO countries had come together and agreed to increase military spending which would make them stronger and more unified.

“Do you think Putin is happy about that? I don’t think so,” Trump said.

After the speech, Trump flew to Windsor Castle for tea with the Queen.

Emmerdale cast: Who plays Jamie Tate? Who is Alexander Lincoln?