Families in a cliffside community where a house plunged off the edge in a landslide have been told to move as the council ‘will do nothing’ to save their houses.

Emma, 42, her partner and four of her children could only watch on in horror as they lost the two-bedroom home – which she bought outright in 2018 – its annexe, swimming pool and their car slipped away. 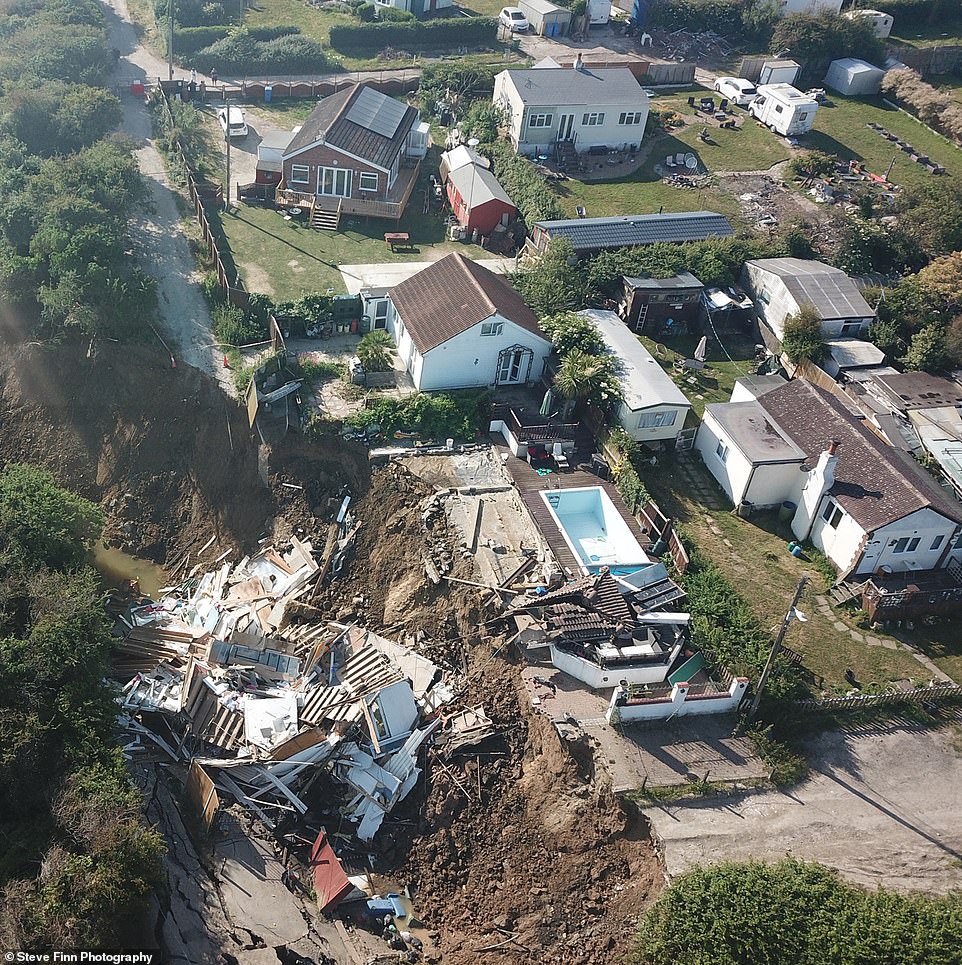 Emma Tullett’s home, bought for £195,000, completely collapsed in May leaving wreckage on its site in Eastchurch 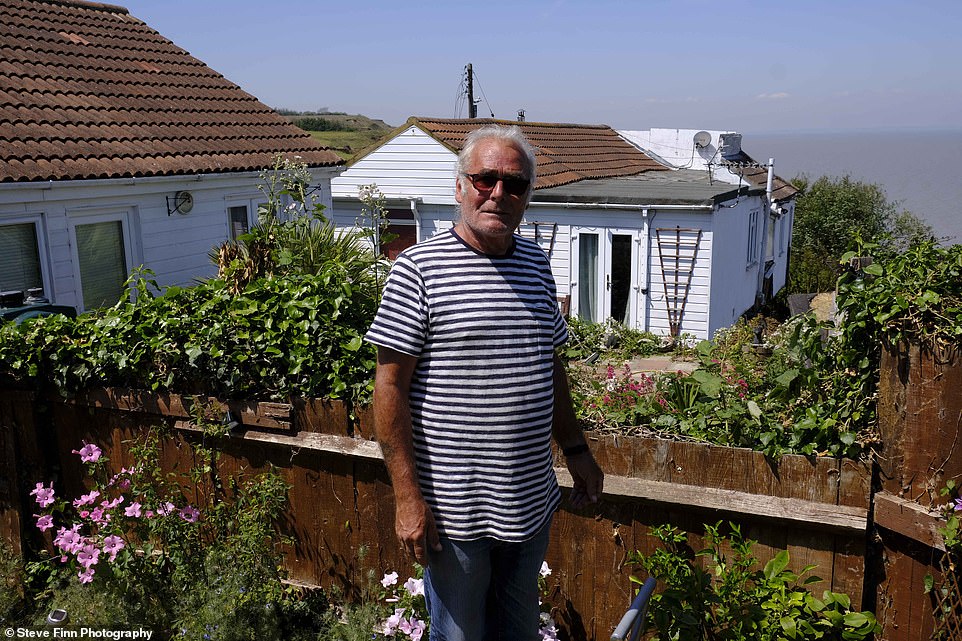 Ed Cane, 67, said he was furious with Swale Borough Council and complained ‘They are not even going to touch the cliff’

They, along with other residents in Surf Crescent, Eastchurch on the Isle of Sheppey, Kent, were plunged into temporary accommodation where Emma remains.

Now hazard warnings have been placed on two neighbouring properties after a geology report found they could be the next to go.

This means the owners, who were allowed to return home this week, must warn visitors they are in danger.

They say they feel like they have been forgotten by the council.

He spent tens of thousands renovating it but now faces being forced to move and rent somewhere. 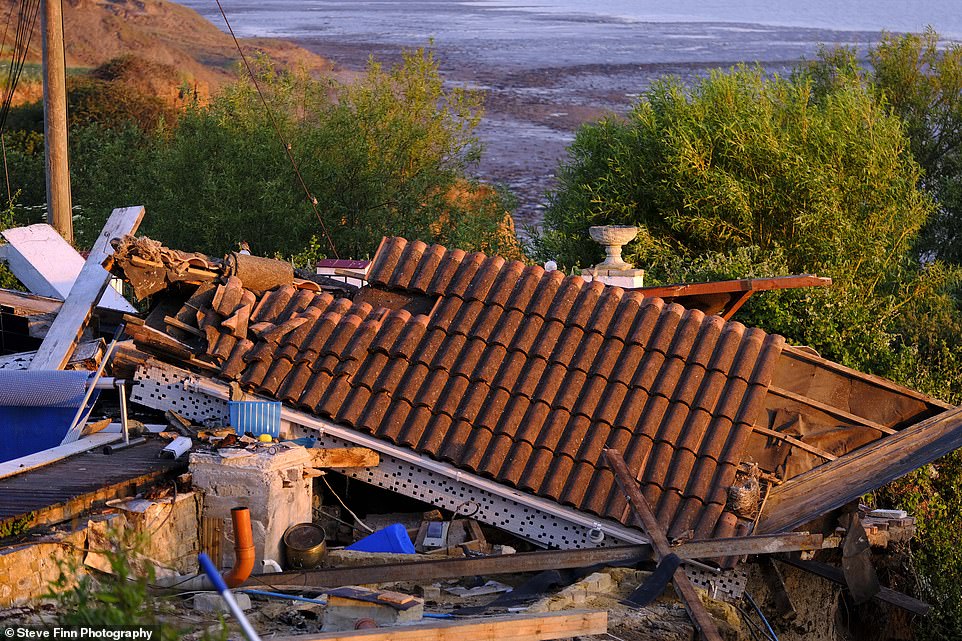 He said: ‘The council has told me to find a new place to live as soon as possible. But this is my home. I don’t want to just up and move.

‘They’ve said they’re not going to do anything about it and are not even going to touch the cliff.

‘We’ve been completely left behind and forgotten about. The council has done nothing and there is no help for us.

‘I’ve been left to deal with this on my own with no help. I don’t have enough money to go and buy another house. 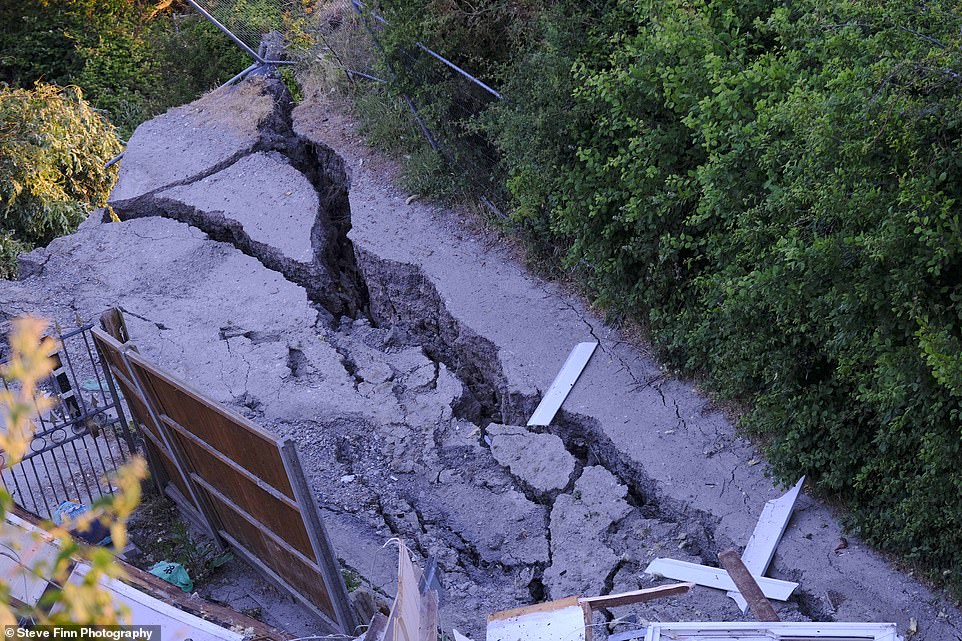 ‘There’s 50 houses on this estate and everyone is getting letters saying they should think about moving.

‘Yet we are still expected to buy and sell houses after all that’s happened. No one is going to buying mine, especially after what the council have now said.

‘The next thing they can do is put a prohibition order and then a demolition order which I would be expected to pay for myself. I could get a £6,000 grant but that’s not going to cover the whole cost.’

Ed said he could not get home insurance because the property was built on clay. 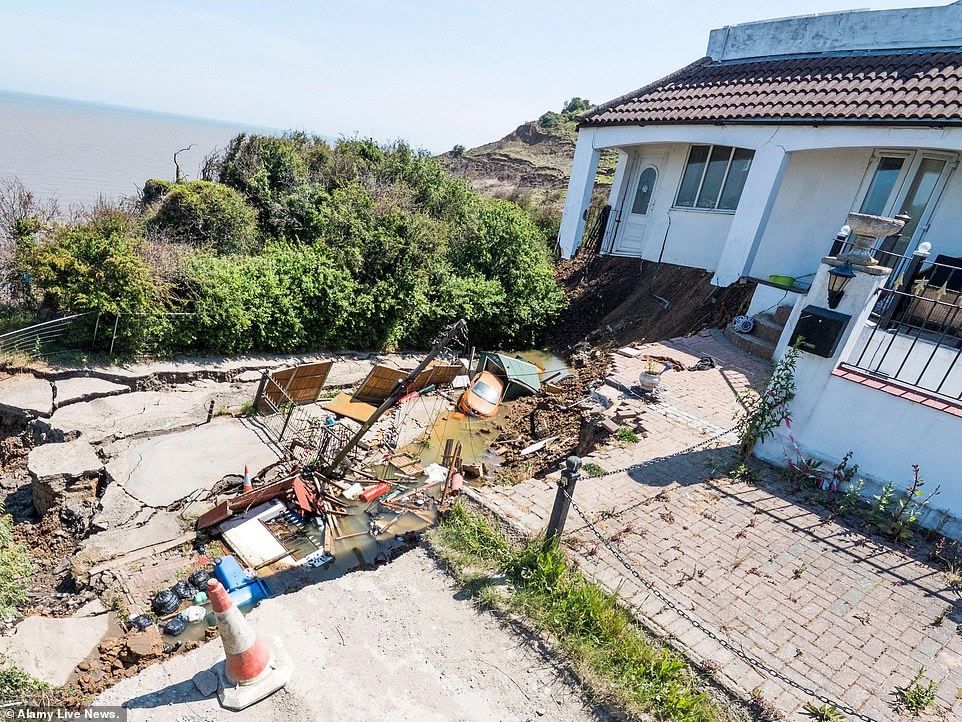 Neighbour Christine Green, 58, who lives next door with husband Julian, has also had a hazard notice issued on the property they have owned for two years.

She told Kent Online: ‘Eventually they’ll have to serve us with a prohibition notice to get out.

‘The caravan where my son Jason lives will go first and he has cerebral palsy. They think that will happen in a few months. Then in three to five years my house will go.

‘The upsetting thing is that we bought this property in 2018 and no one told us this was going to happen. We knew about the cliff erosion but this wasn’t that, this has got to be due to a sinkhole.’ 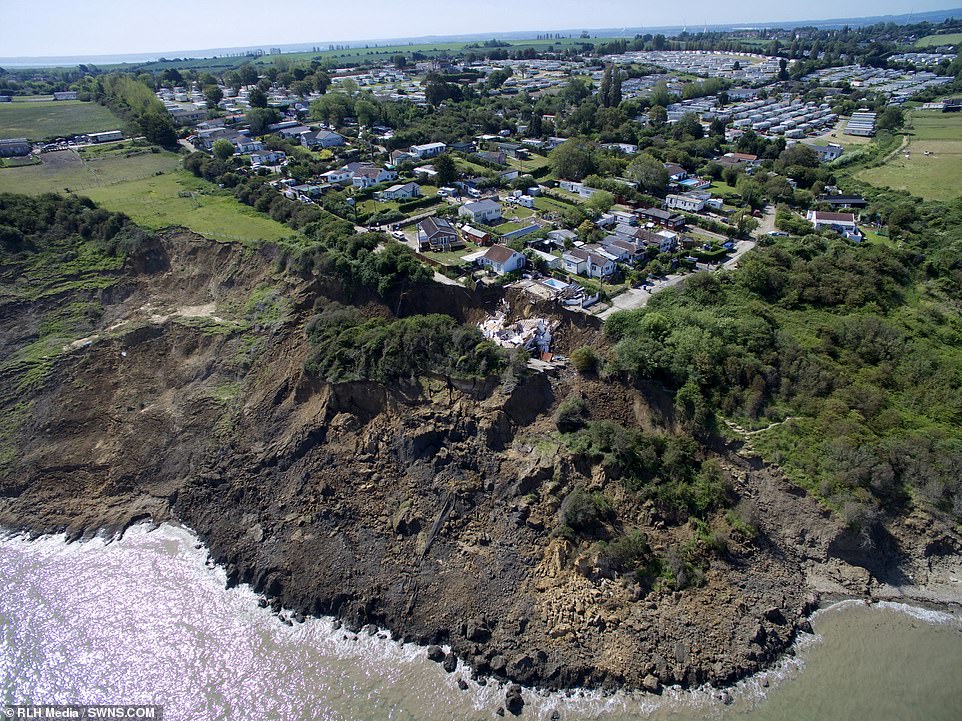 What is coastal erosion? How tides and geology mean some areas are far more at risk of being washed away

The occurrence of coastal erosion is dependent upon the balance between the resistance, or erodibility, of the coastline and the strength, or erosivity, of the waves and tides affecting the area.

These conditions are, in turn, reliant upon a number of factors, including topography, the composition and structure of the geological formations exposed at the coast, the state of man-made coastal defences, local currents and tidal range, wave climate (as characterised by wave height, period, direction and fetch), groundwater, sediment supply, and relative sea level.

Consequently, rates of coastal erosion and accretion are very variable at regional, national and international scales.

Coastal erosion typically results in a landward retreat of the coastline. This can increase the risk of coastal flooding and result in loss of land and damage to buildings, infrastructure and agricultural land.

Sudden coastal erosion events, particularly those in the vicinity of coastal cliffs, may directly endanger the lives of people. The movement of salt-water into freshwater areas (saline intrusion) can occur during coastal flooding and can impact upon the biodiversity of previously freshwater or terrestrial ecosystems.

In 2014, campaigners launched an action group to put pressure on the Environment Agency and Natural England to have netting installed on the cliff, where plants and trees would be laid to encourage growth in the area and therefore help strengthen the land.

It was hoped the scheme would make the area liveable for a further 40-odd years.

But the £30,000 council-funded scheme did not get underway until April 2016 – with locals saying there was red tape which caused delays.

Swale Borough Council carried out surveys and sought specialist advice in the aftermath – before telling three households they could return.

The council say ‘erosion in this area is not new’ and a formal policy of no active intervention has been in place since at least 1996 due to being a Site of Special Scientific Interest and a ‘lack of economic justification to provide protection against coastal erosion’.

The technical report found ‘a number of contributing factors to the cliff falls’ and expects more to crumble in coming years.

The council’s Cabinet member for environment, Councillor Tim Valentine, said: ‘Since the collapse, we’ve been working to support the households affected and gathering the best information and advice we can so we can help them make decisions about the next steps.

‘We’ve been speaking to the families to keep them updated with developments, and have now issued hazard awareness notices to two properties outlining our advice.

‘We will continue to work closely with the families to help them consider their next steps, as well as liaise with the wider community to manage the impact to their homes in the longer term.

‘The nature of the land here means that erosion will continue, and we expect more of the cliff to fall in the next few years, but we can’t predict with any certainty when that will be.

‘So we have given them advice on actions they can take, and we will support them as they make the difficult decisions they have ahead of them.

‘We would like to take this opportunity to thank everybody that has helped support the families affected.

‘There are too many to mention here but the professionalism, generosity and caring since that night in May has been wonderful to see.’

Covid cases drop by 24% with 2,589 daily infections and 40 deaths as Brits gear up for next phase of lockdown lifting