‘We’re having an extraordinary problem’: De Blasio closes schools and non-essential businesses in nine NYC neighborhoods with surging COVID infection rates – and says ELEVEN more could be next

De Blasio announced his plan on Sunday, saying he intended to ‘rewind’ the reopening of nine zip codes in Brooklyn and Queens by shuttering schools and non-essential businesses.

‘We’re having an extraordinary problem — something we haven’t seen since spring,’ the mayor told reporters on a conference call.

‘Today, unfortunately, is not a day for celebration. Today is a more difficult day.’

De Blasio said the city was also keeping an eye on another 11 neighborhoods with troubling rates that could end up being shut down as well.

The plan, which marks the first major reversal in the reopening strategy launched by the city in June, would have to be approved by New York Governor Andrew Cuomo. 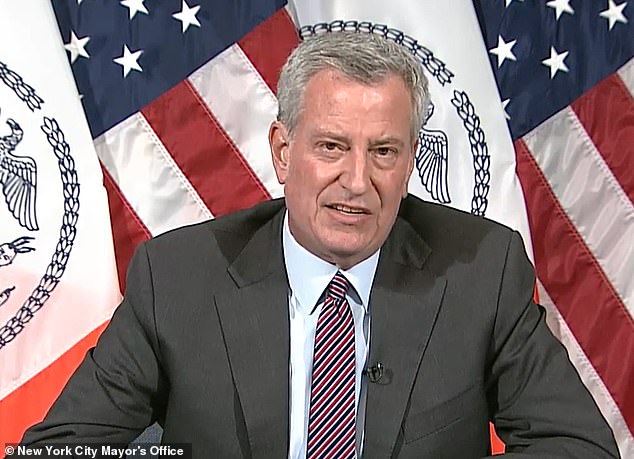 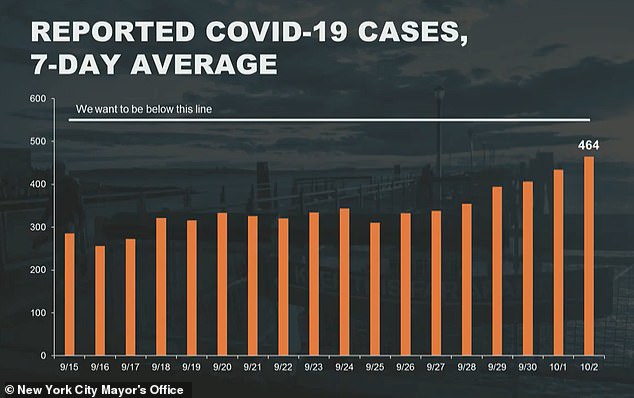 New York City on Friday recorded its highest daily new case average in at least a month with 464, according to the latest figures from de Blasio’s office. ‘We’re having an extraordinary problem — something we haven’t seen since spring,’ the mayor told reporters on Sunday

‘This can only happen with state approval,’ the mayor said, noting that he plans to meet with Cuomo to discuss the plan in the next day.

‘We understand this is unchartered territory.’

De Blasio said he hopes the lockdowns will be ‘brief … two to four weeks’.

Shuttering both private and public schools in all nine zip codes would affect thousands of children who only recently were allowed to return to the classroom.

It would also mean the suspension of in-person dining in those areas, which resumed just days ago on October 1.

Once the epicenter of America’s coronavirus crisis, New York City has recorded 241,403 infections, 19,211 confirmed deaths and 4,641 probable deaths to date.

Officials began threatening new lockdowns two weeks ago as the positivity rate – which is the proportion of positive results out of the total number of tests performed – began to climb, fueled mainly by spikes in problem neighborhoods across Brooklyn and Queens.

Prior to the recent uptick in NYC, the positivity rate had long hovered around one percent. As of Thursday, it had reached 1.7 percent.

The zip codes seeing spikes in cases have accounted for about 25 percent of the city’s new daily cases in the last two weeks, officials said Thursday.

According to authorities, the upticks are occurring in neighborhoods with significant populations of Orthodox Jews and they coincide with gatherings linked to the recent holidays of Rosh Hashanah and Yom Kippur.

Cuomo has not publicly responded to de Blasio’s remarks on Sunday. DailyMail.com has reached out to his office for comment.

The governor has spent the last week sounding the alarm about surging positivity rates in 20 zip codes across the state – including 10 in the Big Apple and 10 in Rockland and Orange counties.

On Sunday Cuomo announced that the state would begin an ‘aggressive enforcement’ of mask, social distancing and gathering requirements in the 20 ‘hot-spot’, which had an average positivity rate of 4.8 percent on Saturday.

The statewide positivity rate was 1.29 percent on Saturday. Without those 20 zip codes, the rate was just 1.01 percent.

‘Local governments have not done an effective job of enforcement in these hot spot ZIP codes. The State will be doing aggressive enforcement starting tomorrow,’ Cuomo said Sunday.

This is a developing story.

Now men are warned not to put off having children

See All of Jessica Simpson's Killer Looks From Her Book Tour