The rainbow lorikeets knew it was opening time at Melbourne Zoo. Arriving in their dozens, they swooped between the trees and their feeding plates, squawking and screeching at nearly unbearable volumes.

Between them stood three-year-old Nixon in his bucket hat, perfectly entranced by their frenzied start to the day.

Three-year-old Nixon awoke at the crack of dawn for his return to the zoo.Credit:Eddie Jim

Nixon’s grandmother, Karen Child, booked tickets for the zoo’s first day after the end of the state’s lockdown like they were Rolling Stones tickets: when she logged on to the Zoos Victoria website last week, she was number 5549 in the queue.

“I waited and was successful, we’re here on the very first day and couldn’t have wished for more,” Ms Child says.

“It’s just so important for us. Nixon was up at the crack of dawn, busting to get out the door. We come once a month at least, sometimes twice a month. Even for an hour or so. It’s just fun to bring the kids and they really enjoy it. ”

Nixon and Ms Child were among 3000 visitors, mostly Zoos Victoria members, who pre-booked tickets to visit Melbourne Zoo on what turned out to be a cloudless Tuesday. Similar numbers were expected at the state’s other zoos, Healesville Sanctuary and Werribee Open Range.

Families lined up at the gates before 9am on the zoo’s first day open again.Credit:Eddie Jim

It marks the reopening of another Melbourne institution following almost three months shut during Victoria’s sixth lockdown, with thousands more tickets on sale from this weekend as the zoos’ indoor exhibitions reopen in line with restrictions easing at 80 per cent double dose vaccination coverage on Friday. Melbourne zoo will also host a movie series over the summer.

Live music will return to the city on Saturday at Sidney Myer Music Bowl when almost 4000 revellers dance to an all-Australian line-up. Tickets for that sold out in fewer than three minutes.

The Melbourne Cup will host 10,000 attendees next Tuesday, and the Moulin Rouge musical has announced it will hold its long-awaited Australian opening night in Melbourne on November 12.

Melbourne Zoo director Michelle Bruggeman said the primates and the carnivores would relish the fresh wave of human interaction – as would the zoo’s staff, the majority of whom worked through lockdown in the empty zoo. 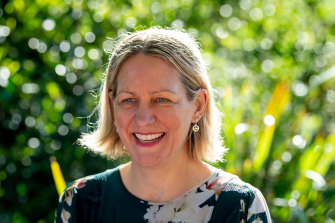 “[For] a lot of our staff it’s business as usual. There’s still grounds to maintain, animals to feed and lots of health issues for animals that we always manage and maintain. Having visitors, the kids and the delight of the animals is just that extra bit special,” she said.

Some positive stories have emerged during the coronavirus pandemic. Melbourne Zoo’s breeding program for the grassland earless dragon, believed to be extinct in the wild in Victoria for over 10 years, has progressed successfully. Three Tasmanian devils were born at Healesville Sanctuary in recent months, as well as an oryx and a zebra at Werribee Zoo.

“And here at Melbourne, our little babies are starting to grow up. The otters are as playful as ever and the snow leopards too,” Ms Bruggeman said.

Tara Softley and Sharni Wood have five kids between them and were the first visitors through the zoo’s Parkville gates on Tuesday morning. 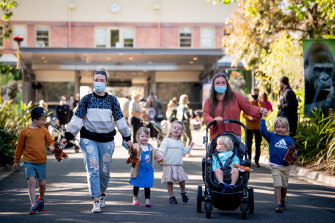 Tara Softley, Sharni Wood have five kids between them, including three-year-old Lola and her unicorn dress.Credit:Eddie Jim

Three-year-old Pippa was most excited for the giraffes, five-year-old Hendrix wanted to make a beeline to the lion enclosure. Lola, 3, arrived in a dress emblazoned with a unicorn.

While it’s been a strange 18 months, Ms Bruggeman reluctantly confirmed we’re not quite there yet.

Man had £15,000 of injections in three years to look like Barbie