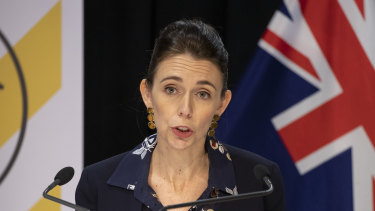 Too much? Too soon? Prime Minister Jacinda Ardern discusses the Government’s COVID-19 response.Credit:Getty

As the number of new coronavirus cases continue to drop, the group of academics said the government's lockdown plan is out of proportion with the health risks posed by the virus.

The group said that from April 22, when the current lockdown period is due to end, New Zealand should drop to "level two" alert.

This would leave Kiwis free to return to work, most schools and universities and businesses would re-open, and leisure activities and domestic travel would resume.

Restrictions on overseas travel restrictions and gathering on more than 100 people would remain in place under their plan, titled "Plan B". 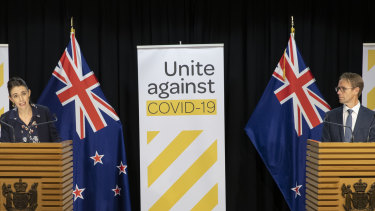 The plan is in stark contrast to the government's current position, as outlined Ardern on Monday. Ardern said even if the lockdown were to be lifted next week it would only fall to level three, with severe restrictions on movement, work and education remaining.

The government would reveal further details of level three restrictions on Thursday, but the PM has likened it to "a waiting room", rather than a dramatic loosening of freedoms.

Under level four all but essential workers are confined to their homes with only a few exceptions for essential travel.

​The government will announce on April 20 whether the country will exit or extend its four-week level four lockdown.

In response to the group's proposed plan, a government spokesman said "the Prime Minister has been clear the best way to protect New Zealanders' health and economy is to stamp out the virus".

"Modelling undertaken in NZ and the evidence we see daily in the news from overseas tells us that significant loosening of restrictions before the virus is under control, as suggested by this group, can lead to our health system being completely overrun, many people dying and doing even greater damage to our economy.

"Those countries that have followed the sort of prescription set out by this group have generally seen surges in cases and enormous pressure placed on their health systems as well as a far greater number of deaths. In contrast, our strategy is seeing a reduction in cases.

"The early success of the lockdown should not be used as a reason to move too quickly."

Thornley said the evidence thus far showed eradication of the virus in New Zealand, the government's stated aim, was not necessary.

"Lockdown was appropriate when there was so little data … but the data is now clear, this is not the disaster we feared and prepared for. Elimination of this virus is likely not achievable and is not necessary."

Thornley said the risk to most working people was low and likened it, for most people, to a seasonal influenza virus.

He said the plan was developed amid concern the government's strategy was over-the-top and likely to "substantially harm the nation's long term health and well being, social fabric, economy and education".

No deaths had occurred among New Zealanders under 70 and much of the modelling related to the mortality associated with COVID-19 was overestimated, the group said in a statement.

The real threat posed by the virus was it would overwhelm the health system but New Zealand's risk was lower than in other countries with higher population density, and the local health system had spare capacity, they said.

"Data shows a large majority of COVID-19 fatalities have occurred in people due to their co-morbidities rather than directly from the virus. Even in Italy only 12 per cent of cases were directly due to COVID.

Kristin Has a Show! Brody Is Married! The Stars of The Hills: Where Are They Now?

Who is Bitcoin creator Satoshi Nakamoto and what is his net worth?