Newcastle is now at the epicentre of England’s coronavirus after infections in the city spiralled by 60 per cent to a rate of 250 cases per 100,000, health officials have revealed.

And surging infections in the North West have pushed Knowsley and Liverpool to second and third worst-affected in the country after a 50 per cent jump in cases in both cities. They now have 246 and 239 cases per 100,000, respectively.

But Bolton, which was at the heart of England’s outbreak for four weeks, has dropped out of the top five after seeing a 10 per cent fall in cases to 180 per 100,000.

The fall in the Greater Manchester town suggests stringent Covid-19 restrictions have begun to take effect, offering a glimmer of hope for other regions facing draconian measures.

Despite warnings of further restrictions, London has no boroughs in the top 50 most infected areas in England, highlighting England’s North-South coronavirus divide. Redbridge has the highest rate at 56 cases per 100,000, after the local authority recorded a 40 per cent spike in infections.

The Public Health England data is based on Covid-19 swabs carried out across the country between August 21 and September 27, and daily indicators up to September 29, which reveal up to one in 14 tests are now positive. Experts fear infections across the country could be higher than the numbers suggest. 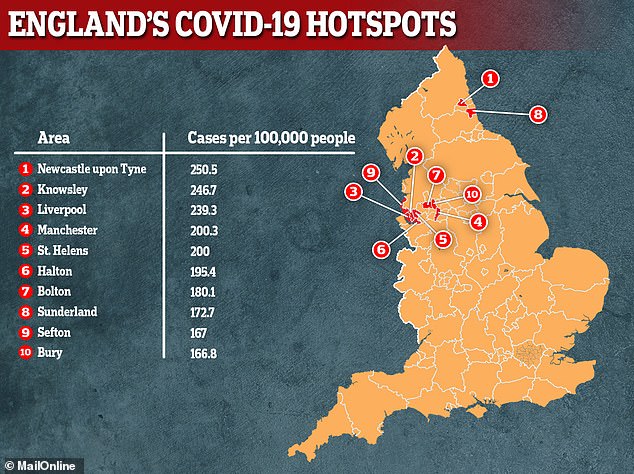 All England’s top ten coronavirus hotspots are in the North, revealing its North-South divide 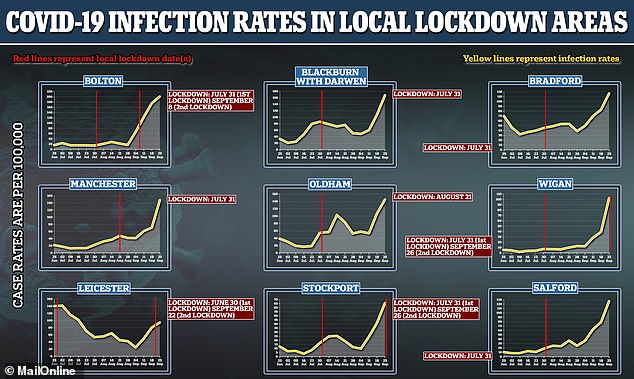 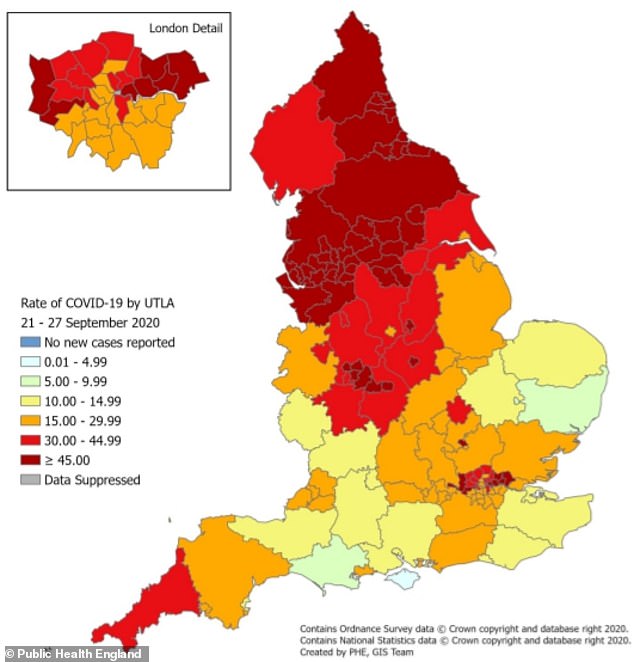 This map reveals areas that have seen the fastest growth in coronavirus cases, with the North seeing the fastest spread alongside some areas of London

Manchester was the fourth biggest hotspot in the country, the data reveals, after cases rose 36 per cent to 200 per 100,000.

And St Helens, in Merseyside, shot up to the fifth most infected area in England after it saw an 82 per cent rise in infections which pushed its rate to 200 per 100,000.

As the country reeled from mounting Covid-19 infections:

Top 15 coronavirus hotspots in the UK

The Government and local health authorities have clamped down with tightened coronavirus restrictions in areas with higher cases, in a desperate attempt to curb spiralling infections.

The rules require people not to attend professional or amateur sporting events, not travel unless essential – such as to school or work – and not to visit care homes except in exceptional circumstances.

The regions follow much of the North West and North East in tightening restrictions amid an ever-growing outbreak in the North of England.

The latest data reveals the stark coronavirus divide between the North and South of England, with 49 of the most infected regions being in either the North of the Midlands.

Experts have suggested that this division is due to a combination of factors including the weather, level of deprivation and differences in levels of immunity between the regions.

The South East and London were the driest, warmest and sunniest areas in the UK in August, according to data from the Met Office, as summer drew to a grim end across most of the country.

Dr Andrew Preston, an expert in infectious diseases from the University of Bath, told MailOnline it was ‘entirely reasonable’ to draw a link between this and spiking coronavirus cases.

It is thought the showers and cooler weather are likely to have encouraged people to spend longer indoors, where the virus is more capable of spreading, in the North. 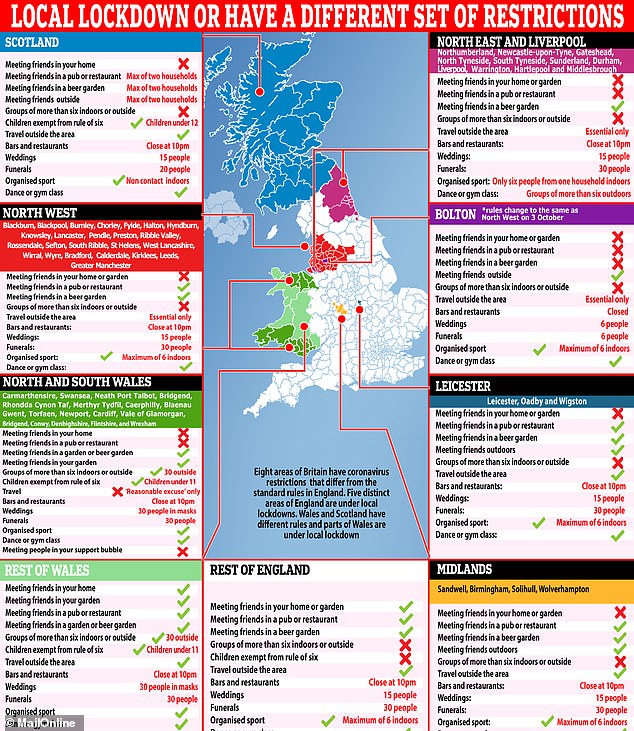 Level of deprivation may have also spurred on a surge in cases, as this would leave people less able to self-isolate or work from home, putting them at greater risk of spreading and contracting the disease.

Middlesbrough, Liverpool, Knowsley, Hull and Manchester, all in the North, have the highest levels of deprivation in the country according to a Government report.

Other experts have said, however, the difference could be down to immunity – with some arguing the virus was infecting up to 100,000 people a day at the height of the outbreak that were mostly in the South.

This would mean it had higher rates of immunity to the virus than the North, putting a downard pressure on any subsequent second wave.

Boris Johnson and his two top scientific advisers wheeled out a striking set of statistics earlier this week that laid bare the different coronavirus outbreaks in the North and the South.

An average 1,595 cases of Covid-19 are being diagnosed in the North West every day now, compared to just 150 in the South West, while Yorkshire and the Humber and the North East face the second highest infection rates.

All of the 10 areas with the worst case-per-person ratios are in the north, while eight of 10 of those with the lowest are in the south. Professor Whitty said there was a ‘heavy concentration’ of coronavirus towards the top of England.

BBC Drama ‘Baptiste’ Returns For What Could Be Its Final Season, With Fiona Shaw Joining Cast