Nicola Sturgeon today confirmed that pubs and restaurants can reopen indoors from Monday – three weeks ahead of England.

The SNP leader declared that hospitality, shops and gyms can get back up and running next week, hailing the success of the vaccine rollout.

Fronting a Covid briefing amid the hard-fought Holyrood election campaign, she said Scotland will move from Level 4 to Level 3 of the five-tier restrictions.

It means customers will be able to eat and drink indoors – albeit with limits – well before it is allowed south of the border, where the loosening is due on May 17.

Ms Sturgeon declared last week that she was stepping up her timetable, with the move ramping up pressure on Boris Johnson, who has insisted he will not move faster than planned. 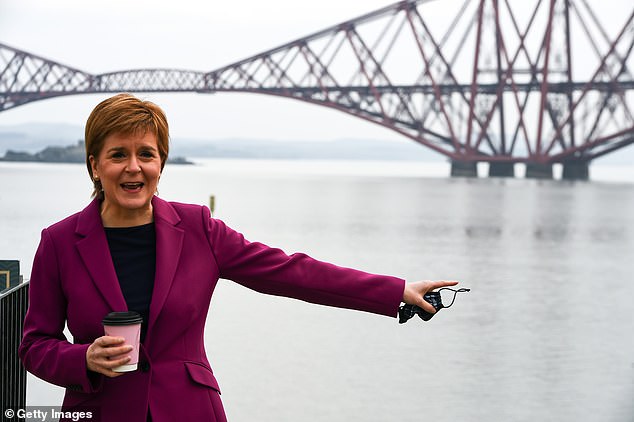 SNP leader Nicola Sturgeon (pictured campaigning in Edinburgh today) declared that hospitality, shops and gyms can get back up and running next week, hailing the success of the vaccine rollout 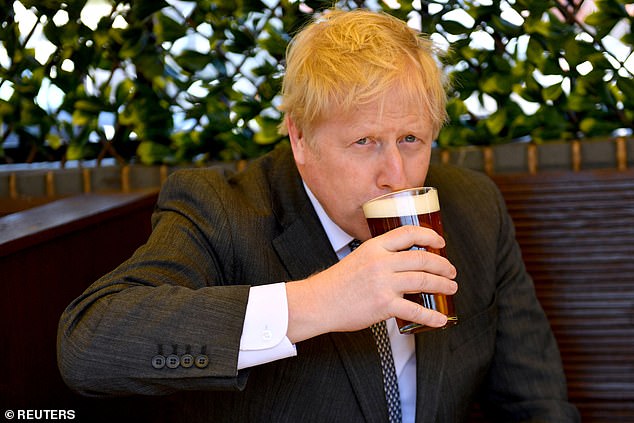 Ms Sturgeon declared last week that she was stepping up her timetable, with the move ramping up pressure on Boris Johnson (pictured enjoying his first post-lockdown pint yesterday), who has insisted he will not move faster than planned

How is Scotland easing lockdown?

All primary pupils returned to full time teaching, and secondary schools on a blended basis

Communal worship also returned with congregations of up to 50 people.

On April 2, the ‘stay at home’ order changed to ‘stay local’, allowing travel within a local authority area.

Hairdressers and barbers opened in Scotland for pre-booked appointments on April 5.

People were able to leave their local authority area for the purposes of socialising, recreation or exercise, though travel between the mainland and some islands is not permitted.

Rules on gatherings were also relaxed, with six adults from up to six households able to meet up outside.

Up to four people from two households can socialise indoors in a public place, such as a cafe or restaurant.

Hospitality venues can open until 8pm indoors – but without alcohol – and 10pm outdoors.

Gyms can open for individual exercise. All shops, stores and close contact services can open.

Funerals and weddings including wakes and receptions can take place with up to 50 people, but no alcohol.

Travel allowed to other parts of Britain.

Up to four people from two households can socialise indoors.

Face-to-face support services (where not possible to deliver remotely) can resume.

Universities and colleges can return to a more blended model of learning.

Up to six people from three households can socialise indoors in a home.

Hospitality can remain open until 11pm.

A phased return of some office staff.

Hospitality will need to close at 8pm indoors, with alcohol only allowed to be served outside, and people will be able to meet others for a meal or drink, with up to six people from two households allowed to socialise in a public place.

Updated guidance is being published on collecting customer contact details, requiring venues to take down contact details for all customers, not just the lead member of each group.

Ms Sturgeon said this ‘additional precaution’ was needed to help with contact tracing in the event of a Covid outbreak.

She also stressed that while people would be able to meet indoors in places such as cafes, it was not yet possible for them to meet others in private homes.

‘I know that can seem illogical, it can seem really difficult and unfair,’ Ms Sturgeon said.

But she said risks of transmitting the virus could be higher in people’s homes, where it is harder to enforce physical distancing and provide the necessary levels of ventilation.

Other changes include the resumption of driving lessons and tests.

Close contact services, such as beauty parlours, can also return.

Funerals and weddings – including post-funeral events and receptions – will be allowed to take place with up to 50 people and alcohol permitted.

Travel between Scotland, England and Wales will be permitted and tourist accommodation can welcome back visitors.

Ms Sturgeon told the briefing that two deaths from coronavirus and 178 positive tests have been recorded in the past 24 hours.

The continued decline in the number of cases, where average daily case numbers have now fallen by more than 90% since early January, means the country could relax restrictions, she said.

Ms Sturgeon said it was expected that all of Scotland would move to Level 2 on Monday May 17 – allowing people to meet in ‘small numbers’ in homes for the first time in many months.

She added that ‘if circumstances permit’ the intention is for Scotland to move to Level 1 restrictions from Monday June 7, before moving to Level 0 in ‘late June’.

The First Minister said that by the ‘deeper part of the summer’ she hoped ‘something much more like normality’ would be possible.

‘We are hopeful, very hopeful, of seeing sustained progress,’ she said.

Ms Sturgeon has indicated she wants a tougher line than Mr Johnson on foreign travel.

The UK government has suggested that non-essential trips abroad will be allowed to resume from May 17, with a ‘traffic light’ system based on countries’ case numbers and variant risk.

Ms Sturgeon stressed that international travel for ‘non-essential purposes’ was ‘not yet permitted’.

She accepted this was ‘difficult’ for tourism and aviation industries, as well as those with family and friends overseas.

‘We want to restore normality to international travel as quickly as possible,’ the First Minister said.

She added: ‘Until at least May 17, and possibly for a period after that, you should not leave the UK for non-essential purposes.’

Ms Sturgeon said this was important to help ‘protect’ the progress made in tackling coronavirus in UK. 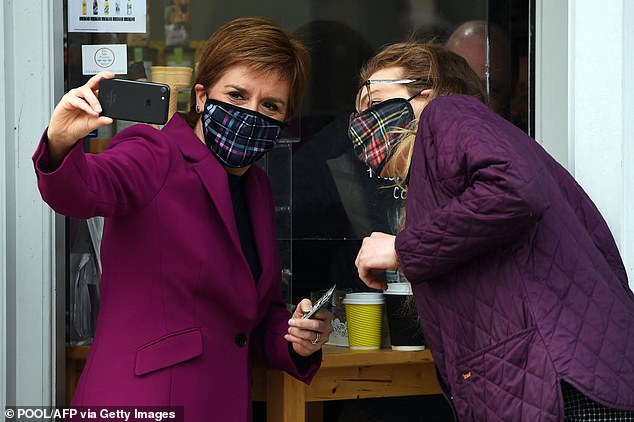