Doug Gurr, UK manager for the US online giant, issued the warning on Friday

Amazon’s UK chief claims there could be civil unrest in the next fortnight if Britain leaves the EU with no deal.

Doug Gurr, UK manager for the US online giant, issued the warning at a meeting on Friday organised by Brexit secretary Dominic Raab.

Gurr implied there could be riots and protests when he made the remarks in front of representatives of Britain’s biggest businesses.

Attendees were said to have raised an eyebrow at his assessment, with some expressing scepticism about Amazon’s forecast.

‘Like any business, we consider a wide range of scenarios in planning discussions so that we’re prepared to continue serving customers and small businesses who count on Amazon, even if those scenarios are very unlikely,’ an Amazon spokesman told The Times.

‘This is not specific to any one issue — it’s the way we plan for any number of issues around the world.’

Mr Raab was scathing about comments from Brussels stating that a no deal scenario would mean there would be no specific arrangements in place for UK citizens living on the continent, or for EU migrants in Britain after withdrawal.

‘I think that’s a rather irresponsible thing to be coming from the other side. We ought to be trying to reassure citizens on the Continent and also here,’ he told The Andrew Marr Show on BBC One. 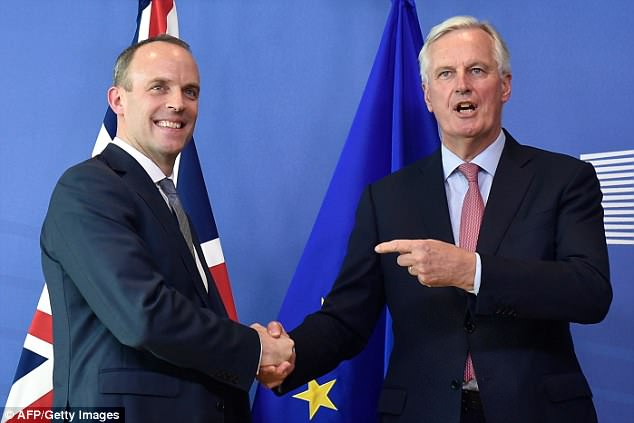 ‘There is obviously an attempt to try and ramp up the pressure.’

Mr Raab said that he would return to Brussels for talks on Thursday and try everything he could to get the best deal.

Asked if reports the Government was planning to stockpile food for a no deal outcome were true, Mr Raab said: ‘No. That kind of selective snippet that makes it into the media I think is – to the extent that the public pay attention to it – I think is unhelpful.’

How Instagram is cracking down on illegal drug sales

Taylor Swift Will Be Allowed To Play Old Songs At AMAs